3TT: BuJo
Give Them Wings: Maddy Mo On The Go!

OK. This is going to be a super random dump of odds & ends that have been swirling in my brain...

It was kind of a crazy long holiday around here, beginning right after Thanksgiving with Maddy's arrival & Viv's visit. We celebrated, more or less (something/anything/everything), all of December, right through Christmas, and continuing with Ann & family's arrival for a few days just before the end of the year. 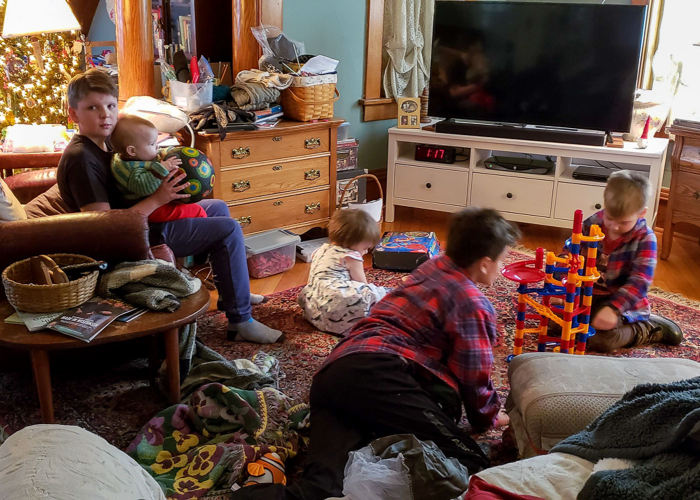 Mack picked up right where he left off last summer... with a baby in his arms! He's so sweet on her. It's adorable! 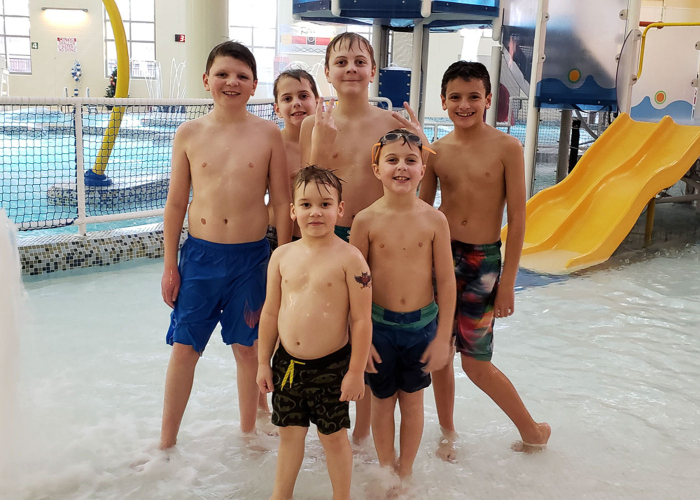 We made two visits to a new-to-us and spectacular indoor pool/rec center while Ann was here, once with Ali & the kids, and once with friends (above). Junah's going to be 5 years old in 5 days... and he looks it, doesn't he?!

We played a lot of Bananagrams! 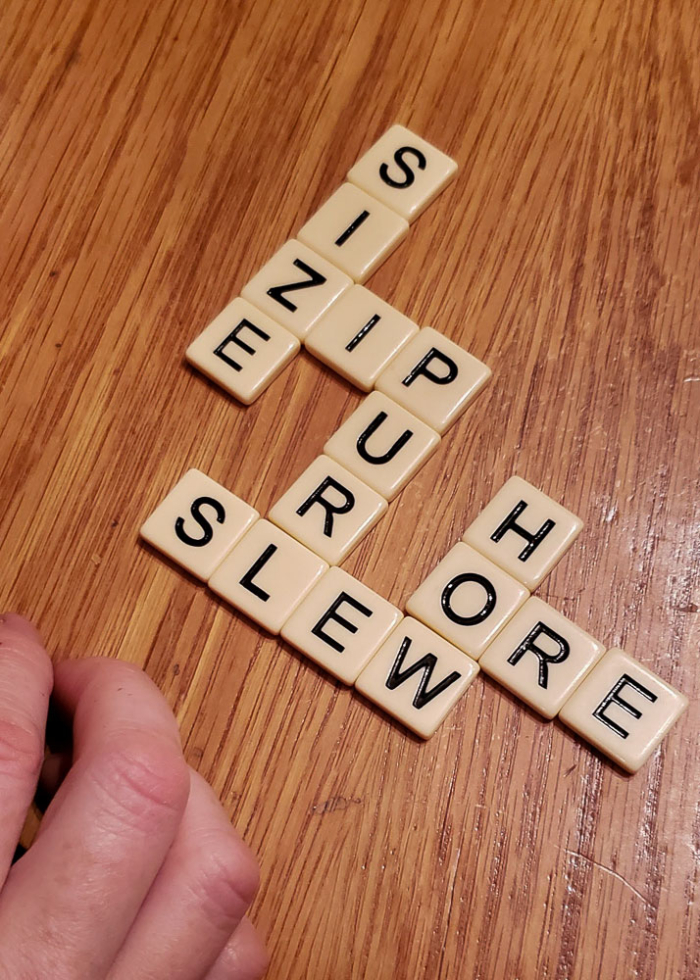 It sure is a fun game. Maddy called me over to see one particular word she'd made...

All day long on New Year's Day, I was thinking "begin as you mean to go on," but I also just needed to chill, y'know? 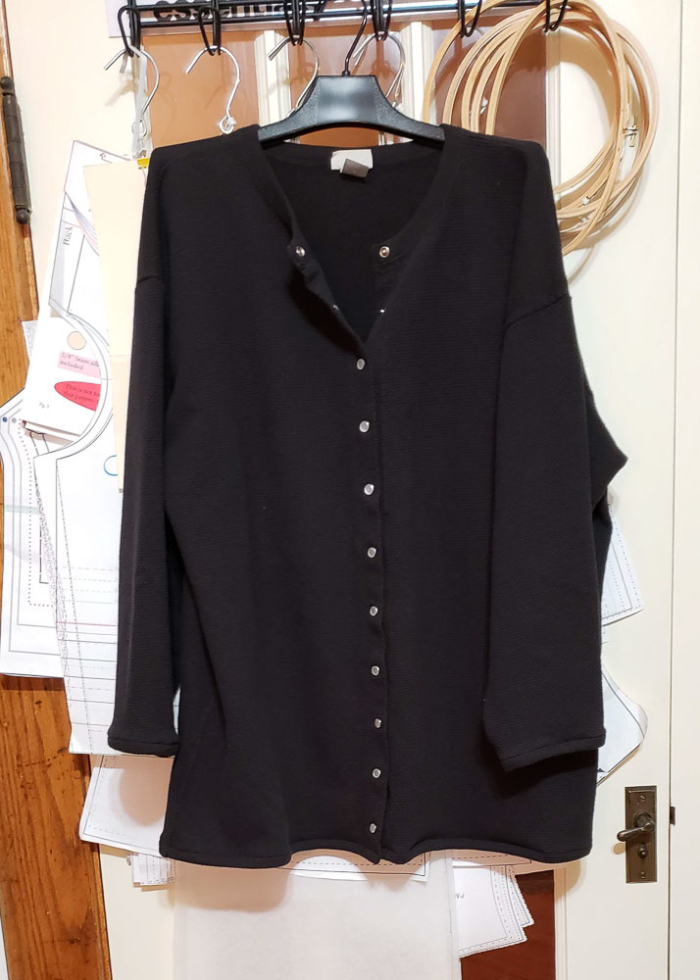 One thing that I did do was the refashioning of a thrift store find -- rescued from the Clearance Rack (at the thrift store, so it was maybe $1.50). I don't know why it was on clearance -- well, actually, yes I do... it had sewn-on ribbing at the hem & cuffs that gathered the fabric and at the wrist and made for a bubble-butt look that wouldn't be flattering on anyone! I really liked the fabric and the size/length and thought for all of one second about whether to buy & re-work it. It took a while, but it was so easy to cut off the ribbing and turn up/sew new hems. I've been wearing it almost everyday since!! 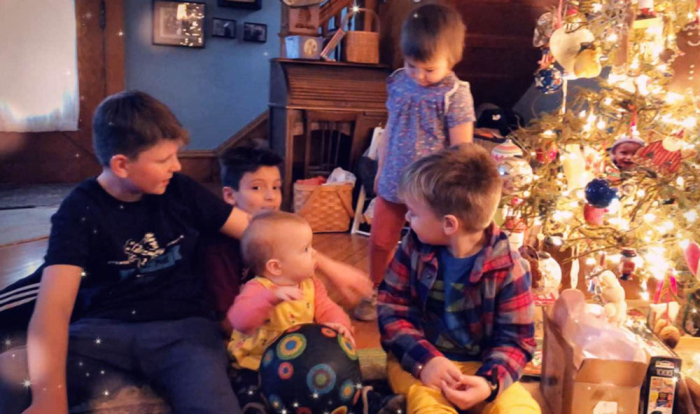 I was pretty awful with picture-taking over the holidays... the one above isn't even mine (credit to Ali!). It tells the story, though: it was a chaotic & fun holiday season with the very best people. ❤️

Finally, the last wrap-up of 2018, I think... my Top Songs on Spotify. My #1 artist was, again, Gregory Alan Isakov, followed by The National, Amber Run, Lord Huron, and Langhorne Slim; and my favorite subgenre was the rather esoteric "Indie Folk."

They made me a playlist of my Top 100 songs... don't let "indie folk" scare you, it's a crazy fun mix of music! I was playing it yesterday and Katie asked about a few songs she was (surprisingly) unfamiliar with, eventually declaring it a "solid" playlist, which I consider high praise! Haha. Anyway, have a listen... maybe you'll find something new to like, too!

Your December-loonngg celebration looks wonderful! I am envious of your musical praise from Katie. Justin always exposes me to new music, some good, some bad, but I've never recommended any of my music to him, nor can I imagine him calling my playlist solid. Something to strive for!

Looks like a great holiday season all around. I didn't take many pictures this year, either, particularly on Christmas Eve when I generally take a bunch. I blame the pneumonia for that one. Your fix on that cardigan is brilliant!

What a fun way to celebrate the last month of the year - full of family, and friends!

And, go you for that cardi fix!

Oh Vicki - looks like y'all had the BEST holiday - so many happy smiling faces (and whoa ... FIVE?! but yes of course ... Charlie will be five this year, too!)!

I'm super impressed you found time to sew! and I love the way your tree shows up in the photos. It just glows!

Happy New Year, my friend ... I hope you're finding time to rest and re-energize!

What a whirlwind of fun and love!!! It sounds like the very best kind of holiday, Vicki. (Alhtough . . . exhausting!) I love the "fix" you made to your thrift shop cardigan. Perfect! And how in the world can Junah be FIVE already????? XO

We sort of had a similar never-ending holiday season that finally wrapped up with a family wedding, and a brunch the day after. I'm not a huge January fan, but I'm like hygge and boring? Bring it, January! Your festivities look like they were good crazy fun, as they should be.

And your new TV table/stand/thing? It looks terrific.

Your wonderful December of family defines happiness. The memories will fill the void of pictures as everyone thinks back on those love filled days. Your thrift shop rescue is great! Happy new year and thanks for taking me along on the journey.

I was a little shocked when I figured out that was Junah standing in front of the group. Wow! He looks so grown up! Your family had the best kind of holiday, moving so fast through the fun frenzy. You were all int he moment, which is as it should be!

PS. I love Indie Folk and your playlist is great!

I need to check out your playlist...maybe at lunch today! (Thanks to you, I've been listening to Gregory Alan Isakov a lot) Jun is looking more and more grown up in every picture.

My favorite though? Mack and the baby!! I love it.

And, fab fix on the thrift store cardi. It looks lovely.

What a great month December was - so full!