3TT: To Do
Right Now: March ahead

Life in the crazy lane

There isn't usually much idle time in my world, but sometimes things really rev up for one reason or another, and I feel like this is one of those times. I'm a go-go all the time-o!

I had off last Friday and started with an early morning eye exam, followed by a visit to my chiropractor, and then zipped home to gather up Gin & Jün and jump into Kate's car for a trip to The Big City! Our destination was the Milwaukee Public Museum. 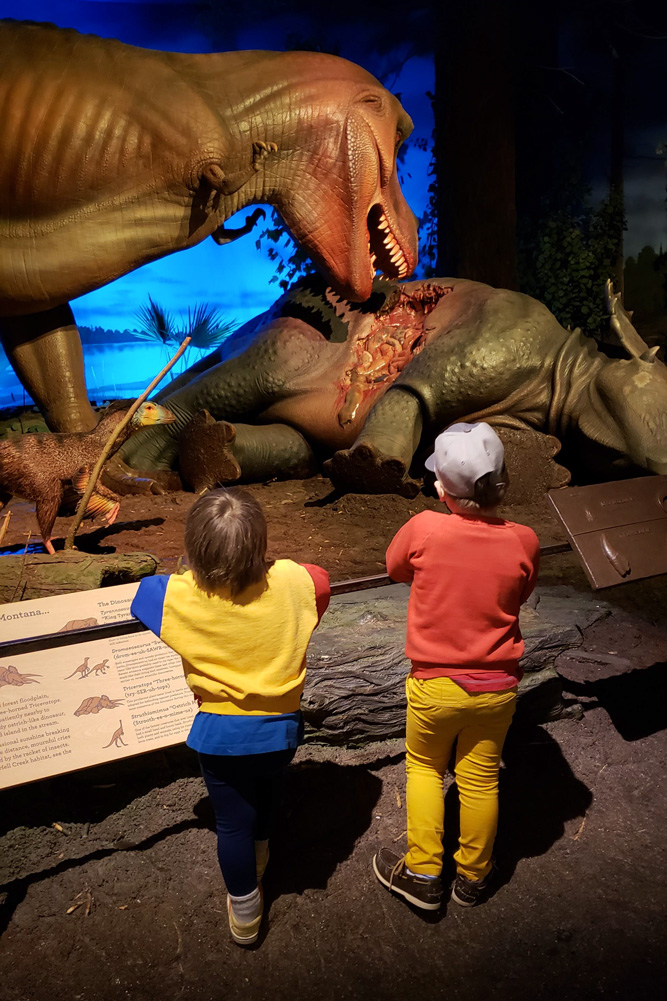 This fascinating if graphic exhibit, punctuated by special effects of the thunderstorm variety, was... endlessly fascinating to these two! And, hopefully, not too traumatizing!

No, wait, it was the ESCALATORS that were even more fascinating. Haha! 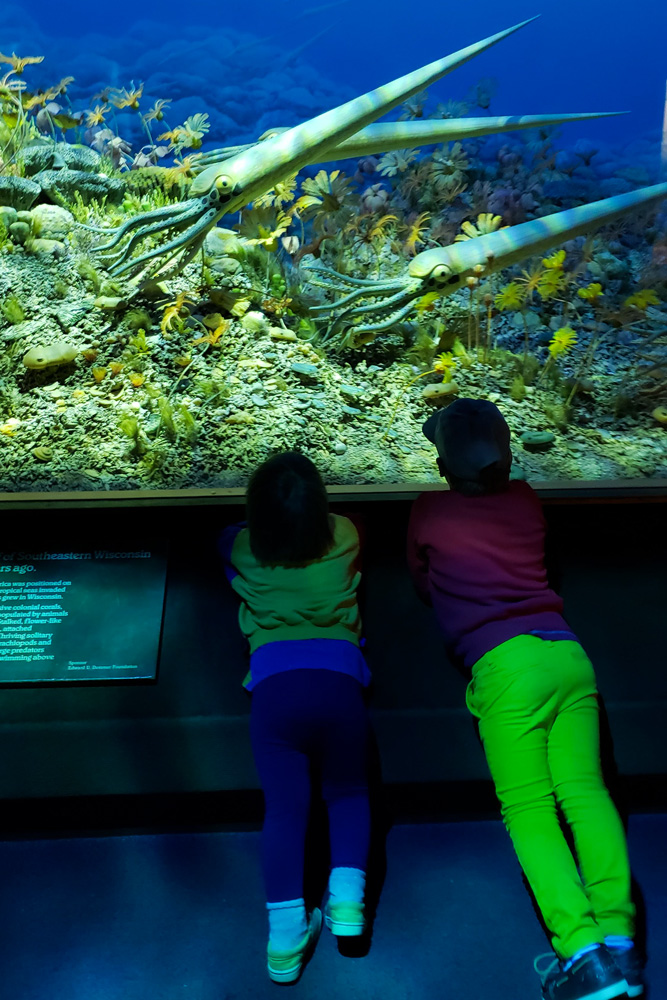 I can't believe I'd never been to this museum before!! 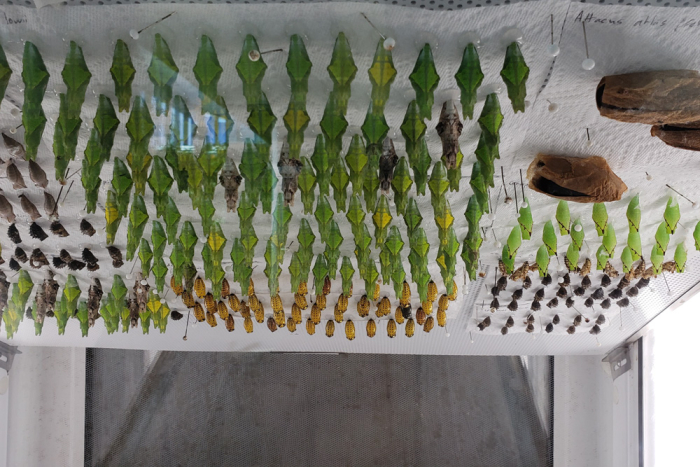 We also enjoyed the butterfly exhibit. And this ^^^ was just incredible to see!

The museum also has an "Old Milwaukee" exhibit with a trolley car, cobblestone streets, and shops. It morphs into the "European Village" exhibit wherein each house, room, or shop is decorated in the traditional manner of a different country.

I was more than delighted to see plentiful knitting in the Latvian Room! 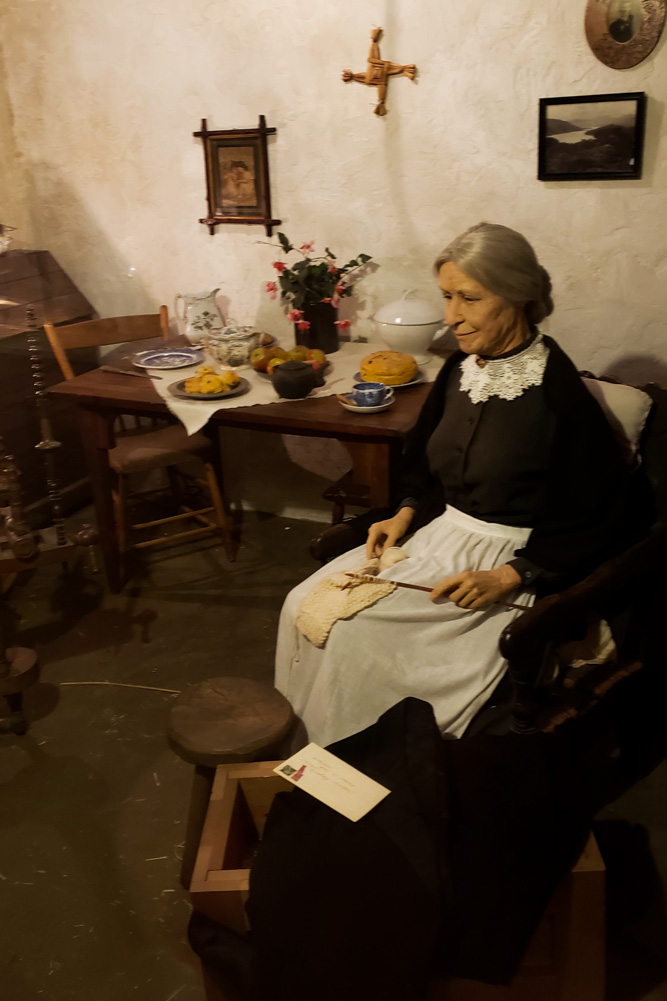 There was also knitting in the Irish House. You can see just a bit of a spinning wheel to the left. And I noticed St. Brigid's Cross on the wall as I cropped the photo! There was knitting/spinning evident in other rooms, too.

The kiddos stayed overnight on Friday because Rod had a gig out of town that came with a free hotel room, so Ali spent her first night without the kids in nearly 11 months! (The other grandparents had the baby.)

Saturday was Day 1 of the Best Picture Festival, which began with a screening of all the nominated Live Action Shorts. Holy moly. The BPF wraps up this Saturday and begins with screening the Animated Shorts. They had adorable "OSCAR" statues made of balloons flanking the theater entrance, and handed out ballots at the end of the evening so we can all play along at home.

In other news, I'm knitting a sweater for Malina. 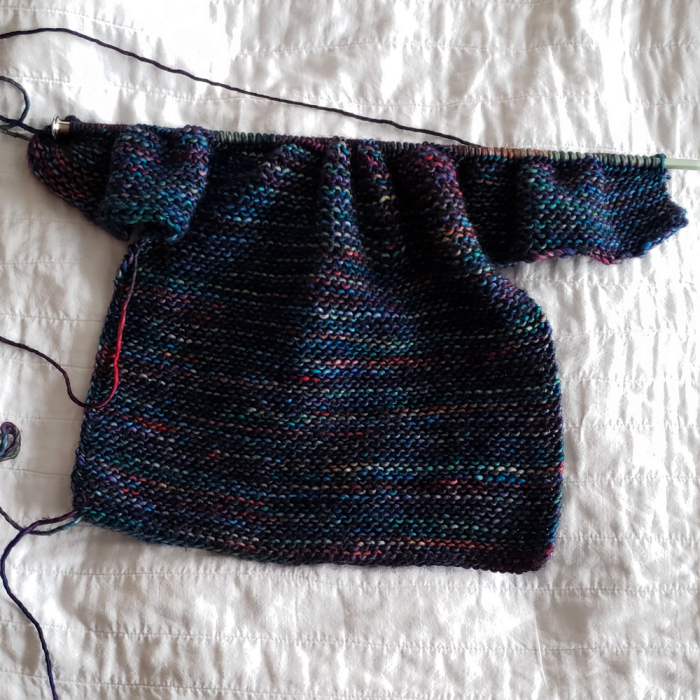 It's in Malabrigo's WASHTED which I purchased at my new LYS, Casting On. If the sweater is a little bit big -- perhaps fitting her sister -- I won't really mind. I did rip & re-do the sleeves last night, though, as it looked as though I was knitting for a baby gorilla! 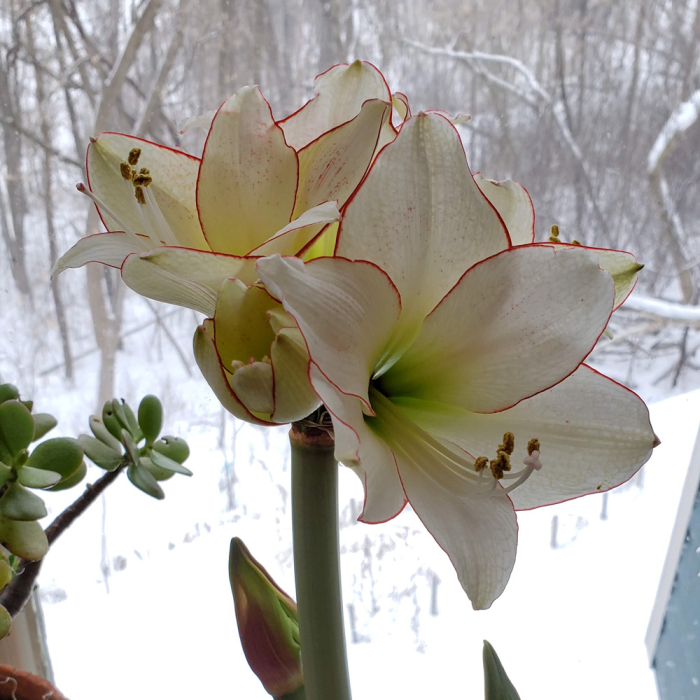 Lastly, I'm going to blast you with amaryllis photos. There are four flowers in full bloom and another just opening. There is also another bud coming up. 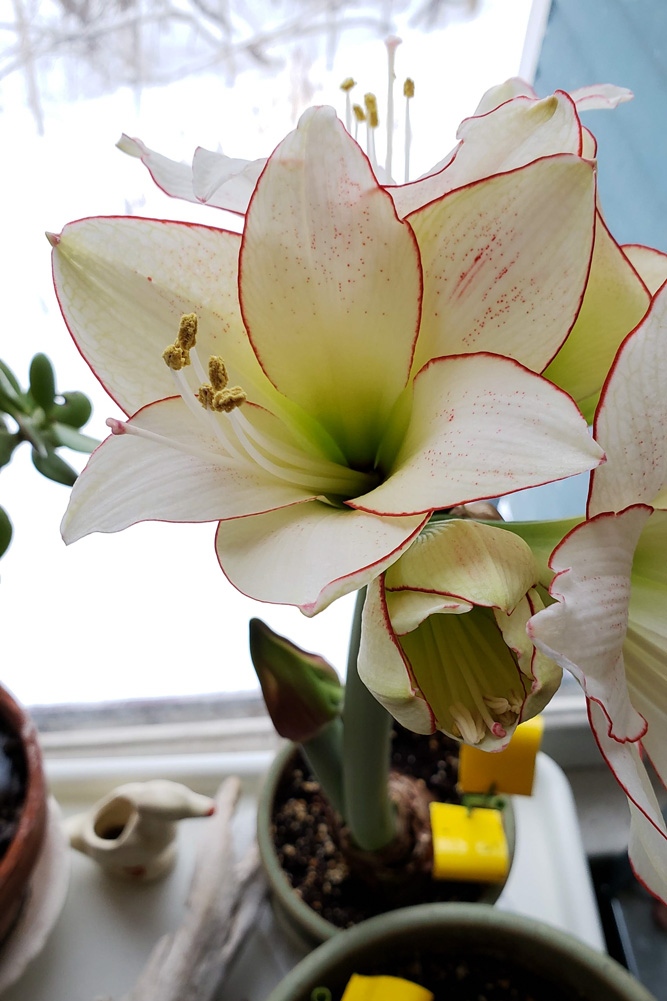 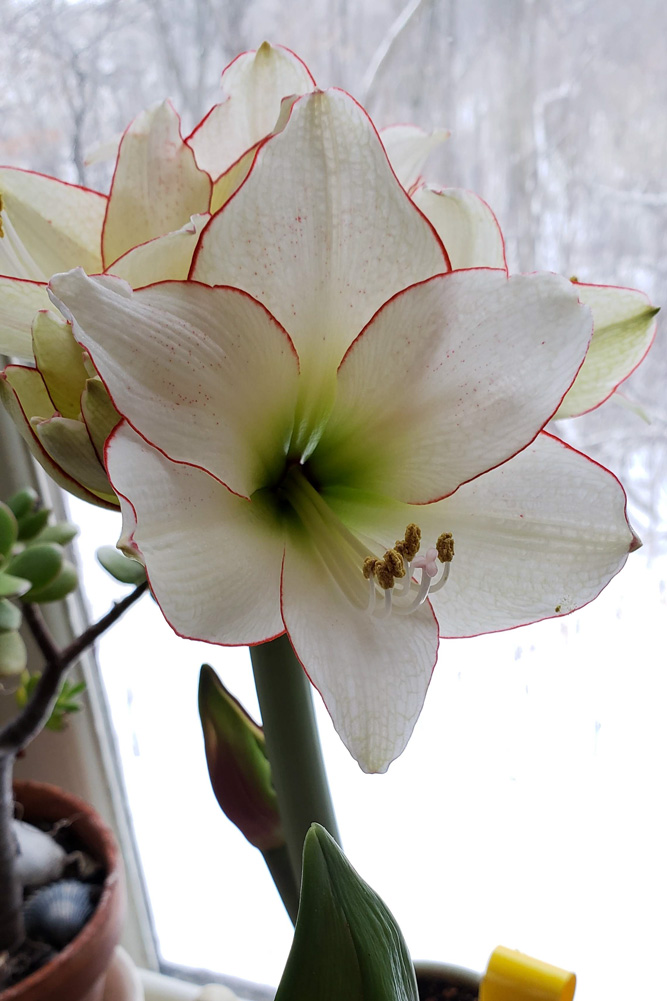 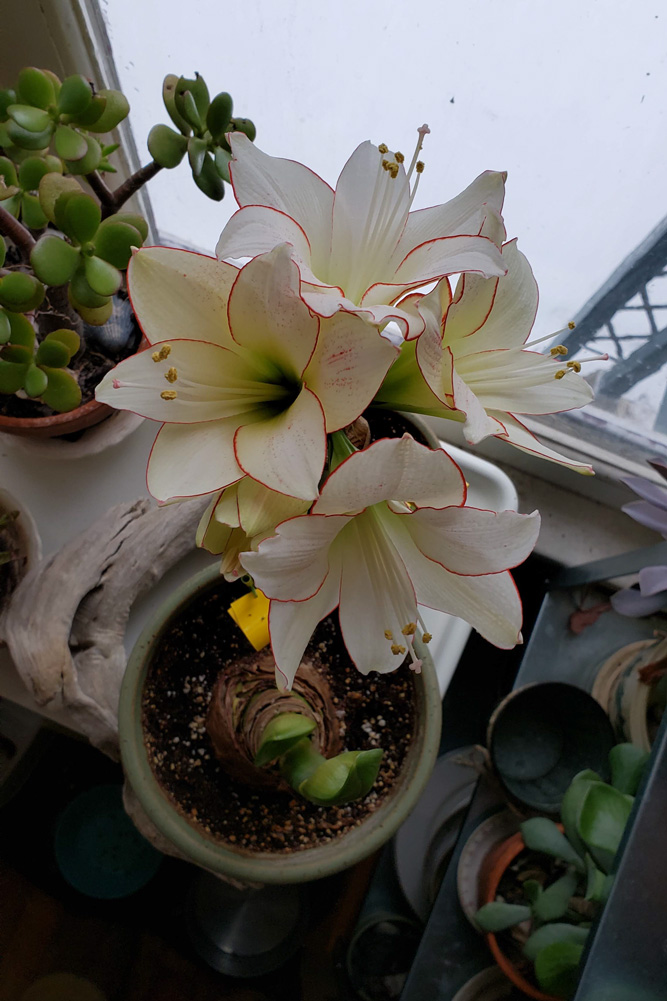 This plant is much smaller and daintier than the big ones I'm used to from the grocery store or wherever. It's just stunning. In the last photo, you can see two bud stalks from the larger plant that have also finally started to grow. So exciting.

Our Airbnb guest checked in on Monday and sent me a wonderful message about how beautiful the place was and she could move right in... that's always the stick by which we measure, too! Whew.

I can hardly believe we're mid-week and March is right around the corner. Ya-freakin'-hoo.

That is a very cool museum, great Malabrigo yarn, and a very special amaryllis! I'm glad you took some time to tell us about all the wonders going on in your world!

That Malabrigo is gorgeous, probably a gorilla wouldn't notice that so good you ripped back. The dino diorama was a full-disclosure sort of thing, wasn't it?!

I absolutely love that museum in Milwaukee - one time when I was there we watched an earthquake happening on the seismograph! And, go you on your AirBnb success!

What a great museum -- and fun for all of you! :-) I love that amaryllis! I had one of that variety last year, and I wish I'd ordered another this year. It's just stunning with that red outline! XOXO

Whew! You are busy/moving fast. But, fun with the kiddos - what a great museum. Malina's (or Gin's) sweater is gorgeous - love the colors in that. Your Amaryllis is a STUNNER!

I'm not surprised at all, but congrats on the AirBnB win. I think we all might just want to move in - lol.

March, March, March! YES! The amaryllis is amazing and with more stalks and blossoms to come! WOW! It's like this museum and you in mind with St. Brigid AND Latvian mittens. I love how rapt the kids are on the exhibits. Sounds like it was the perfect place for you all to go on a free day.

Ooh, love Malina's sweater. (That's the best variegated yarn, in my opinion -- the kind that spreads itself out so you get heathers rather than pools.)

Wow, so much good stuff, Vicki! Especially love the museum trip with the kiddos ... and that amaryllis. Stunning!

That museum looks fabulous and hooray for Ali getting a night away with Rod! Your amaryllis is truly stunning. My 3 are finally showing signs of growth, they were definitely slow getting started.