Let the recap begin! I may test the limits of both Typepad and my readers with the number of photos in these posts!

Our vacation was basically in three parts: Quiet - Crazy - Quiet.

Right off the bat, we were delayed about 5-6 hours when there were issues in Chicago... something about the jet bridge bumping into the plane, leaving a 1mm dent in the fuselage, and though everyone (ground crew, etc.) was OK with it, someone didn't want to sign off, so it ending up requiring approval from HQ in Toulouse, France (where it was the middle of the night, of course). So stupid -- and something that should never have happened in the first place. We were all lined up and ready to board... then we all sat down (thank god for knitting) and then the vouchers appeared. Finally underway, we missed our connecting flight in Madrid. Thankfully, we were fairly quickly booked on a train; re-bookings didn't appear to be going smoothly for everyone on our flight. We had to make our way to the Atocha Station, and I was really glad that I'd been there/done that before! I haven't been in too many train stations, but Atocha has to be among the most beautiful!

We finally made it to Valencia, hailing a cab from the train station to Ann & Brian's apartment. We all immediately ran out to look at some of the falla being constructed and to get some food & drink. Firecrackers were going off all around us -- all around the city -- day and night! Incredibly (I wouldn't have believed it), after a while, it all just becomes background noise. Anyway, much more on Las Fallas later.

We'd made the majority of basic plans & bookings during the holidays when we were together. Originally, we'd hoped to visit Bilbao and Santander, but flight schedules didn't work very well, so we shifted to westward... as far west as we could! We flew into Santiago de Compostela on Thursday, rented cars, and drove out to Cabo Touriñán -- it's the most northwestern point in Spain! 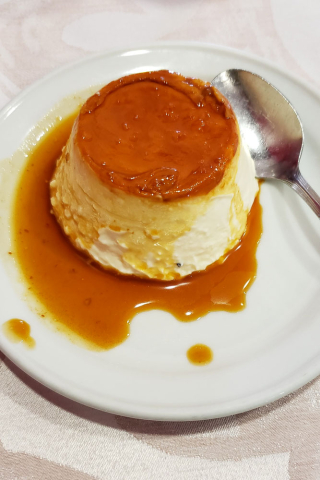 We stopped at Restaurante Leandro in Santa Comba, along the way, for lunch. Ann is a big fan of both TripAdvisor and anyplace with a menu del dia (menu of the day). Typically, it's offered for the mid-day meal, generous servings at a very reasonable price, and includes a few choices for each course, along with dessert and wine (or water). We had a very fine meal on this day, which concluded with this stellar Flan de Queso! It set the dessert bar very high for the entire trip (never quite to be reached).

This was the view from our Airbnb. Oh, what a joy that was! There's a small group of sheep right in the middle of that photo (perhaps if you click, it'll will enlarge enough to see them). Rusty couldn't stand it, and immediately took off to explore the shore!

Maria and her daughter, Alba, were our hosts. Maria greeted us, not speaking a word of English, and my Duolingo lessons didn't really get us too far! Ann & Brian were a bit behind us, for some reason... never mind, somehow we communicated the important stuff! Alba spoke a little bit of English, and the boys are quite good with Spanish these days (Ann & Brian, too, but the boys even more). I got comfy and decided to try out some of my Spanish words, Ann es mi hermana. And then I tried to say something about Brian being Ann's esposo, which garnered laughter from everyone, so I'm sure I didn't do that right... heh.

We settled right in... some following Rusty's lead, others heading into town for provisions.

We observed some very interesting things at this house in the north of Spain.

On Friday, we hopped in cars and did a bit of exploring. This part of the trip was a big question because Ann & fam don't usually do "road trip" vacations, mainly because the boys get antsy and sometimes Mack suffers a bit of carsickness. Luckily, we weren't going too far! 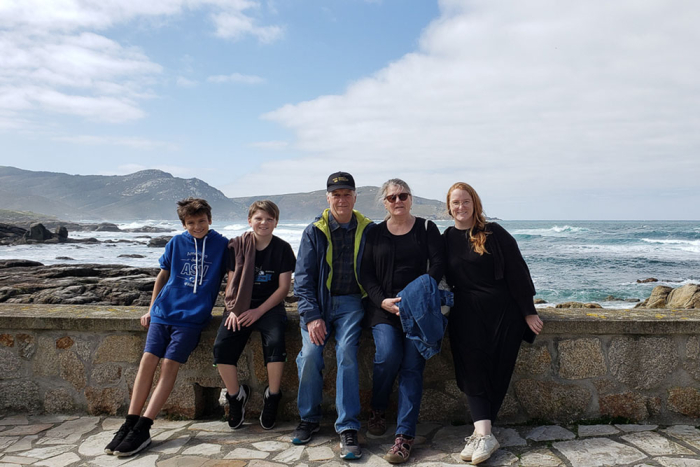 First we headed up to Muxía. There was a street market happening, so we just parked and got out to explore. There were lots of rocks to climb on, and treasures to be found.

We hopped in the car again and drove down to Fisterra on Cape Finisterre (Land's End). Most of our stops in Galicia are points along the Camino de Santiago (the Way of Saint James). 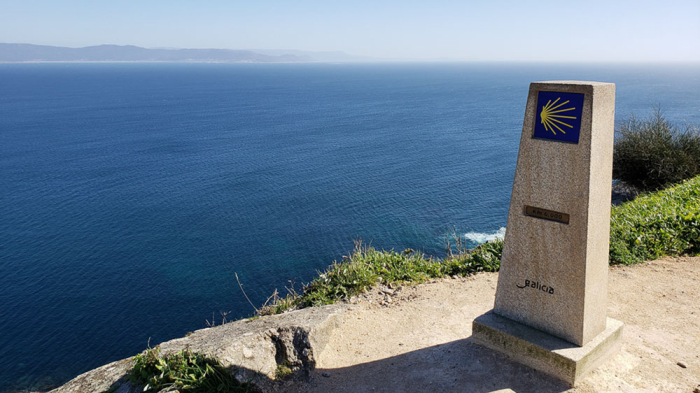 These markers show the way... this one happens to be the 0 km marker at Finisterre. 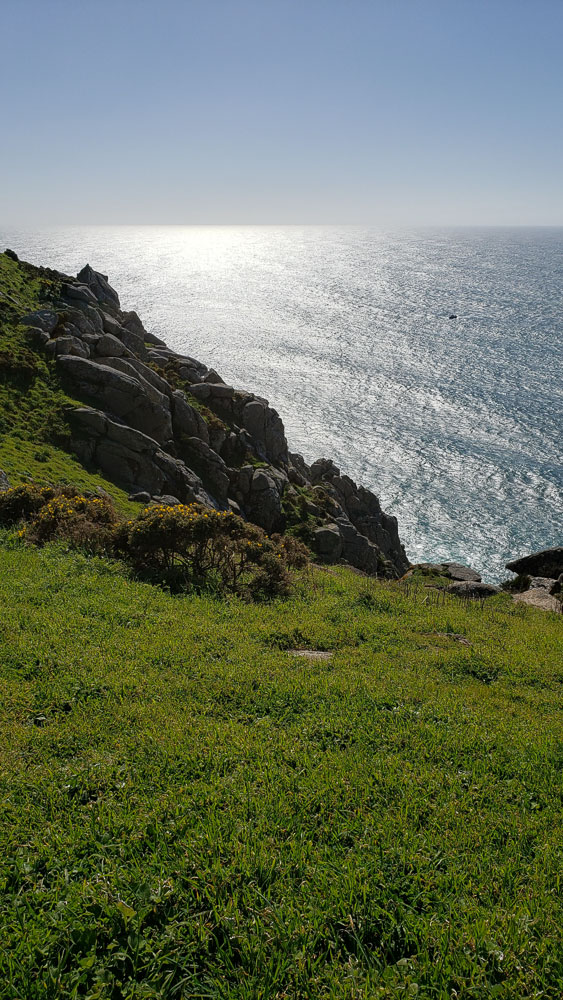 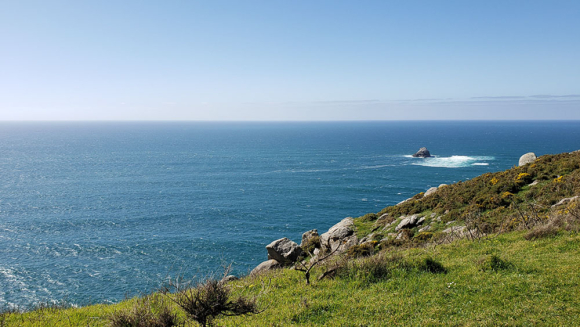 We found some refreshment at the cape: 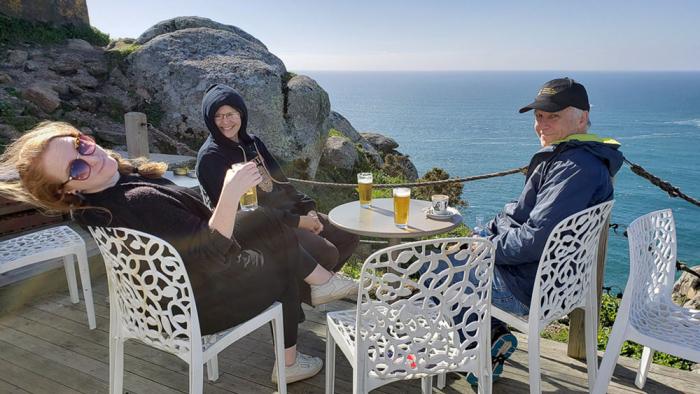 And food in Finisterre. Ann had O Pirata on her list and we were not disappointed! 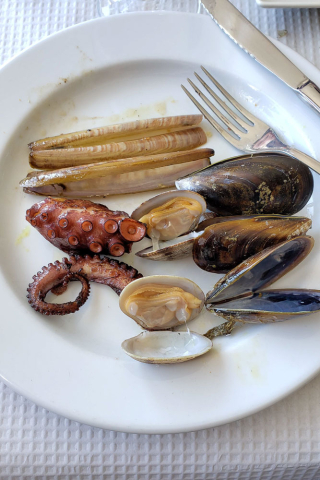 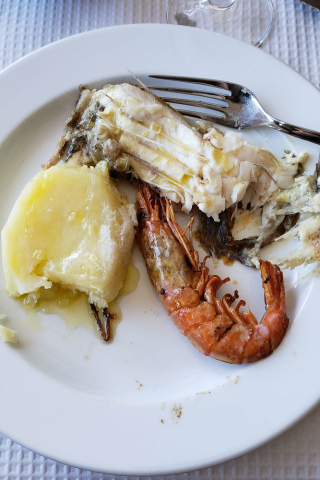 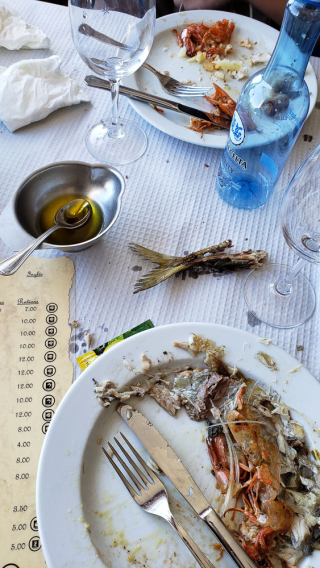 Everything was super fresh, well prepared, and so tasty!! We basically had a customized menu del dia, made just for us. Plus, some of the best bread any of us have had in a while. It was cool to see a fisherman come in with his bucket o' fish to sell.

Another interesting thing we saw in Galicia were these: 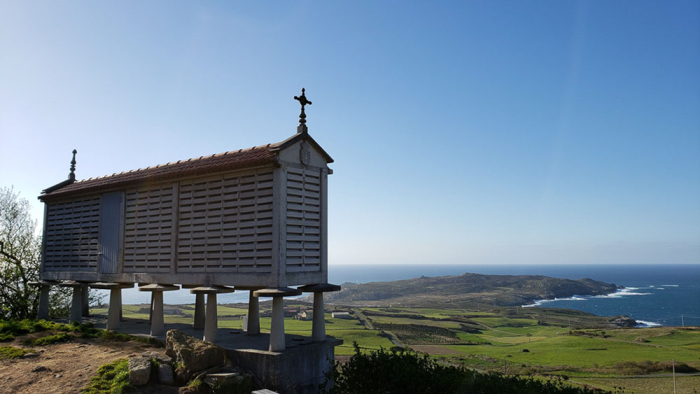 They're everywhere -- in the villages, in the country -- all long and narrow, on "mushroom stilts" (that's what we called them), with ornaments at each gable end, one of them always a cross. Some were higher, lower, older, newer... 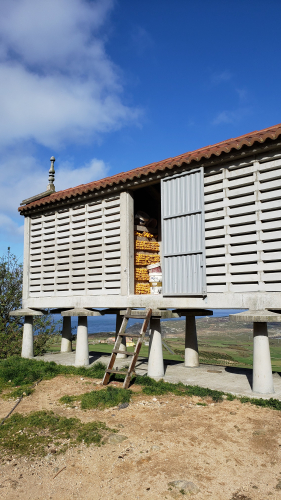 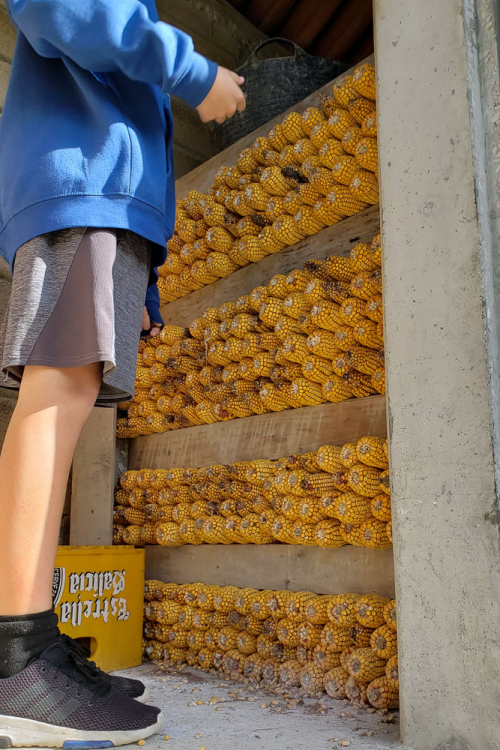 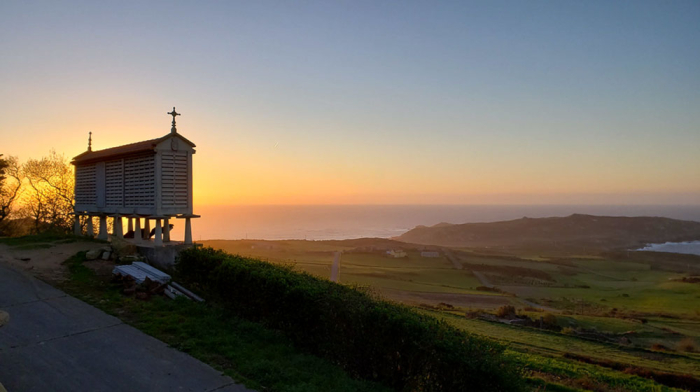 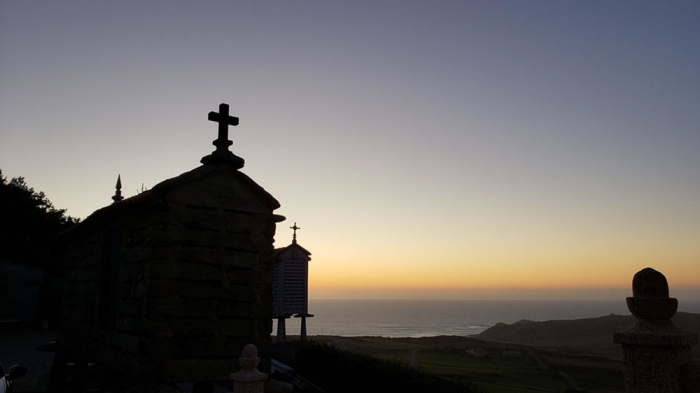 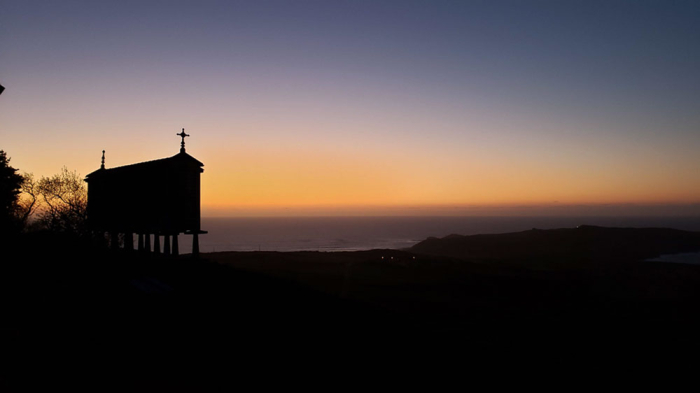 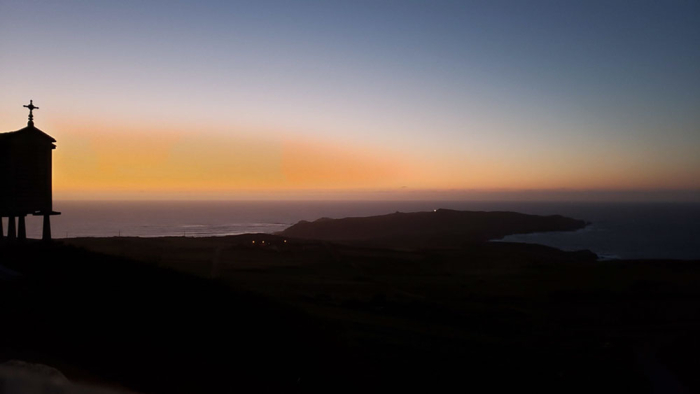 Stunningly beautiful corn cribs. That's the light from the lighthouse visible at just right of center, above. 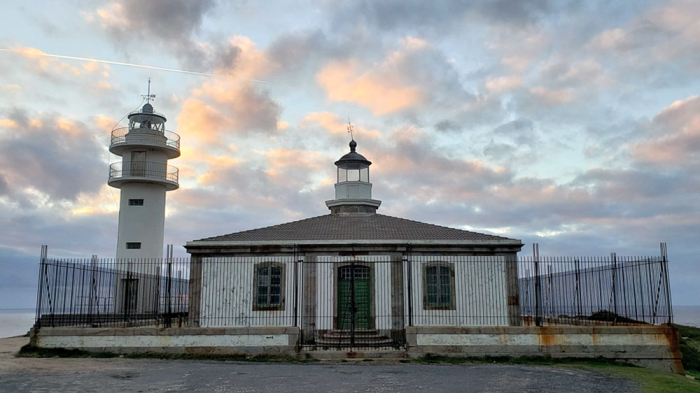 We all went out to the lighthouse at various times, on foot or by car. It was peaceful and lovely. 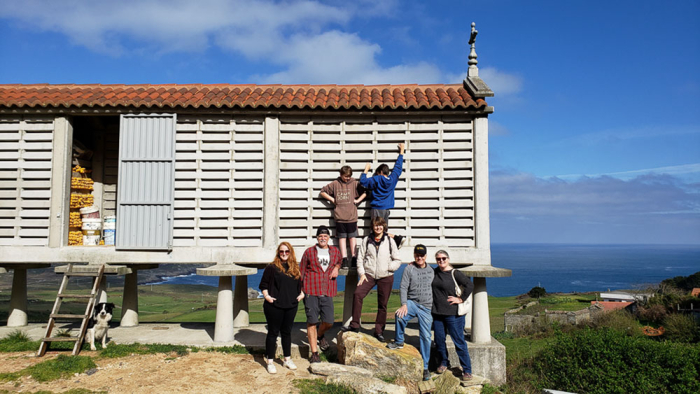 I'd definitely return... there's so much more to explore!

Santiago de Compostela was our destination on Saturday, but first we made another quick run up to Muxía. I remembered that there was a church site there that I'd wanted to visit! 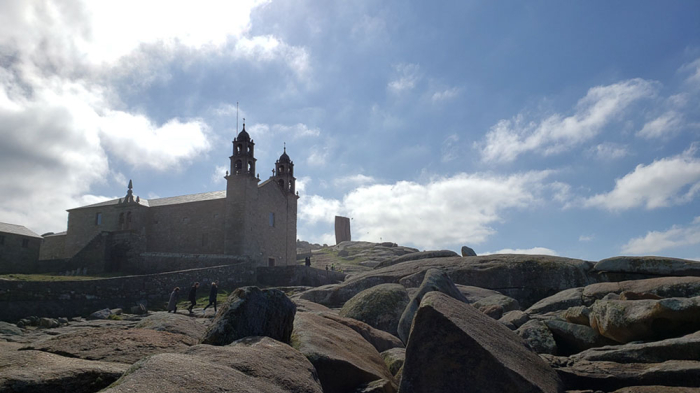 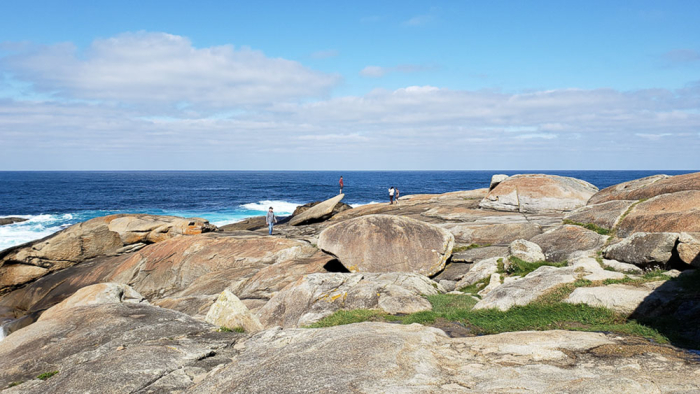 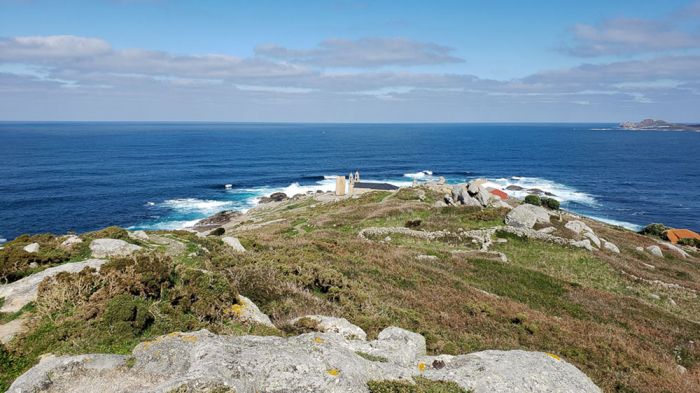 Nosa Señora da Barca (Our Lady of the Boat) is sited beautifully. The church was nearly destroyed in a fire several years ago; the structure has been restored, but the interior is "representational" -- a large photo backdrop of the altar. It was the entire site the intrigued me... the church, the unusual stones (the boys really enjoyed climbing), and the sculpture. 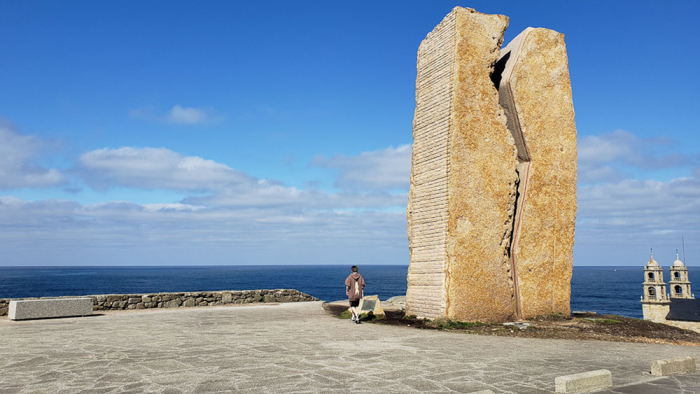 A Ferida ("The Wound") by artist Alberto Bañuelos is in remembrance of the Prestige oil spill that poured nearly 18 million gallons of oil into the ocean off the coast of Muxía in 2002. We could still see evidence of oil on coastal rocks... that doesn't ever wash away.

We had just a quick overnight stop in Santiago -- mainly to visit the Cathedral, which was a nice walking distance from our Airbnb. 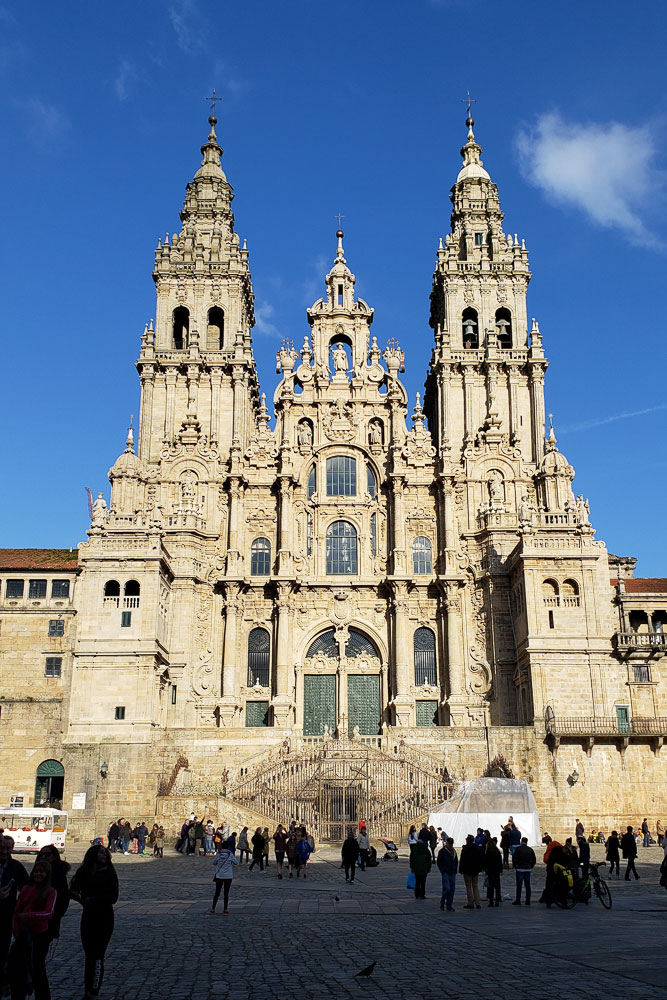 A 5-year-long restoration of the exterior was completed last summer. 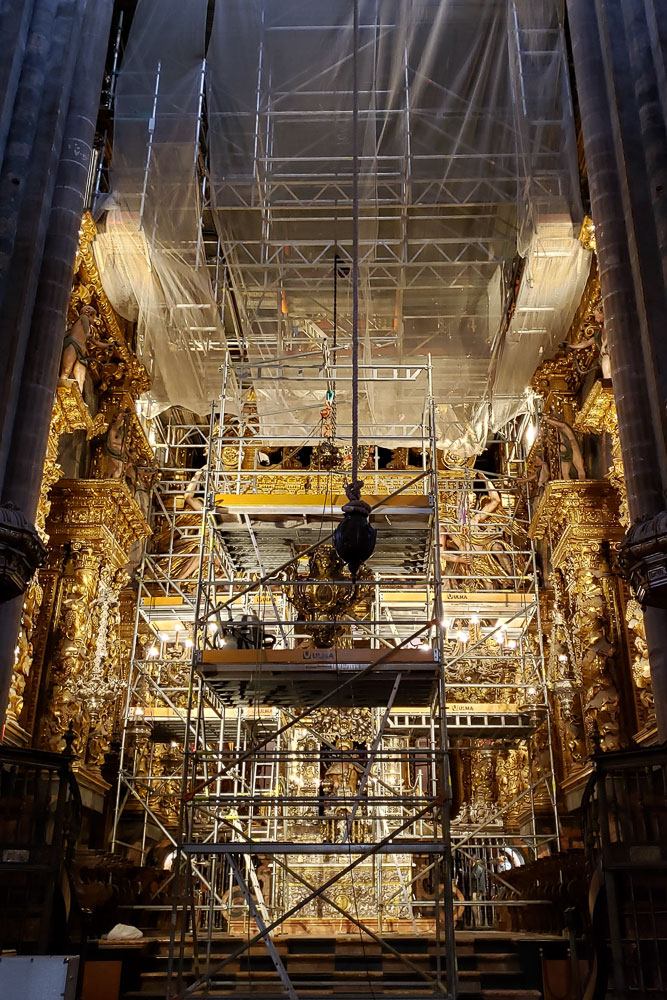 Now happening on the interior! There wasn't much to see, but it was still quite fascinating and... GOLD! Very gold. Even with all the scaffolding and draping, it GLOWS! This will continue for the next year, all to be complete in time for the Holy Year 2021.

We returned cars and flew back to Valencia on Sunday!

Stay tuned for the spectacle that is Las Fallas -- Part 2 to come!

Wow! What amazing images, Vicki! Those corn cribs are just incredibly beautiful! And, thinking about no dryer - well, it has merits! I can't wait to see installment #2!

Oh-wow-oh-wow-oh-wow! That looks just wonderful, Vicki! And those corn cribs? Most charming little (functional) structures ever. The views are amazing! Thanks for taking us along. XO

I was hoping you would do a recap sooner rather than later; this is wonderful and has me looking forward to more! I also want my own holy corn crib, but I'm afraid the squirrels would get into it. I don't know whether I'm more impressed by the rocks at Our Lady of the Boat or Santiago Cathedral, but it's all beautiful and I thank you for sharing!

What gorgeous photos. Those corn cribs!! The food!!! The cathedral!!! What an amazing time. Thanks for sharing - it just all sounds so wonderful. How did you like driving over there?

Your photos are marvelous, you really captured the scenery beautifully. Like everyone else, I love those corn cribs and the shots of those are truly spectacular. I have a technical question - how did you include more than 2 snippets per day on your vacation video?

Wow! the sights, the food and drink and the company ... what a wonderful beginning! Thank you so much for sharing it all with us!

You travel to amazing and beautiful places. The fireworks displays stun! They went on and on! What an experience! The corn cribs, the cathedrals, the ocean views. All of it is hard to imagine for this armchair traveler. The feeling of open air, of unique beauty and experience come through. Thank you, Vicki!

Back when I took an architecture course as part of my art history degree, Santiago de Compostela was one of the frequently referred-to cathedrals. I think it was an example of Romanesque architecture; they really, really junked it up with the Gothic and Baroque additions.