Las Falles is... incredible! And impossible to "sum up," but I will give it a go. I shared a few posts on Instagram along the way (there's one linked later in this post), and the hashtag #falles2019 (or #fallas2019) are pretty great.

Las Falles is the biggest celebration in Valencia, held annually March 1-19 in commemoration of Saint Joseph... and/or spring. What it actually has to do with Saint Joseph and how/what this spectacle actually commemorates/relates is beyond me. 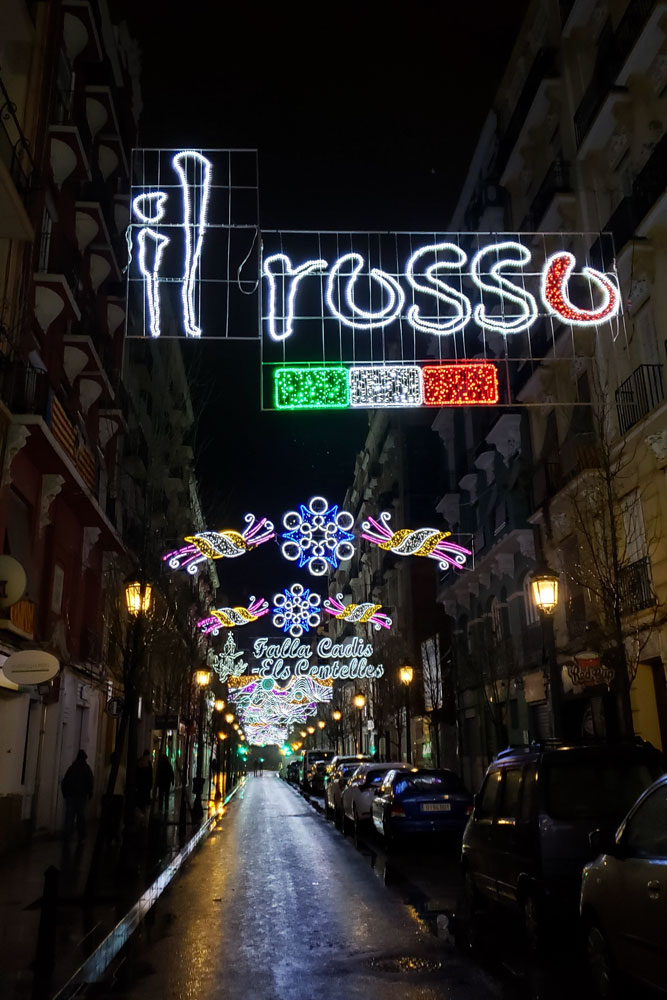 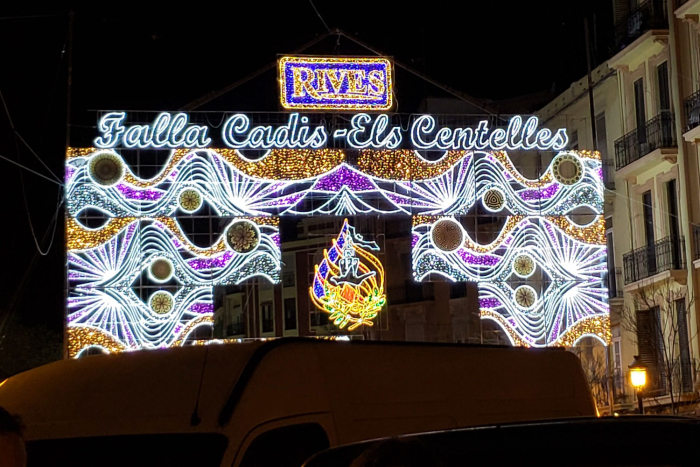 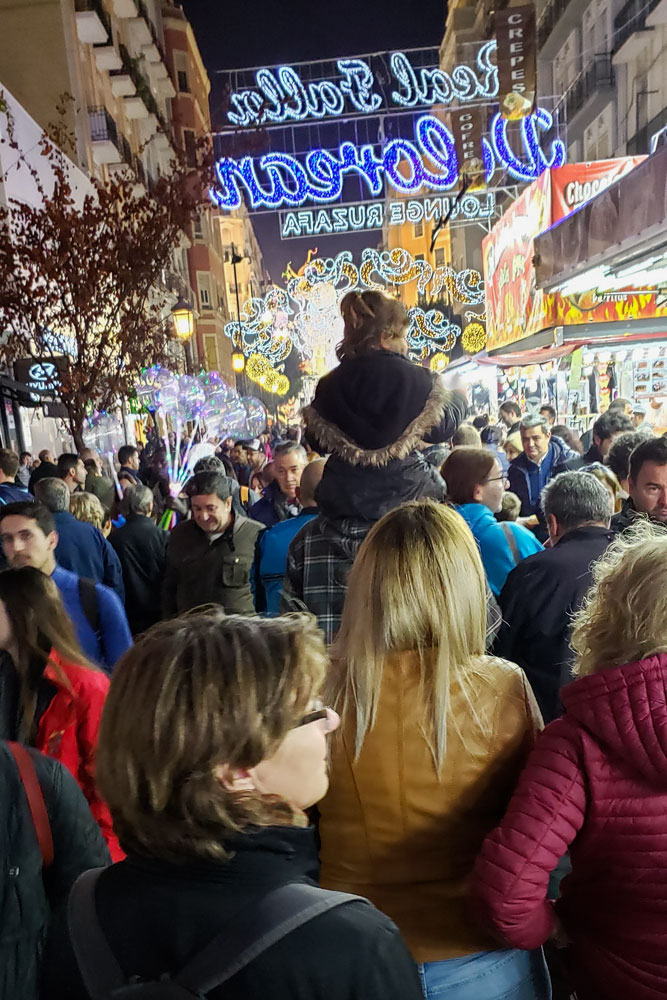 It's a party! Pure and simple. And it has many facets, not the least of which is noise and fire. It's a slow build, hitting a crescendo during the last five days/nights. That's when the falles appear. 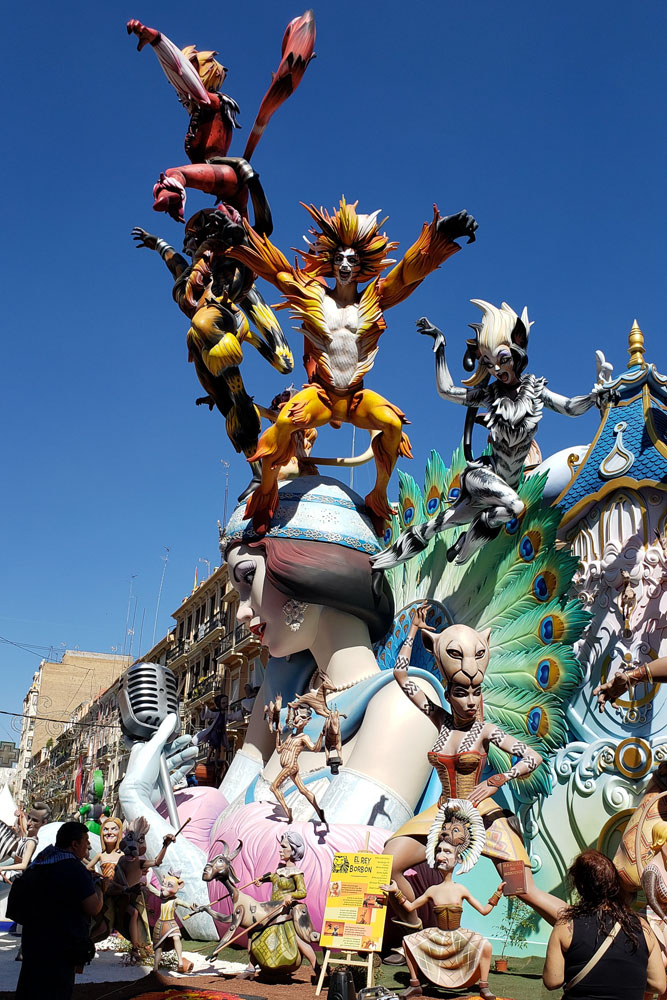 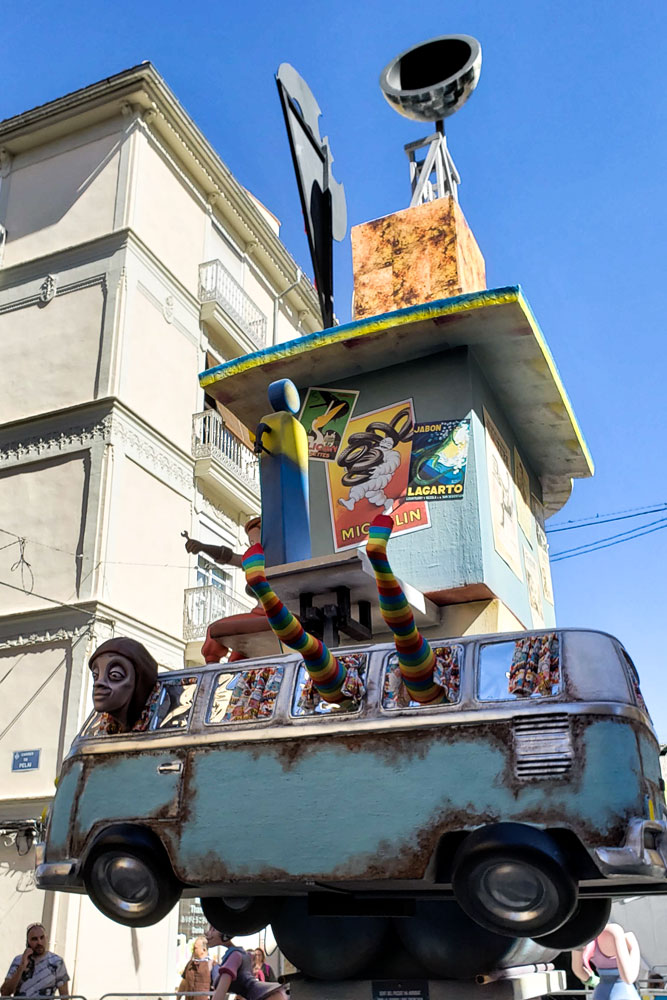 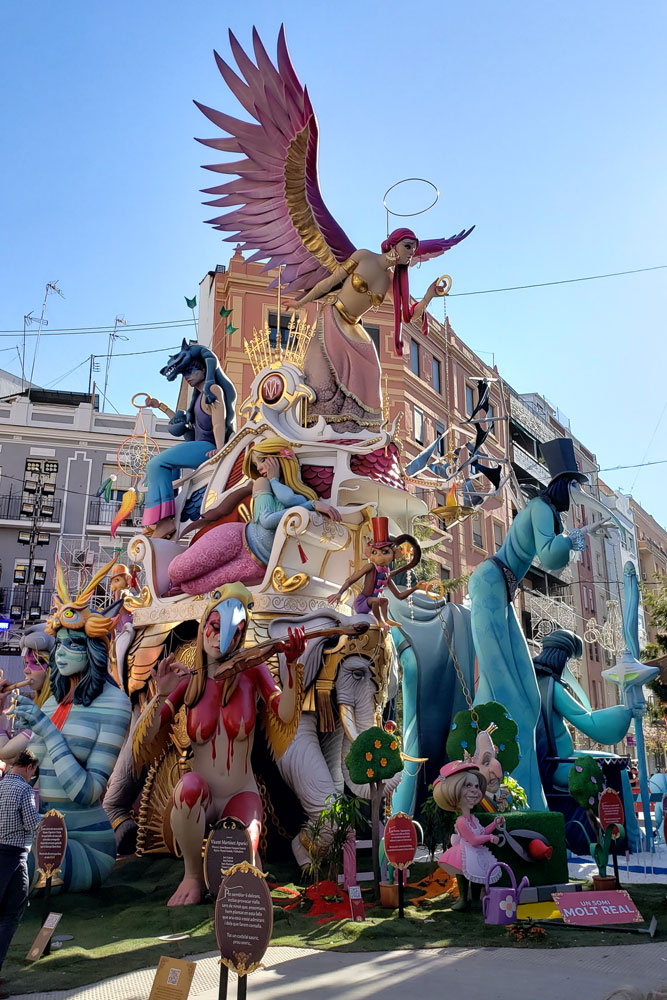 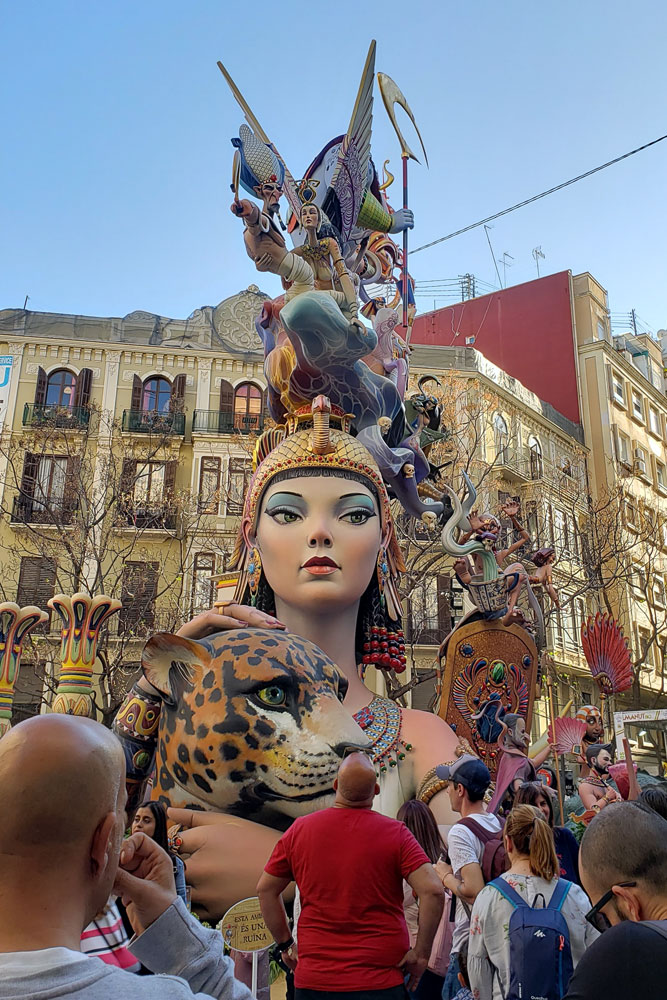 Valencia is comprised of many communities, also known as falles, and each one constructs two sculptures every year of papier mache (or, as I've been told, more recently of polystyrene). 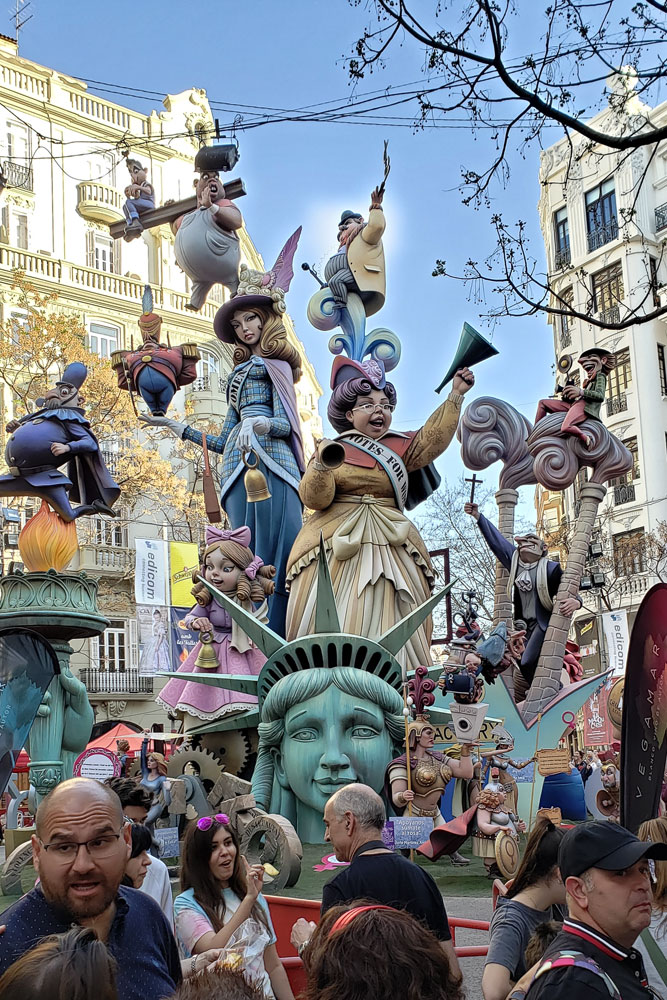 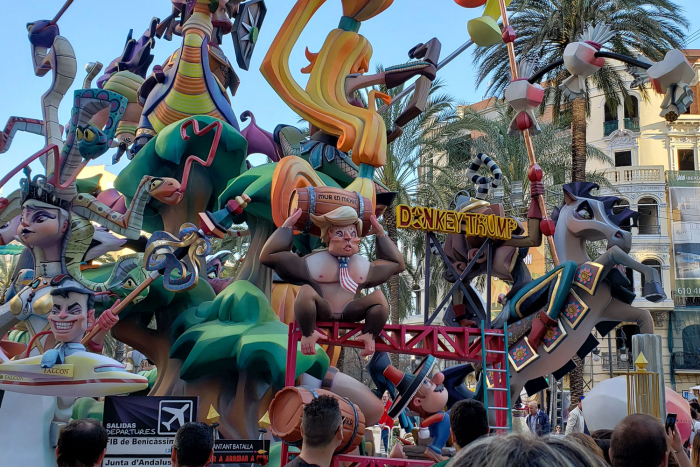 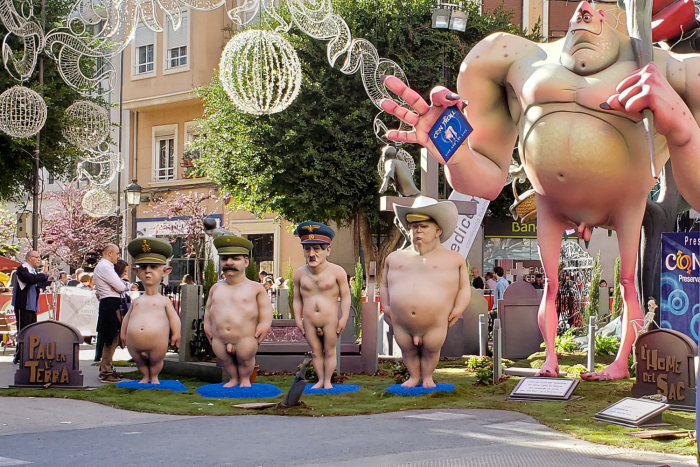 Each community has a large sculpture (sometimes enormous), often political or satirical in nature, and another smaller one for children (infantil). We had the chance to page through a publication about each community's design inspiration, designers, falleras, and cost -- there were something like 395 of them! Times 2. And some costing in the neighborhood of €300,000. 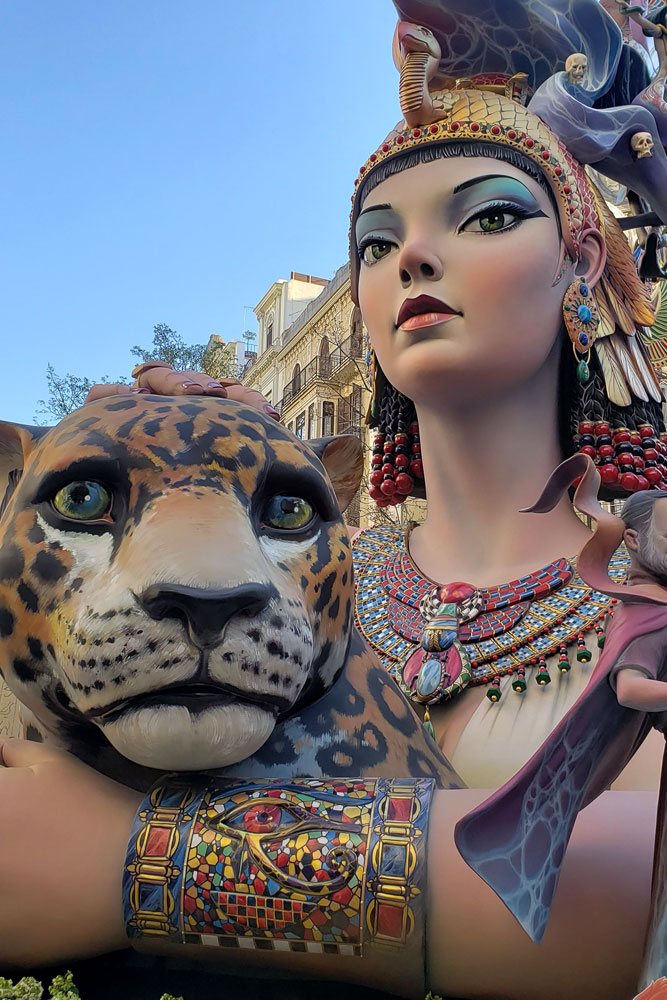 The detail is incredible.

The events during Falles, according to Wikipedia (which is a pretty good article) are such: 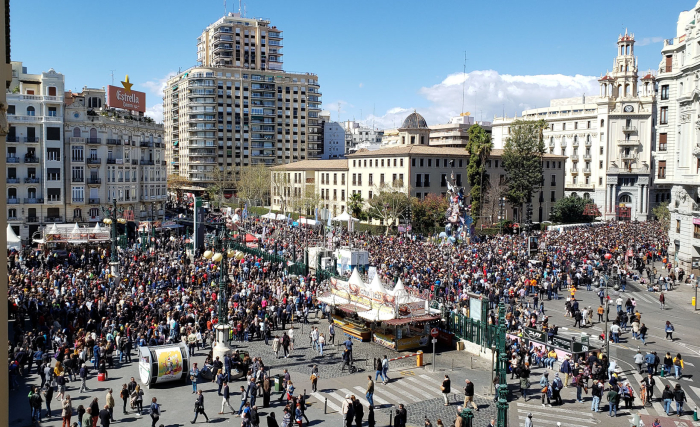 Crowd gathering for the final mascletà, as seen (and heard) from our perch at the Plaza de Toros. 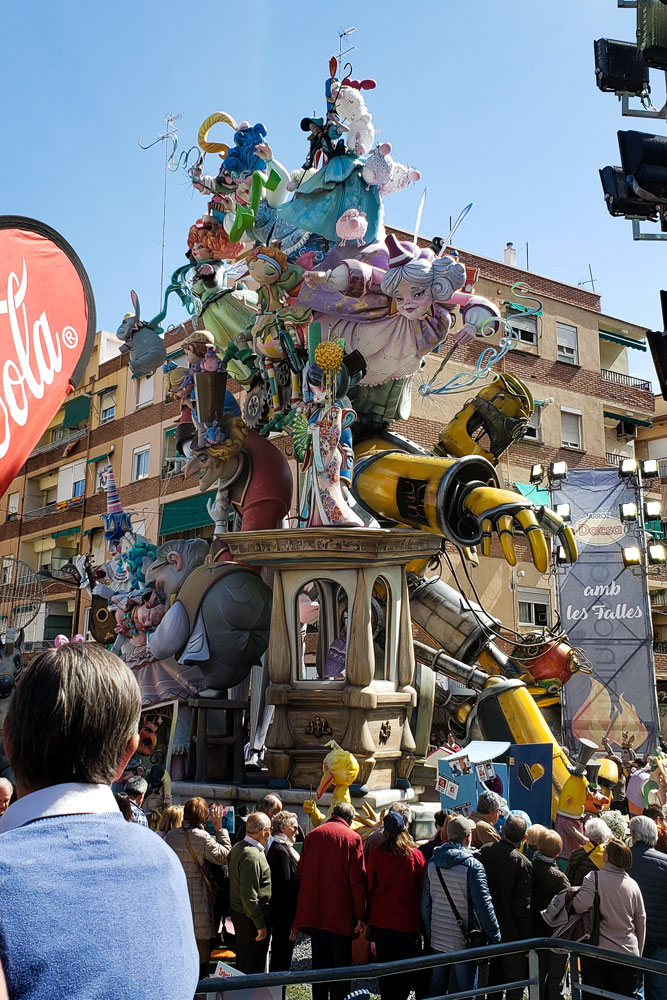 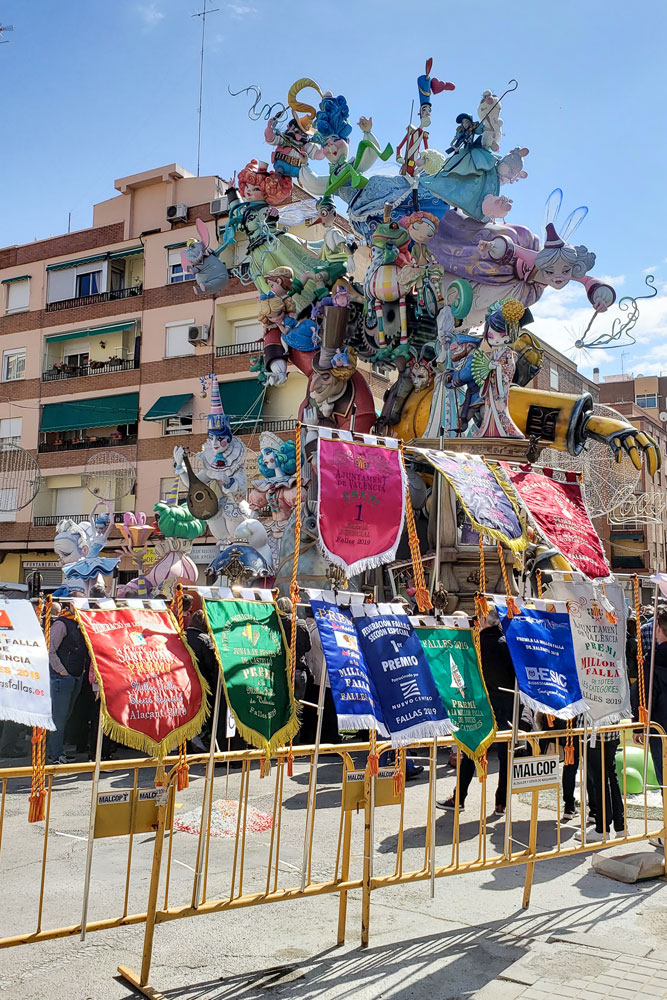 This was the major winner. It was in a distant community, so we took a bus to see it. Do you see Bo Peep? 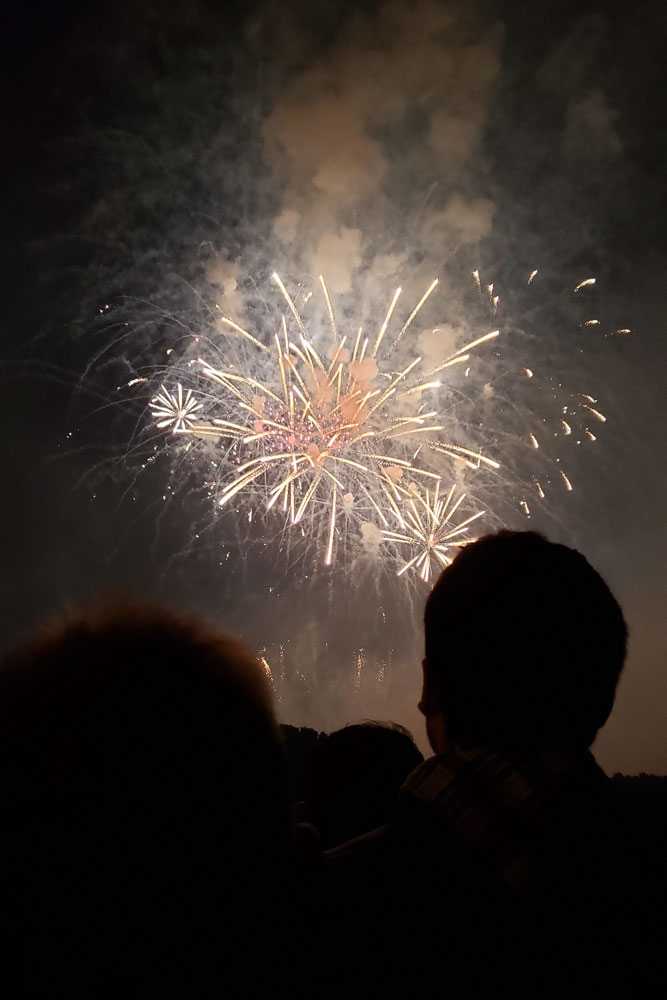 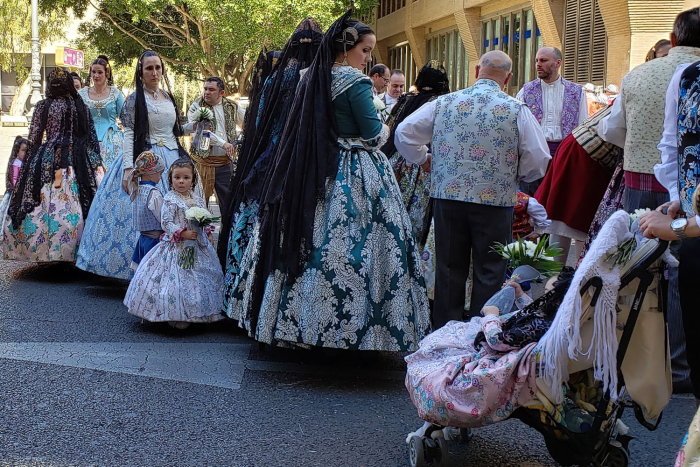 Notice the flower bouquets for the Virgin Mary's dress. 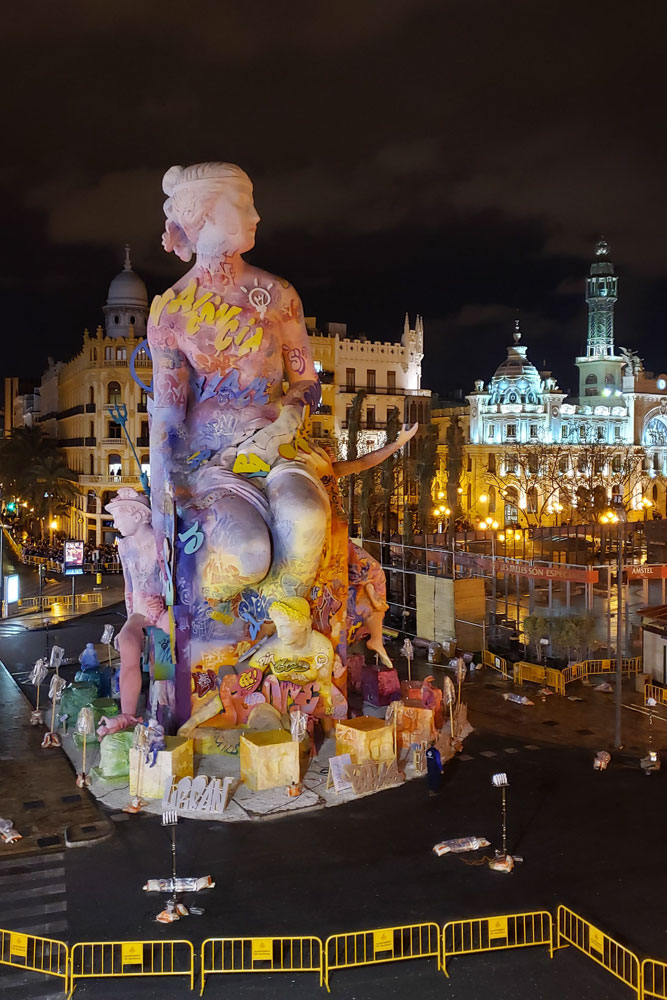 Instead of watching any of the larger neighborhood falla burn, we made our way to the Plaza del Ayuntamiento for the burning of the main "city" falla. Annie knew someone who knew someone, and for €25 each, we found ourselves on a 2nd story balcony with a fabulous view, unlimited snacks & beer & wine, and arguably one of the best spots in the city. 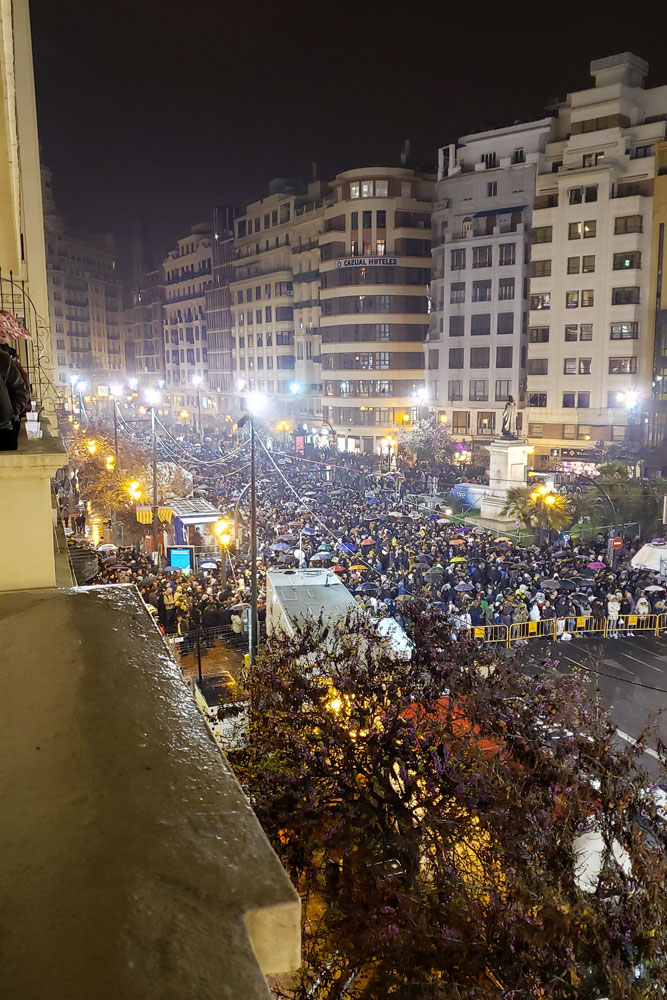 This is part of the crowd gathered for the event. 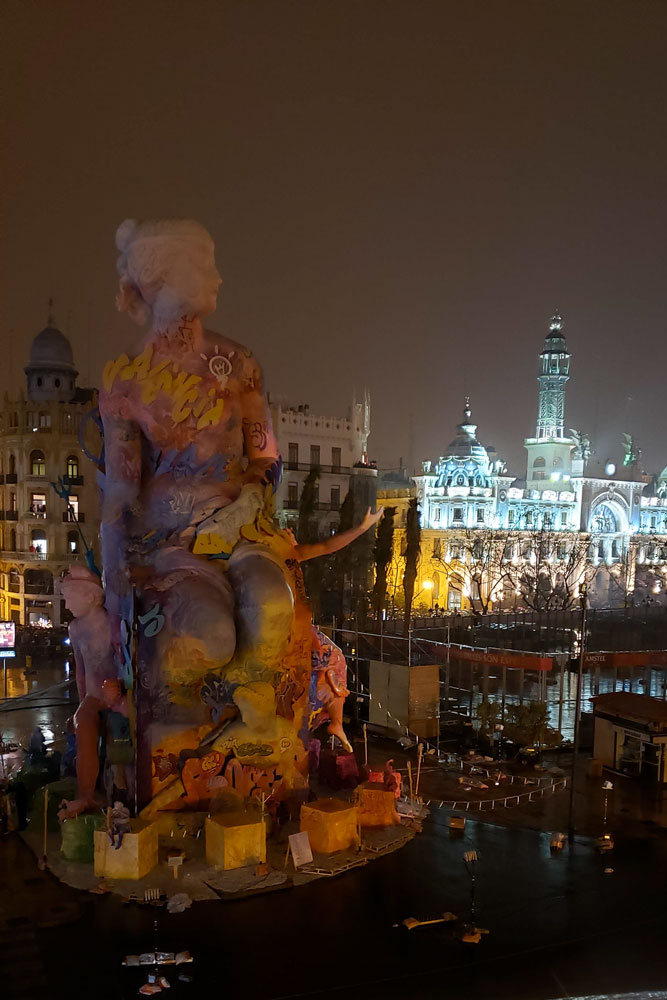 It was very dramatic, as all the lights went out (the illuminated building in the rear is the post office!). 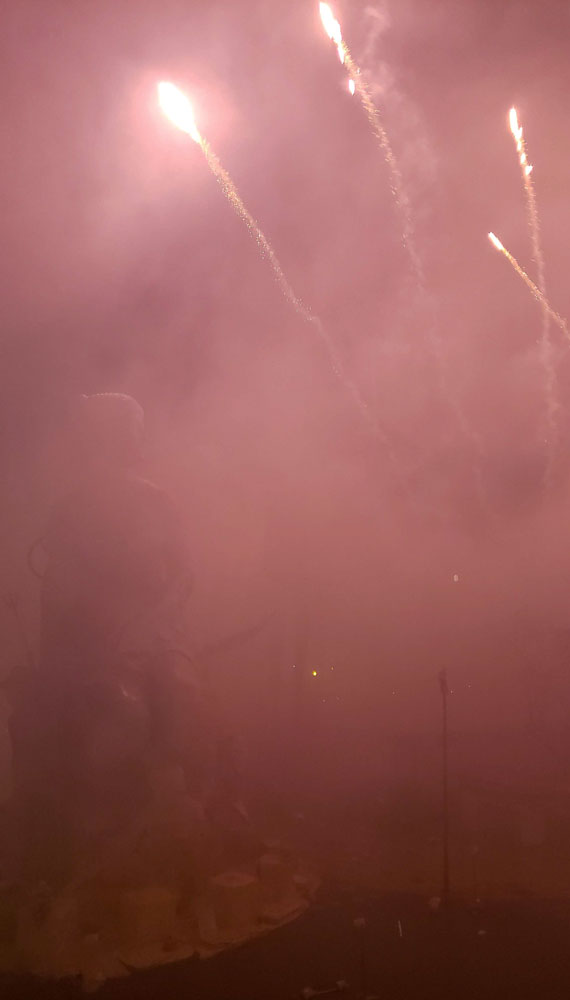 Then the fireworks began... it was incredible. There are a few video clips in the embedded IG post, below.

Queue the dramatic music... I'm not sure what it was, possibly the Spanish national anthem, or maybe an important Valencian piece. It was dramatic with the flames, pieces falling off, everything... 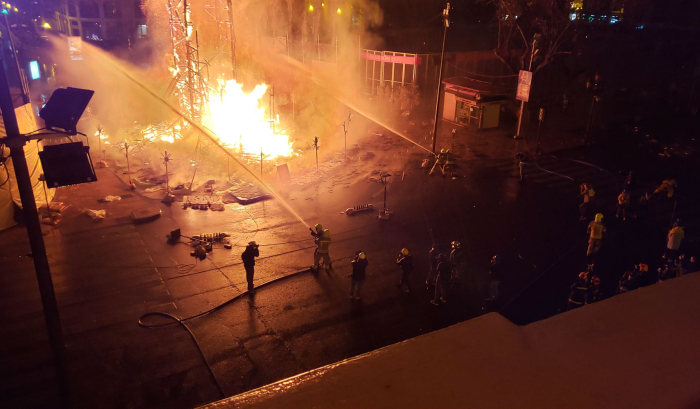 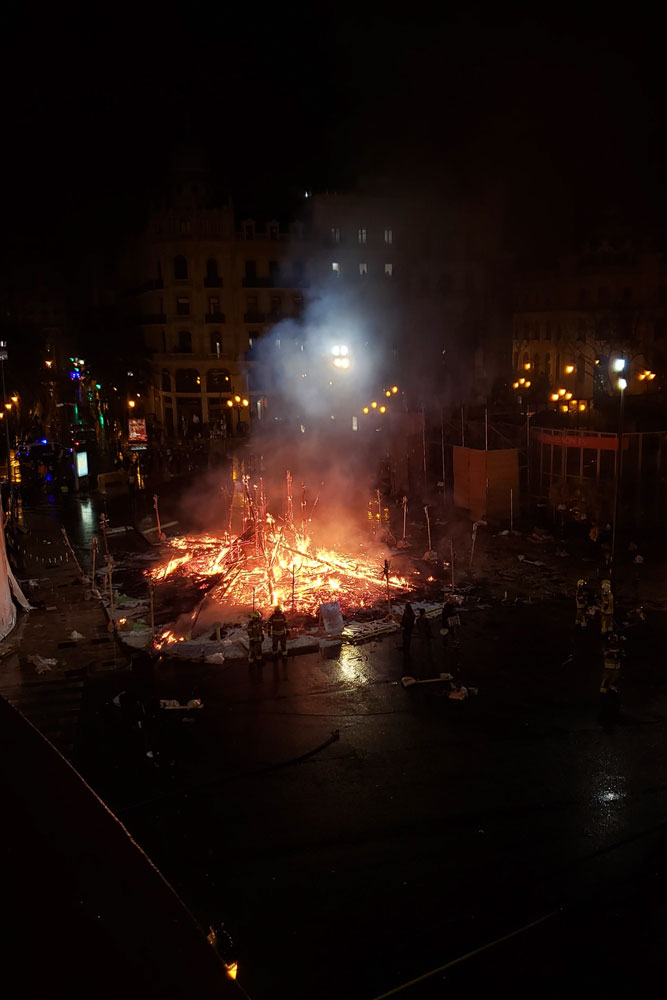 We were probably 100' from the inferno -- and I mean inferno. We all had to vacate the balcony, and I thought my forehead was going to have blisters. 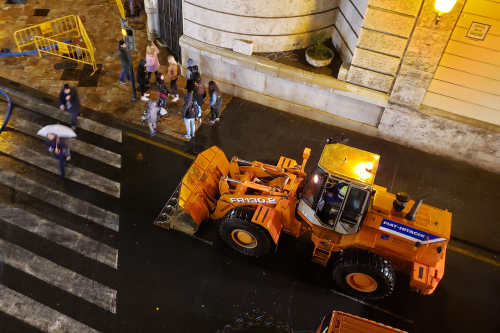 The clean-up crew was standing by. Katie & I were walking down there the next day and you would never have known that a 9-story tall lady statue burned there the night before. 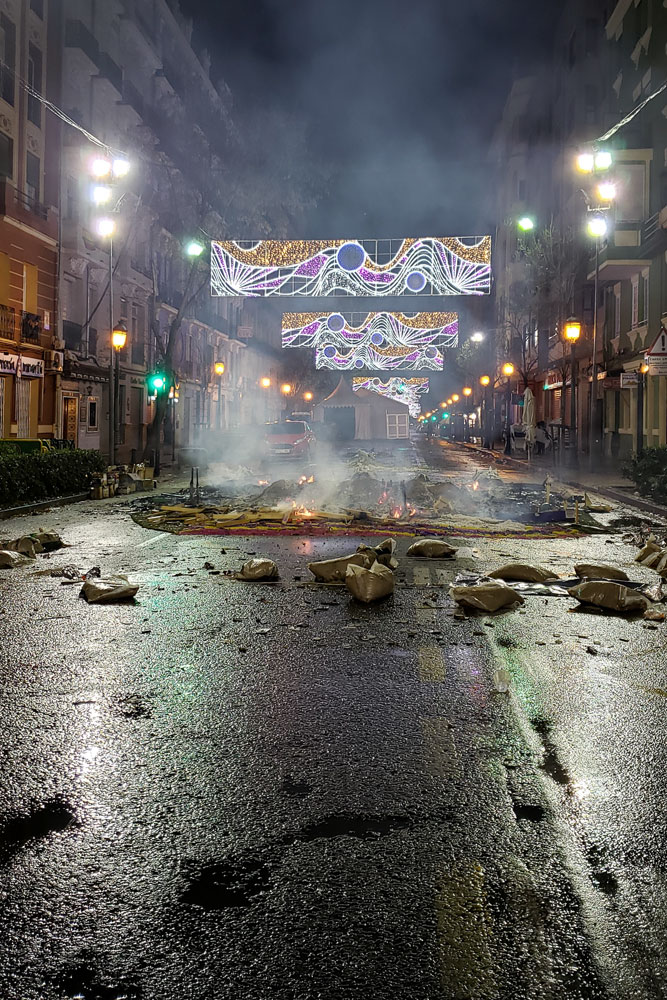 Every neighborhood had a mess to clean up! And they did. It was just one more amazing part of this whole mind-blowing thing we witnessed.

I think that's as good as it's going to get. There might be one more quick post about Valencia... stay tuned!

I remember being at Mardi Gras (40 years ago!) and driving to the airport Ash Wednesday morning there was NO evidence of the parties the night/day/weeks prior. The clean up was so fast and thorough.

Wow is right! Those fireworks! Unbelievable!! And, I am laughing at the IG banned photo! So.much.fail!

Thank you SO MUCH for this! Your pictures are amazing and this is an event I had never even heard of. Must have been phenomenal to see this all up close enough to feel the heat. I really appreciate your sharing it with us, and have referred a bunch of people to your site to see your great photos. Thanks again.

Your whole experience looks amazing! If you keep going in that Wiki article the history of Las Falles is explained. It has to do with Valencian carpenters burning planks in the spring. The tie-in to St. Joseph is that he was a carpenter and his feast day is 3/19.

Hard to imagine something that dramatic and communal happening in my staid city! What an experience! You took so many amazing pictures and really gave us a sense of how large an event this is and how extensively the city is a part of it. I'm so glad you had great seats for the event and thank you for sharing them!

This is so incredibly amazing! If someone had described Las Falles to me I could never have conceived of something so massively huge, creative, and beautiful without your photos. I'm so glad you got to have this unbelievable experience and thanks you for sharing it!

Thank you so much for sharing! There is no way I could've imagined the sheer scope and spectacle without your words and images. (I am glad, though, that I have the sound off on my laptop ... pretty sure the noise of all the fireworks would send Holly under the sofa!)

Incredible photos, thank you so much for sharing it with us! It looks exciting and overwhelming and fun!

My goodness!!! As I was following along on Instagram, I kept thinking ... it looks overwhelming and just exhausting! (And to think it happens EVERY YEAR.) Thanks for taking us along for the ride (where, I'm sure, it was much more quiet.) XOXO

I think your photos and narrative were very effective at transporting this gal who doesn’t like crowds to an unbelievable event. As I was following you on IG, I kept thinking of Mardi Gras and Carnival, although they kind of pale in comparison when you get to the pyrotechnics. Thanks for sharing this.

Fabulous photos! I so much enjoyed your IG posts about Valencia -- it looks to have been an amazing experience! Thanks for taking us along.