There's an FO to report! 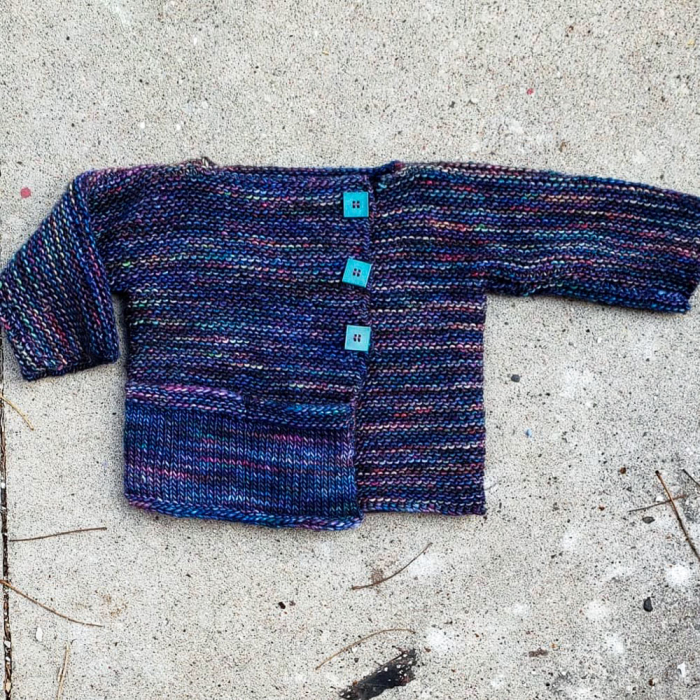 I had plenty of yarn left over (and still do), so decided to knit a pocket across the wider side of the asymmetrical front -- in stockinette instead of garter, just because. 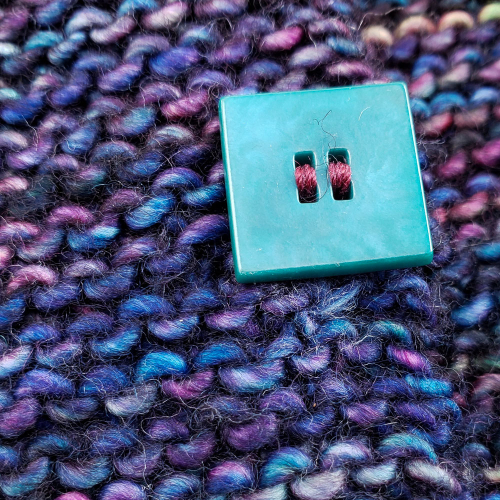 I found the perfect buttons at my new LYS, Casting On, where I'd also purchased the yarn on their "soft opening" day. 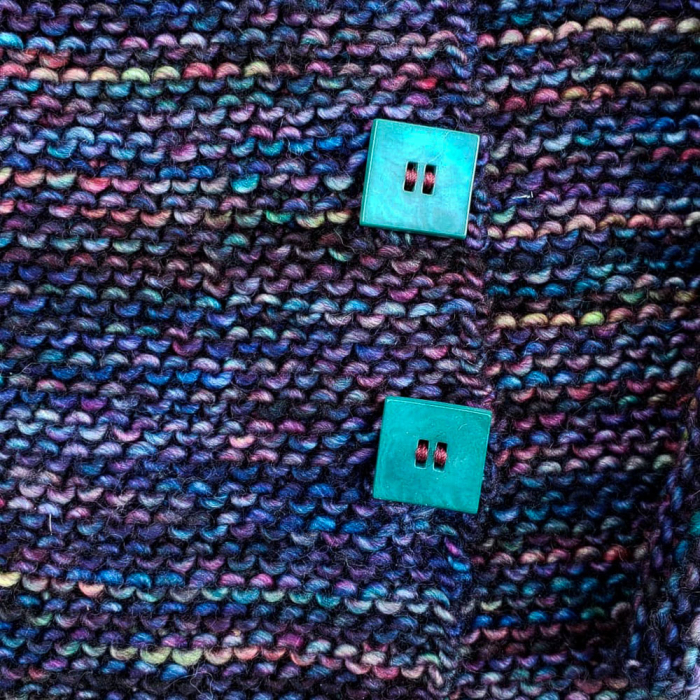 Oh, those colors are just so yummy! I haven't had the pleasure of seeing Malina wearing this sweater yet. Hopefully that'll happen soon!

<rant> I am mad that I bought this pattern. First, I already have a very similar pattern that I like a lot, which is also knit in one piece but in a slightly different manner, and has less seaming. Second, while paying $6 or even more for a downloadable pattern is pretty standard these days and I've never balked at that before -- designers deserve to be compensated for their work -- what I'm used to getting for $6 and what I got are two very different things. A photo would have been nice... even a clear line drawing that was larger than a thumbnail would've been great! Just sayin'...

I've been working on a pair of socks for Ginny. This was my "travel knitting," and I actually knit while traveling for a change (jumpstarted by a 5-/6-hour delay)! 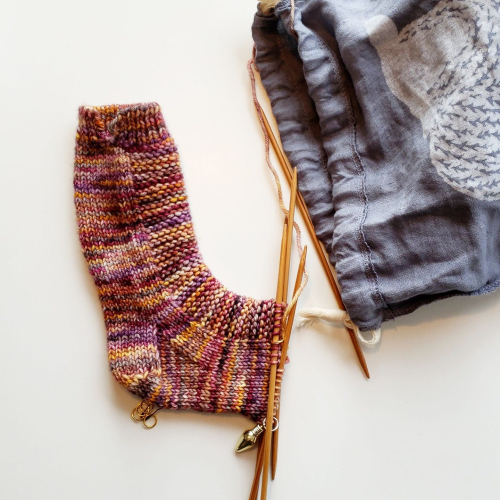 This is one-half of a pair of Rye socks from Tin Can Knits. (An incredibly detailed and well designed FREE pattern with both color photos AND drawings.) As usual, even my stretchy cast on is a bit too tight (also, Ginny has chubby legs... which I have a feeling will soon be slimming as they lengthen), so I'm just leaving the ribbing unseamed -- it's actually kind of cute turned down like a little cuff. I had her try them on the other day before I kitchenered the toe, and sock #2 will be on the needles soon! Anyway, I sure like how they're turning out.

There hasn't been very much of that lately! My Brilliant Friend is still on my nightstand.

I downloaded the audio version of Daisy Jones & The Six before we left on vacation -- because I thought I might want to listen during flights or something. But I didn't. It looks like fun, though, and I might plug it in soon! Maybe I'll listen while I work on the #the100dayproject

I think that sweater for Malina is adorable and I love the little changes you made! I think I need to look at that sock pattern and cast on some socks for Genevieve!

That sweater is lovely, especially in Malabrigo and with the buttons you chose. It glows! I just looked at Rye and it comes in adult sizes; maybe this is my chance to try some Malabrigo myself.

Malina's sweater is beautiful Vicki - so sweet. You are right - the buttons are PERFECT. And, if she is anything like Gin & Jun (and I'm sure she is) a pocket will be a necessity - lol. Love the socks for Gin too and great idea about a turned down cuff!

Good to know about that sweater pattern. I do think it's really cute and I love the pocket and the buttons are a perfect match. Adorable socks for Gin!

That little sweater is darling and the buttons are the perfect final touch. The socks look like fun. Thanks for the tips on two great patterns.

I love the little sweater, Vicki. It's just so sweet -- and the colors in that yarn are really magnificent! (Those brights just spakle in there.) I love Tin Can Knits patterns. The instructions are so very clear and detailed -- and the photos are wonderful. XO

I love the sock (and the sheep bag). The sweater is darling and the buttons perfect. You hope new designers will learn over time to do a better job of dressing up their patterns.

Sweaters, socks, yes anything with clear written words + photos + diagrams w/numbers in a pattern is a must. Tincanknits is such a user-friendly site, they are one of the best.
Harrumph also “(darn dogs) stay off my . . . ” /rant away.
Nice colors, buttons, knitting, your all looks grand.

ok. flat ribbing and turn down cuff for toddler (and maybe even little kid) socks is GENIUS! genius! thank you for sharing that with us!

Sweet sweater! As for the sock cast-on, check out Tillybuddy's stretchy cast-on on YouTube (click on the short version; the long version spends the first five minutes telling you how great the cast-on is). I have been using it on pretty much everything for several years, and it is great!