Though Kate wasn't coming with us to Cornwall, she was going to the UK for a while and she managed to get a seat on the same flight to Gatwick that we were taking, so we were able to share a taxi to the airport. We said our farewells on the way to rent a car...

Overtaken by the charm of St. Ives, apparently, I overlooked the fact that it was a 5-hour drive from London and I was the only driver. I treated myself to an upgrade... 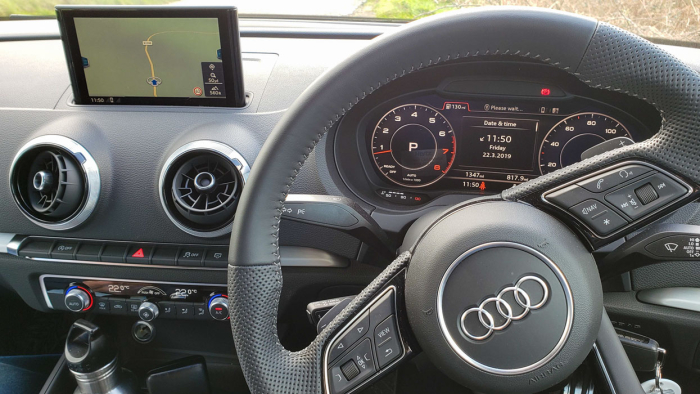 It was dark by the time we got to St. Ives and we drove around for a while looking for our Airbnb. I'm pretty sure I drove down a lane (maybe this lane)... 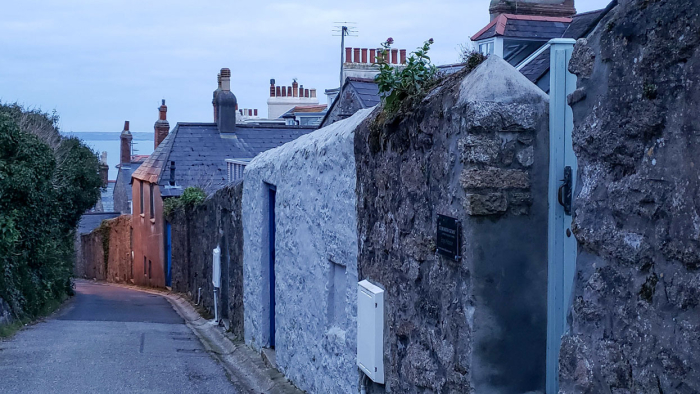 ...not meant for driving... in my sporty little car, in the dark. Yikes.

We stopped once for a few provisions but mostly directions. Hahahahahahaha. OMG.

We stopped a second time and, lucky for us, there happened to be a policeman in the shop and he offered to lead the way and then told us where to park (and he'd know our car and be sure not to give us a ticket). Parking is a very big problem in St. Ives! This was where 1) I realized, when he told me about the very tight turn-around, that I'd been down the street before and had just continued right through that "very tight turn-around" right into the not-for-vehicles lane (in my car), and 2) I scraped up against the curb while parking (the first bite*).

Our Airbnb was FANTASTIC: 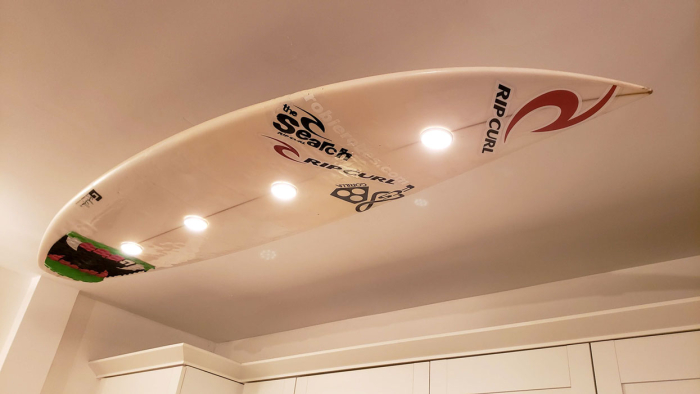 The guy is a surfer (note the cool "light fixture" in the kitchen) and his wife's mum is a knitter (though yarn shops are not plentiful). There were two tiny bedrooms (because Kate might have come with us at one point), one of which we used for our suitcases and stuff. And while cute & cozy, that's not why we were there.

The minute this came into view, I pulled over to take some photos. The light was so pretty! Also: Cornish coast, farms, stone walls, water, and beautiful sky. 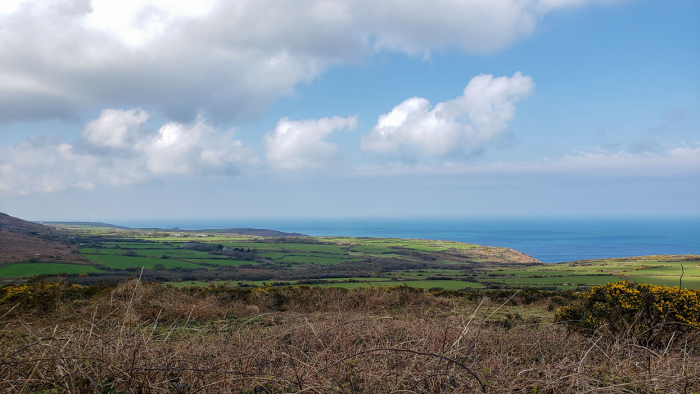 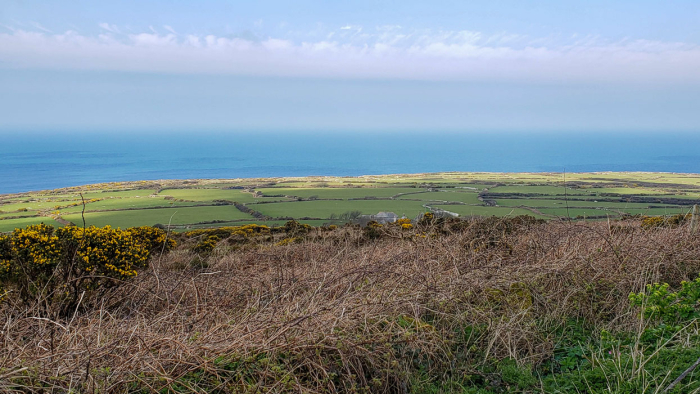 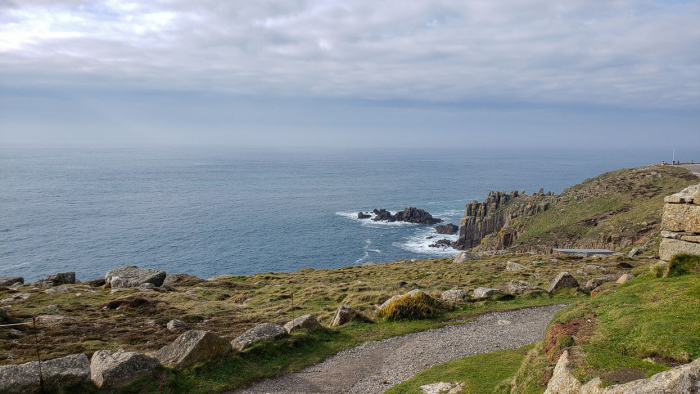 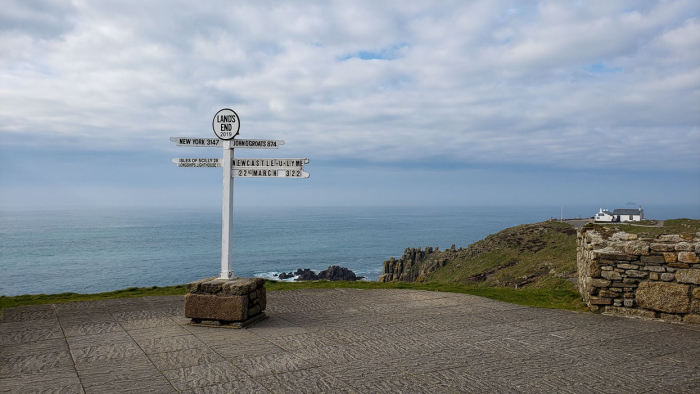 We meandered and stopped a few places, most notably at Land's End!

We also hunted down some standing stones. 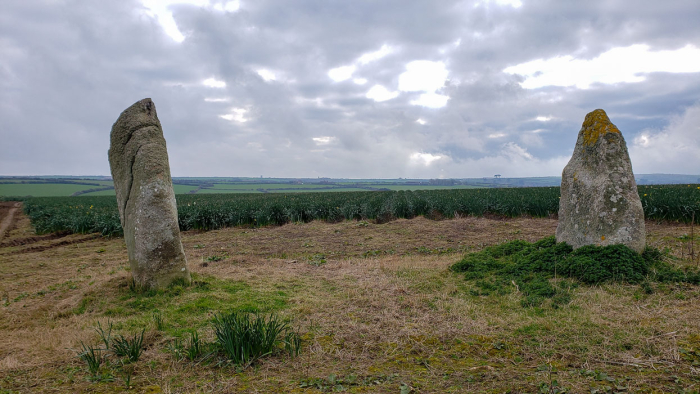 These are The Drift Stones located near Penzance... 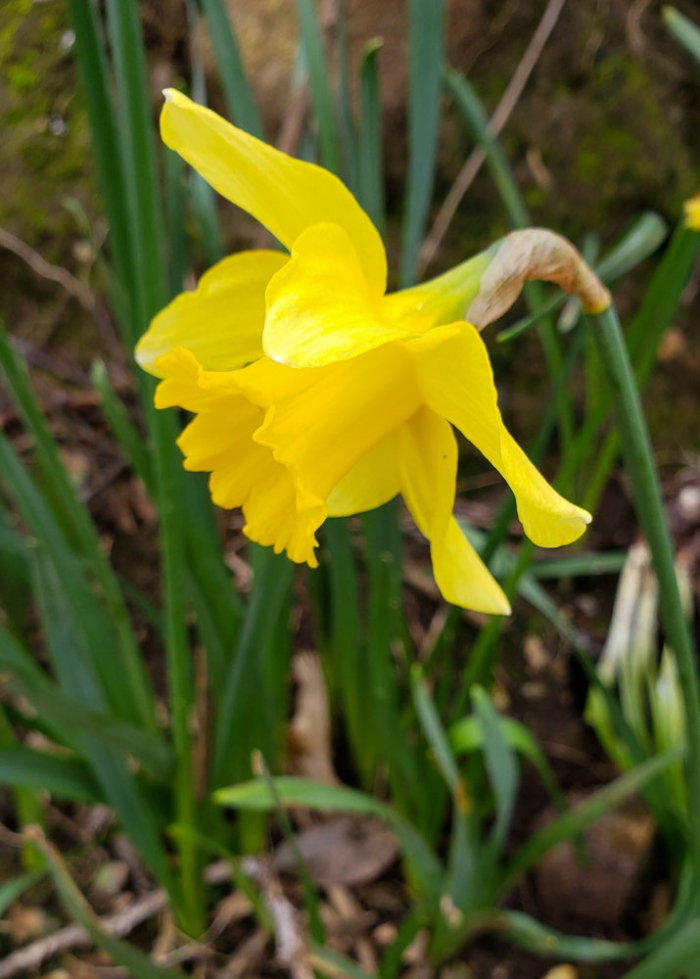 ...in a field of daffodils! This can be quite a hunt, and we turned around a few times before we finally made it. (We were originally across the road -- if you click on the map, those buildings are an abandoned farm.) (At least we think it was abandoned!) There were other stones we could have found, but it was spring and fields were wet & mushy... we felt pretty great just finding this one! Luckily, it wasn't too far off the road and we were able to pick a reasonably dry path. So cool!

We had some pretty good food & drinks on this trip, but this simple breakfast was one of my favorites! 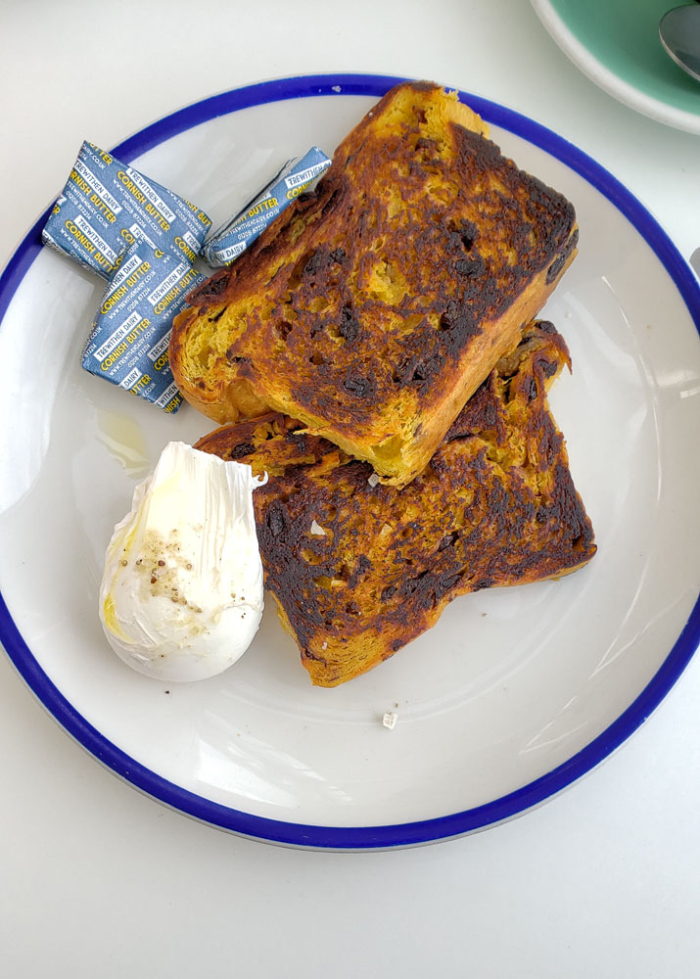 Then we took a walk to & through the Barbara Hepworth Museum and Sculpture Garden. 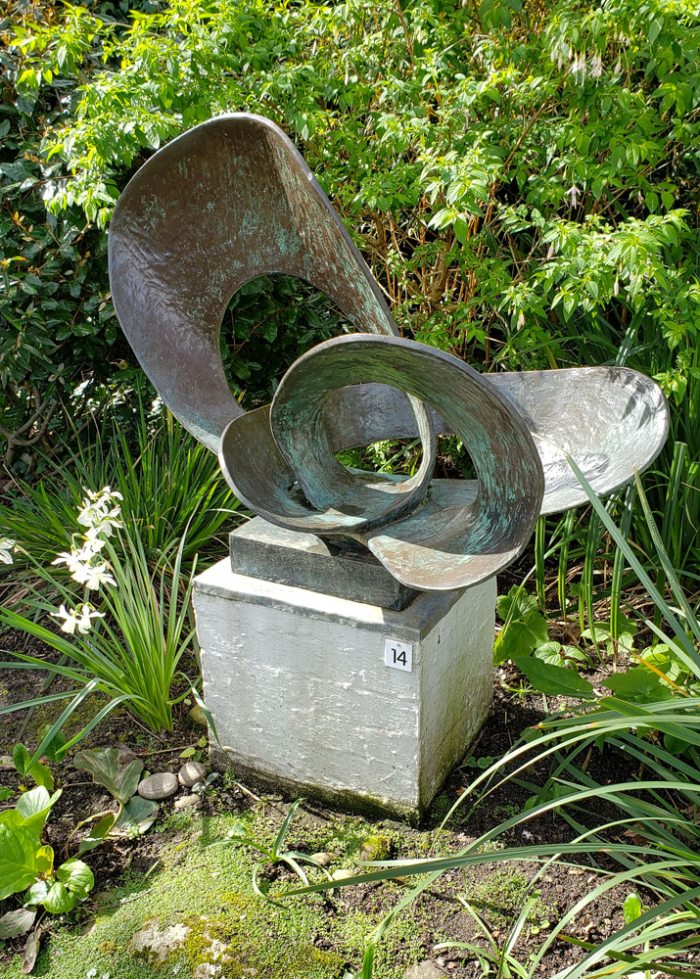 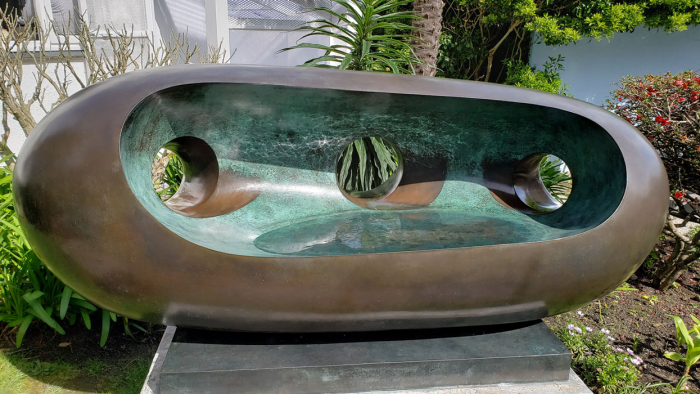 It was just beautiful. Something to see at every turn. There's a tiny little house in the first garden photo above, in which there was a small bed... oh my goodness, I still get dreamy thinking about how wonderful it would be to take a nap there. 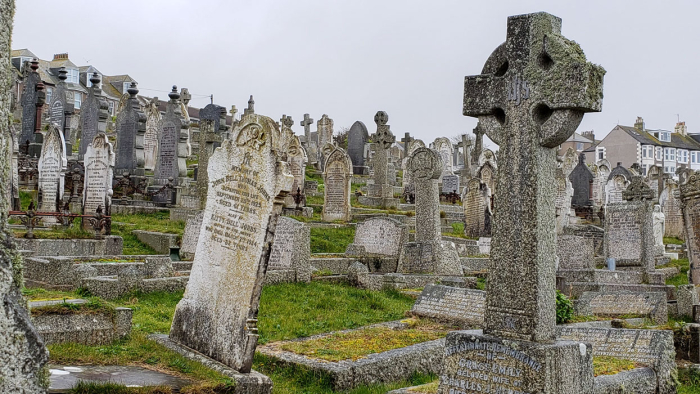 There was an old chapel and graveyard near the car park where we left the car most of the time. I couldn't help but walk through it a few times!

It wasn't long before we were on our way back to London, where I unknowingly picked up the second bite*! But first, we needed to see a few more standing stones... 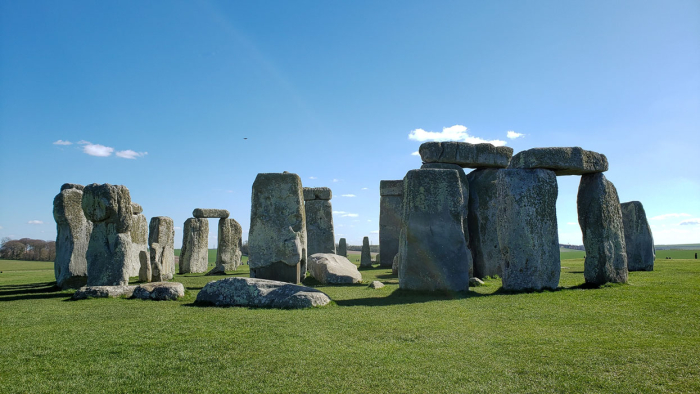 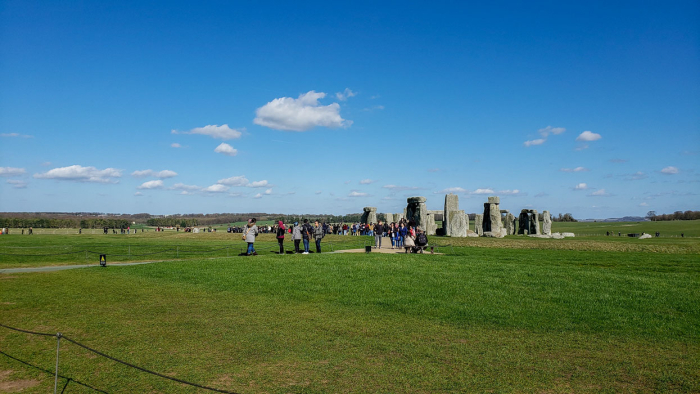 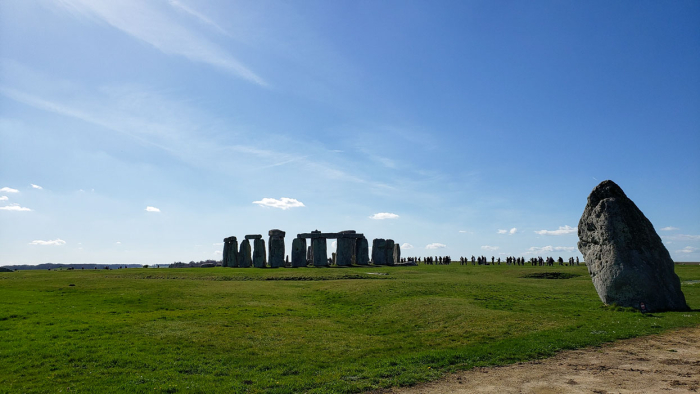 It was a mile-long hike to get to Stonehenge from the (new) visitors' centre (we took a shuttle back), and I'm so glad we stopped! (You can also just drive by on the A303 and catch a glimpse.) It's amazing to see!

We returned to London and stayed at a hotel near Heathrow for our morning flight back home. Kate was still there, so we took the train to Paddington and met her for dinner & drinks at The Victoria (yes, I did that!) on our last night and caught up on goings-on. 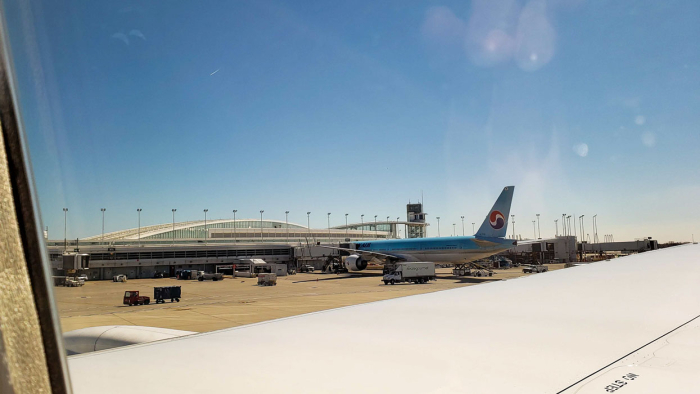 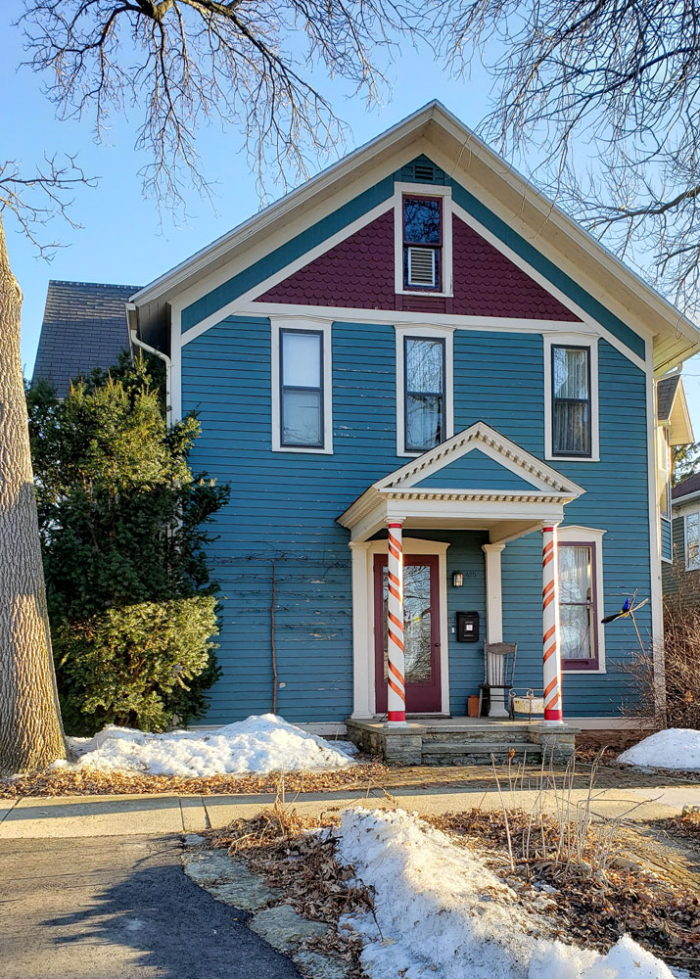 *They collected £50 for the first bite when we turned in the car. I was informed of the second bite by Hertz when they forwarded information from the Devon and Cornwall Police pertaining to a traffic violation; they charged another £50 for that "service." The email stated that "A copy of this fine is attached for your information (unless the offence is a Notice of Intended Prosecution, which legally has to be provided directly by the relevant police authority)." There was no attachment. Uh-oh. I got a speeding ticket -- my first in I-don't-know-how-long -- IN ENGLAND! They caught me on a camera! The cameras are marked by signs, most of which I noticed... I can almost recall breezing through that one, distracted by conversation with Rusty or something at the time. Anyway, to make a long story somewhat shorter, eventually there were forms to fill out and photocopies to send and it cost me another £100 + 3 points! Ugh.

That car was still worth it, though. Did you see that GPS? It popped up right out of the dashboard!!

Ouch on the tickets - especially the points! But, what an awesome vehicle to drive through that beautiful countryside!

Bummer about the car stuff but everything else was incredible! What gorgeous scenery and settings!

Okay. Sorry about the tickets/points. BUT THOSE VIEWS!!!! Just breathtaking! What a terrific trip! (And right out of the dashboard, huh?) XO

Everything looks AMAZING...the car (!!), your AirBnB (I didn't know they surfed over there), Saffron Bread (???I have to go look up a recipe), the Standing Stones, the garden and sculptures. You sure had a fantastic trip. Thanks again for sharing it with us.

Your "bites" seem well worth it because of the views, the accommodations, the attractions along the way, the food, and the CAR! Sounds like a great package!

What a blast! Sorry about the bites but MAN what a trip!

What a fabulous trip. I am now dying to go to St. Ives. However, I will never be brave enough to drive in England. They drive on the WRONG side of the road!

All those blue skies! We have seen very little of that in the last week.

What a great trip! I loved Cornwall. Our travel agent tried to talk us out of going to Stonehenge due to it being “too touristy”. I thought it was amazing.

Who remembers a “bite” when you have courage to drive to famous Cornwall in England?
Photos are great, color me envious.