Priming for Wednesday's start, Mack & Addie slept over on Tuesday night. After breakfast, I gave them a knitting refresher. I had an engagement to talk to a bunch of kids about knitting at the coffee shop later in the morning and thought that perhaps the boys might assist (but zero expectation/pressure to do so).

I thought they were middle school kids, but turns out they were high schoolers -- about 15-16 of them, only one of whom already knew how to knit. It was the last outing/activity of their summertime class, and they were there for lunch, knitting, and journaling. 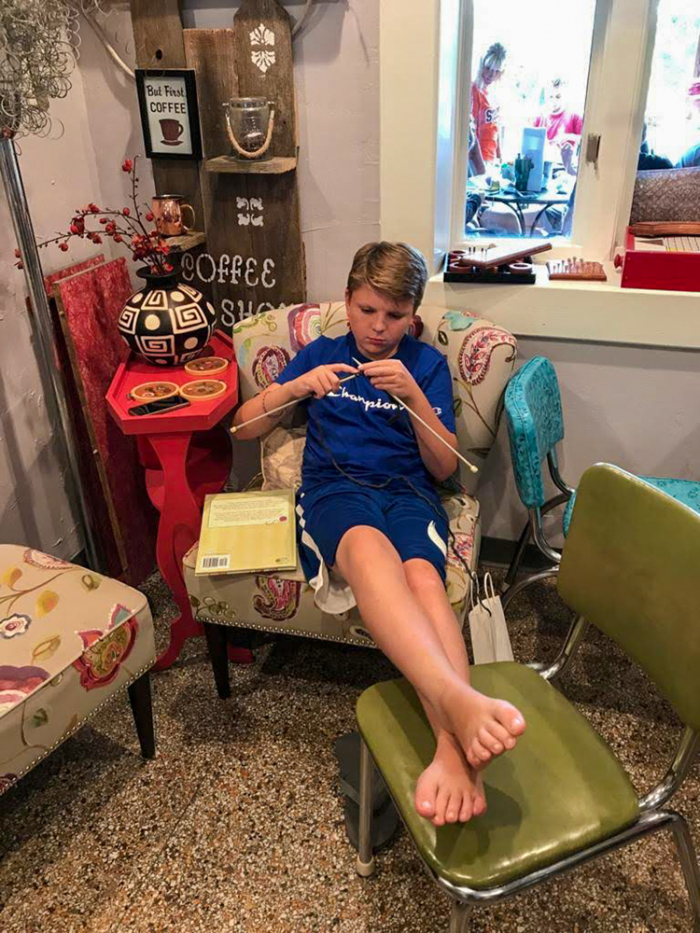 Mack & Addie laid low inside. Annie snapped a photo of me "teaching," but I look like I'm picking my nose, so you get a relaxed, knitting Mack instead.

I'd gathered needles over the past few months, wound yarn, made & printed a resources handout, and assembled a little bag of supplies for each person there... and cast on for each of them, too. I told them that knitting can be very relaxing, as was mentioned when I was introduced, but that learning to knit can be extremely frustrating (hence the casting on for them... we only had an hour and I didn't want to spend all my time on that). I did a little project show & tell so they could see possibilities other than sweaters, hats, slippers & mittens. I brought one of the Knitted Polar Bears I made for the kids, my Parcheesi afghan, my Bijouterie, and the recently completed Pineroot Wall Hanging, which was recently attached to a great stick that Rusty brought back from CA. Anyway, it went amazingly well with some successes, relatively few frustrations, and one "deserter" who said he'd rather crochet (something he used to do with his grandma) (ta-da, I had a hook for him). The coordinators sent feedback to Ali later in the afternoon and more than half the kids said it was their favorite event of the summer. Maybe there's a new knitter or two to emerge!

Right after knitting, we had an appointment with a photographer for family photos! 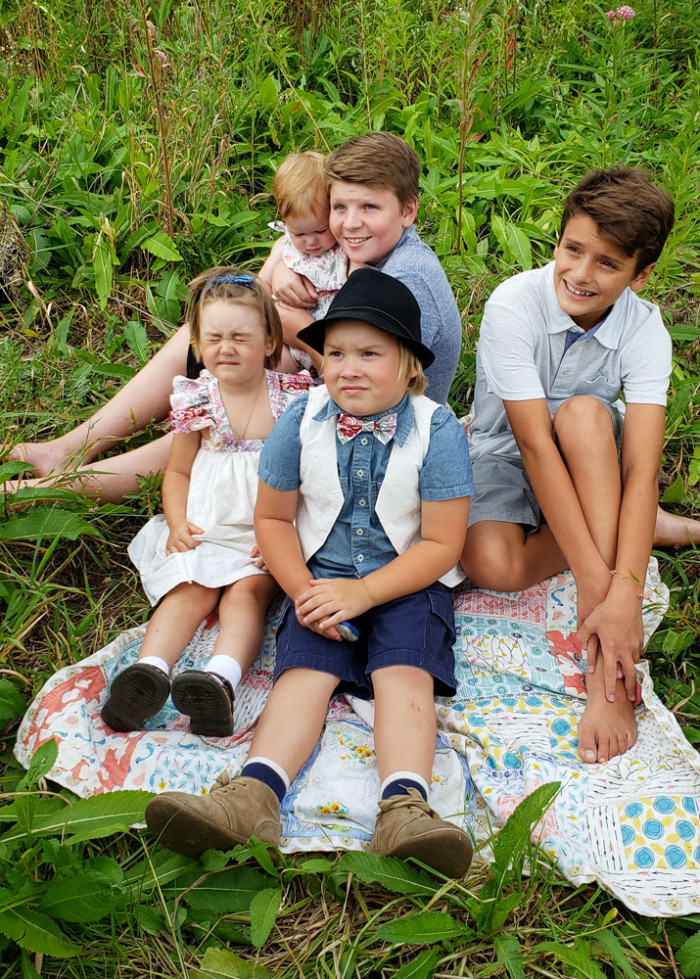 It was overcast but bright and the photographer had the kids close their eyes and then OPEN... except Ginny didn't get the memo. :) 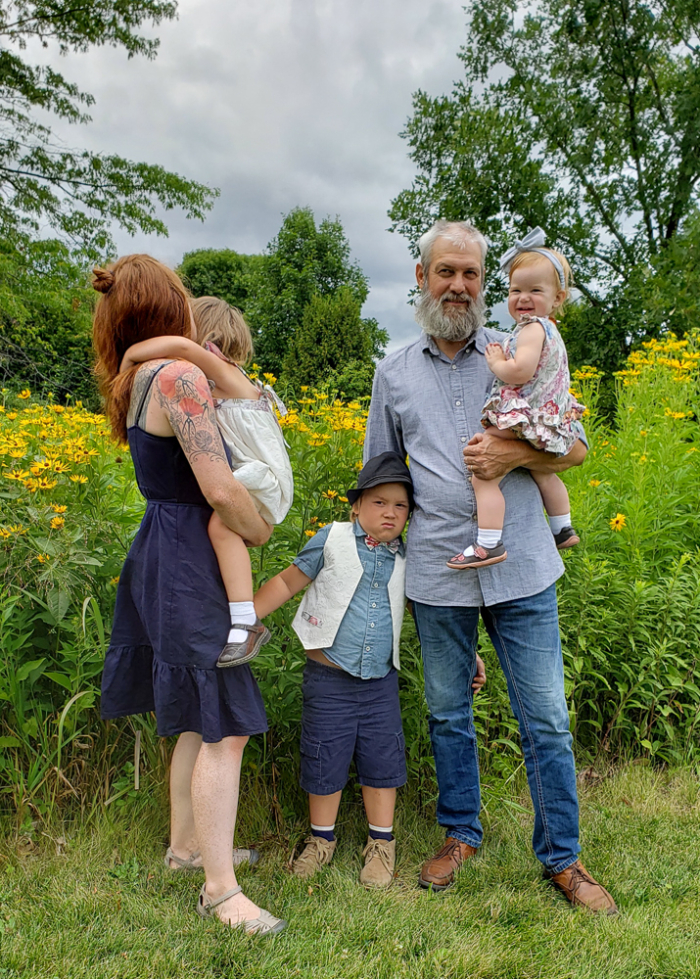 Oh boy. Junah insisted on wearing his hat, and was generally uncooperative most of the time... which then rubbed off on Ginny, more or less. It was an adventure! I haven't seen any official photos yet, but here are some that Annie took... 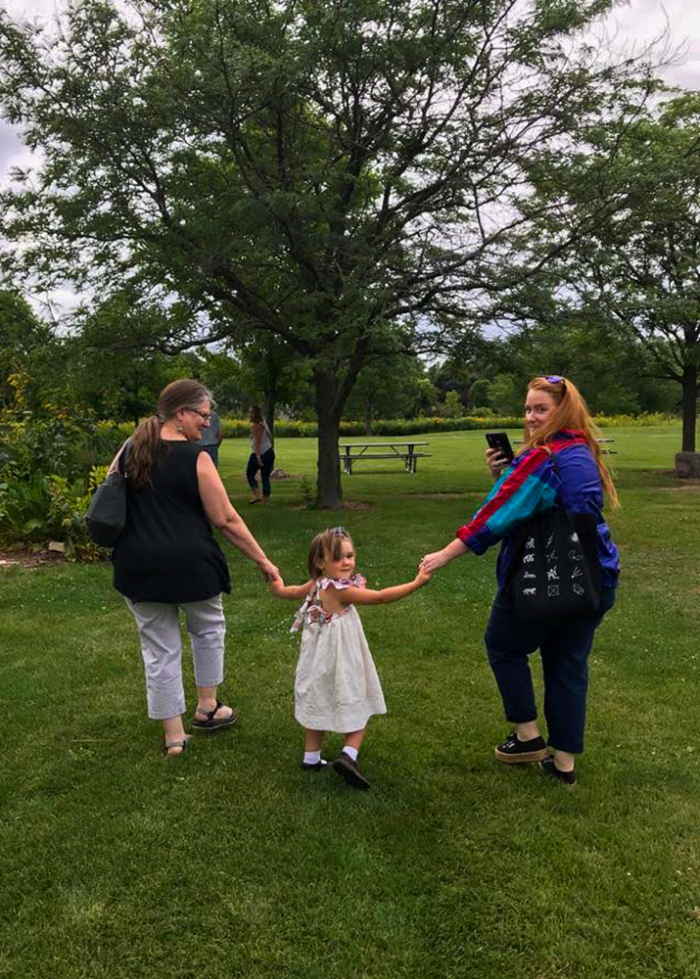 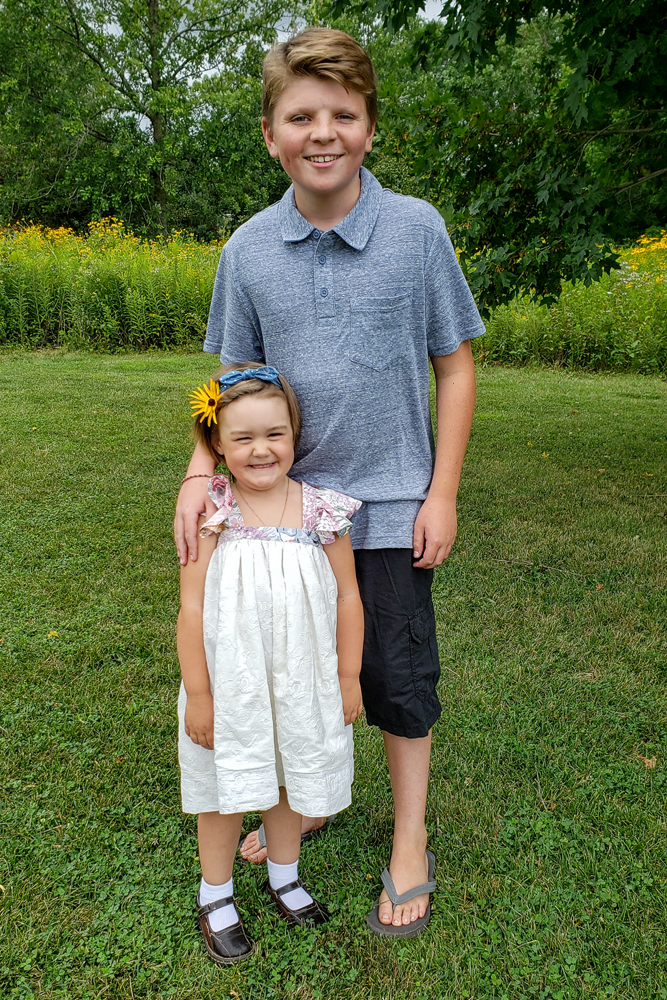 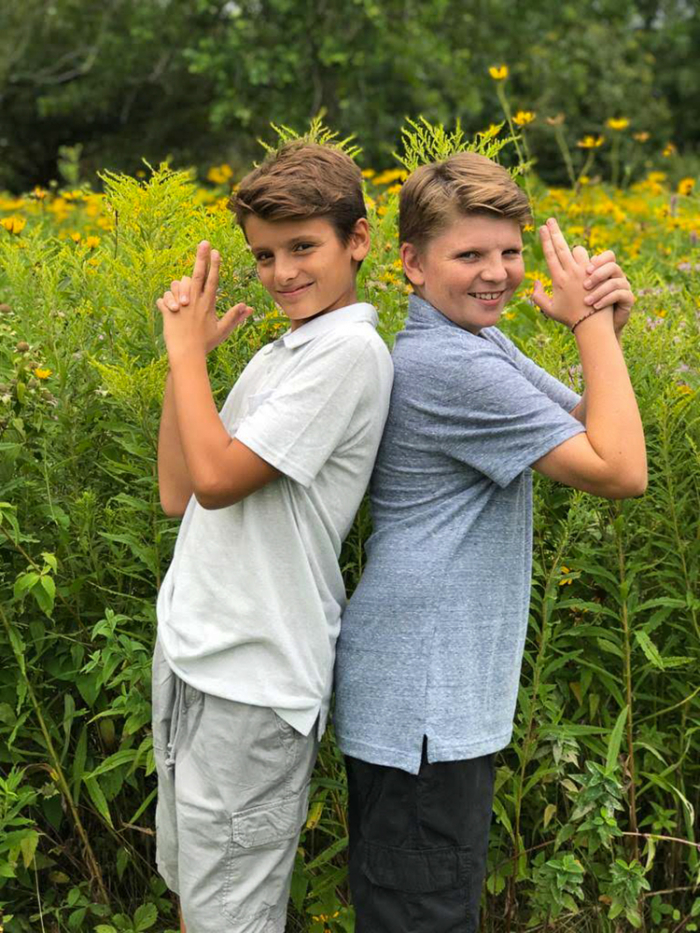 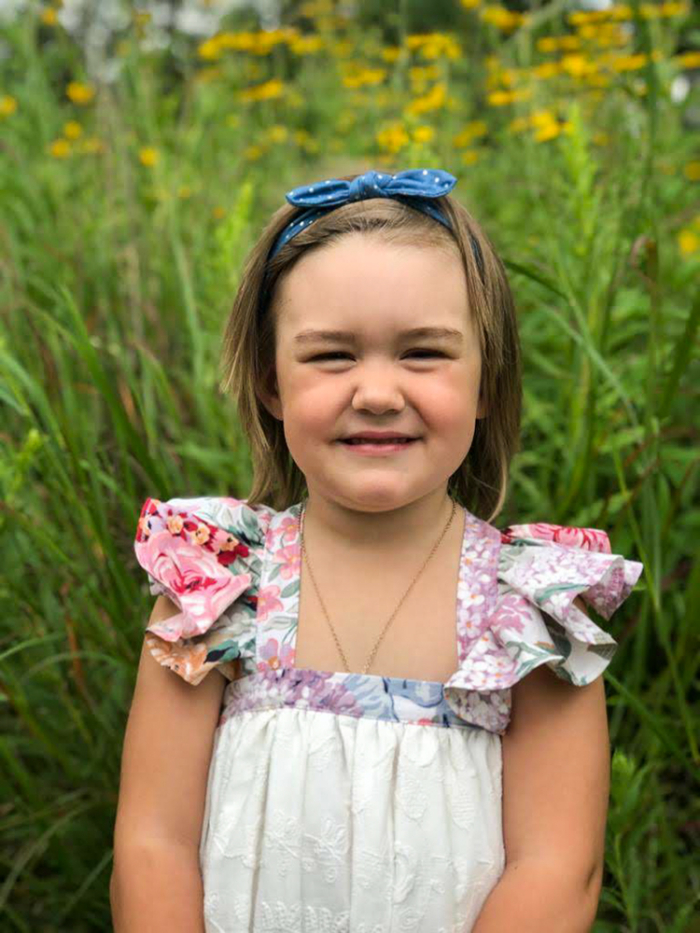 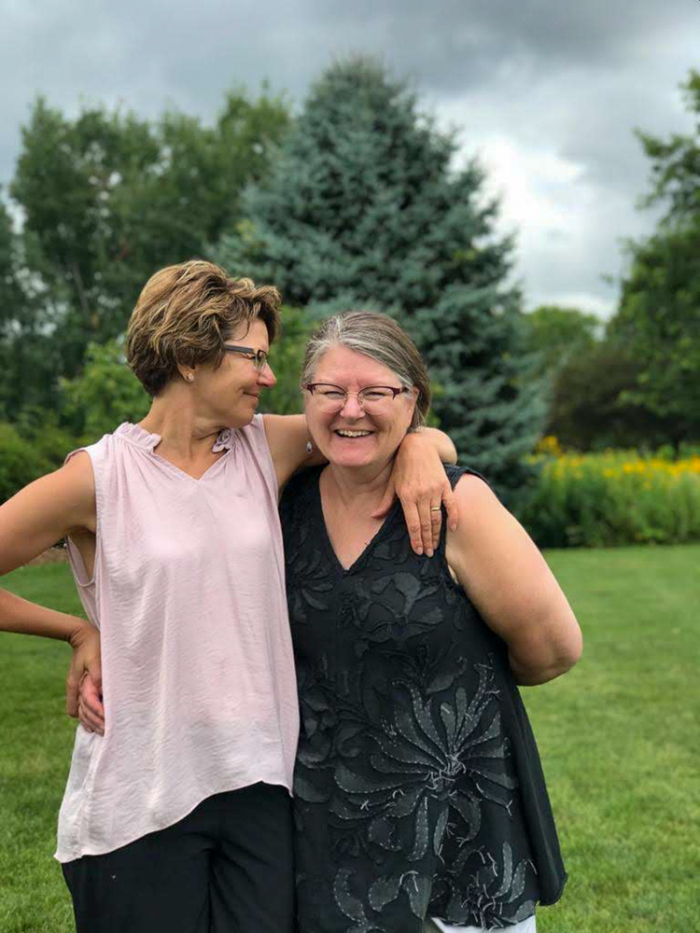 After photos, I took the kids and we went fabric shopping! Yes, I was the one at Hobby Lobby* with 3-, 5-, 12- and 14-year-olds! They chose fabrics for a sewing project I'd planned for a later camp activity, and we escaped with relatively little else (a couple of bandanas, some slime, a couple of stress balls). Junah was enthralled by the fabric cutting, and very complimentary of the cutter and her talents/experience! (It was adorable.)

We headed home, I tossed all the fabric in the wash, we got dinner going, and then it was a sleepover plus 2! Ginny ended up in our bed for a bit in the morning, but otherwise went off without a hitch.

*I would have preferred going to Joann's but I'd been there a day or two earlier and could not wait to get out -- the awful, awful scents for candles (or something) permeated the entire store and were so strong that they drove me out. I can't imagine working there. Addie is even more sensitive to that kind of thing than I am, and he'd have surely emerged with a killer headache (not to mention nausea).

You are such a great grandma/ aunt. And such fun pictures, all of them, capturing personalities and moods. I have tried lots of craft projects with my three granddaughters but nothing has stuck very well. Maybe talents will turn up later. Thanks for sharing. Love your posts.

You're wearing your revamped Alabama Chanin top! The pictures are fun, thanks for sharing!

I look forward to these posts every year. What fun! And the pictures are great. Jun's hat - wonderful. He and Gin certainly have strong personalities - lol. I had the same experience in Joann's last weekend - I could not get out of there fast enough (I think it was the scented pinecones).

It sounds like you are a terrific knitting teacher - educational, well-prepared, and fun (even if you did look like you were picking your nose)! I think the photos are great, also. I'm a big fan of pictures that show life how it really is, complete with the closed eyes, hats, and occasional uncooperative attitude. Auntie Camp was off to a great start!

Sounds like a fun (and exhausting!) day! The photos of the kids really crack me up -- kids will be kids!

Those photos are so great! Really...wrangling kids is hysterical. Auntie Camp for the win!

The photos are just wonderful with everyone being themself for the most part. I love that one of your students was confident enough to say that he liked crochet better, what a great memory that must be of doing it with his grandmother. And you all prepared to let him go his own way.

Those photos are just wonderful! I agree with Patty... wrangling kids indeed! Haha!

Oh, Vicki! You have so much energy and enthusiasm and LOVE! (Trust me, I never had an aunt like you. My loss.) The photo shoot is just . . . So real. So perfect. (Once my sister-in-law and I had our 5-under-4 kids in to Sears for a group shot for our mother-in-law. Oh. Brother. What a disaster! One or another kids was crying in every shot. My sister-in-law asked the photographer if we could have the "burning building" background, please.)

It sounds like you did an incredible job introducing the students to knitting! Bravo!

The kids will have so many great memories of crafting with Auntie Vicki (and g-ma!). And, the kids in the coffee will also have lifelong memories, which could turn them into future hobbyist! The photos of your family are precious even if they are not perfect. This is what real life is.