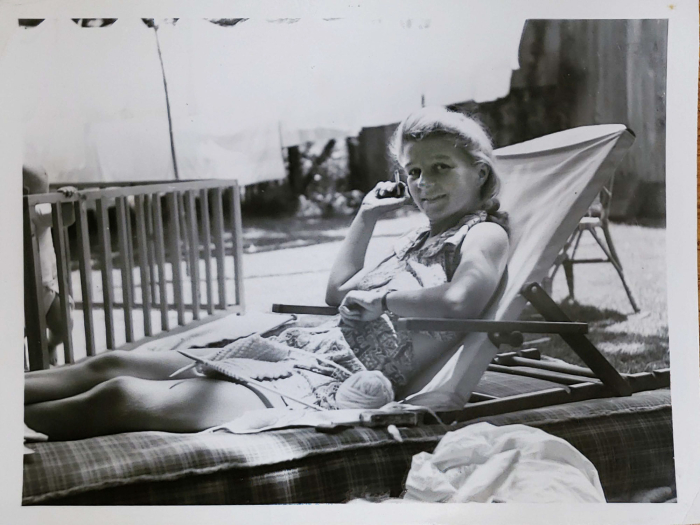 I'm sorry to hear about Janet's suicide, but that is one great photo. I also can't help but think that you two would have gotten along famously, bonding over your long straight needles! I discovered a few maternal mysteries when we cleaned out my mother's things; I'm just not sure I'm ready (or ever will be!) to investigate further. I'm glad you're heading to AZ in November!

That's a wonderful picture and I bet it makes Rusty's heart happy to think of you and his mom sitting and knitting together. (But not smoking!) I think your trip there in November will be wonderful.

What a great picture! I think Rusty looks like her!

I love this photo - it is wonderful! But, what a bittersweet story. And, I agree - Rusty looks very much like her!

What a great photo - Janet was beautiful. I, too, bet you two would have gotten on fabulously. I can't wait to see more pics maybe after your trip out west in November. And The Grand Canyon! I've been a couple of times - what a fabulous, amazing place.

What a wonderful photo! I'm so glad Rusty has access to his family photos again! I'm also really excited for your November trip. I have never visited the Grand Canyon either (Tom has; with many wonderful memories), but after recently watching the Ken Burns series on National Parks, I am eager to get there. In fact, we've been talking about a trip within the year . . .

What a time capsule that photo is. I feel like I see a bit of a couple of your girls in that face, too. I think people had more mysteries or secrets in those days. Such a different time, and yet not in so many ways.

Thanks for sharing this emotional discovery trip for Rusty. His mother looked beautiful in the photo. So sad that he lost her too young. And about the Grand Canyon, I went last year for the first time (I’m 69!). It was so much more than I could ever have imagined. I took one look and burst into tears. So worth the effort and time to go. A real spiritual experience for a non- spiritual person. Enjoy!

How wonderful for Rusty and Dave to have those treasured looks at their past. You and Janet might have had a lovely relationship as DIL and MIL. Enjoy your trip out west. I've been to the area but never seen the Grand Canyon. It's on my bucket list.

To finally "meet" Janet and find you two had so much in common, well, wow! What a heartbreaking circumstance for Rusty. I'm so sorry he had to go through this pain. Having you by his side when he returns will be wonderful for him (and you). You're going to be blown away by the Grand Canyon. I hope your days there are beautiful and sunny!