OK. This is not my best work, but considering that it's taken with my phone at night through a thermopane window... not the worst. 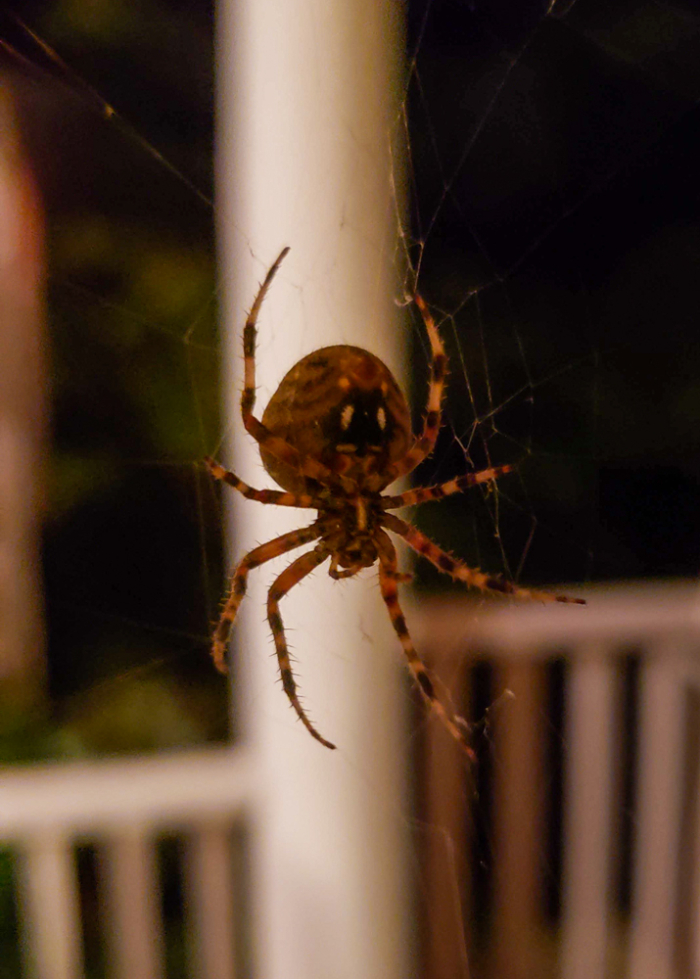 I didn't plan on taking a photo of another spider, but when Rusty said that it's grown a couple of sizes... 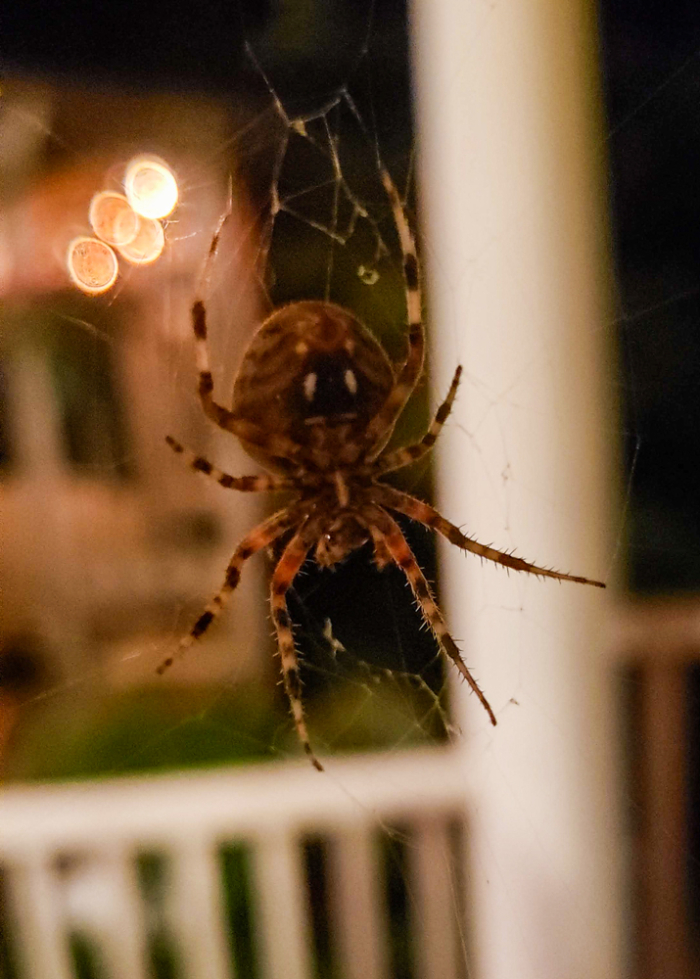 I like the lighting in this one. (Whilst shivering a bit because, really, EW!)

I was thrilled to find my new Zennis in the mailbox on Friday! 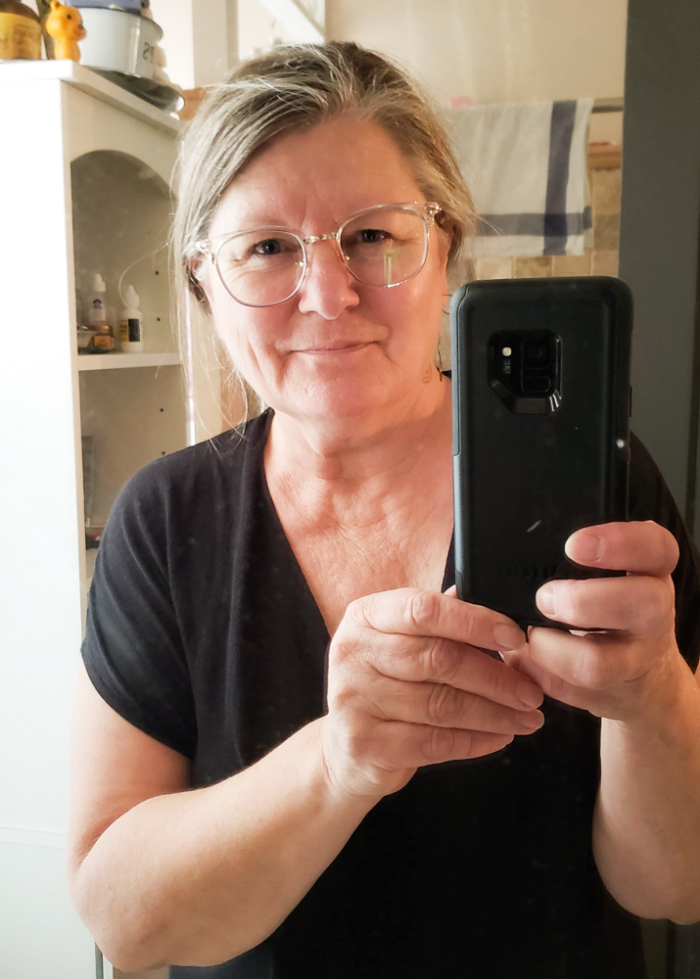 I'd lost my computer glasses on that busy Thursday during Auntie Camp when we went to Bay Beach and Titletown... I contacted both of them and Lambeau Field, too (because we'd parked there), and nothing. Almost immediately, I ordered some prescription readers (new lenses in some old frames) from my local optician, because I cannot live without them now, but didn't like/never got used to the single-vision thing. So then I asked Facebook for some recommendations and Zenni Optical was the clear favorite. Zenni offers two different versions of "computer glasses" and, including the special UV/blue light blocker, the entire pair was less than half the aforementioned lenses. And I love them!!

Alison, a long-time blog reader, contacted me a couple of weeks ago when she realized that she & her husband would be passing through on a trip across Wisconsin. One thing led to another and, long-story-short: 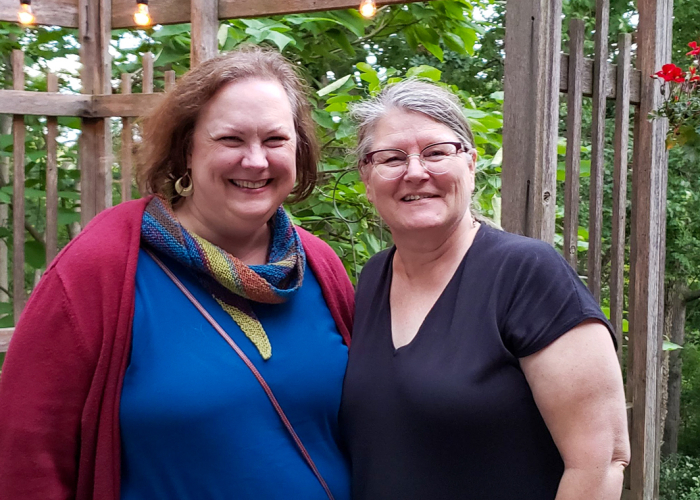 We met up at the coffee shop, went out to dinner (with our husbands, too), and they were our guests in the apartment on Friday! It just happened to work out that our next Airbnb guests weren't arriving until Saturday afternoon. (If you ever find yourself in NE Wisconsin, hit me up! You never know...) 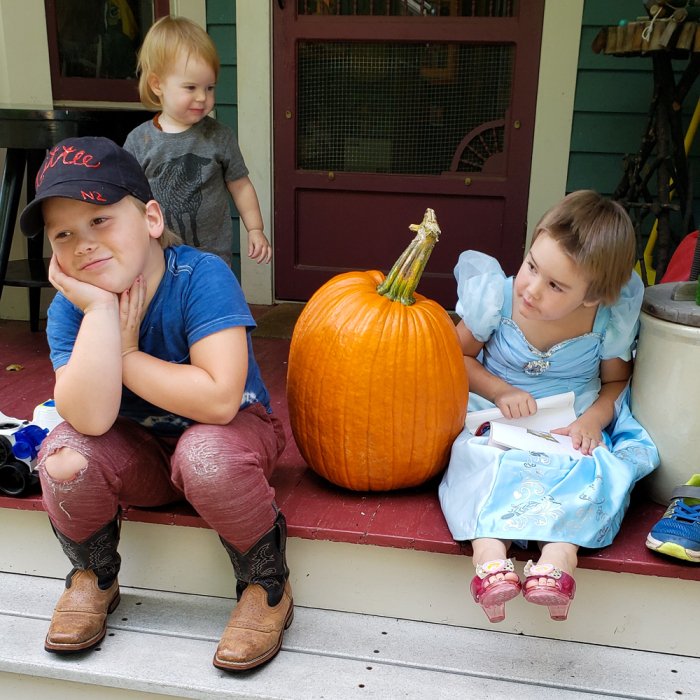 Pumpkin from the kids' pumpkin patch!!

Junah & Ginny arrived later Friday evening for a sleepover, and so we could get up & go -- it was the fall City-wide Rummage Sale on Saturday! We slept in a bit, though, and had breakfast... and our first (very good) stop was a block away! My neighbor, Nancy, who owns the antique mall downtown, was clearing out some stuff at home and we ALL found treasures there. I stopped the car maybe three more times and we were able to walk to a few sales at each stop... and soon enough they'd had enough, and were ready to go home and play with their new stuff.

One of the items we found was a Curious George DVD, which I popped into the DVD player in the apartment so they could watch/relax while I changed over for our Airbnb guests arriving from Texas later that day... our first for a Packer game at Lambeau Field!! (They were so excited... all of our guests for Packer games are positively giddy!)

This was the mood on Sunday: 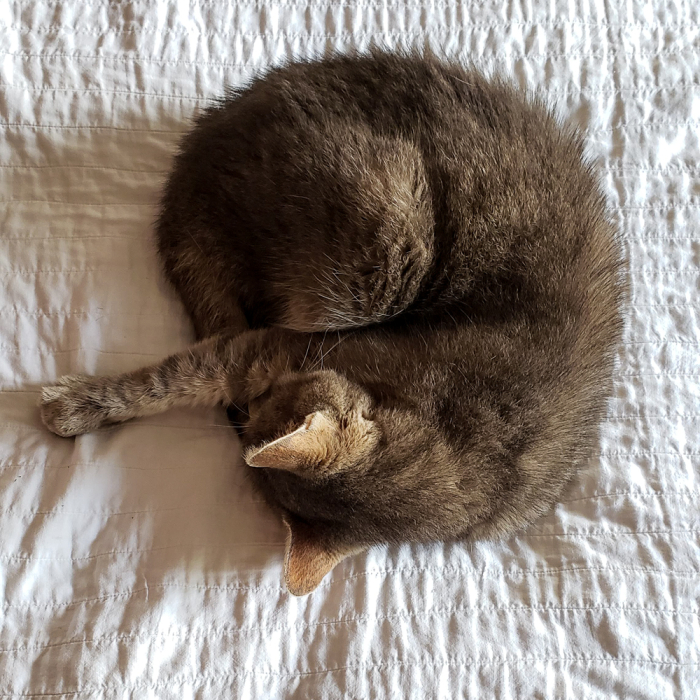 Super-chill. That's Duncan on our bed (I love the outstretched paw) -- a place that he's usually not allowed to be -- but I let him snooze for as long as he liked.

Ann and I had our first virtual Craft Date on Sunday morning! It was already wine time for her, but still solidly coffee time for me (I attended in my PJs). 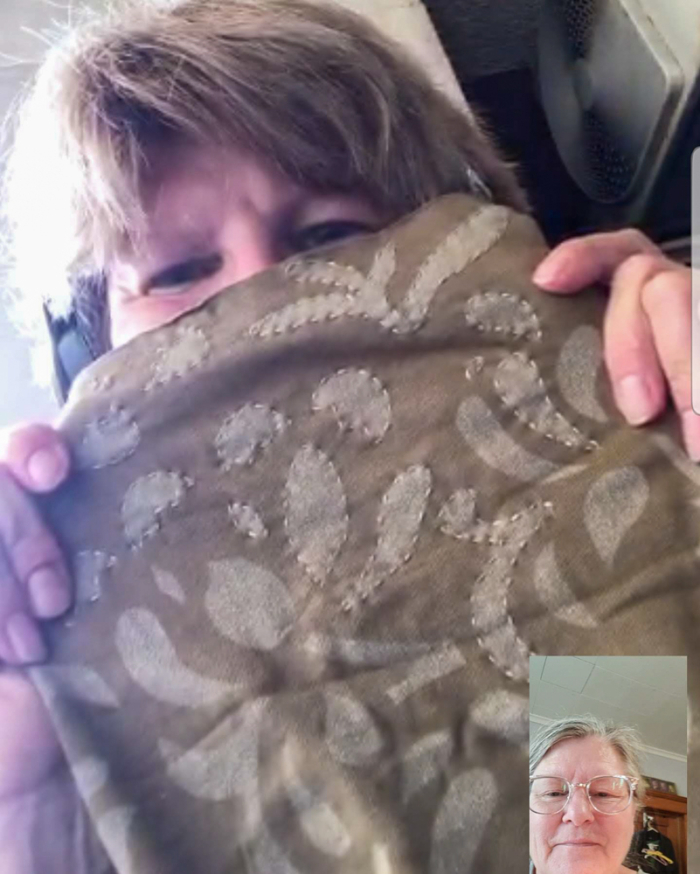 I can't believe it's taken us this many years to do this! She pulled out her long-languishing Alabama Chanin Swing Skirt and made good progress! I finished a little mending project and then worked on my Car Coat. We stitched and chatted for almost two hours! And we plan to do it weekly (as much as possible).

Beverly mentioned a few weeks ago on FB that on September 22nd there will be 100 days left to the end of the year! Since I've been thinking of launching another 100-day project, anyway, and I've brought some of "my stuff" out, I think that's an excellent time to start again. Between that (at least :15/day) and weekly craft time with Ann, I should make another pretty good dent in that project!

How was your weekend???

You crammed a LOT into your weekend! All good stuff and I think it's great that you and Ann are crafting together virtually - talk about the wonders of our modern world!

That spider is terrifying! Thank goodness you followed it with a cute photos of the kids on the porch, your new glasses (looking good!), and a visit from a nice Airbnb guest/reader. Your Craft Date with Ann is a terrific idea - sisterly company plus getting stitching done!

Virtual crafting together - LOVE that! Your glasses look fabulous too. Those kids though! Look how BIG they are all getting to be. What a great pumpkin.

I'm trying to forget about the spider....that is terrifying! I saw one in my washing machine yesterday and had to get Fletch to kill it...then there was another one! I'm not fond of them but don't really like to kill them either...but couldn't handle it in the washer.

I have always found spiders fascinating, might be the spinner in me. Mind-boggling to learn spiders brains are so big they extend into their legs. Might explain why we sometimes have the troubles we do with knitting and the like.

That second spider pic was awesome, especially since he was at your house and not mine! Tell us more about how you and Ann connect for your craft visit. My BFF lives about an hour away and doing that virtually might mean more time for visiting and crafting instead of time in the car. Inquiring minds want to know if you used Skyp, Facetime or ....?

What a full of fun weekend you had! I especially love your new specs as well as your virtual crafting time with Ann! Brilliant idea!

I think the spiders of the world are planning a hostile takeover. We had a huge one on our porch who built an enormous web, and a friend in NJ had two big ones at her house. I don't mind spiders (as long as they stay outside), but this is more than a little creepy!

The spider looks like the big wolf spiders that live along the GSL and that grow to huge sizes. ick, ugh
How fun to be able to craft and chat with your sister whist she living is Spain! I always love to see photos of the kids. Ginny has quite a style of her own.

You're one of maybe half a dozen friends posting pictures of spiders. Must be their time of year!

So much good stuff, Vicki. But I can't quite get past GINNY'S HEELS!!!! Oh, my god. I just adore her. XO