Unraveled Wednesday: I finished a book! 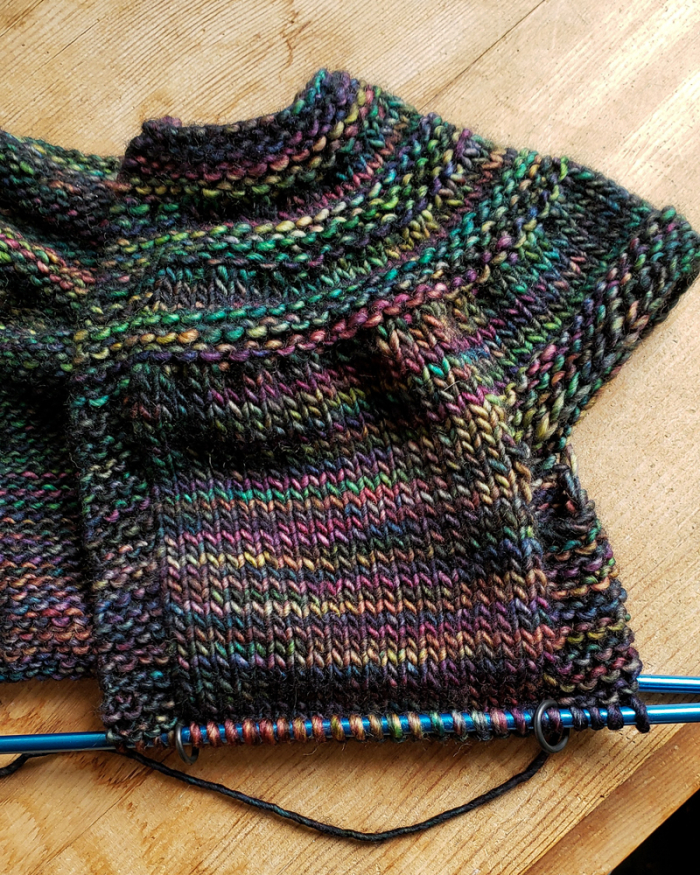 This is my fourth In Threes Baby Cardigan! I'm knitting it for the lady who lives across the street... well, more accurately, I'm knitting it for her first great grandchild who is due in November. She was so very sure that it was going to be a boy, but turns out, IT'S A GIRL! I keep thinking that this isn't "girly" enough for her, but I'll pair it with a onesie and some leggings and it'll be AWESOME FOR A GIRL in a way that doesn't assault you with the "girly."

I cast on some years-old gradient yarn (dyed-in-the-ball) for some socks the other day, but decided that they'd look stupid, so I ripped that out last night and cast on for a hat! Tamarugo (a free pattern), inspired by this one, but it's pretty great in a bunch of yarns/colorways.

I finished The Summer Walkers last night! I enjoyed the appendices as much as the stories. It's a pretty fascinating history, and I was delighted to recognize some of the Highland Travellers' and Pearl-Fishers' locations and places in the book, and have even visited to a few of them.

I've been listening to The Unwomanly Face of War: An Oral History of Women in World War II by Svetlana Alexievich.

An Oral History of Russian Women in World War II... which I found via recommendation by Lauren on Instagram (but I can't find the post right now). Influenced by my mother's interest in Russia -- she even visited as a college student (in addition to being the mother of five) in 1974 -- I was also fascinated as a high schooler, mostly by Russian women, but also completely frustrated in the lack of any useful factual information (any information, please) given the times. What were their lives like?? I remember wanting to write a report, but there just wasn't anything to go on... One of the weird random (rare) tidbits I could find (and that stuck with me) was that physicians in Russia were much more likely to be women than men. Anyway, I think I went directly from Lauren's IG post to Audible and have been listening on my way to work most mornings.

That hat is so cute and I think I have a skein of gradient yarn to whip one up! But, that baby sweater is just adorable!

(and YAY for book finishes!) My fall reading queue is growing nicely, thank you!

I love that pattern and the yarn and think it will make an awesome sweater for a little girl! The colors are just wonderful, and I hope you'll get to see how great the little girl looks in it!

I think that sweater is perfect for a little girl ... and I know her mama, and great grandmama are going to love dressing her up in it! ...also, interesting books ... I am finding great joy in the non-fiction right now and that WWII title is intriguing. Happy Wednesday!

Love the sweater! I think it's definitely good for a girl (or a boy, for that matter). I don't care much for the traditional pastels when it comes to baby knits -- I like deep saturated colors!

I think that will be a perfect "little girl" sweater! Like Sarah, I don't really go for the "baby pastels" either, and much prefer COLOR. XO I thank you for pointing out that hat pattern -- because it's a great one.

I think that sweater is girl-y enough for sure, and I'm looking forward to seeing what you pair with it for a onesie. I'm glad you enjoyed that book, it sounds fascinating.

Oh I love that Little Girl Sweater - PERFECT!! Like others, I'm not really into the pastel baby colors, but these jewel tones speak to me. It will be perfect with a onesie and leggings! And thanks for the link to the Hat which looks like a great pattern (bonus, my little brother's first wife is from Chile - will be a neat gift for her as well as the kids!). Your reading seems filled with excellent choices!

Love, love, love the sweater! And that hat...yes! I don't usually knit a hat until January but you've got me thinking! :-)

I read another of Svetlana Alexievich books a couple of years ago (Secondhand Time) and found her oral histories of people alive during the Soviet years to be completely fascinating, too. She won the Nobel in 2015 (I believe). The cardi is darling and looks very girly (to me). I love the dark color with the pop of pink.

Oh, that yarn is KILLER. Wouldn't mind a cardigan made of it for myself. (Not an order, just a comment.)

(Well, and a question: what is the yarn and where do I get it?)