“Through the historical perspective of craft and ‘women’s work,’ the pieces in the exhibition will at times speaks on feminism, environmentalism, and politics, while at other times pull back remembrances of home, comfort, and familiarity.” 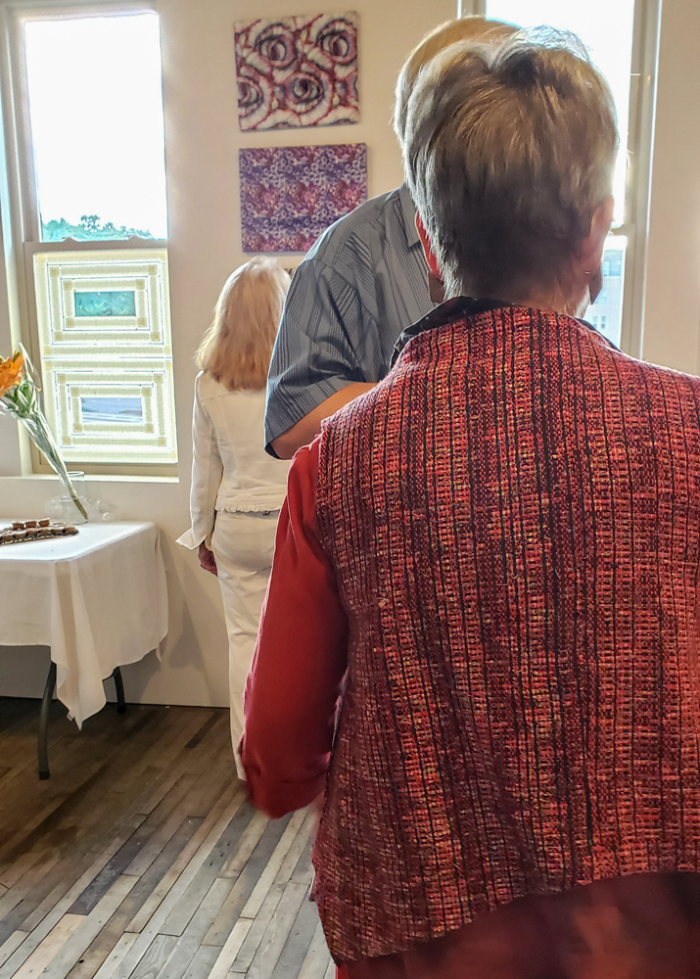 Alison Gates is a professor of Art and Women's & Gender Studies at UW-Green Bay (also a knitter, among other things). I've known Pat Filzen for many years; she is pictured above wearing a vest made from one of her woven pieces. Heidi Parkes is a Milwaukee-based quilter; I've been following her on IG for quite some time.

I was very excited to learn that Heidi was also presenting an all-day Visible Mending Workshop on Saturday, and was quite possibly the first person to sign up! 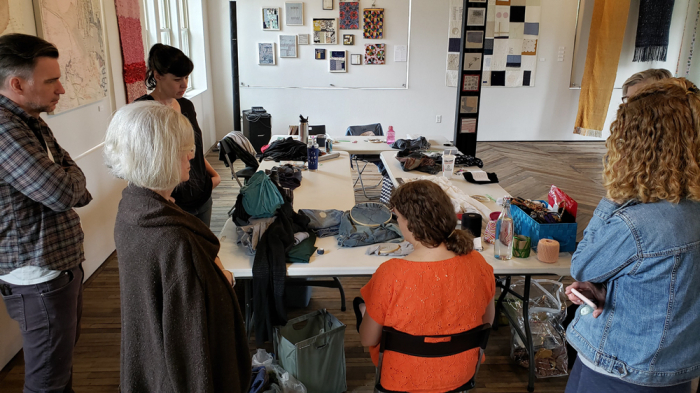 I expected to learn a little... I wasn't expecting to learn A LOT!! It was a great workshop and I'm so happy that I attended. 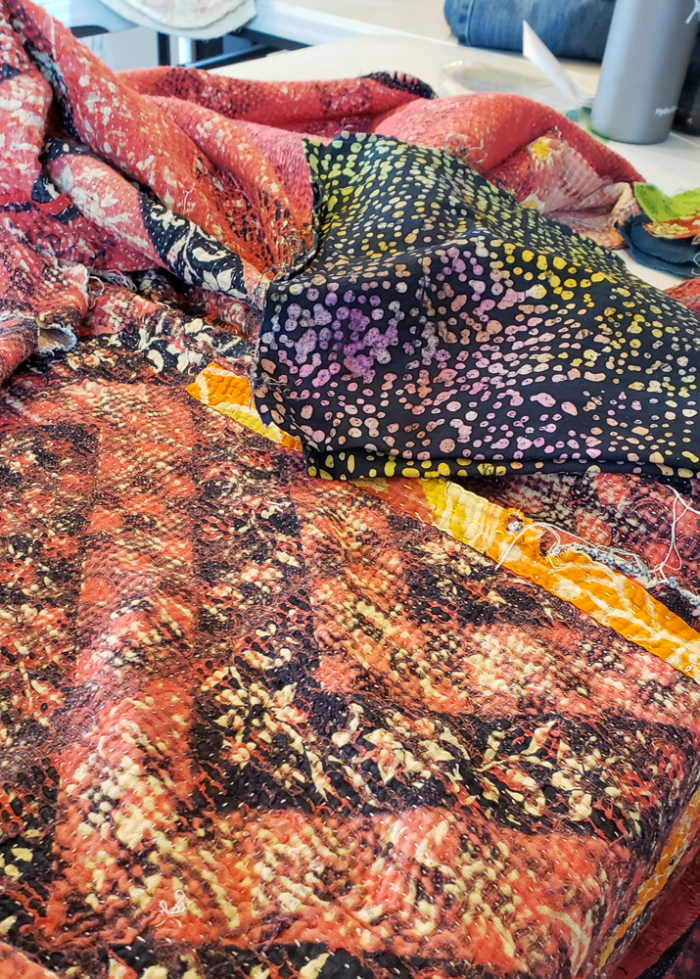 This family-favorite Kantha Quilt belongs to Sarah, and was damaged a few years ago by her Husky puppy! The nature of this quilt makes is perfect for "visible mending" and, perhaps it doesn't seem like it would be very difficult... but one of the things we learned with this piece was how to make a repair to something like a quilt when fabric is actually missing (having been chewed). The rest will be all about choosing fabrics (the fun part!) -- though there are also lots and lots of small tears to mend, so hopefully not too tedious. 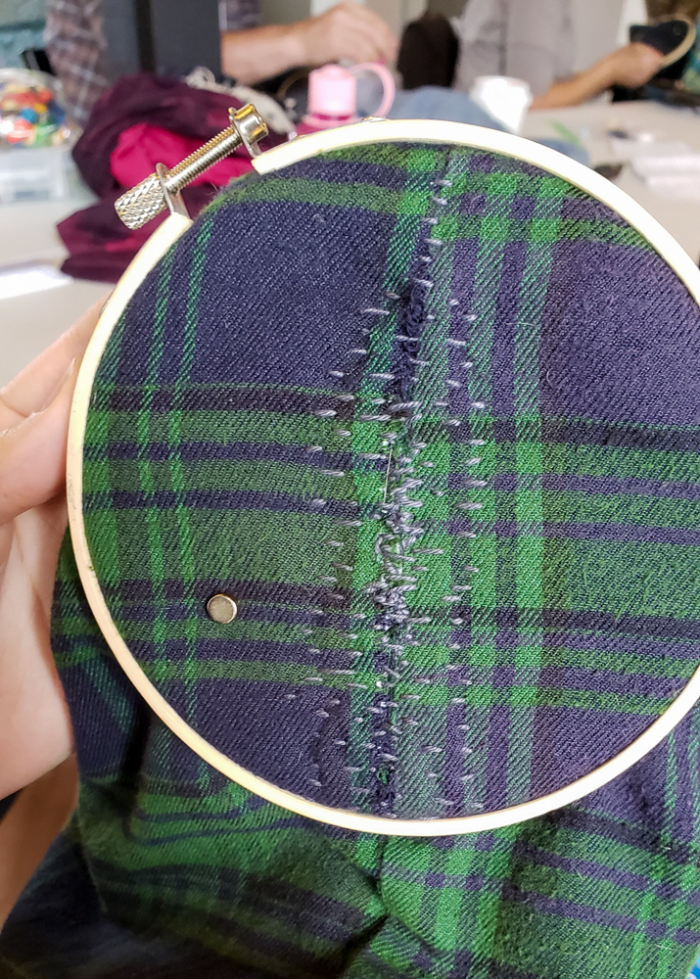 This is a repair that Lisa made on her husband's pajama pants. He's an accountant... so this "visible" mend was made... um, with subtlety. From Lisa, I learned about using tiny magnets on my work as a needle keeper! 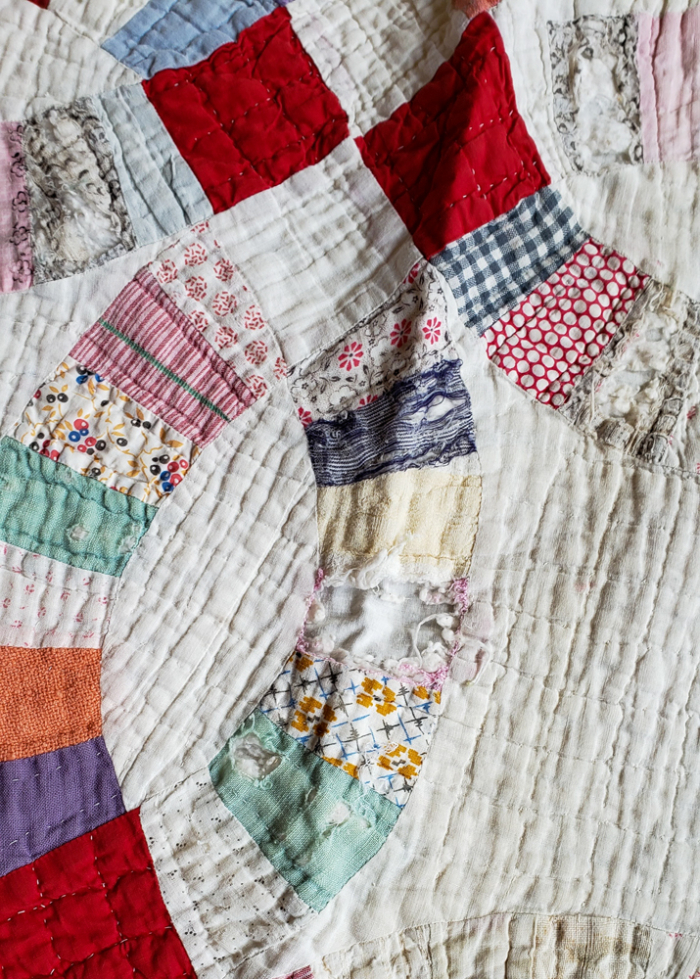 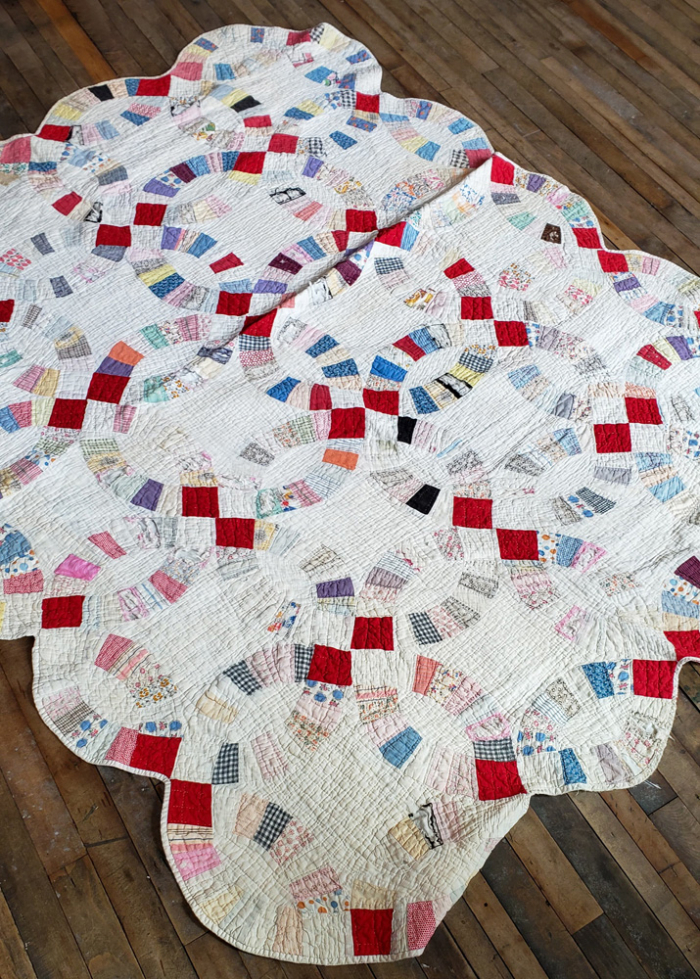 Deb bought this antique Double Wedding Ring Quilt at an estate sale, and there are a number of fabrics in various states of... disintegration. (Oh, how I wish I'd taken more photos!) She'd made one little repair in class, a brighter pink square on the left just below center (above a red square and between pink-ish squares on either side). She'd observed the most obvious fabrics needing repair/replacement, but discovered in class that there are many others.

I wish I'd taken photos of the jean jacket that Cristian was repairing... it's his favorite! (Kate's known him for a few years and she knew exactly which jacket I was talking about!) Heidi had previously worked on it for him and, by continuing that work, Cristian was pleased to be making it a collaborative project. 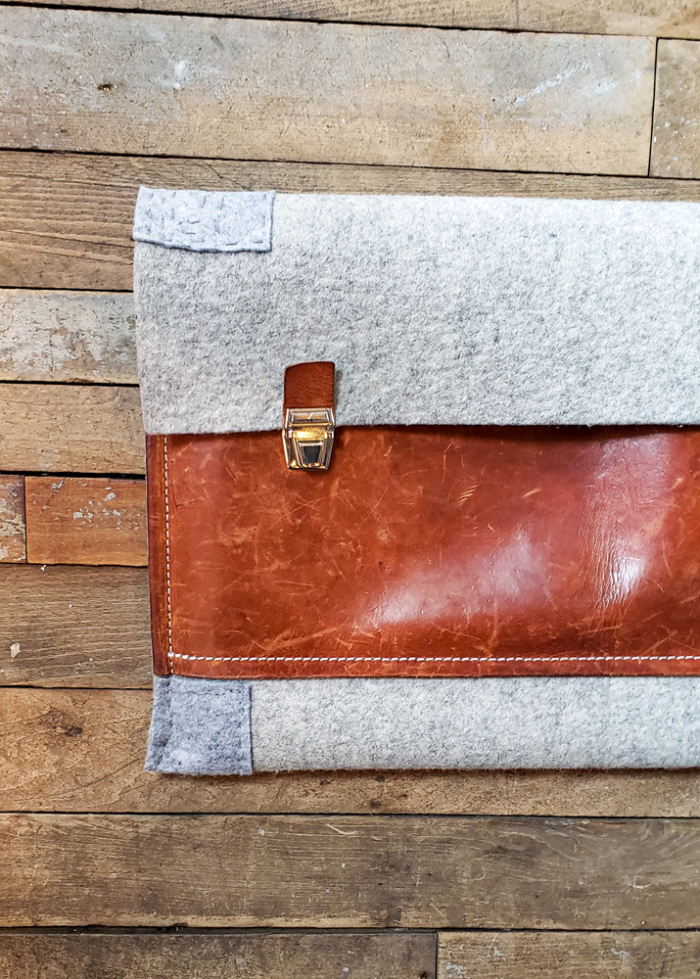 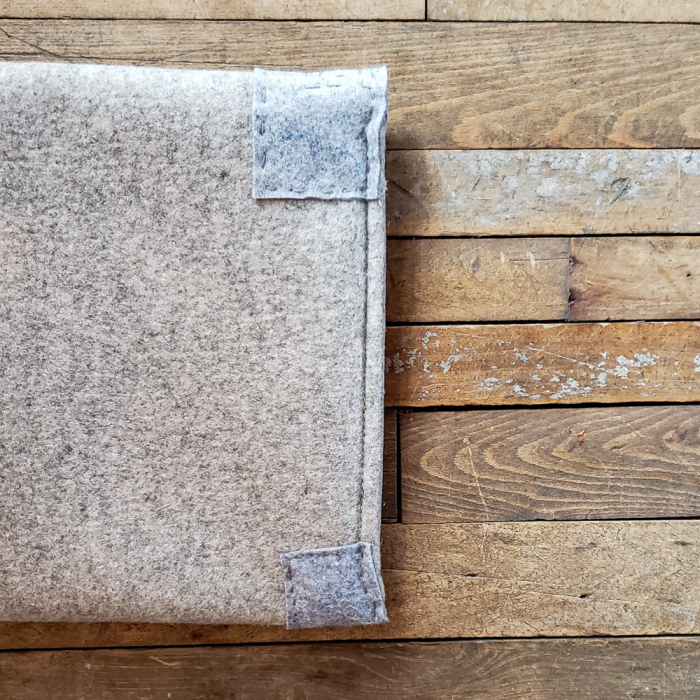 One of my projects was Kate's laptop case. She bought it from a maker on Etsy several years ago, and would have likely purchased a replacement if he could have been found. It was a great project for class! I repaired two damaged corners, noticing and proactively patching another small tear in the process!

I left the workshop with a start and/or guidance for a couple of other projects that I'd brought... and ideas for several others at home!

Sunday was a bit dreary, but I went downstairs and cleaned up my dye studio a bit and even threw a few hanks into the pot. 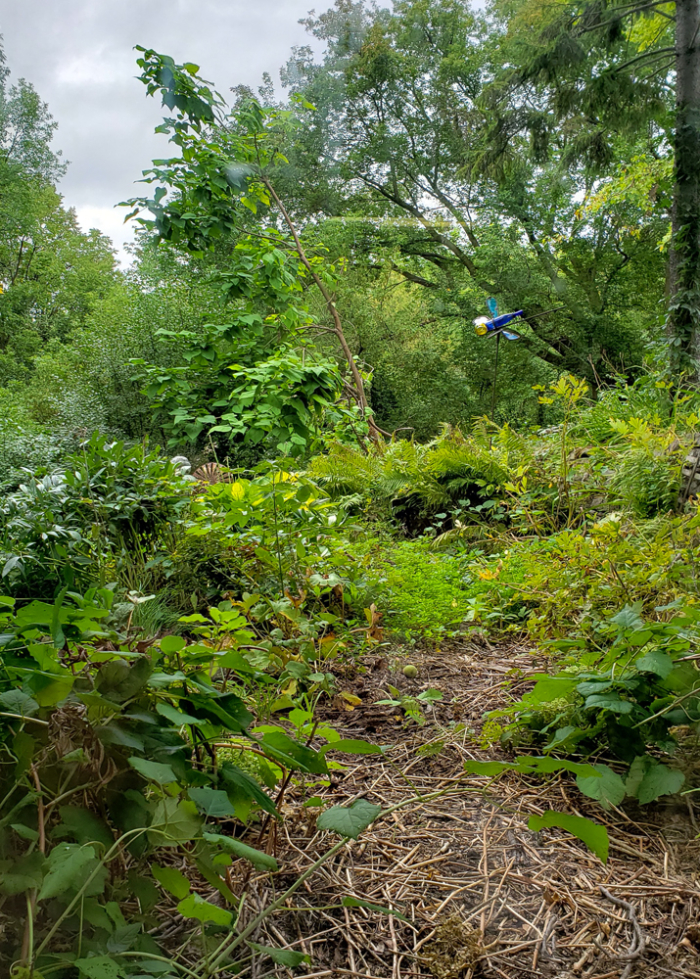 This view is usually full of hydrangeas in the foreground, but they suffered from house painters and electricians over the summer. Storms didn't help, either. Among all the greenery, you might make out a young catalpa tree (the more distant one with huge leaves) missing some branches and listing quite to the left... a big box elder had fallen onto it. 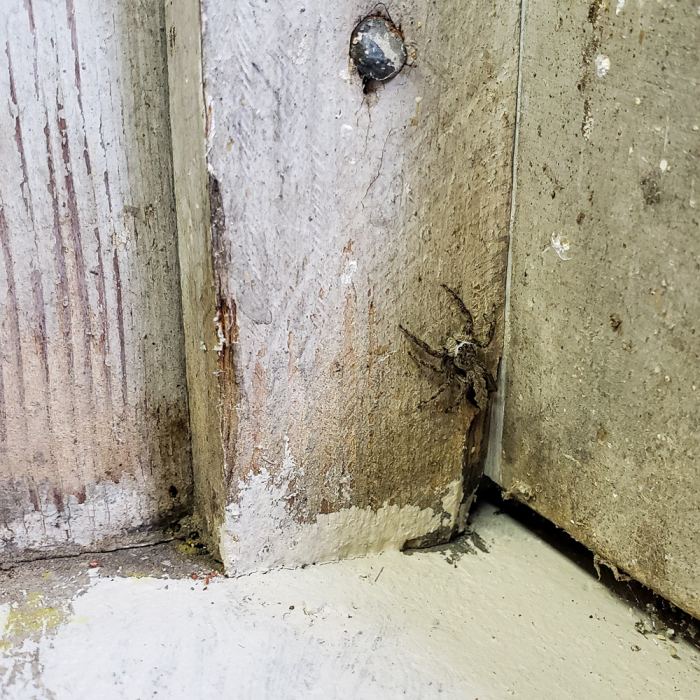 I first saw this guy when just three legs were visible in the crack between the window and sill. To be honest, I tried to "get" him, but I missed. Then I got busy doing other stuff and he came out... and kept his distance. We'll see how long this "relationship" lasts... I'm not a "spider person" in the least!! That's going to count as my Macro Monday photo because Ali thought it was as big as a tarantula when she saw my photo on IG! (He's sorta big but not THAT big.)

Lastly, it was the 111th anniversary of my maternal grandmother's birth yesterday. Marcella -- or Marstella ("Mary of the Stars") (pronounced Mar-SHTEL-la by her German-speaking mother, according to my mother) -- died at age 57, when I was 8. She was into needlework of all types, and I wish she'd lived long enough to have shared that with her... so I could have proudly shown how neat my needlework was on the back! Haha. One of my treasures is an embroidered pillow top that she'd partially completed, and that I eventually mustered the nerve to finish -- it took a few years! I have very few photos of her, but my favorites are the wedding photos. Happy Birthday, Grandma!

You attend the best art exhibits, and that workshop! I have a wedding ring quilt of my grandmother's that is in much the same state as the one you showed. I can't say I will ever mend it, but it's nice to know that I could. I love your laptop case mend; it adds character! I really need to check out some visible mending books.

I enjoy seeing your blue bottle dragonfly, but not so much your arachnid friend. He looks huge and mean! Happy Birthday, Grandma - what a lovely name and photos!

I don't even know where to start with this post - there is so much goodness in it! Well, except for that spider. He is evil and you can have him. I love that mending workshop you attended and the photo of your grandmother is just gorgeous.

I thought it was tarantula when I saw it on IG, too!!!! I about freaked the f--- right out!!!
LOVE the mending workshop. I need to try some visible mending. I've been collecting a few things in need of repair. Now I just need to make the time!

That exhibit looks so interesting! I think visible mending appeals to me so much because it is, by its nature, inexact and rather freeform -- perfect for someone like me who has no sewing experience! And honestly I think I like the pieces better with the mending. It really adds character to them and you get a sense that they've been used and used well.

That portrait of your grandmother is a stunner!

What a beautiful photo of your grandmother! Love it. That spider though - you can keep him/her. It looks NASTY. What a great workshop you attended. Love you repairs to the laptop case (and what a fabulous case it is - whether or not in need of repair). I just started knitting last night the my skein of Make Do yarn - LOVE it!!!

I am deeply jealous of your visible mending class. I've been wanting to try Kantha stitching and recently concluded that I'm going to have to just dive in because I haven't found anyone with knowledge or skills to share.

I am in awe of the mending workshop! Brilliant! I would absolutely love to take a workshop like that!

(and I am with Carole on that darned spider! Yikes!)

I'm in awe of all you accomplished. I had to read the post twice to make sure I didn't miss anything. The mending workshop was exciting to see. My mom always said, "If you learn one great thing at each class you attend then it is worth the price of admission." The repair of the laptop case is so nice to see. Sorry for the loss of the hydrangas. That spider is so creepy looking. I would have escorted him outside. Your picture of your grandma is wonderful- she was so pretty and young when she married. Isn't it lovely that the love of needlework is in your genes!

The mending workshop would be amazing and it's right up your alley. You did a fabulous job of saving Kate's laptop case. The repairs make it all the more chic! Learning from your grandmother would have been wonderful, but how nice you have memories of her. The headdress is stunning.

I love that you have so many exhibits and classes (and the energy!) to experience and share with us! ...and I'm really happy you're back in the dye studio!

My son is forever ripping his pajama pants; I needed that workshop!