Nightmares From Down Under
Five Days In

The Garden Room menagerie increased by one on Friday -- Miss November joined the chicken, duck, and kangaroo planters! I couldn't resist her.

They'll soon be displaced by plants. Maybe I'll move them down to the dye studio. 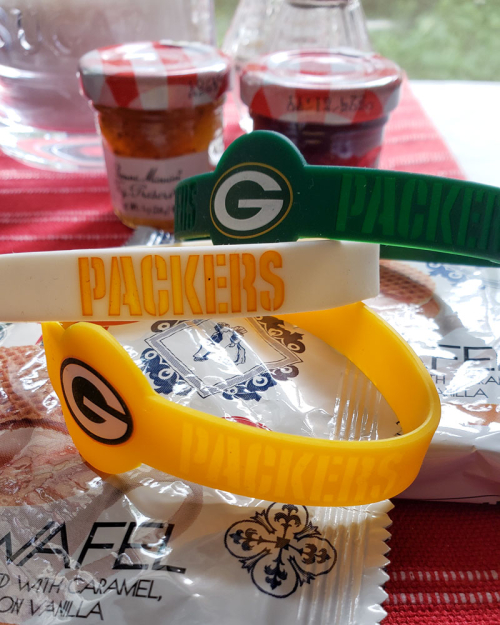 We had Packers fans in the house over the weekend. I've picked up a few things here and there in preparation for our guests (especially on sale/clearance because NFL licensing is no joke). I even picked up some rain ponchos, and they were needed yesterday! It's a gorgeous day today, though, and our guests are off for a tour of Lambeau Field before heading to Chicago to catch their flight back home to L.A. 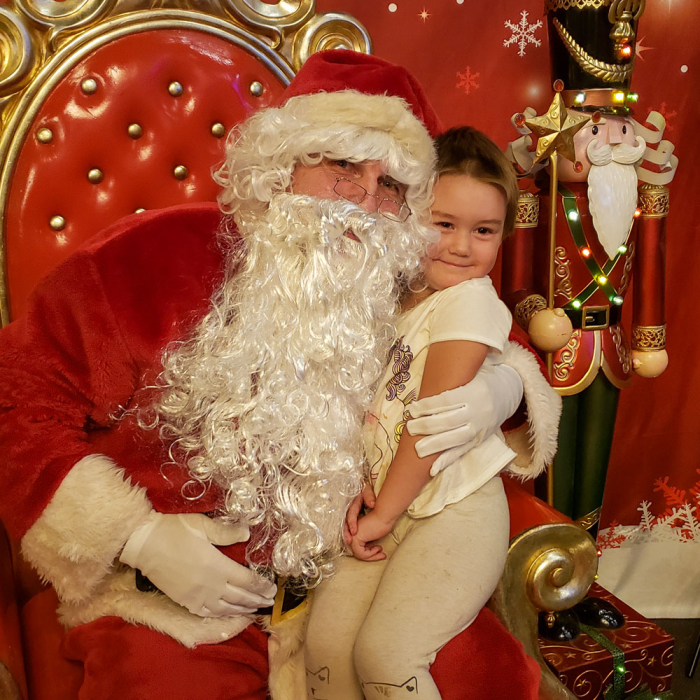 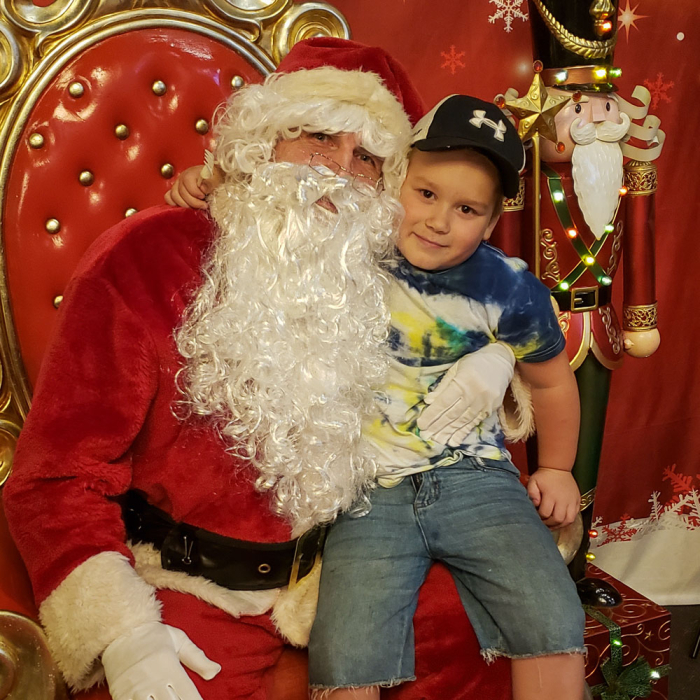 Do not adjust your calendars! It's still September, and the kids had a visit with Santa on Saturday! It was part of a fundraiser for a local guy who goes all-out with his holiday display but needs to relocate it. Junah was totally into it... threw his arm around Santa's neck, and is obviously very animated in the discussion of his wish list. 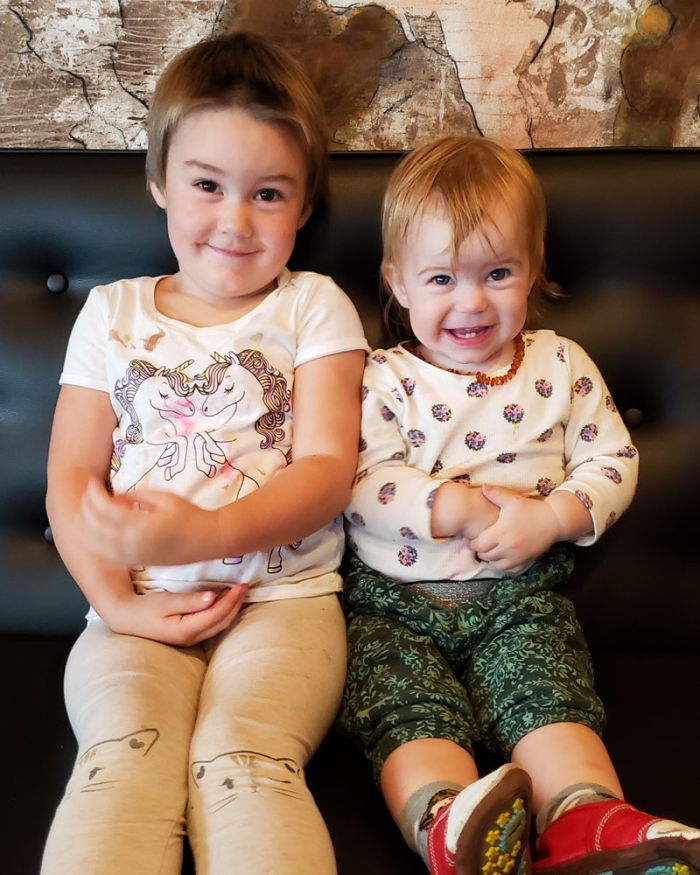 We also stopped in at the Fall Market at 313 where I had the incredible good fortune to snap a photo of the girls at the exact right moment -- they last an approximate nano-second! Ali & I both went home with some lovely bouquets, too. 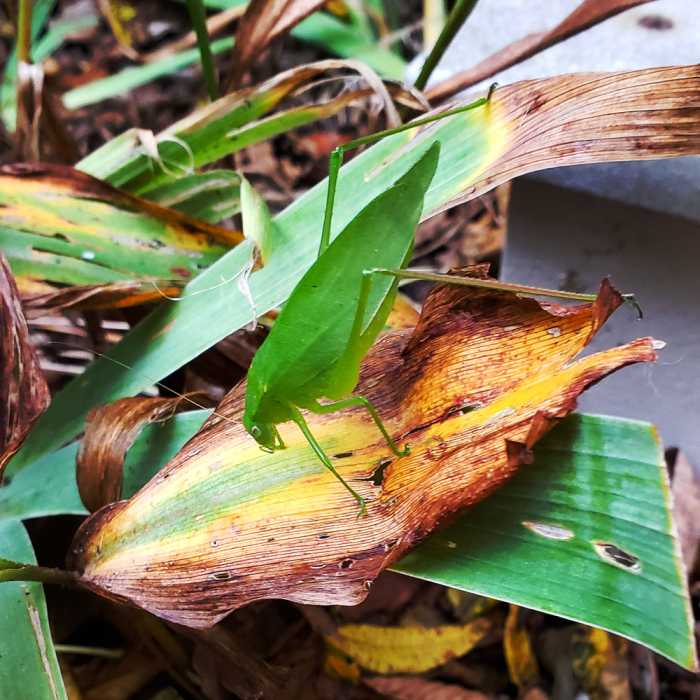 We were super happy to find a walking leaf-type bug in the back yard!

On Sunday, I puttered... I did some dyeing, finished popping out the cut pieces of my Large Paradise stencil and rolling it up for later, (mostly) reclaiming my worktable, washing some Alabama Chanin cotton jersey yardage and other laundry, chatting with my sis (no stitching with her yesterday, though, but I did fold some laundry), watching the football game, weaving in ends on some cowls, stitching, and ending with the Emmy Awards. 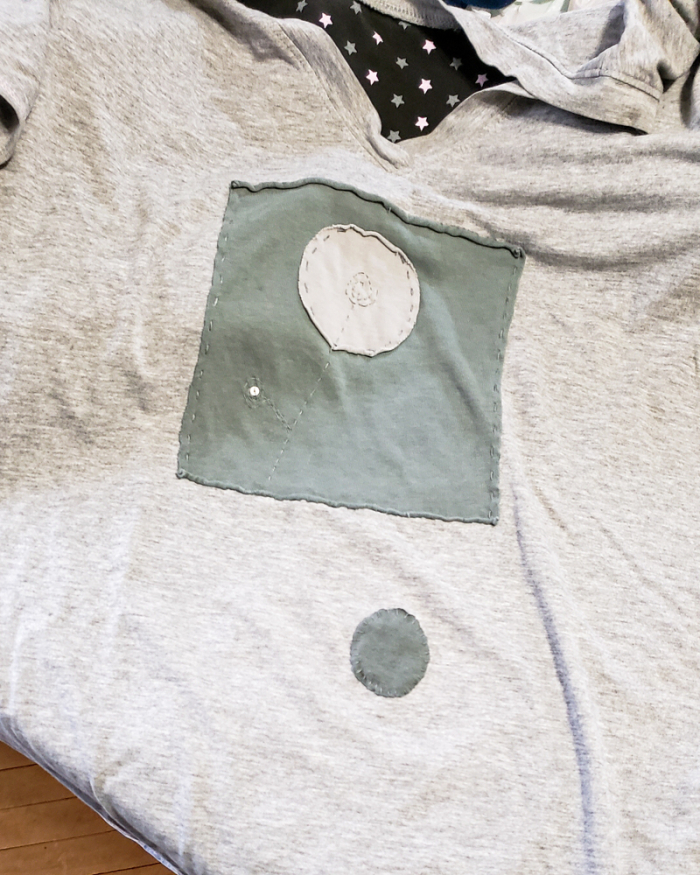 I started with the patching of a hole on my favorite PJs (very small hole, very large patch!). I continued with the first of the second 100 days of stitching (mostly) on my Alabama Chanin Car Jacket... it ended up being a bit of a false start, a half-hour of stitching that came right out. Today will be better!! #100moredaysknitorious2019

Tonight, we'll continue (with last night's episode) of Country Music | A film by Ken Burns on PBS. We are loving it! Neither of us would ordinarily be called "country music fans," but we are truly "fans of music"... all types of music! As with any other genre, there's good and bad, things you like and things you don't, things you listen to more or less... I don't really get it when people say "I hate {fill in the blank} music." It's all so fluid...

I hope you had a great weekend!

Yikes!! Christmas pictures...but they are SO adorable (are those kitty kats on Gin's leggings???). They are all so expressive. I haven't "watched" all of the Country Music film, but it has been on, so I've heard it (I just find it difficult to sit for that long). As with other Ken Burns endeavors, it is just so good! I've seen Roseanne Cash speaking a lot. I've learned a lot too.

You find the best planters! And even better than planters are Santa photos and that wonderful one of the girls. Congratulations on capturing them! I hope your second 100 days of stitching are both fun and productive. I really enjoyed seeing your steady progress the first time around!

That picture of your granddaughters is priceless - and I know just what you mean about the photo opp lasting a nano-second! I also love the Santa photos because Santa means love whether it's September or December. We haven't watched the Ken Burns country music show yet but we plan to and we ARE big fans of country music so we're truly excited about it.

Oh, Vicki! What a whole lotta great stuff in your post! From Miss November to the (pretty sure) katydid to Santa and flowers and kiddos . . . and those SWEET little girls!!! Oh, thanks for sharing all that! XOXO

That pictures of the girls is so adorable! Their faces are simply the best - great capture!! I also love Jun's enthusiasm with Santa - I wish I"d have been a fly on the wall to see that conversation! Haha!

Those girls are so precious! You must've been really lucky to have snapped them both looking and smiling at the same time!

A very busy weekend. Love all the pics of the kids😉. I am enjoying Country Music also even though I am not a country music fan. Just the insight into people’s struggles makes it interesting and I may just be a convert!

That photo of the two little girls is a treasure! I would have it matted and framed and hanging on my wall :-)

Ginny seems perfectly comfortable on Santa's lap! The kids are so fun. Love that pic of the sweet girls! I agree with you about music. So many of the sounds of music are blended and take from one another is ways that make it all so familiar and American. I love it all!