My girlie took off early Saturday morning for a long road trip. She's in Upstate NY now --  not far from Rhinebeck, actually -- and will soon be headed to Brooklyn for the Friday night opening of Paradeisos (art by Yulia Iosilzon, curated by Kate) at Carvalho Park.

After she left, I finished prepping The Artist's Perch for guests arriving later in the day. 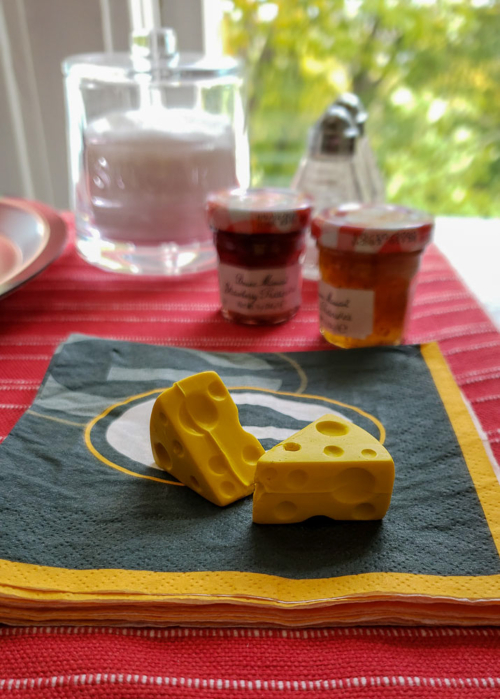 And after that, it was time to play!! There were a couple of things that I didn't get to when I was in Michigan. Rusty helped me set up a work surface and we brought an old desk up from the basement for all the stuff. Next time, I'll arrange this differently... for better flow and in an effort to avoid this: 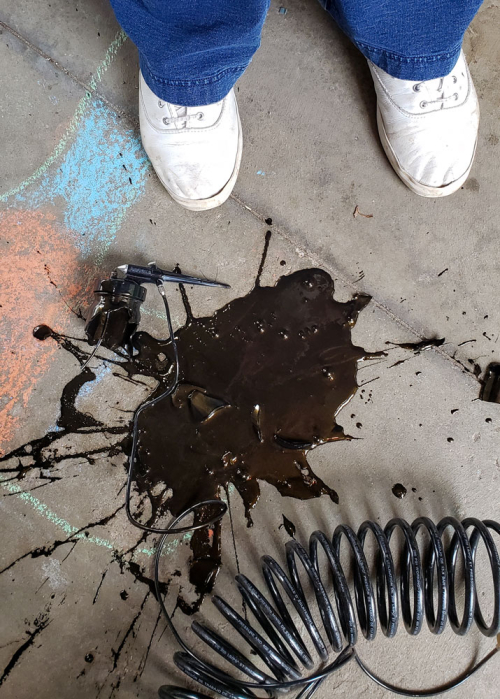 The second time in as many weeks that I smashed a jar of paint on a garage floor. The first time it was on Kym's floor, with "white gold" paint... and much less of it. This time it was on mine, with a nearly full 4-oz jar of "black gold." Yep. 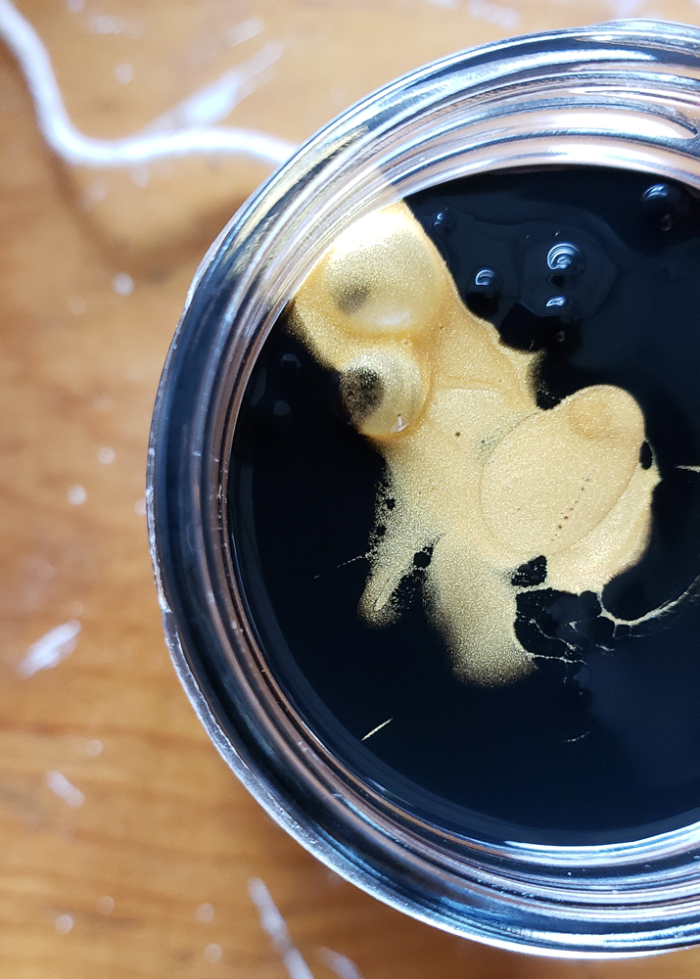 It sure is pretty, though.

My goal was to paint a couple pairs of Palazzo Pants. I wasn't intending to make two pair, but my paint swatching revealed that my initial plan for ochre & navy -- while a gorgeous color combo -- wasn't going to work for me for a number of reasons. 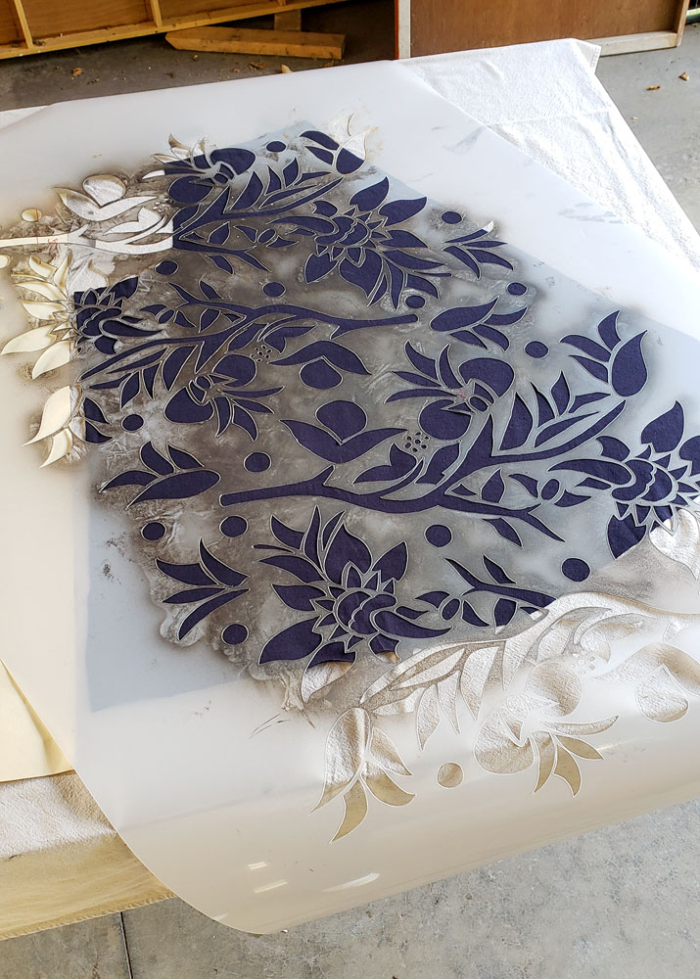 I decided to make a single-layer pair of PP from the navy blue fabric (which was already cut because... navy & ochre was the plan), painted with a dark-silver color. I am calling these my Holiday Party Pants, because I intend to have them finished for wearing to all (one or two) of the holiday parties I'll be going to this year! Haha. All I need to do is sew the seams and attach the elastic... and they'll be done! If I'm inspired and/or have time, I may do the tiniest bit of embellishment, but I don't have to do a thing if I don't want to. 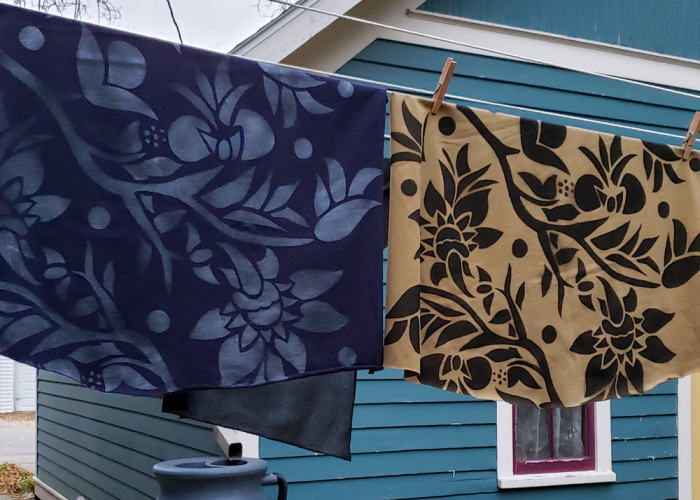 The ochre layer, already cut (ahem), were painted with the ill-fated & re-mixed black gold. Those pieces will eventually become a double-layer pair of PP, with ochre on top and black (which needs to be cut) on the bottom, worked in negative reverse applique (in which all of the ochre/top layer, save a 1/8- to 1/4-inch border around each motif, will be cut away). 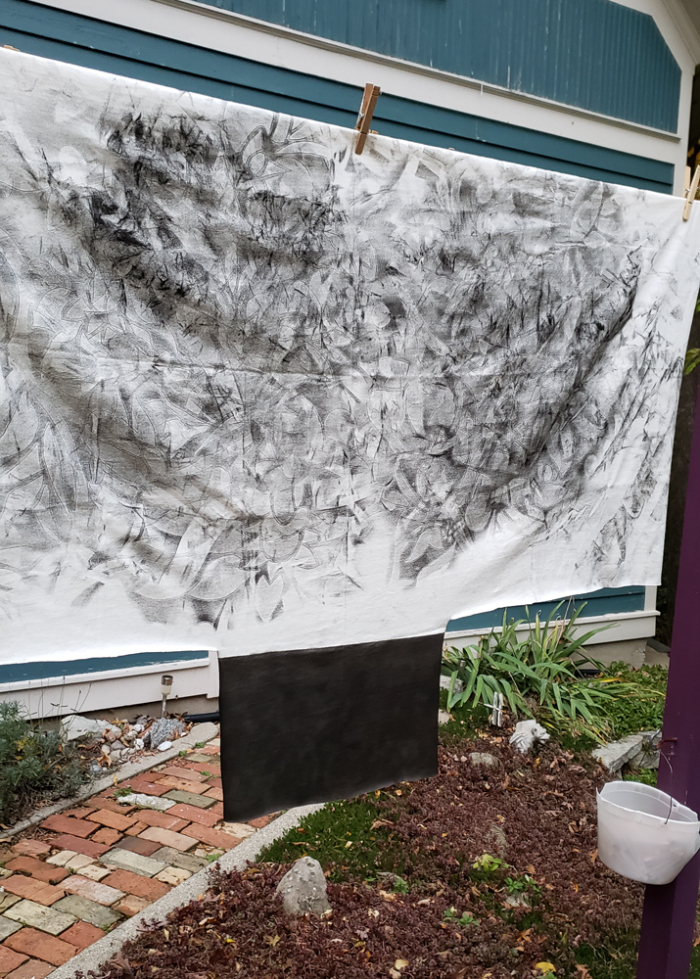 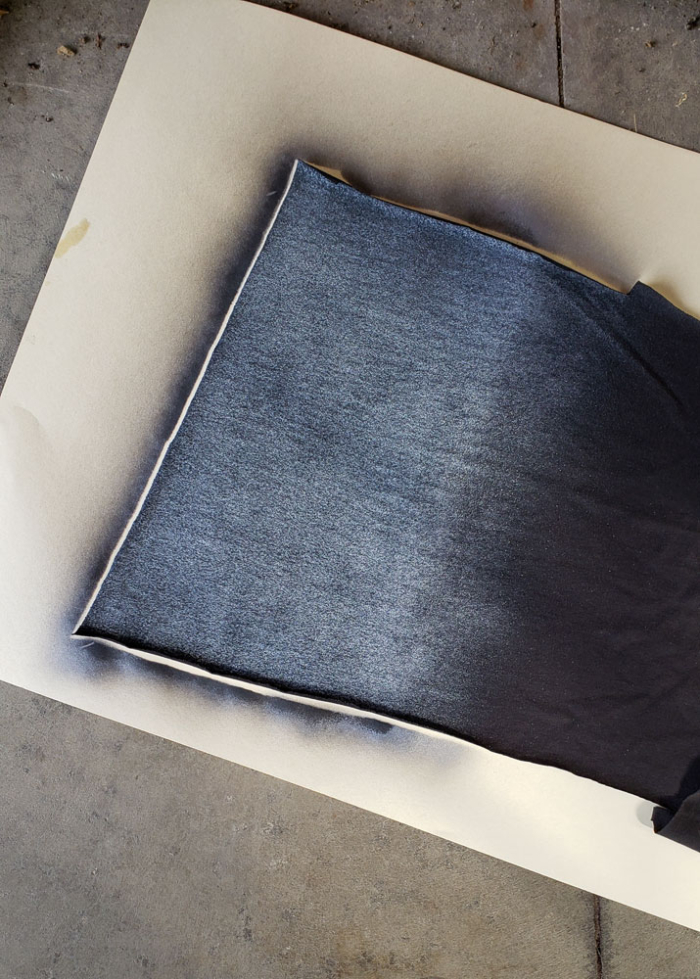 I also made another "rag" piece, and used up paint on other pieces/sections -- the silver on black may be used on the Car Jacket project (that's what I had in mind, anyway).

Speaking of the Car Jacket: 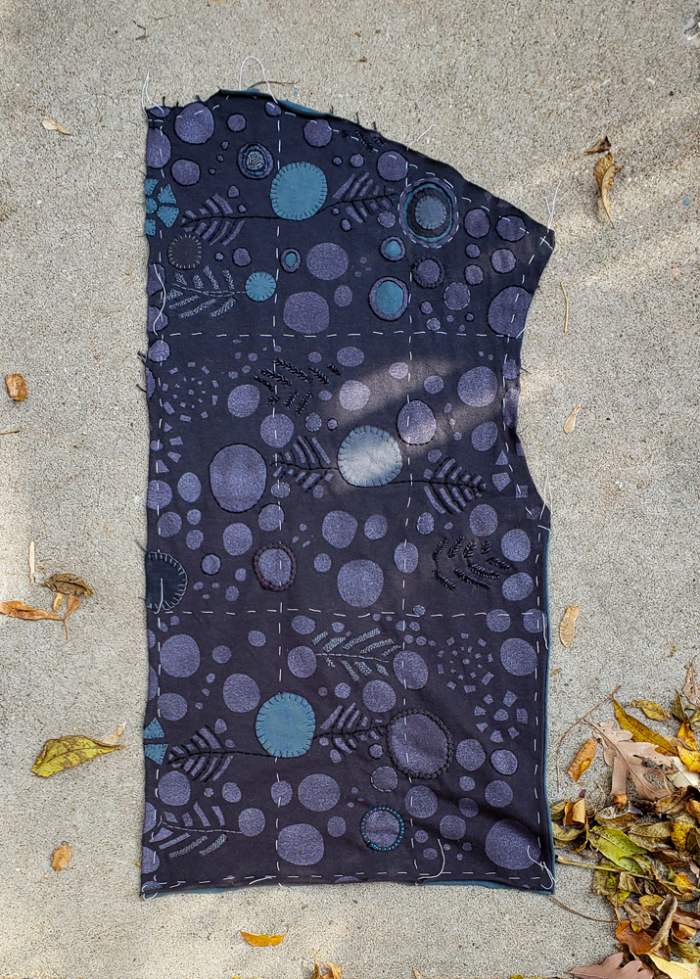 There were a few days in Michigan, and a few since I returned, that I didn't work on it at all; but there were other days when that's all I worked on, so things are progressing. Typepad is being a jerk today, occasionally timing out when I try to load photos, but you can see on IG as well as here (if you look closely) that I tried another new color of floss. I'd ordered both Eggplant and Teal a while back, thinking that they might find a place here. The colors were a little overwhelming, looking at a whole spool of floss, but Kym shared a tip for matching thread to a project that I thought would also apply here, and that is to unwind a bit of the thread so you can better see its true color in relation to the fabric.

Sorry about the broken paint, but you and Kym may have the most beautiful garage floors around! Love those PP and also the eggplant and teal. They are all works of art!

Kate has made quite a name for herself!
Ooo-ooo-oo! I love the ochre and navy! You're idea of cutting away the ochre will be fabulous! Kym's point is spot on! That bit of color for the couching fit right in!

Vicki, the fabric and the jacket-absolutely gorgeous.

No use crying over . . . spilled paint?! At least is was in the garage! So, for your pants (and other things, I suppose) you can actually just stencil and paint fabric? You don't have to always do embellishments to make them AC? I guess I didn't realize that until now.

I am loving your PP plans! and the teal floss you've added to the car coat might be my favorite thing yet (especially with the couching ... for sure my favorite embroidery technique)!

I love the paint on my garage floor! It is a perfect souvenir of our week together! :-)
XO
(You've been so much busier than I have. My painted pieces are still laying there on my dining room table. Just like they were when you left. . . ) :-O

These pieces are so inspiring! I love the look of AC-style stuff -- I just need to learn to sew!