So, y'know one of the main excuses reasons for our quick trip to Arizona was because Rusty's brother found more old photos, documents, and scrapbooks. 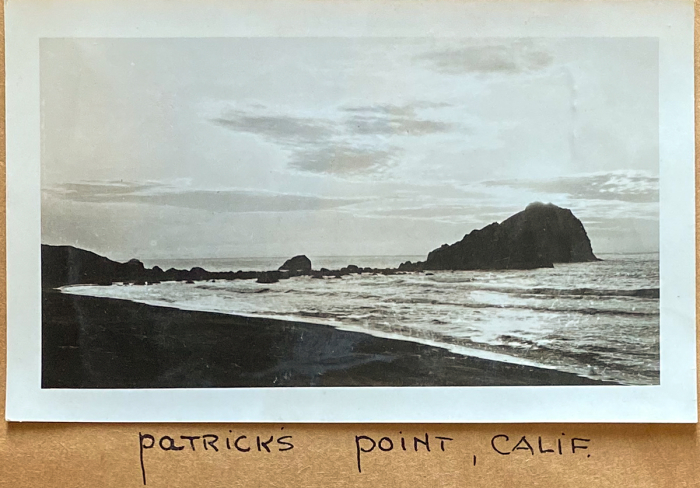 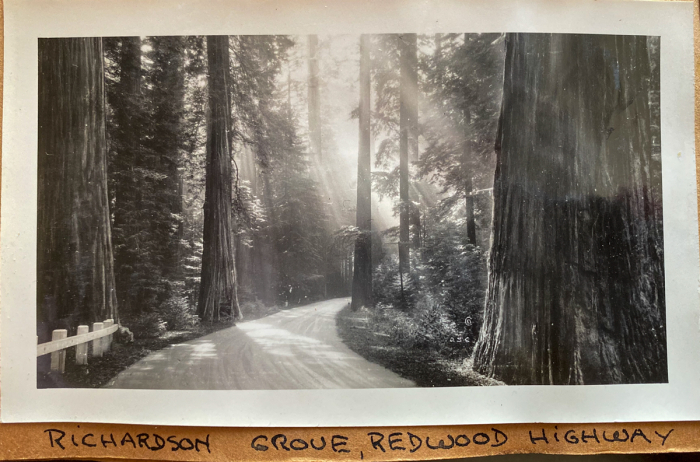 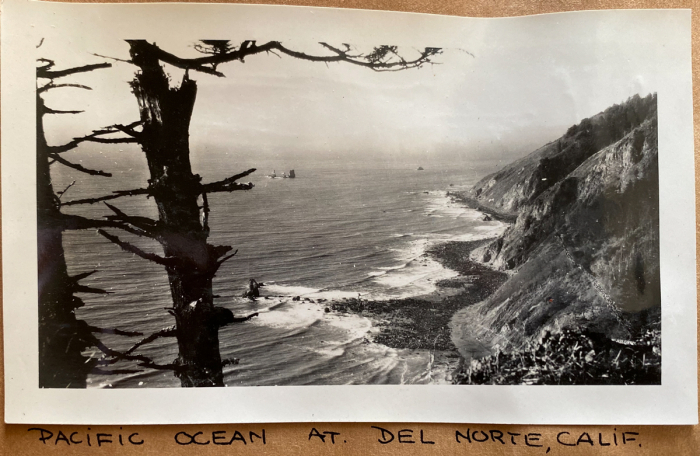 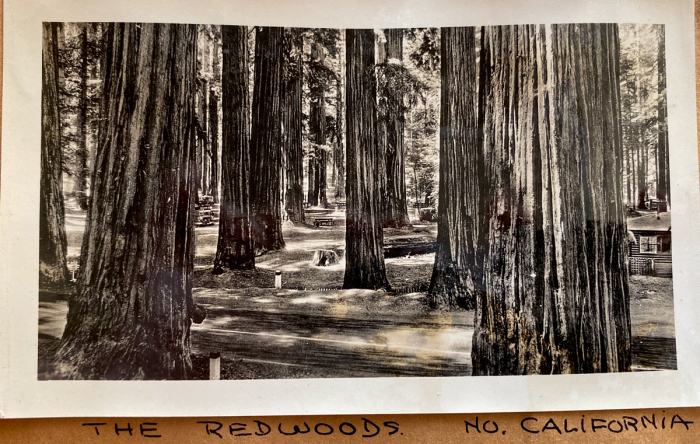 Rusty's mother was born in Worcester, Massachusetts, raised in Providence, Rhode Island, and lived most of her life in California. For a few years in the '30s, in her late teens and early twenties, she apparently went back and forth between the east & west coasts at least a few times, including Florida (as the boys recall, though no photographic evidence), working at resorts. From the looks of it, she had a lot of friends and a lot of fun, too! 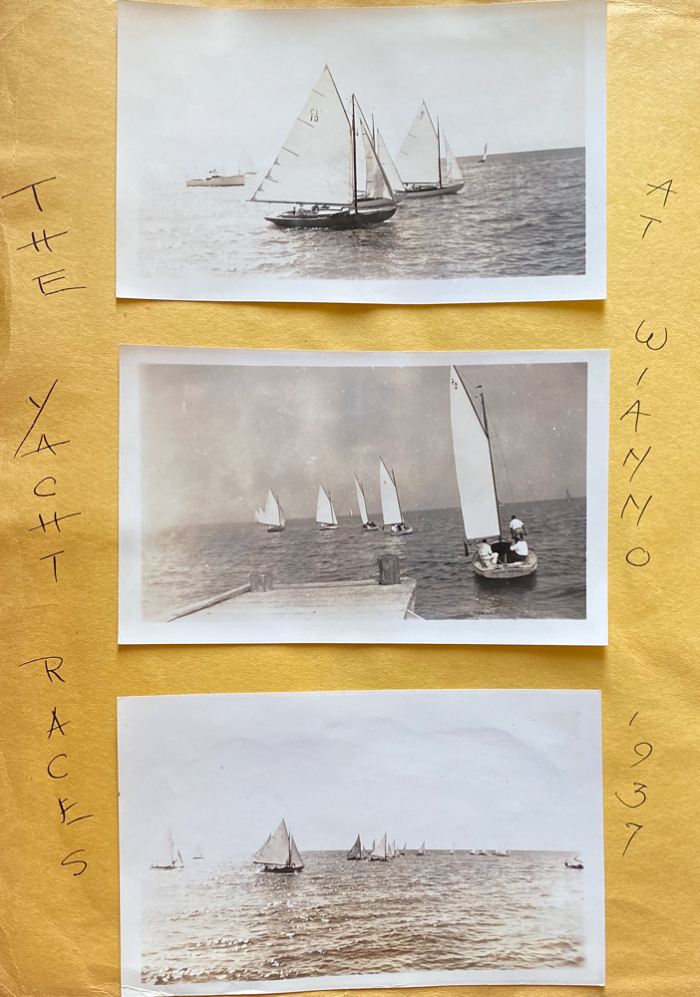 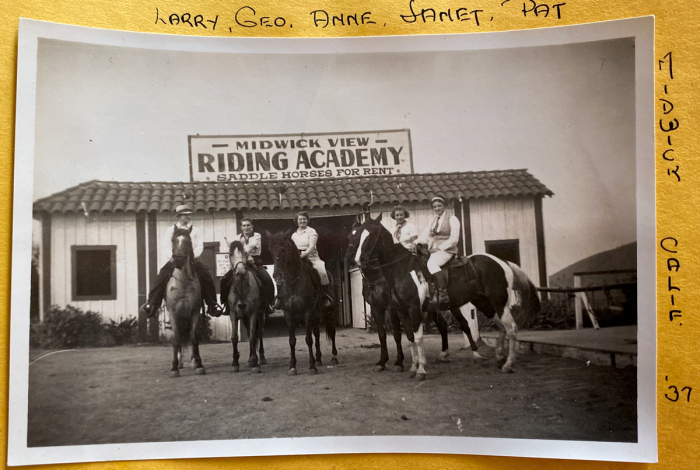 The Wianno Club is in Osterville, MA, on Nantucket Sound. We have a couple of small serving bowls from the Wianno Club, ca. 1937, I guess, with their logo on them.

Midwick View Riding Academy sounded "east coast" to us, so we were happy to find the photo above clearly identifying it as a place in California... possibly part of Midwick View Estates.

There are a few curious things about all this...

One being that this was all during The Great Depression. Yacht races, riding academies, and multiple cross-country trips... these are not things that normally come to mind when one thinks of The Depression.

Another is that I'm fairly certain the travel would have taken place on land rather than by air, but there's not a single photo of anything between the coasts.

I believe Rusty's mother's parents were very well off... but there was a scandal involving his grandfather, which disgraced the whole family, and ultimately resulted in their divorce by 1941 (and bad enough that his son & namesake legally changed his name!). And maybe, at least for some of this time, Rusty's mother was just away at these places... sent to camp, or whatever, to protect her from the scandal, and not actually working? I mean, they sure seemed to have fun (and a lot of free time) at work... There are SO MANY casual/fun photos at these places, with one or two friends, or in big groups... at the beach, on the dock, poolside, in cars, with dogs, snow skiing, horseback riding, hugging, smiling, laughing, sightseeing...

It's all so curious!!

These pictures do reflect people having lots of fun! When I went through my Mother's scrapbooks and things after she was gone I found several intriguing and slightly scandalous letters. I pursued this for a while until I decided that I would really rather not know details. Maybe every family has some very curious things hidden away!

These images are so awesome! I think my sister has some pictures of my Nana in Milwaukee right after the end of Prohibition - she was with a group of women and they were crying tears of joy because the men had work again driving the beer trucks! These images make me want to track those photos down!

Ooooh Wianno! Swanky. Osterville is one of the more exclusive places on Cape Cod.

Great photos and a little bit of a mystery. It's had to imagine flitting between coasts back then!

Those shots of the redwoods are particularly stunning! I love that these photos have inspired a bit of a mystery!

Oh, that's just fascinating! The photos are just great -- and so nicely set out in scrapbooks, too. These adventures (whatever they were. . . ) must have been very dear to have the photos/memories preserved so lovingly. (And those Redwoods photos! WOW!)

Isn't it interesting to discover (gasp!) that generations before us led intriguing lives? All the more so for lack of details. I know there are a couple of family secrets in generations before me, the sort you hear just enough to know that if people wanted you to know about it they would have told you. Still, intriguing.

those are wonderful photos, and I LOVE the mystery surrounding the family! My mom says that EVERY family has secrets ... some are just more willing to talk about them ;-)

My mother-in-law's family is from Providence. They had seven kids and the parents died when my MIL, the baby, was around 9-10. We have heard stories of her older brothers running numbers for the mafia and other interesting things. Who knew! Their last name is Wnuk. Fun to learn the family secrets!

Those photos of the Redwoods and the California coast are beautiful and so intriguing. When we went through my mother in laws home we discovered interesting photos of her vacations in Cuba back in the 1930s with her first husband, my husband's father. I also found an amazing red silk dress with big black flowers on it. Very slinky and sexy that she wore. It was more like a slip design than a dress with extremely thin straps, and worn without a bra. She must have been stunning in it with her platinum blond hair. By the time I met her there were still traces of this woman in her but definitely toned down.