Things are just not happening in a timely manner lately... or least not how I've come to expect. 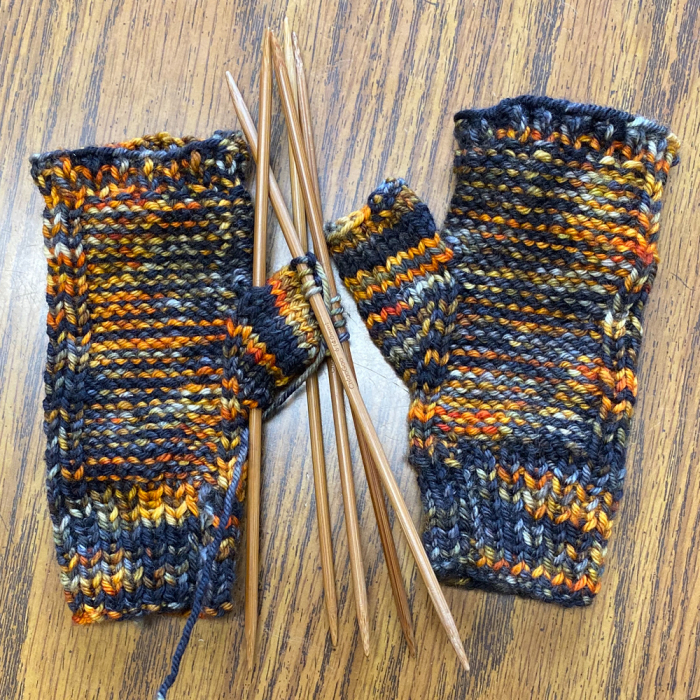 The knitting is slow going, too, but I'm THIS >< CLOSE to finishing the fingerless Maize Mitts for Junah. I had him try on the one that was finished the other day and, he was SO EXCITED!! That kid is knit-worthy in spades!! I picked up a couple pair of "magic" mittens and gloves to go along with, just in case he needs to double up sometime.

I continue listening to The Unwomanly Face of War: An Oral History of Women in World War II by Svetlana Alexievich (audio). It's so good, but it's long and there's a lot of "stuff," so I'm glad I'm giving it space.

I finished The Bright Hour by Nina Riggs on Monday night. It was the topic of book club last week (and was my book choice) and I hadn't even finished it myself (I was SOOOO close). It was a good book and made for some great discussion...

It's just that this one was un-put-down-able:

Blood: A Memoir was compelling. It's an incredible story of love... difficult to even know what to say about it. Allison & her sister Shelby are incredible humans.

Sadly... and I'm a little bit stunned... as I finished The Bright Hour, I learned that another young mother of two, Kate (35), was very recently diagnosed with breast cancer and that it has already spread to her liver, which severely limits the traditional medical options available to her. I met Kate & her husband, from Australia/New Zealand, at cooking class in Rio de Janeiro! I've followed her on IG since then, including her journey to motherhood (twice) after being told that she was infertile. She's overcome a few "impossible" things already. So, I've given to her campaign to raise money in order to seek other treatment options, and just thought I'd mention it in case you had a spare dime or two, too.

This post... is so full. Sending all the love and healing mojo to Kate. Oh man. Life is so fucking unfair!

Kat is right, your post is full of all the good and bad things that make up life, but the bad ones are so heartbreaking and unfair. Admiring Junah's mitts and sending healing wishes and a donation.

Interesting books. I have seen these titles but now need to look at them more closely. My book group will be choosing books next week. And darn - life is so very unfair. Cancer is a horrible disease although I think progress is being made.

Those mitts are adorable. And great reading suggestions this week, too. I followed your instagram link to Kate and I sort of wish I hadn't - how heartbreaking. It's a reminder to all of us to be thankful every day.

I love Junah's mitts. The colors make me think of the Starry Night.

I'm so sorry to hear about your friend. Life can be so unbelievably unfair sometimes.

Junah is so fun! Looking forward to see your families antics this season! This is the season of giving and for us it means giving to those in need. Thank you for the link, Vicki. This is also the season of hope and we must keep hope alive.

I'm so sorry to hear about your friend, Kate. Cancer is heartbreaking -- and especially when it strikes someone so young and so vibrant. Sending all the good juju. XOXO