I think about writing a post like this almost every month, but I haven't actually done it since February! What?? Taking my cue from Bonny, here we go for December...

Anticipating... a trip to Milwaukee tomorrow afternoon to pick up Maddy & Viv!!

Cooking/Eating... we did really well with Thanksgiving & leftovers! Rusty made a great turkey soup (he's been doing soup so well, he's now the default soup maker). We also inadvertently enjoyed one last delivery of Plated! I'd received notification that they were ending subscription deliveries and considered having one more delivery -- it was my first meal delivery service and has always been my favorite. In order to see all the menu selections, I had to click on the "unskip" for the week... I didn't actually see anything that I was dying to try, so clicked away. Next thing you know, I had an email a few days later about my upcoming delivery! I'd forgotten to re-click "unskip." Oh well, they sent some good chicken dishes (we are just about poultry'd out around here). Now their meals are available in stores -- but currently none close to me. 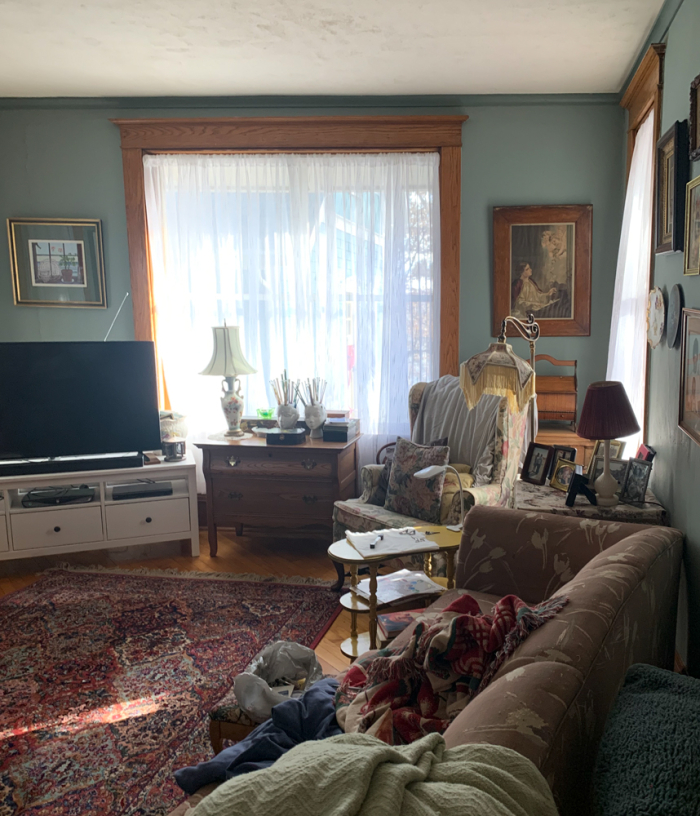 Enjoying... a brighter living room! We've lived in this house for over 30 years and, for most of those years, I've had off-white ruffly/lacy curtains. It's an old house, I have old stuff & antiques, and they fit (more or less)... but they were looking tired and dated (in other words, I was sick of them). It was long past time for some updating and brightening! Last year, I replaced the curtains in the adjoining "front room" with simpler white sheers, and did the same in the "living room" a few weeks ago. The color is the same but the curtains in each room have a different/complementary woven design. Kate sent this photo one morning last week -- so much light!!! Even in the dark hours, those white curtains make everything look brighter. I'm getting ready to retire/replace/update some of the stuff on the walls, too. (I have a nice, light gray canvas cover for my circa 1985 "tulip" sofa but it was in the wash. I wouldn't mind replacing the sofa, too, but it has such good bones!)

Excited about... our local Christmas parade tonight! Turns out the big kids don't want to be in the parade, so Ali will drop them off and we'll walk down to see it. New this year, a "sensory sensitive section" on the parade route where the sirens and horns will be silenced and the music will be quieter. I think we might go see another small parade on Saturday night so Viv can experience the joy!

Knitting... I haven't started anything new since I finished Junah's mitts. I have a few ideas rolling around in my head, but... see "Sewing."

Looking forward to... a springtime vacation! It's not until March, but we firmed up plans and booked it last week... I like having things like this to look forward to! We'll be returning to Todos Santos. It's been five years since we were there together (for our 30th anniversary), though Rusty's been there for work a couple of times since. He'll be working a bit on this trip, too, with a special gallery event in the works... but not working too much! I found a great Airbnb super close to the beach... and I'm already feeling better about winter (and the light begins to return in less than three weeks!).

Organizing... is on my to-do list! I really need to get a grip on the gift situation.

Planning... Christmas dinner... we're thinking Beef Wellington! I made one with my mom several years ago and it turned out great.

Sewing... my worktable (my entire workroom) is a complete disaster so there hasn't been much happening in there. I have a couple of small sewing projects that I'd like to do for Christmas, though.

I love these types of posts, they cover so much about what's going on in real life. I also love seeing your living room from that angle. Sheers are my favorite window coverings! Have fun at the parade, too!

I also enjoy a post that covers multiple things going on in ones life. You've had a lot going on (as usual) and much to anticipate. The look on Maddie's face when she sees the kids is going to be priceless! Your room looks cozy and inviting. I love the sunlight coming through the curtains.

Another fan of the Currents post here, too! and oh my goodness, has it really been FIVE years since your Todos Santos trip? congratulations on 35 and another fabulous vacation!

OMG...so Much in this post. My favorite is the line about light in a few weeks! Excited for Maddy & Viv to arrive (tomorrow!!). And we Must see pics of the Party Pants on Friday! So much joy in your world. It's wonderful.

So.much.good in this post! Yay for Maddy and Viv being home (hopefully for a good bit!) I love your living room - all that light is glorious!

I love Right Now posts and hope we remember to do one next month! Only one more sleep until you see Maddy and Viv; that is so wonderful and your hugs are going to be extra, extra big! Your lighter, brighter living room looks great. My advice: never give away a sofa with good bones! We did just that with one that the previous owners had left here when we moved in and I've regretted it ever since. We gave it to my SiL, she re-upholstered it, and it's perfect. She has offered to sell it back to me! :-)

You pretty much described the focus of my life at "and the light begins to return in less than three weeks!" Otherwise, we're on a merry-go-round of various appointments dealing with end of the year stuff and trying to sort out holiday things. Safe travels and a happy reunion in Milwaukee!

It always amazes me how much of a difference small changes can make, and it sounds like those new curtains are making a huge difference for you. More light is always a good thing at this time of year.

Wishing you lots of good times with Maddy and Liv!

I love your living room! So much light -- and such a lovely, comfortable place to hang out. XO Thanks for this great post, Vicki. It's so nice to catch up with you this way! Have a wonderful weekend.