I'm joining Kat & the Unravelers today to share what I'm knitting and reading.

But first... it was a crazy intense 3-day weekend of mostly doing book work + a birthday party, followed by a slightly disoriented Tuesday back at work!

I'd mentioned on Friday that I intended to sew some bat wraps and/or 'roo pouches over the weekend, but I didn't do any of that. And I'm not going to. I really should have known better!

I'll admit, I got a little carried away because my very own daughter is there, taking photos of actual fruit bats in need! But no. None of that is needed from me... nor from you nor from almost anyone else outside of Australia.

What is most helpful to Australia from here is money.

If stuff has to be made, it would be best all around to check with LOCAL wildlife centers, animal shelters, and/or humane societies to see what THEIR needs might be.

Is it too early to proclaim that Rusty is Husband of The Year?? I really wanted to write an Unraveled post today, but it's so lame without a photo... and I finished the first "starter" triangle for my second We Make Our Own Arrows shawl, so I actually had something I wanted to show!

Rusty's usually home in the morning, so I decided to ask him to take a couple of photos for me. This is what he sent: 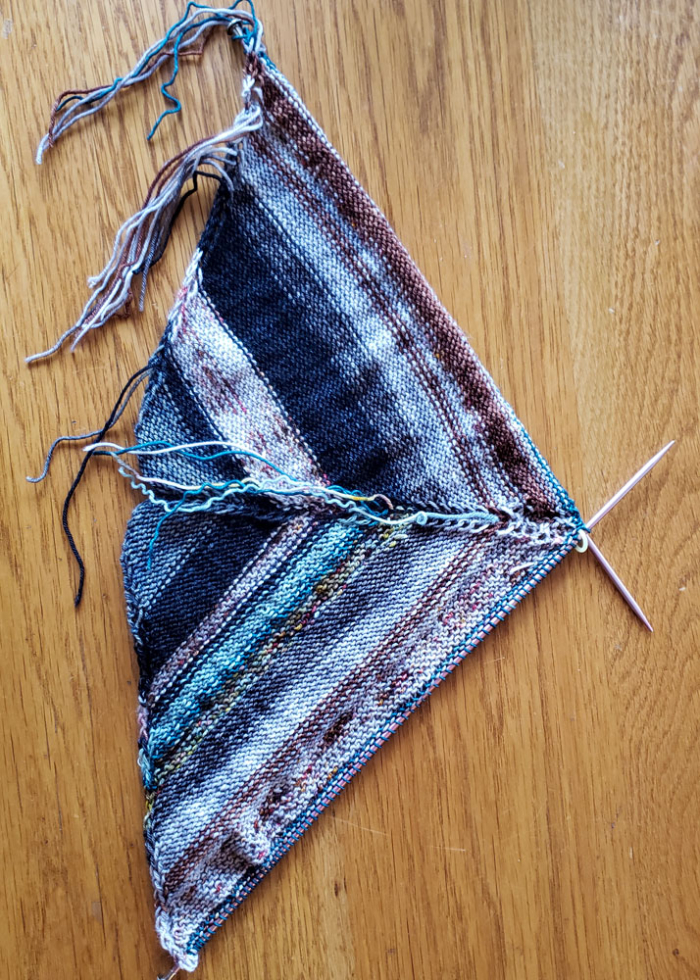 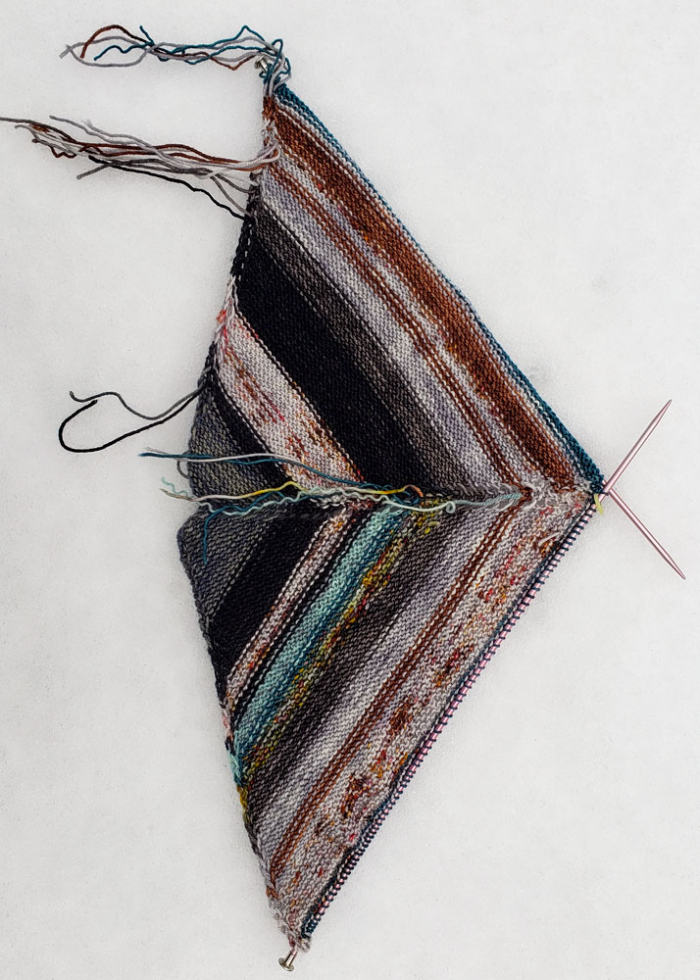 Impressed that he actually went outside to take a shot! But you can see it, can't you?

I replied: Almost perfect... do you think you could do the same but with the "right side" showing?? 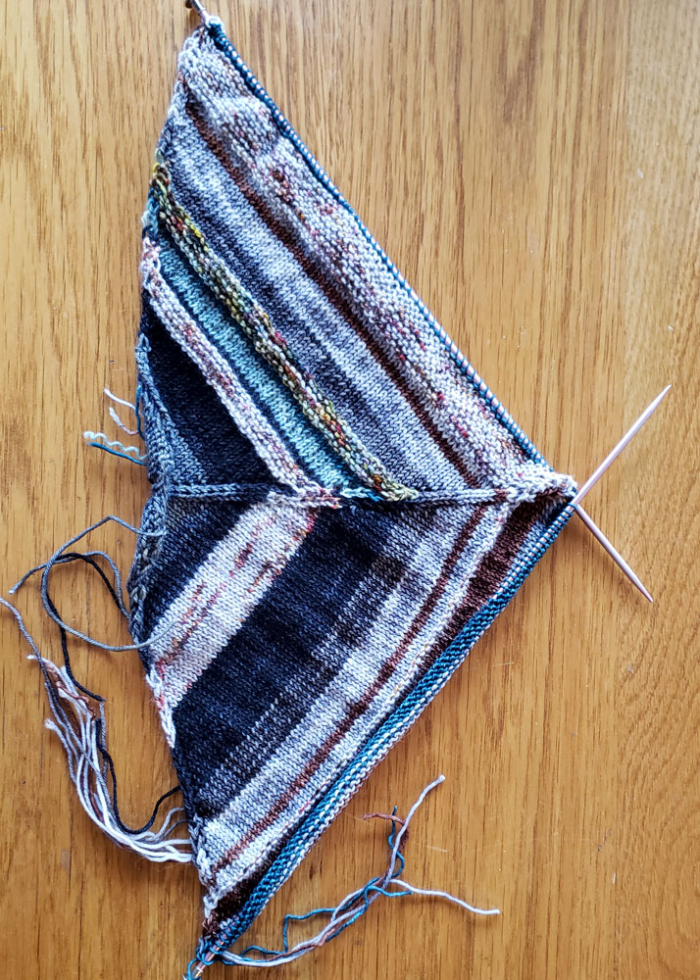 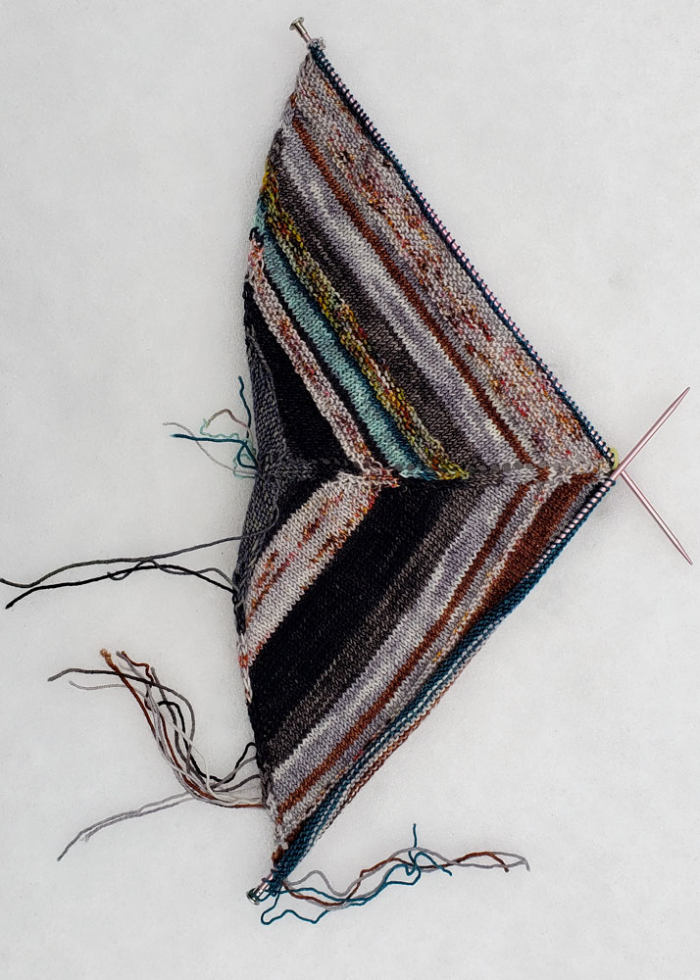 I had one false start with that piece, but I'm pretty happy with how it turned out. I'm aiming for "similar but different" for the next one. I'm weaving in at least a few ends on this triangle before I cast on for the second.

I'm a bit of a jack-rabbit to start 2020! While doing aforementioned bookwork over the weekend, I did a lot of listening... I finished The Unwomanly Face of War: An Oral History of Women in World War II by Svetlana Alexievich, listened to all of Crazy Brave: A Memoir by Joy Harjo, and I also listened to all of Autumn by Ali Smith.

I am currently, happily, settling in with Tom Hanks' performance of The Dutch House by Ann Patchett.

Fever gets my attention at night before I turn out my light and I'm going to have to start going to bed earlier!

Way to go Rusty!! I like that we got to see both the right and wrong side of your arrows. And thank you for what you said about the sort of help Australia needs. I agree completely.

Rusty gets extra bonus points for two different backgrounds, for both the original shots and the do-overs!

I need Rusty to give Marc a few lessons ... oh boy do I miss having Katie around to take photos! and woot! for the reading. I'd say you're in for a treat with both Dutch House AND Fever in your pile :-)

I love Rusty's photos! Wrong side and right! Well done!

I just picked of a curious stack of books from the library - that included Shade: A Tale of Two Presidents by Pete Souza... winter reading is the best!

That Rusty is so thorough! Thanks for showing us both sides!
P.S. Thanks also for the Australia animal clarification. Good to know!

Well I'll say, that Rusty gets the award for husband of the year. That looks like a great shawl. I am off to look up Crazy Brave. I just read a little book of Harjo's earlier poetry: The Woman Who Fell from the Sky. It was wonderful.

Well done Rusty!! I like seeing both sides of the shawl (and in two different settings). I still need/want to make this shawl (of course, so many other things on the list as well). Your reading is off to a fabulous start for 2020!

Excellent Rusty! Love what you're making there Vicki! And also thank-you for the Aussie update. (And Junah...6!!!)

I had to literally LOL the wrong side photos-- totally what Dave would do. You'd think all these years of proximity to knitting would lead to different results !
Fever and The Dutch House are both on my to read lists. (I should say to-listen-to)

There has been a request from the Wollongong Modern Quilt Guild for tree blocks to be put into quilts for those who have lost everything. The particulars are available on their Facebook or Instagram accounts. If someone wants to send some sewing encouragement to a certain country where their daughter is living.