I'm joining Kat & the Unravelers today to share what I'm knitting and reading... and doing. And there's big news! As usual, I've buried the lead, so see if you can find it. Heh. 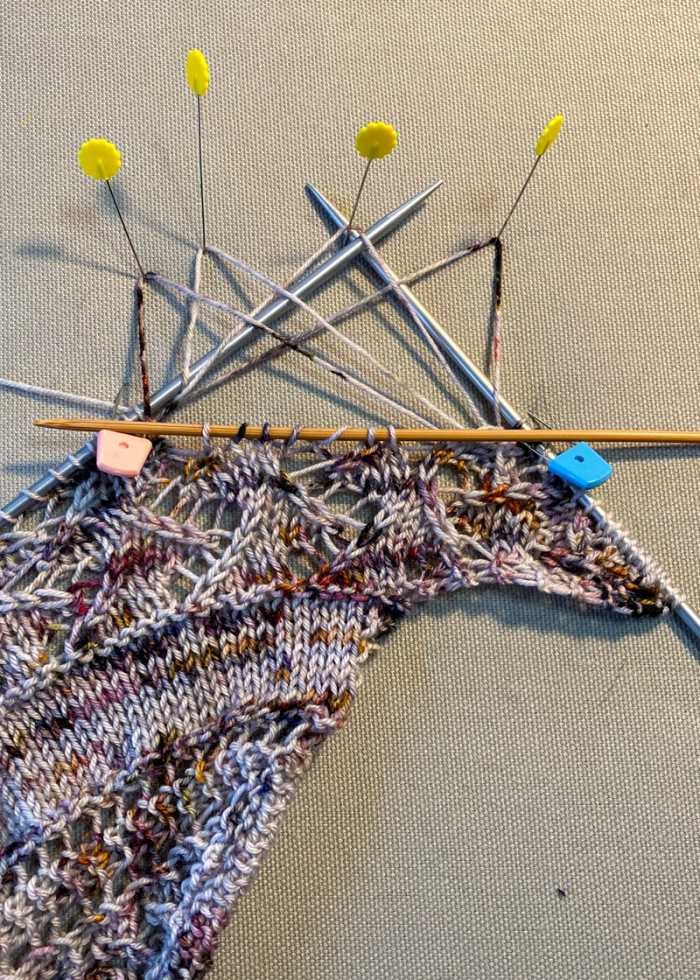 I was so close to finishing the first of two repeats of this section and dropped a couple of stitches. Perhaps I'd have had better luck fixing it if it was one of those patterns where you just "purled back" on the WS row, but stitches are manipulated on both sides and there are increases besides. 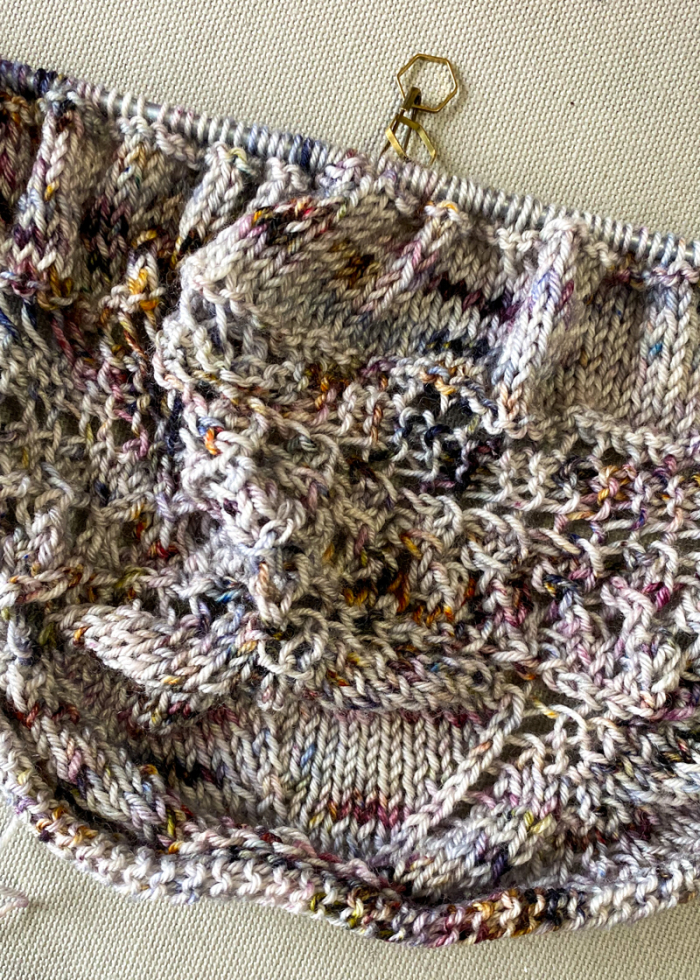 I must have slightly more than zero patience, having even attempted to fix it, but that's it. While Annie & I had a video chat the other day, I ripped back to a certain point and re-wound the yarn. I'll be getting back to that shortly.

In other knitting news, I've bound off my Nightshift shawl and wove in all the ends. 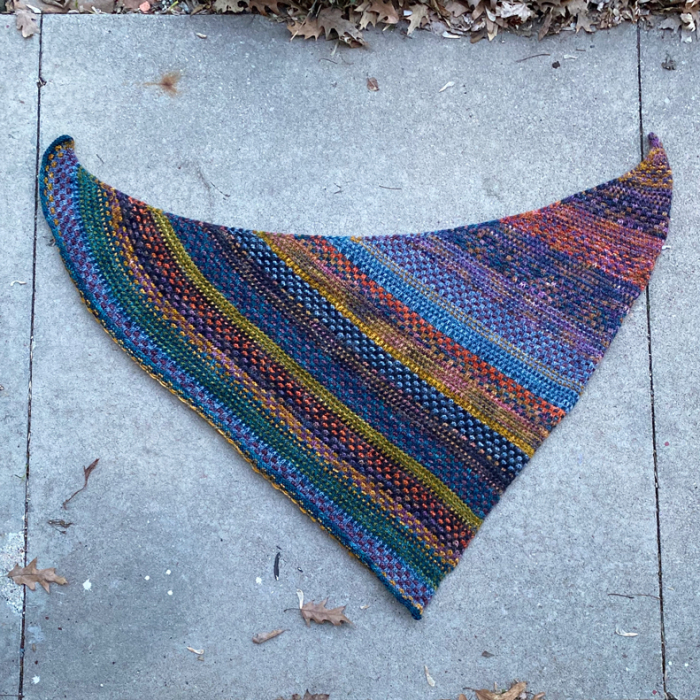 I meant to give that a soak today, but didn't quite get around to it. I'm not crazy about the width-to-depth ratio and hope that it will improve a bit with the wash. I am absolutely in love with the concept/stitch patterning and the yarn/colors, though. It's simply stunning in person.

Also in the realm of knitting, I'm thinking of knitting a blanket. I've been thinking about it for a while now, and originally thought that perhaps I'd knit another bigger Parcheesi (I've always wanted to), but then I saw the Safe at Home Blanket by Margaret Holzmann, and I think that's going to be the one. I think that it'll be the perfect thing to wrap a new grandchild in come September... all kinds of things will be knit into that!

It's Ali who is expecting. She sent a video of the kids a while back where they announced that they're having a new sibling... or "swibbelling," as Ginny put it. 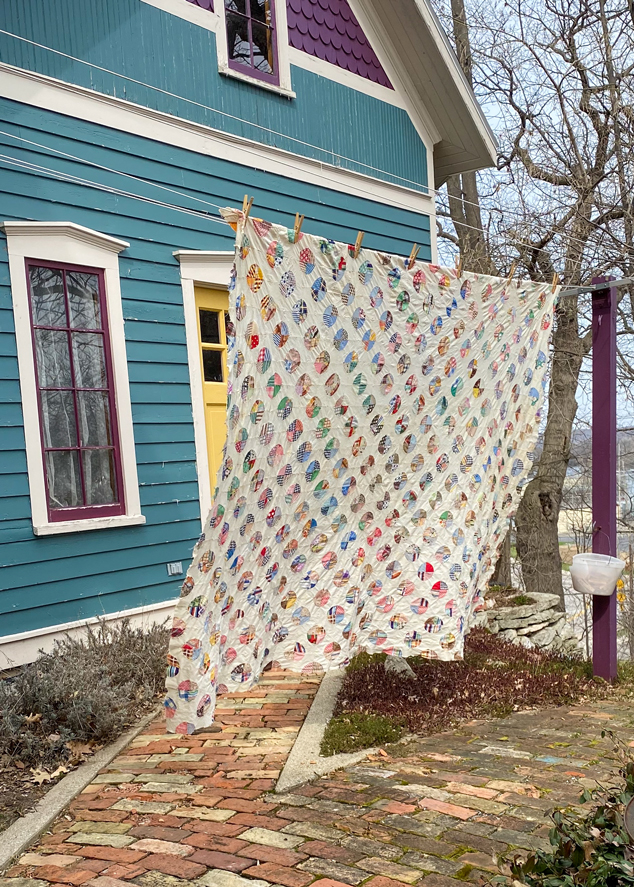 I had thought that perhaps I'd finish this quilt for the baby... and who knows what'll happen between now & September... maybe I'll have a CHOICE! I laundered it last week and hung it on the line for a second so I could take a photo.

I have an IG friend in São Paulo who wanted to see some close-ups, so I obliged with 10 -- if you'd like to take a look. I am looking forward to giving this a good press and determining whether the fabric I have in mind for backing will actually "go." If not, I'll have to go shopping!

I've been working on my Alabama Chanin Car Jacket. 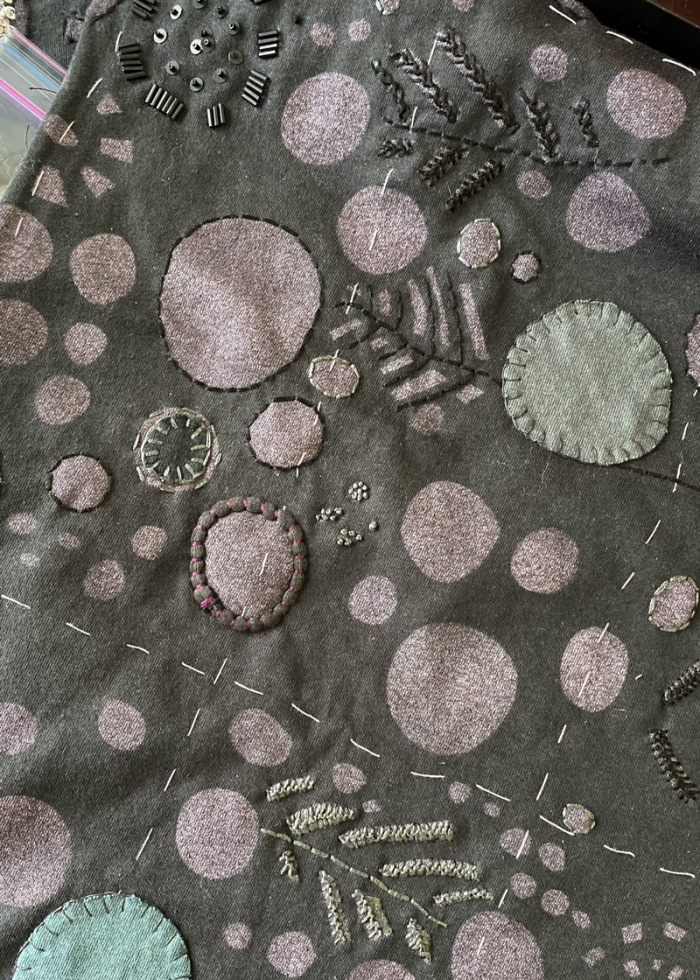 It's taking a while to get my mojo going... but I'm plugging away.

As in I actually did some today. 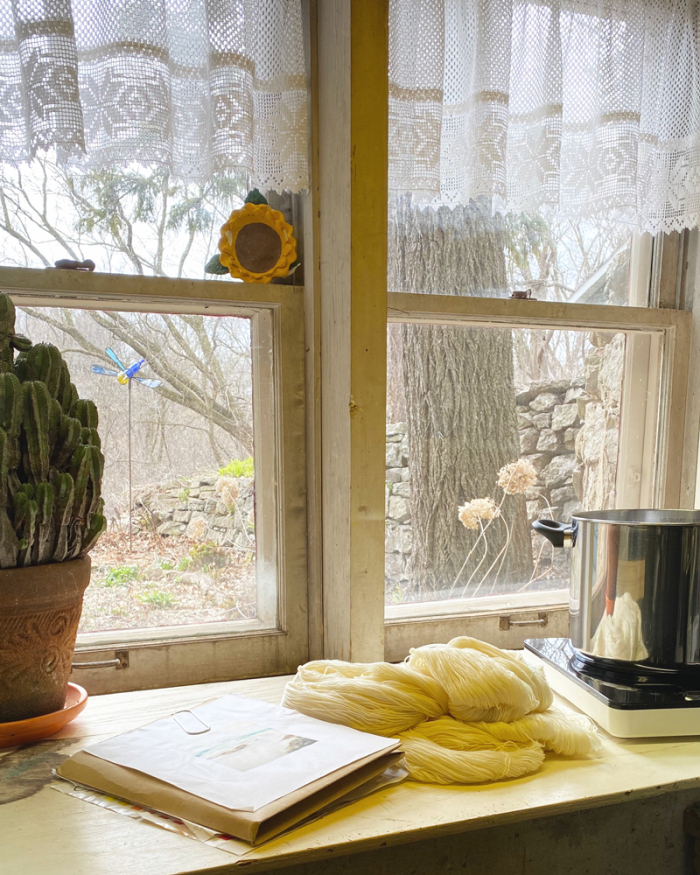 I'm trying to match -- or come close -- to some yarn that I dyed a while back, at the request of a customer. We'll see. (I'm a terrible note-taker and record-keeper.) It felt good to get down there and clean things up a bit, though!

Oh so much good news in here (outside the damned ripping back, that is! I feel your pain, but the second time was much better than the first!)

I have a quilt top that I bought some years ago, hmmm... that might be a great thing to get out, wash and see what I can do with it! You are all kinds of inspiring, Vicki! XO

Oh my goodness. I'm most excited about another swibling!!!! And your Nightshift is drop-dead gorgeous!!!

Oh Vicki - I am verklempt about a NEW BABY!!!! what wonderful news!! also wonderful that you're dyeing again ... I'd love to snag another skein or two when you're ready.

You've been busy creating all kinds of beauty. How fun to have a new little person to create a blanket for, whatever method you choose. (I would have totally voted to revisit Parcheesi, not that my vote counts.)

In a time that is short on good news, this is the best! I'm so happy for all of you for the new swibbelling. It's funny, when I was watching Junah's and Gin's cooking shows, I was struck by Ali's patience and calm demeanor, and I thought she would be a wonderful mother to more children. Congratulations and I hope Ali is feeling good.
P.S. Your knitting, stitching, and quilt top are pretty darn nice, too!

Congratulations on that new baby. There is nothing quite like the time of waiting for a new grandchild or when they arrive too!! The quilt top is so pretty and cheerful. Thanks for all your good news.

Your Nightshift is gorgeous.

I also wasn't totally delighted with mine with the width/depth ratio. I was trying to figure out what it was about the gauge that went wrong to make that happen. However, all this Sheltering at Home has made my brain totally unwilling to do math or even think about it, so there you are.

Congratulations on gaining someone new to knit for.

Congratulations on the new grand baby! Such exciting news in these dismal days.

Mazel tov on the wonderful news of the new grandbaby! That is the best news -- even better in these times!

Love your Nightshift. Those colors are so happy and cheering.

Oh, how did I miss this post yesterday!!!! Another swibelling!!!! What BIG AND WONDERFUL NEWS! Congratulations all around. XO

I knew when you said you'd buried the lead that another baby was on the way! Hurrah! I love your NightShift and really need to start putting more time in with mine. Go you on that lace knitting fix, I wouldn't have the first clue how to fix that without tinking back each row.

Your house is going to be full of SO much joy and kid-iness! How wonderful for Ali and for YOU! You were brave to even attempt a fix of THAT lace. At least you had a good spot to rip back to and restart. After a week I am about where you were. I hope to finish clue 2 today. The reason I didn't get on the NightShift band wagon was that ratio problem. It just didn't look like a wrap in the original photo. I LOVE the idea of your Safe At Home Blanket!