I almost let Macro May slide by this year, being out of sorts and all that, but decided to jump in again and I'm so glad I did. So, here's a little Eye Candy for your Friday. 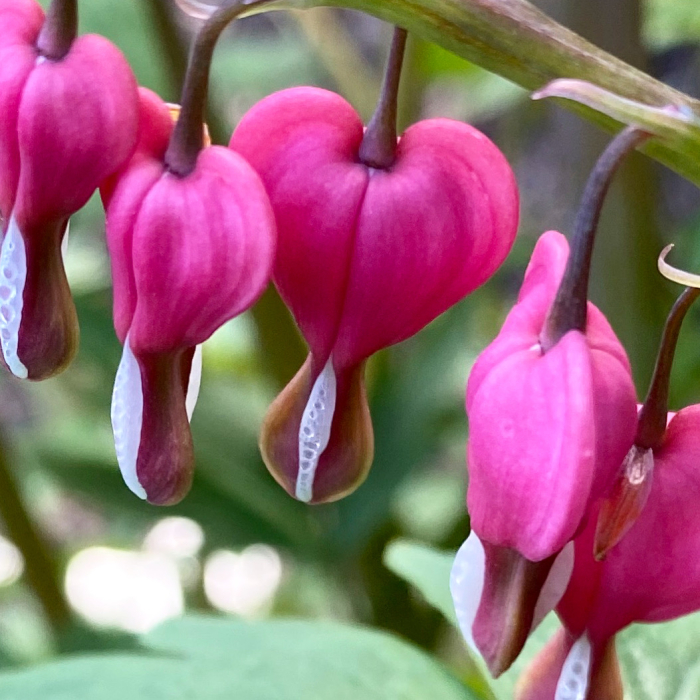 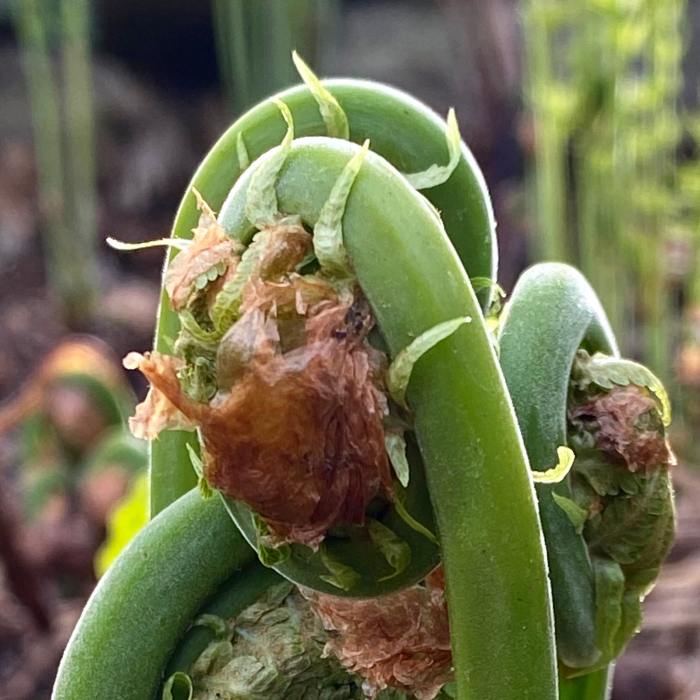 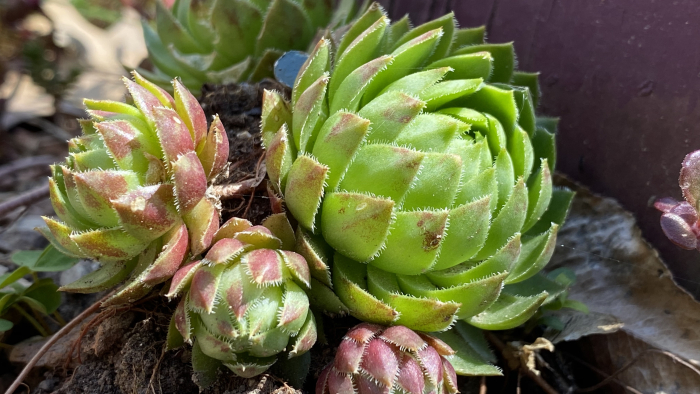 Bleeding hearts. Fiddlehead ferns. Hens & chicks. All from my own back yard!

I've begun knitting the skies on my Safe At Home audition:

And there's a shot of the back. I meant to try a mitered sky between the 2nd & 3rd house, but forgot. Heh. It's a quick little seam to sew up, at least (and I can "use an end").

I mentioned in reply to a few people yesterday that I ran across a knitter who was using this house motif AS A BORDER on more of a patchwork-knit blanket, which I think is brilliant! I wasn't enamored with either the patchwork pattern or the colors she was using, but I could easily jazz that up and make it my own -- my brain is thinking along the lines of a Safe-at-Home+Albers-y+Parcheesi-ish mash-up -- stripey, colorful, fun, and mostly square! I was sharing this idea during a chat with Cara & Ann and Cara suggested/we riffed on random houses, "their" house, "my" house, "meaningful" houses, paths to connect them. Oh boy oh boy oh boy... some of that might be a path too far, but who knows?! I might actually plan this thing... and I think I'll be winding & organizing yarn this weekend.

P.S. This is SUCH a great use for my Briar Rose Fibers leftovers from Nightshift! Still planning on making a pillow with this.

MORE HOUSE STUFF (which turned into a bit of a story!)

Rusty & I have been dreaming/doing "house stuff" since we met.

He was in the process of finishing the house at Cape Kiwanda when we met, and sometimes I'd help; other times, I'd sit and knit and watch. Eventually we added on (I dug the trench for footings!), and we even got married in that house.

We'd rented a house "in town" (Tillamook) together for a while before we officially "moved in together," and did a lot of work there (it was pretty awful).

Not long after we were married (and our family was growing), we bought a house up the coast at Cape Meares, and did a lot of work in that house, too, including rebuilding a huge deck, adding a sun room and patio, and a re-do of the kitchen -- which I never fully enjoyed because, by then, we were moving to Wisconsin.

We rented a house in Appleton and left our mark there, when Rusty rebuilt the back steps.

Finally, in 1987, we bought our current house, where, as you might imagine, we've done a.lot.

Back in the '80s, when Rusty built the house at Cape Kiwanda, he frequented a place called "The Other Lumber Company." It sold used lumber and stuff -- before it got classy and started to be called "architectural salvage"! The windows, doors, greenhouse panels, etc., he used in that house had all been previously owned. This was something I totally got into, having always had a thing for "fixer-uppers" and antiques.

So, backing up to somewhere between our meeting/renting/finishing/getting married, we would occasionally take a trip to Portland and end up at places like Hippo Hardware and antique shops. We bought a few things that we needed & intended to use right away, but we also bought things that we just plain fell in love with and had to have, thinking... we'll find a place for it! We bought a pair of stained & leaded glass doors from Denmark in that manner, which we never did find a use for and sold 15-20 years later at my mother's antique shop. Her shop had an entire floor rented to a fledgling architectural salvage outfit -- Urban Evolutions -- which is still in business today, having grown and changed quite a bit since then -- and, incidentally, where we bought the huge "science room" cabinet for our kitchen that had been salvaged from a local high school.

Anyway, the very first thing we ever bought together in the "we will use it someday" vein -- before we were even married, so a commitment, if you will -- was a leaded/pressed glass window. We never did find a use for it, but we could never bring ourselves to get rid of it, either... it was meaningful! So it's been stored in the basement for all these years... recipient of loving, reminiscent glances from time to time.

Kate calls it "the marriage window."

Though we've not bitten off any big new projects in recent years, we still do plenty of dreaming. A few years ago, there were some sketches done with the idea of adding a second bathroom in the laundry room, but that never really went anywhere. Last year, Kate had an idea to add a "funky addition" to the porch... which was super cool in theory and on paper, but maybe next to impossible to actually execute. Recently, she & Rusty brainstormed an idea to make that funky addition an actual addition to the garden room -- pushing it out to and reclaiming a mostly-unused corner of the back porch. They approached me with the idea as if they had something to sell, but I was on board right away, and the brainstorming continued... re-work (again) the old porch windows, use the extra windows (salvaged, of course) from the garage project, should we add a door out to the porch...??

I won't bore you with the entire jagged thought process, but eventually *** LIGHTBULB MOMENT *** the "marriage window" finally found its place! 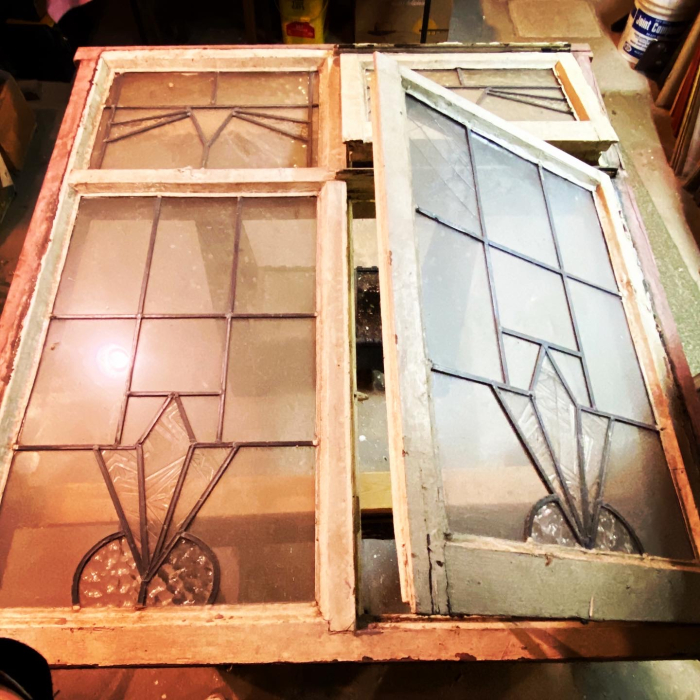 It's dirty and heavy (I've helped Rusty flip it a few times already) and needs some TLC, but it's so damn cool and I'm so freakin' excited that it has found a place -- that it will finally be part of our home...

That's a terrible photo, and I'd certainly have taken a better one had I realized that this post was going to take a turn! There will be plenty of opportunity in the weeks ahead... Rusty is making the first intentional trip to the lumber yard today for 2x4s. Stay tuned!

I love the super-size bleeding hearts and alien ferns, along with expanded house plans (both in knitting and your actual house). And if 2x4s are being purchased then it's real!

Dang! Use of the "marriage window" is better than a re-comittment ceremony at this point. And I'm so glad you reposted those plant photos here. Looking at them on my big monitor I can see so much more fabulous detail than scrolling IG on my phone.

Meanwhile, I await the blanket/neighborhood developments in yarn.

OMG - so much to LOVE about this post. OK, bleeding hearts (we've never had luck with them, so envious). Fiddleheads - my parents used to go in search of them and bring them home for dinner. I wasn't a huge fan then, not sure I would be now...but recently Colin & Mailing found some in a park and (I think) harvested them!

The house blanket: LOVE the idea of using them as borders and then...paths? Brilliant. You are just so freakin creative.

And the Marriage Window is GORGEOUS. How fun that you will be using it and, as Bonny says, if Rusty is going out to get 2x4's, it's real!! Can't wait to see how it all turns out.

Wow, that leaded glass is stunning! (I have an old window from a church that I should get out and "do" something with it!) And, your photos are gorgeous! The fringes on the hen and chicks! So cute!! :) Happy Weekend.

Your macro shots are always so wonderful, I love the colors of the bleeding hearts and the ferns are downright creepy (in a totally cool way) with those tendrils wrapping around! I love your stories of all the houses you've lived in and made your mark on and it's amazing that the marriage window, who has been waiting for her moment all these years, has finally found a place to shine!

I am a sucker for leaded/stained glass windows -- we had them in the house I grew up in. I'm so glad you've finally found a use for the Marriage Window. Clearly it was waiting for this moment to shine!

I love the flower pix-you must have a green thumb, your plants are so beautiful. Do ferns always look that scary while growing? I've only seen full grown plants. The marriage window is a stunner!! Where is it going to live?

The window is just FABULOUS. I LOVE it - and the story behind it - and I can't wait to see it "placed." I'm working on my little houses, too -- but your intarsia skills are much better than mine. (I need to keep practicing. . . and probably watching a few more YouTube videos.) I've been thinking of mixing up the houses with stripes or something. I love the whole notion of "neighborhoods" and "streets" and GRIDS!!!! :-) So much fun.