3TT: House & Home Edition
Little Pink Houses for You & Me

A do-over of this morning would be not unwelcome. Thankfully, I had a pretty good weekend upon which to reflect. 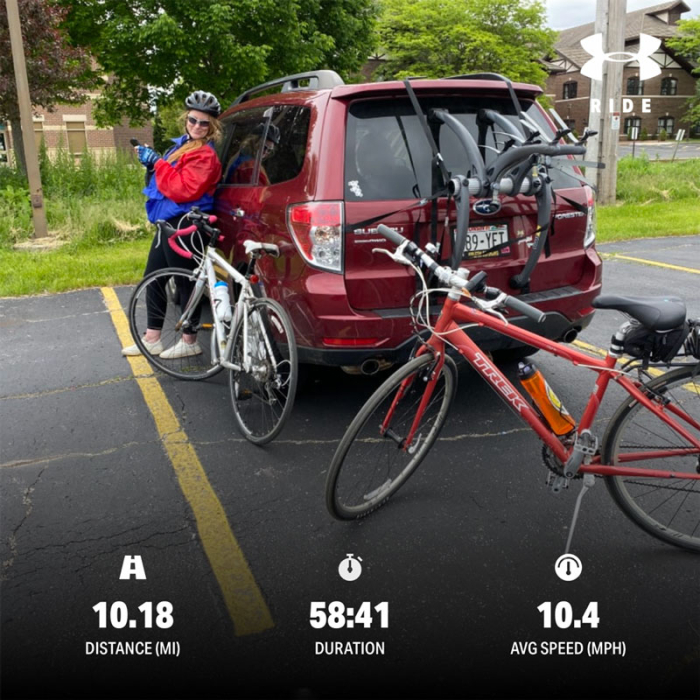 I've started riding my bike again! Kate's doing much more (her schedule is a bit more flexible and conducive), but I've been going along when I can. I went for my first real ride in ages a week ago, riding just over 6 miles on a level paved nearby trail. It was nice, but there were a fair number of streets to cross, so a bit of starting & stopping. On Saturday, we took to the road, parking at Lost Dauphin Park* which is located a little east of home. It was a nice ride along the river in an area with lots of very nice homes (so a little bit of lollygagging). That ride was a little over 7.5 miles on mixed pavement with some tiny little hills. Rusty planned to join us on Sunday to check out the Fox River State Trail, and I almost didn't go because that "mixed pavement" on Saturday did a number on my shoulder... and I was really tempted by a couple of hours "home alone," but I went. And I'm glad I did. It's a wonderful trail and just what I needed after Saturday -- back in the saddle, but nice 'n easy, and my shoulder felt better afterwards! Those are my stats above. We stuck together for about the first half of the ride, then Rusty fell off behind and Kate zoomed off ahead. We'll definitely be doing that again, and checking out other parts of the trail, too. 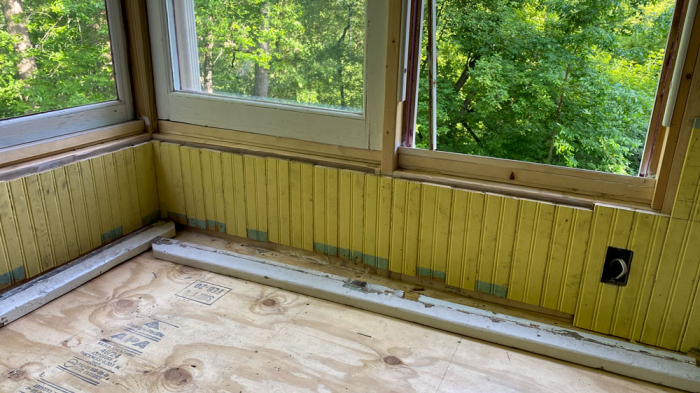 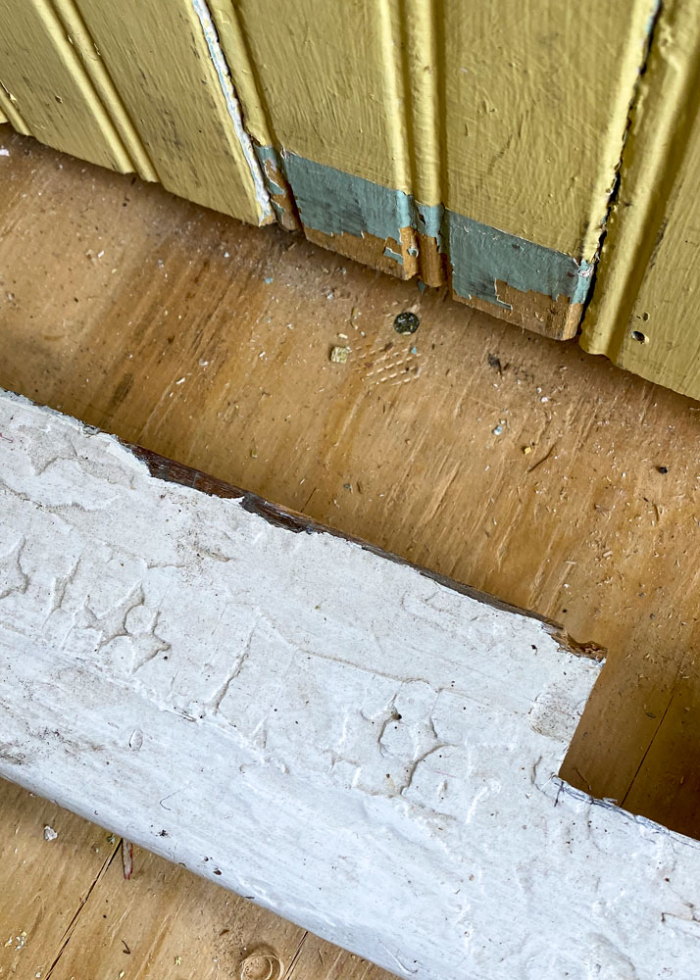 Rusty works on the Garden Room expansion for at least a few hours everyday. He's re-used some of the already re-used bead board under the windows -- you can see the turquoise-y green paint that had covered the ENTIRE WRAP-AROUND PORCH, back in the day, and everything in it! I'm super excited that he's also re-re-using the last remaining part of the original windowsill. It was shaped from one big board, and we just love the wabi sabi quality gained in over 100 years. 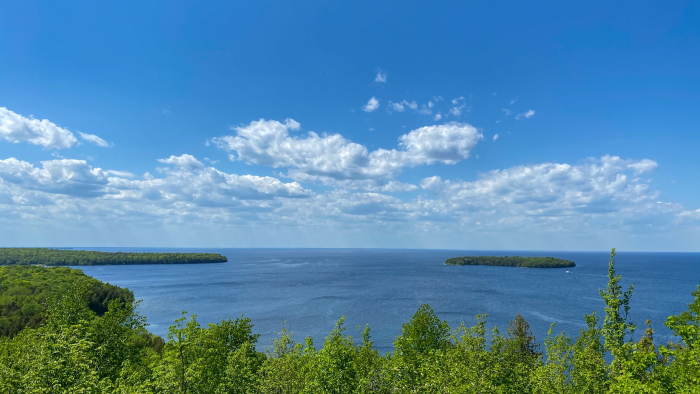 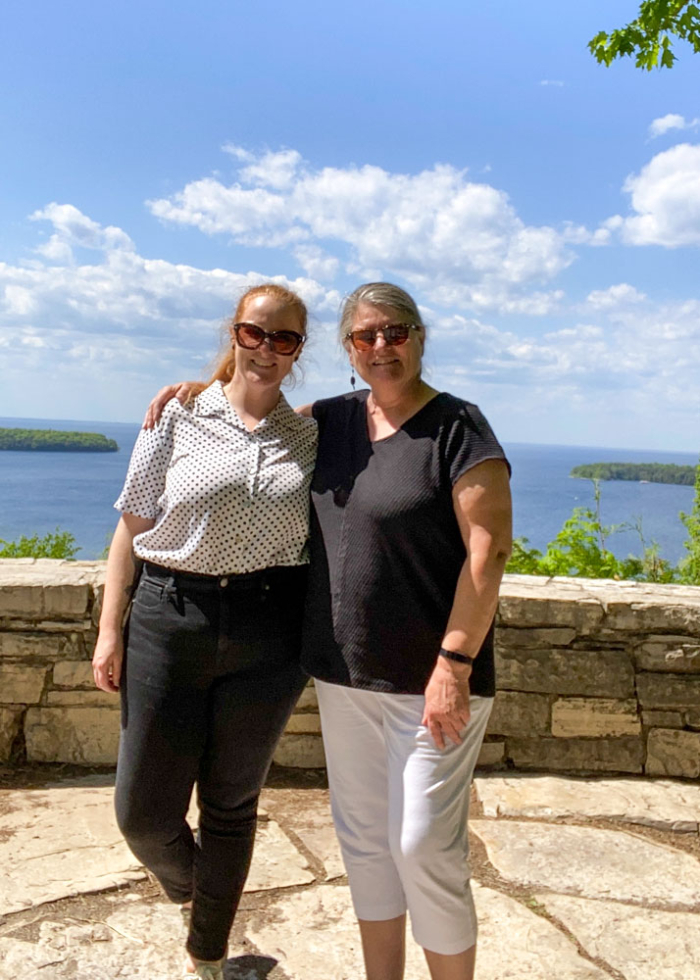 I neglected to share that Kate & I drove up to Door County last Wednesday. We missed peak cherry blossoms by a few days, but it was a gorgeous day! We spent a little time in Peninsula State Park, and found a handy "selfie station" at one of the overlooks -- the ledge was a little crooked, but it turned out cute, even if the sun wasn't doing us any favors. Ha! 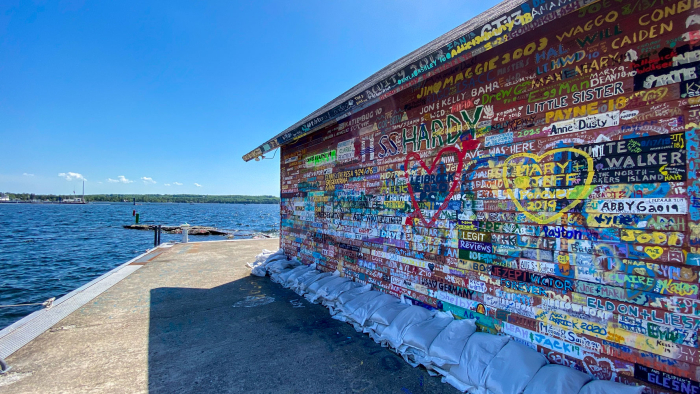 The water is super-high! This is an old fish house, more recently art gallery, but it's sand-bagged all around! 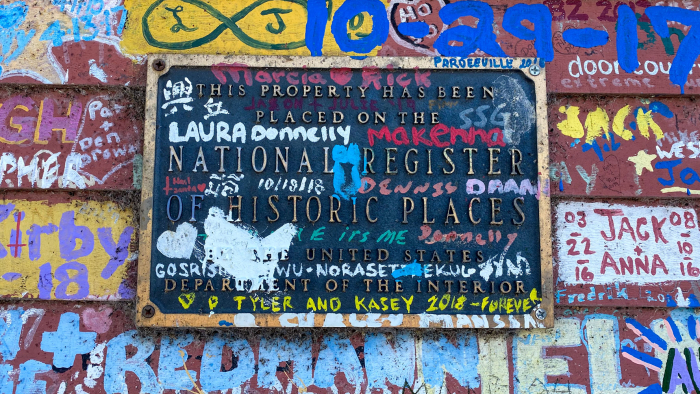 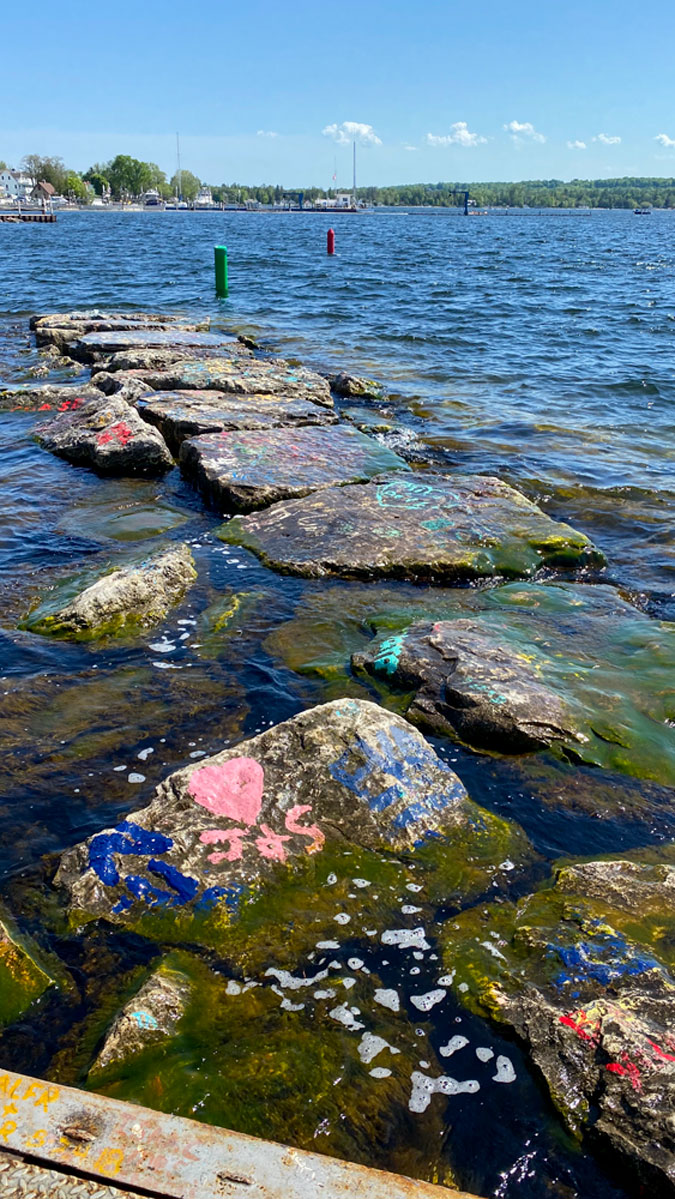 It's a very popular place to leave your mark, as you can see. And on EVERYTHING nearby, too. I love how colorful it is!

Speaking of color, here's how my first (bottom) row of Safe At Home is going. These were taken on Saturday, I guess, because I was mid-way through the last roof when I put it down last night. I've been using Stephen West's Weavin' Stephen technique to manage my ends, though I forget once in a while when I'm concentrating on something else.

I hope you had a good weekend, too!

The graffiti and your houses go together perfectly! And boy the porch expansion room is coming along beautifully. What color will you paint it when it's done?

I am loving your porch re-do as well! And go you on your outdoor trekking!

Such a colorful post! I love your garden room and Rusty's re-use of materials, the bright shades of graffiti, and your houses. Looking good!

LOVING everything . . . the bike riding and the lake and the garden room expansion and the colorful (but sadly sandbagged) building and YOUR houses, especially! I adore what you're doing color-wise and window-wise. Such a charming little pattern! :-)
(That wabi-sabi windowsill, though? Ohmygod I love it so!)

Looks like it was a lovely weekend! I love how the project is including so many remnants of the past -- it's going to have such amazing character when it's done!

I enjoyed your post today. I was a hospice social worker and often took a break or did my charting while sitting in the parking lot at Lost Dauphin Park. Thanks for the link to its history. That is a lovely spot. We used to live in Door County, before moving to the Appleton area. Now living near Milwaukee, your posts often make me feel nostalgic for other places we’ve lived.

Such a bright colorful happy post here Vicki! That new porch area is going to be so great. Glad you had a wonderful weekend and I love the blanket!!!

So many good/wonderful things in this post Vicki. I'm envious of your bike riding. I've been wanting to do that and Fletch brought up my bike from the basement, cleaned it, inflated tires, lubed it, etc. BUT...I have NO upper body strength and cannot lift it into our out of my car. And same if I use a bike rack - just can't lift it. Sucks to be such a weakling!

But on to good stuff. Your porch remodel is so cool. Love the re-use of so many things and I'm excited to see the end product.

Your house blanket is a work of art (and patience - I would not like the weaving of ALL those ends). So colorful and fun. And the fishing shack is great! What a cool, cool place.