Doing my best
Getting back into the groove

1 -- I stopped at The Office after work the other day to drop something off? pick something up? I don't remember! I did take a seat for a few minutes...

Kate was inserting goodies into the magazine, readying shipment of the premier issue of dovetail. I gotta say, it was nice just to sit for a while and watch someone else work! 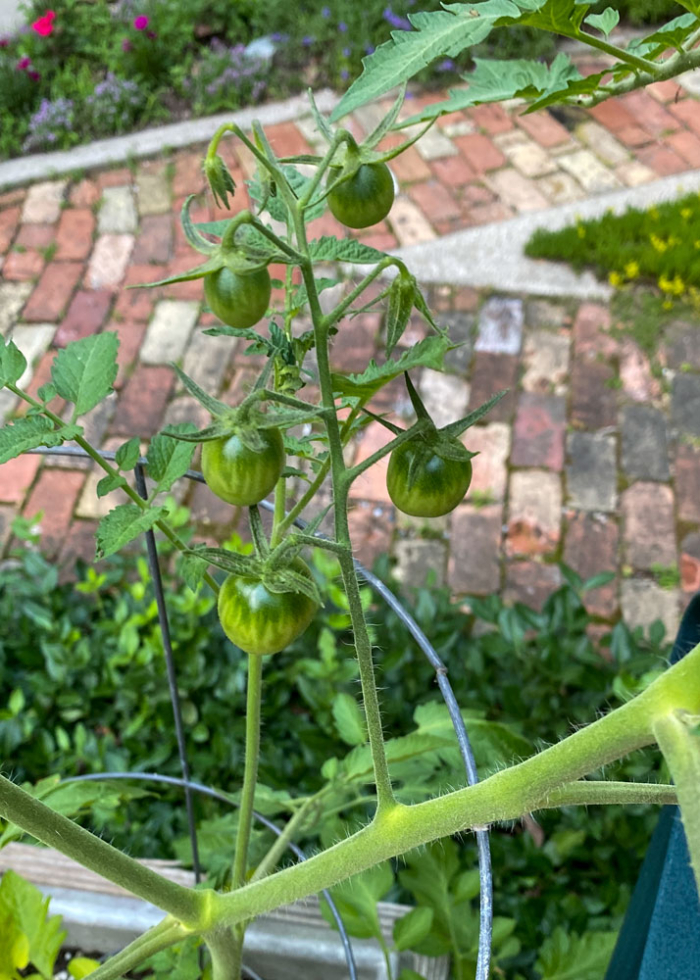 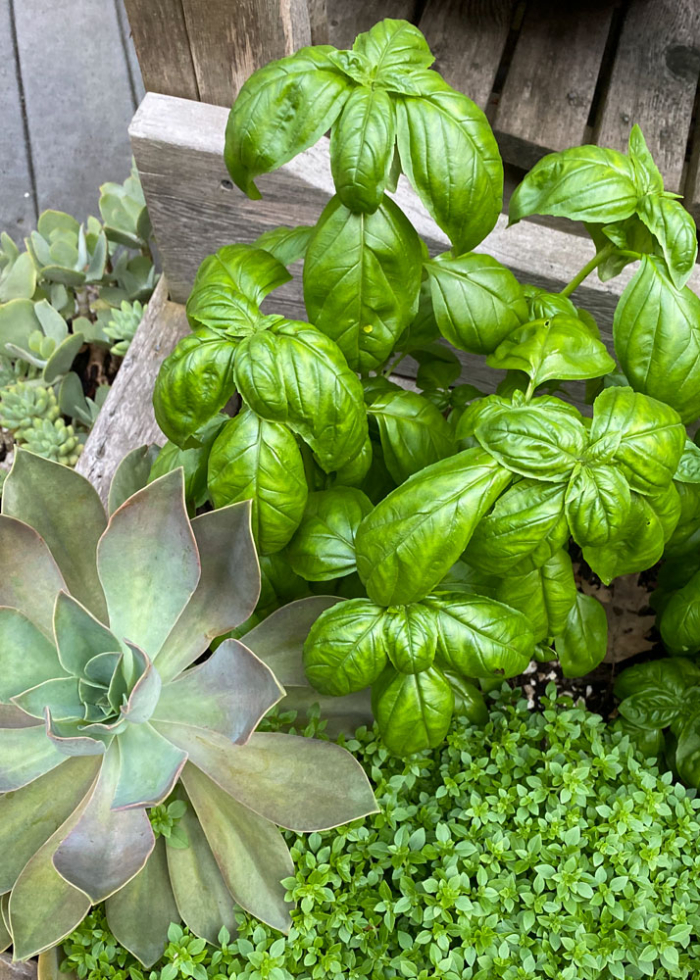 The tomatoes are all coming along. The basil is AMAZING!! (That photo-bombing succulent is also doing quite well.) 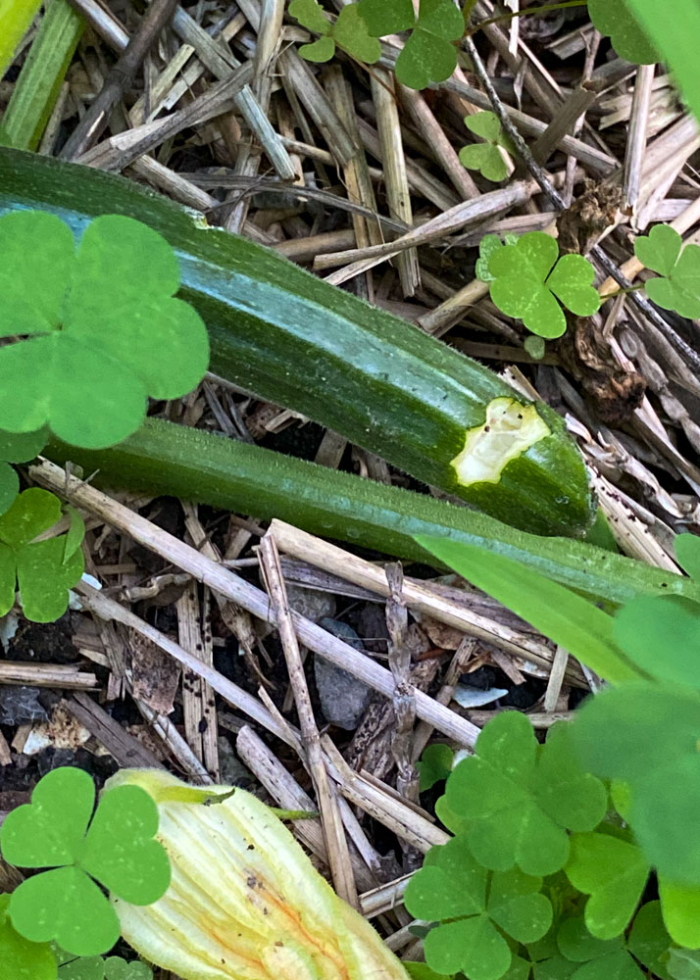 Something is nibbling at my zucchini! 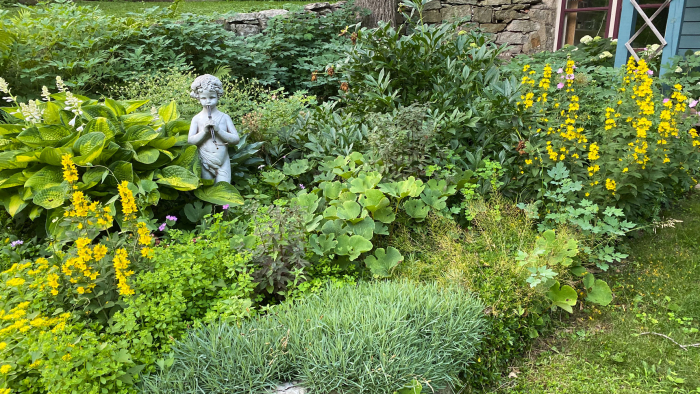 And this is the usual raucous jumble of things. 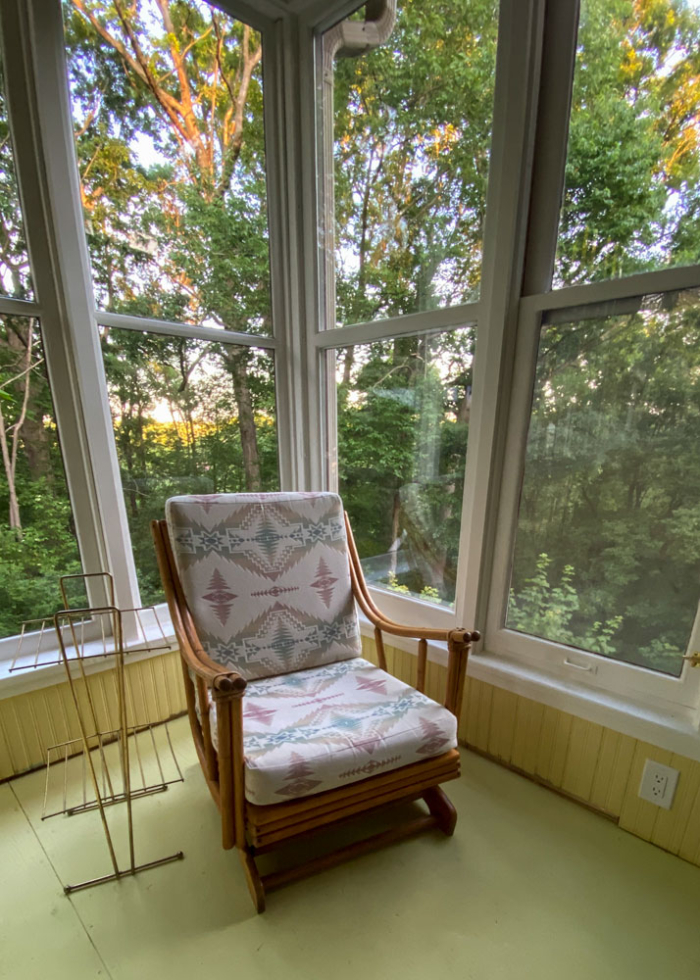 The platform rocker is out of the garage and in The Garden Room! There's a pretty good view of the lower yard/garden from there.

3 -- I'm getting the hang of crochet again! My rainbow box of yarn is only a hint... this is the bigger picture:

As Wisconsin began its Safer At Home order in March and I awaited my stimulus check, Madelinetosh threw up a post about a Prism Pack of Unicorn Tails and, well, I've always loved those unicorn tails and... I didn't even think twice before ordering. (Ugh, pandemic times!) If I was going to be "safer at home," I was going to be surrounded by things I loved... and colorful, too. Heh.

Well, I really can't be spontaneous and throw down money like that without some sort of plan, and they were making me feel so guilty just sitting there, so I sort of had to MAKE A PLAN! The Safe At Home baby blanket was & is perfect for the baby and already in the works by then, and I knew it would never be a "portable" project... not that I was going anywhere with my knitting, but y'know... And so many people were crocheting... so, yeah, CROCHET! That could work! And even though those are little skeins of yarn, they're going to go a ways, so maybe TWO projects, somewhat simultaneously, even...

Uh, yeah, why not THREE epic blanket projects at once?! (Ugh, pandemic times!)

So my plan is to make Bear's Rainbow Blanket and also Hexie Love Actually! << FYI: Those are Ravelry links, just so you know in case the new design is problematic for you, as it is for many. (I am not in love and wish it wasn't quite so stark. I like it on my phone, but find it a bit easier to take if I enlarge my desktop display, and I've tweaked settings to remove drop shadows, etc.)

So, anyway, back to crochet. As I said the other day, it is not like riding a bicycle for me! I'm getting my feet wet and re-learning with Hexie Love Actually! 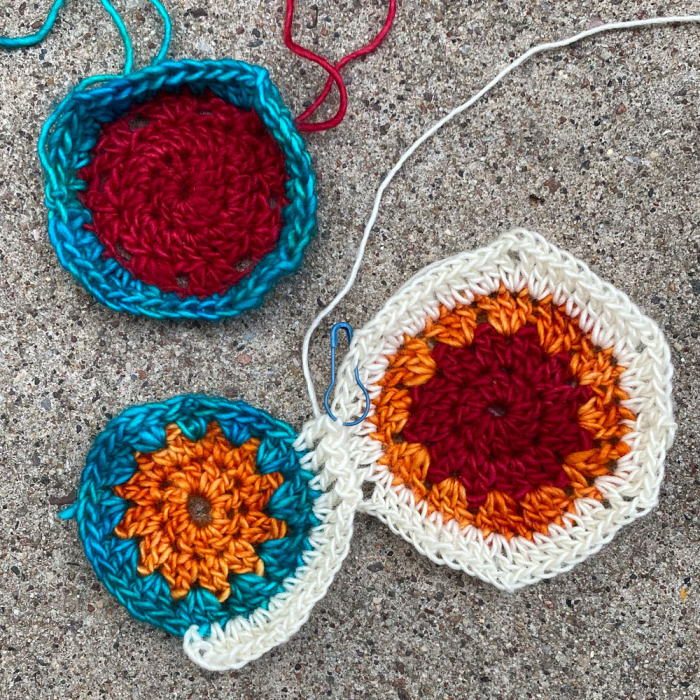 That red & blue blob was my first effort. I thought I was doing OK, but it was supposed to have six corners/sides, and instead turned out with only four. So, basically, a SQUARE (and not even a good one)! Turns out, I did a few things wrong, and my second effort (red & orange) turned out much better. With the orange & blue hexie, I'm trying the "join as you go" method and I'm not sure that's right but will figure it out. It's really fun, but once I get the hang of it I'm going to limit my crochet time until I get the blanket done. (Did I mention that I've started Row 3? I meant to take an update photo... maybe tomorrow.) 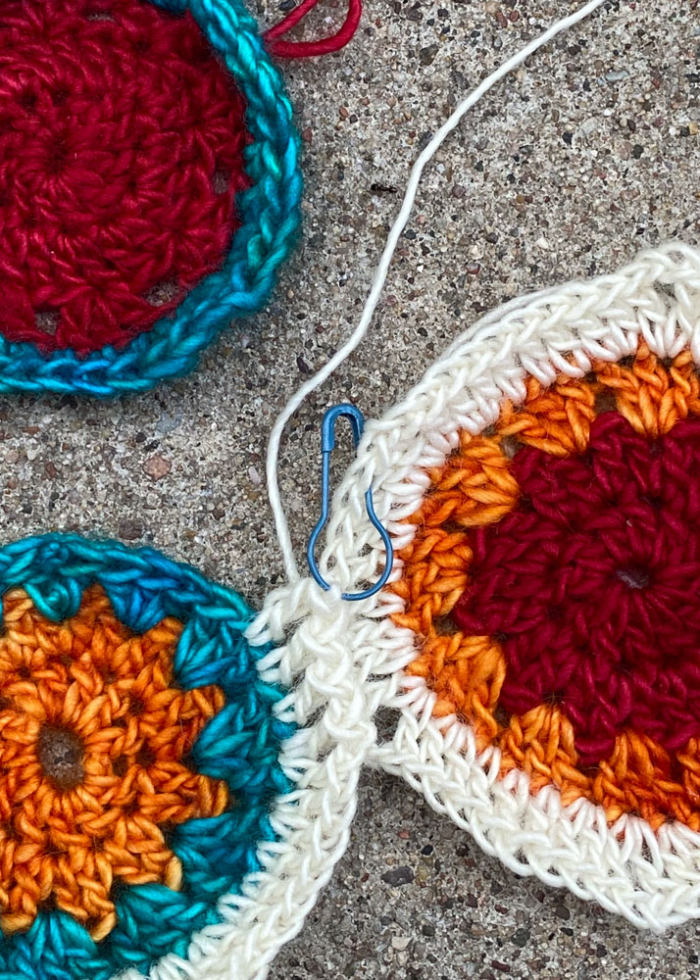 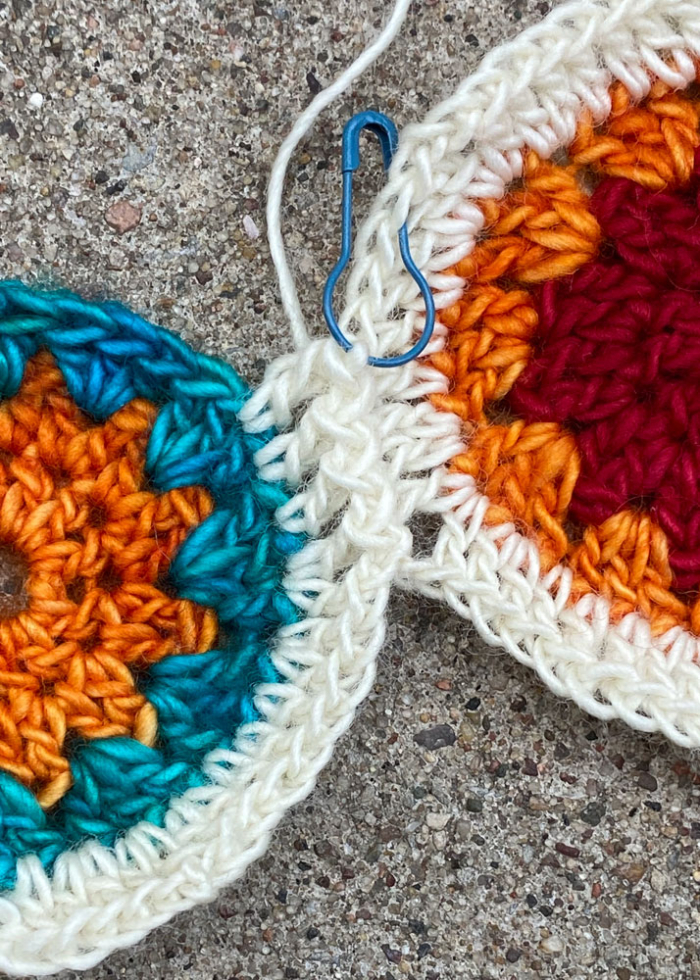 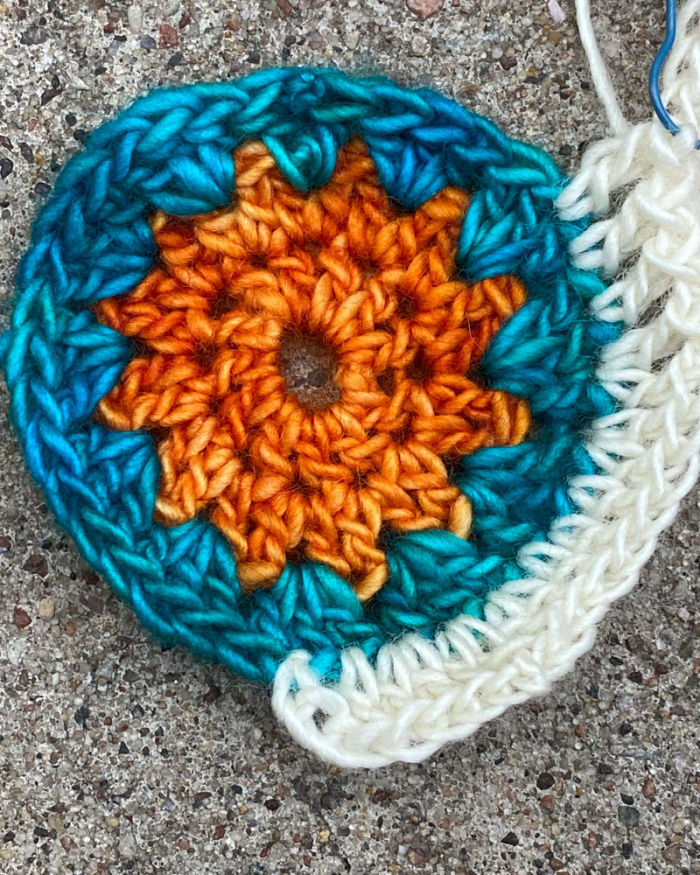 (It was a stellar morning for photographing yarn on the walkway outside the back door!)

Even for me, this feels a little crazy, but... pandemic times! I'm just going with it.

Ooooh, all those skeins in ALL those colors are gorgeous! I have trouble with crochet - I can't seem to figure out where to insert the hook when trying to make hexagons! Your garden is looking fantastic and the garden room, too.

I don't even know where to start with this post! Maybe from the top? Dovetail looks beautiful. I had no idea Kate was working on a magazine and it just sounds perfect. Your garden! It is ahead of ours - I think we have one tiny tomato on one plant (out of 4). (And deer munched our peppers AND tomatoes.)
I want to come and knit or crochet or just drink with you in your garden room! Another chair is needed - lol. Look at all those luscious colors of yarn. I can't believe you are thinking of 3 blankets!!! The hexigons look cool. As you know, I'm just making granny squares, but I really like the look of the hexies.

Kate looks so focused and your garden looks terrific! I love all the colors in the unicorn tails and the fact that you're crocheting away. I'm excited to see the lovely blankets this baby receives!

I'm so excited to hear about Kate's new venture. (She always has something exciting cooking!) And your garden looks FABULOUS. "Raucous jumble of things" is my favorite garden style. :-) And your garden room. Oh, I'm gonna hang out vicariously, okay? And I love to see all the projects exploding from your imagination. I'm kind of going through an All The Projects phase myself. Which is highly unusual. I blame the pandemic and accompanying frustration . . .

Have a great weekend, Vicki! XOXO

I bow down to you for splurging on something so beautiful with an actual plan for it! I am more likely to be seduced by pretty colors and buy but then be paralyzed by trying to figure out what to do with it.

What is your secret to getting your basil to be so lush and full? Every time I try to grow it, it gets skimpy and anemic-looking.

WOW! those are three (or maybe four?) GREAT things ... your new room looks so bright and inviting, and the basil (pesto did you say?), and the crochet. I love all the crochet interest and inspiration popping up in my feeds right now. Epic blankets are Shelter at Home projects for sure. I'll bet your sunroom could use a few for the winter, right?

A new magazine! How do we subscribe? Your garden is so relaxing and inviting, whoever is nibbling on your zucchini couldn't help themself. All that wandering among the plants made them hungry. The garden room picture made me take a deep breath and relax my shoulders. Thanks. While I find your unicorn tails gorgeous and inspiring I am not tempted to do a blanket with 41 colors. One secret to crochet is a bright light. Where you never (or almost never) have to look for your next stitch to knit you have to look for every stitch in crochet. Removable stitch markers in different colors will help with getting corners sharp and even have fun. Be safe. I'm hibernating here since the numbers keep going up. Doing Camp Loopy again this summer. Project #2 is on my needles.