3TT: Loose Interpretation
3TT: It's Not All Ducky All The Time

The new cushion foam arrived, tightly rolled & compacted into a box, which we then set free! It was recommended to unpack it within two weeks of receipt, and to let it fully re-expand over a few days. These are the cushions for the "sofa bed." 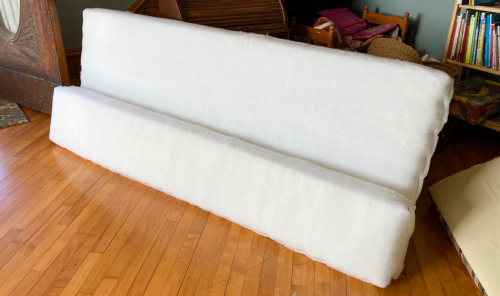 We have fabric for that part, so I set to work on Saturday... dismantling the old back cushion, first. 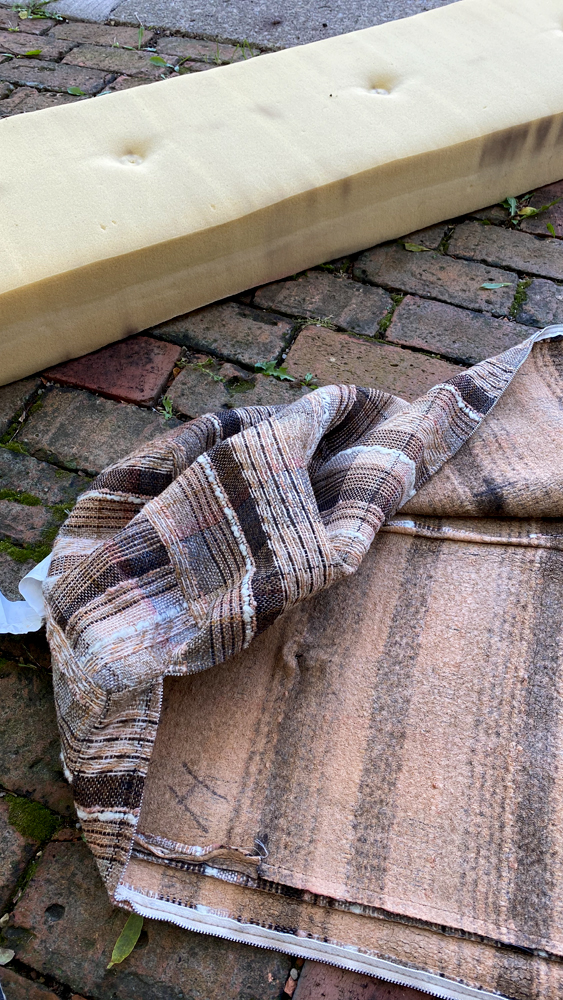 You can see how dirty that old foam is, and it was never wrapped in anything at all. I'm so glad we're doing this... even if I'm a bit out of my comfort zone.

I removed the zipper and decided that it really needed a wash, so I carefully secured the ends and threw it into the washing machine along with the other one I'd already removed. 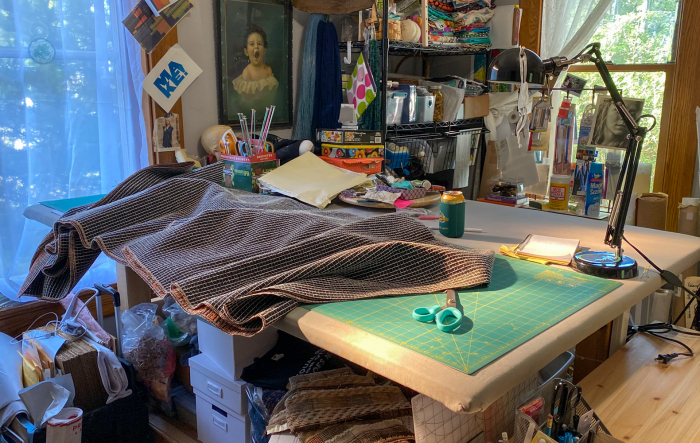 I cleaned off both my work table and sewing table better than they've been in months! These cushions are 75" on the long end, so I need ROOM! 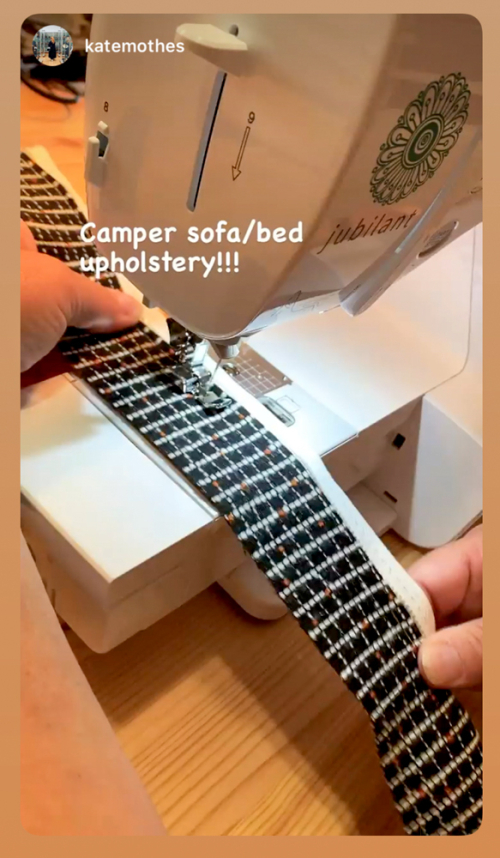 It was pretty genius to buy fabric with a built-in grid along which to measure, cut, and sew -- everything's so straight! I've reached a pretty futzy part and decided to stew on it for a little bit... watch a video or two before I dive back in.

It was a "payroll weekend" for the coffee shop, and I told Ali that I'd drive out and pick up the checkbook. It was a gorgeous day yesterday with nothing much planned, so Kate came along and we grabbed the kids to give Ali a little break. We took them to Lower Cato Falls, a park that we visited in early April when we needed to get out of the house. The water was a bit lazier than in spring. Junah & Ginny led us through the woods, following a trail (for the most part), though I'm pretty sure we forged at least part of the trail back! 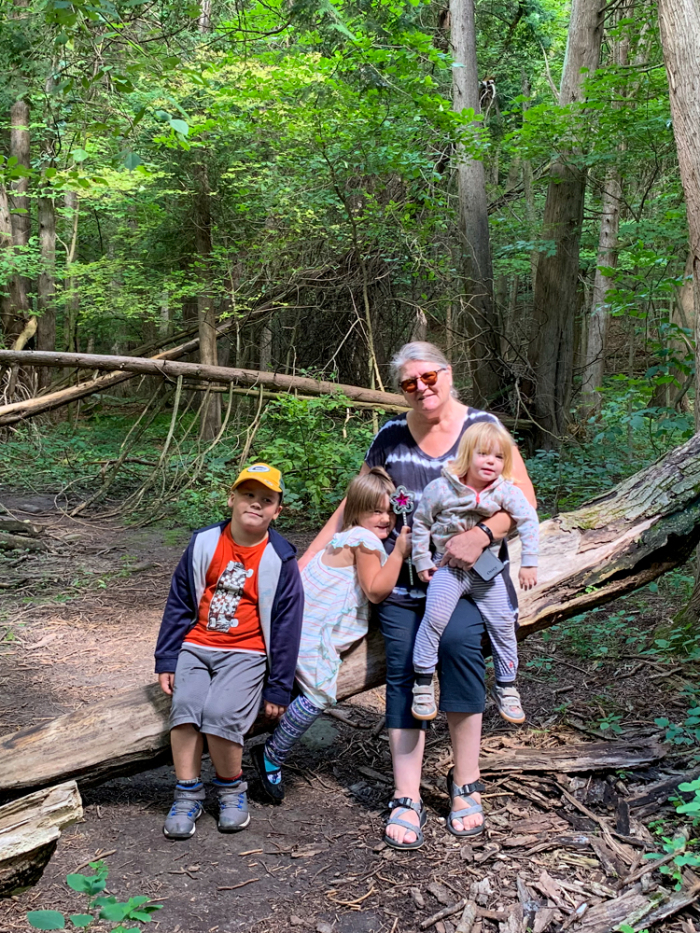 It's not the easiest path, full of roots & rocks, steep in places, but the kids did great... and they were so encouraging! "You can do it!" "C'mon, Nona!" "C'mon, Kate!" Even little Malina, in her tiny voice... so cute! When she fell or tripped, she'd get up and say, "I'm OK!" Anyway, they played for a while on the ancient playground equipment and we had a little snack (I actually thought ahead) before returning them home.

It was a pretty great weekend... hoping it was the same for you!

Love your re-use and redo (and the fact that you have a Jubilant sewing machine)! I can hardly believe you and the kids hiked by a creek and nobody looks wet. (My kids could barely last 10 minutes before somebody was soaked.)

I'm so impressed at your skill at making new covers for those cushions! I'd be way to intimidated to try it. Jackie always says I'm OK when he falls, too. It's adorable.

I'll add my admiration and appreciation for your re-use of zippers, etc. Your project reminds me of when I volunteered to make new slip covers for the couch used by the after-school program at my son's middle school (many, many years ago). They chose a mid-weight denim fabric, and I prayed that my measurements of the cushions were correct. I was so surprised at how well they turned out, but then anything would have been an improvement over an old couch used by young teens.

Love your fabric choice for the new cushions. Fabulous. But gosh you are brave to tackle that job. Your hike with the kids sounds great. They are just too darn cute - love the way they encouraged you and Kate on and little Malina with her "I'm Okay" is just adorable - she is growing up so fast (they all are!!).

I really like the fabric for the new cushions, and you were pretty smart to select something with a grid!

Those kiddos really have the right attitude when it comes to being tough and active outside. I'm afraid I've very much got an indoor kid. She starts complaining in the first minutes of any outdoor activity.

I'm so impressed with your upholstery reno ... what a difference new cushions will make inside Ducky :-)

Can't wait to see the "sofa bed" all done! good for you for re=using those zippers. I have done plenty of re-upholstering and using a wrap on the foam is a great idea. It saves the fabric and the foam. Love the pic of you and the kidlets in the "forest"!!

GRIDS! Love it! :-)
It sounds like an exciting weekend, Vicki. (Tiring, too.) And, like I already mentioned on IG, those kids! When did they grow so tall?????

That looks like a great weekend. You are such a great grandma!
And it was so good of you to reuse those zippers. I have not idea how to upholster, so I'm admiring your sewing.

I am in awe of your sewing expertise! Yikes, that is so impressive! (and holy cow are those kiddos getting big!)