It's a darn good weekend when I feel like I accomplished stuff and took a good nap. I might have been fighting something last week (likely the same low-grade depression that our former First Lady is suffering, and that most anyone reading these words is probably feeling these days), as I took 1.5-hour naps on both Wednesday and Saturday! I've also not been sleeping quite as well as I normally do. By mid-morning, both days, I was looking forward to obligations being met so I could just go take a nap. I barely moved a muscle on Saturday, could easily have rolled over and slept for at least another hour. (But I didn't.) 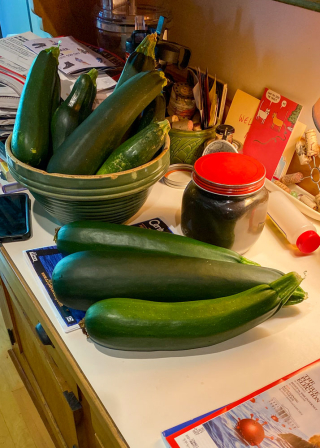 Meanwhile, Kate helped me turn some of this into four loaves of zucchini bread on Saturday morning. We worked on one and froze three. I made another four loaves on Sunday afternoon -- Kate took one camping, I gave Ali two, and there's one left for me -- and froze about 14 cups of shredded zucchini for future use. There's still zucchini coming in the garden... I had spotted that one in the middle from the bedroom window, two stories up, on Friday morning! The zucchini fairy might soon be making some calls. 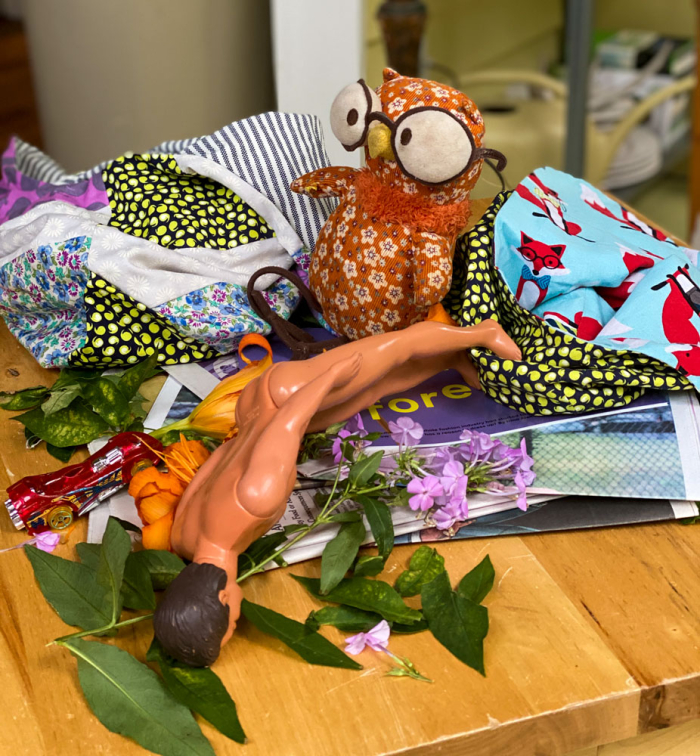 Ali & the kiddos came over yesterday for supper. I was sitting in the Garden Room and saw Junah & Ginny picking flowers down on the path. They ran up the stairs and into the house, each with a little fabric bag full of toys 'n things that all got dumped on the table. That photo just kind of sums up the randomness of everything right now, and that little owl is so darn cute! 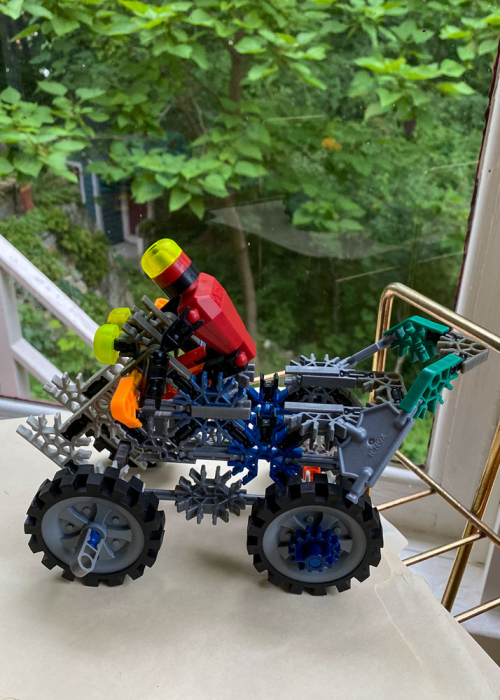 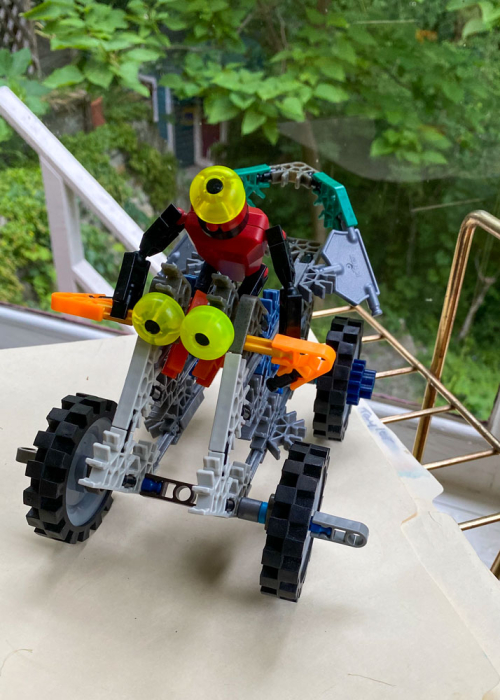 Jün got into the Knex and asked me to help him build an ATV. While I was trying to decipher some of the component builds and muttering about poor quality of the printed plans, he took a motor and started fooling around, making comments about his superior eyesight, eventually coming up with this:

Haha. The kiddos are all coming for a sleepover tomorrow night, and I know there will be plenty more of that! Plus dolls and coloring and stickers and who-knows-what-all!

I made a little progress on the blanket over the weekend. Only three more blocks left on Row 6! 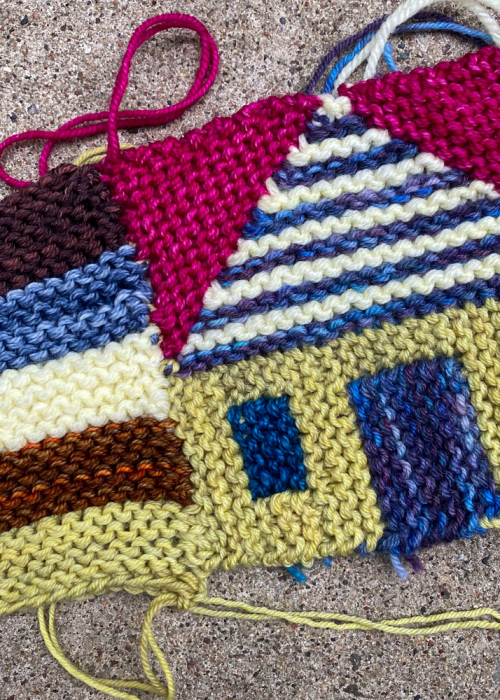 Some of the color & pattern combos make me so happy.

Another thing that makes me happy is getting a photo like this in my in-box: 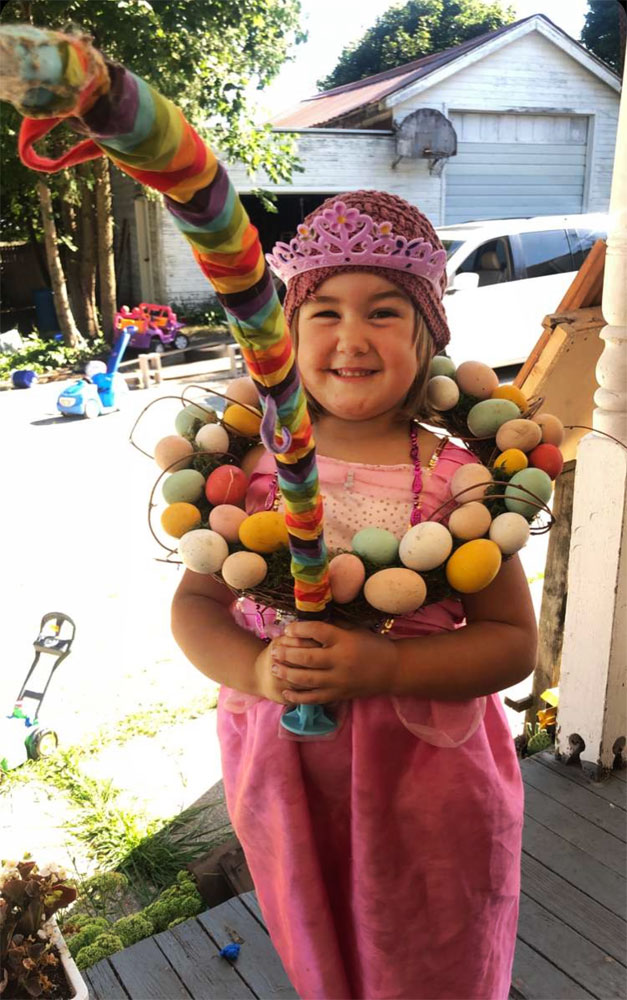 I'm going to guess that it'll make you happy, too. Who couldn't use a little dose of Ginny's particular brand of sunshine today... or any day?!! She's one of a kind (also singing these days like there's no tomorrow)!

Happy Monday, folks. I hope y'all had a great weekend.

I love your table, Knex, and that happy-making Ginny photo! I also love that gorgeous blue in the last house door and window. Hope you have a fun sleepover!

OH, that Ginny. She cracks me up, what a wonderful personality she has and she's so darn cute, too! I hear you on the low grade depression stuff. Man oh man, it's a hard time right now.

Who could not want some of Ginny's brand of sunshine?! I understand that low grade depression issue, but in mid-April I started taking a walk first thing (almost) every morning and have found that has really boosted my mood and energy. I'm not a particularly fast walker, but I go early enough I rarely need my mask up and I tend to be set for the day afterwards. Hope you find something that helps you too.

Oh Gin always makes me happy. And Jun with Kinex!!! I bet you have a FUN sleep over. All that zucchini - Fletch won't grow it as he "hates" it (yet loves yellow squash - I can't taste the difference). But, I do know it's easy to be overrun with it. I napped soundly this afternoon. I was in the office longer than I've been since early March and it exhausted me. I don't think I can ever go back to full time at the office!!

Those kiddos -- you can't help but to be happy seeing them!

If you need more ideas for zucchini, a friend on IG posted that she'd made this: https://smittenkitchen.com/2016/08/summer-squash-pizza/. I don't know if I can convince my picky kid to eat it, but I'm sure going to try!

Gin is truly the embodiment of JOY!! It is an aura around her and it is a wonder to see! Have fun this weekend! XO

Those kids could make anyone smile! They are entertaining and SO creative! I wonder where they get that from! LOL

Oh wow, you already know that it makes ME very Happy!!! What a kid to bring the sunshine. Yes I agree, I think we are all suffering a bit these days. Trying to stay Covid free and sane at the same time is a real haul. Happy to see that smile and the get up she has on!! so happy....:)

I know about those blahs or as I call it enui- Gin put a big smile on my face- I haven't seen Knex since my 30 yr. old twins were young. They would build like crazy.
Can you put a basket of zucchini in the coffee shop-free to a good home?

Thank you so much for sharing Ginny! She does add a blast of sunshine to any day. :-) When Brian was little, he LOVED K'nex. He spent hours and hours building -- both from kits and "free-style." Such a wonderful building toy (and slightly easier on the feet than Legos when you step on them in the night).
XO