That's crazy, isn't it? By this time next month, I'll already have held a new grandbaby at least a few times!

Since this photo was taken yesterday morning, the last house on the left is underway... walls are up, windows & door are in, just the roof and sky remain. 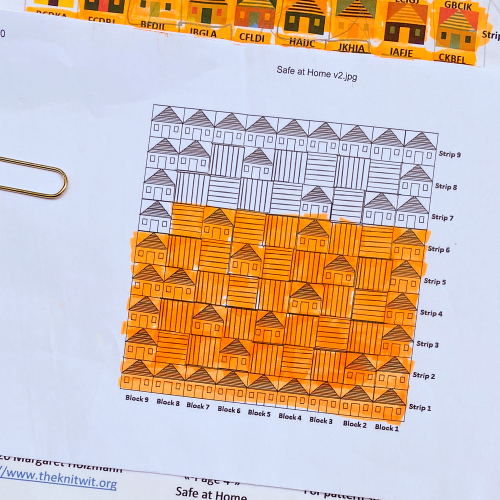 And that'll be the wrap of Row #6! Two more random rows to go and then that last row of houses -- I'm really looking forward to that! Oh, and then the sewing up and the border. I'm planning to do something a little different -- crazy, colorful & fitting -- with the border. Stay tuned! 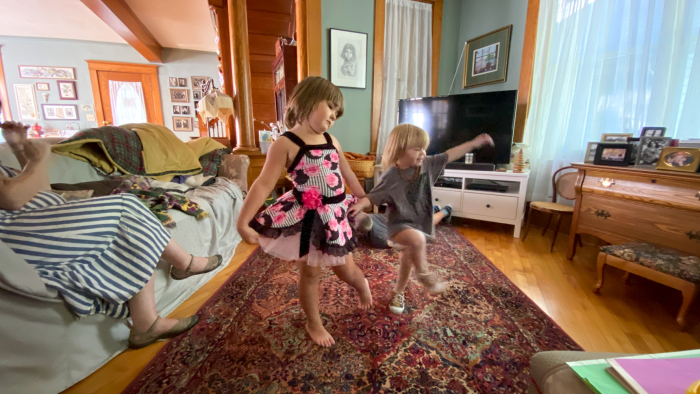 I had all three kids overnight on Tuesday. This is Wednesday when their mom came to pick them up. Ginny's doing a show (do you want me do do one dance or three?) wearing one of the dance costumes for the spring recital-that-never-was, and is obviously not happy about sharing the dance floor with her sister -- and her brother's sprawled on the floor behind, too. That's a family of singers & dancers!

We had a great time! I picked them up and we swung through a drive-up window to pick up supper, played a bit, then watched a movie. I kept my Disney+ subscription because I knew they'd love it. They had to agree on the Tuesday night movie pick, and chose The Peanuts Movie. Oh my gosh, did they ever love that! On Tuesday, we had breakfast and they played a bunch, and then they could watch a morning movie -- Ginny's pick this time, and they didn't have to agree! She chose Frozen 2, which, of course, Junah declared to be his favorite even though he'd never have picked it nor would he have agreed to that pick. Then it was time for lunch, lots more play, picking zucchini & flowers, journaling (oh my goodness, their journals are so great!), and Junah chose the afternoon feature... The Peanuts Movie again! It was super hot outside, so we never did get out to ride bikes or anything that took more than a few minutes. 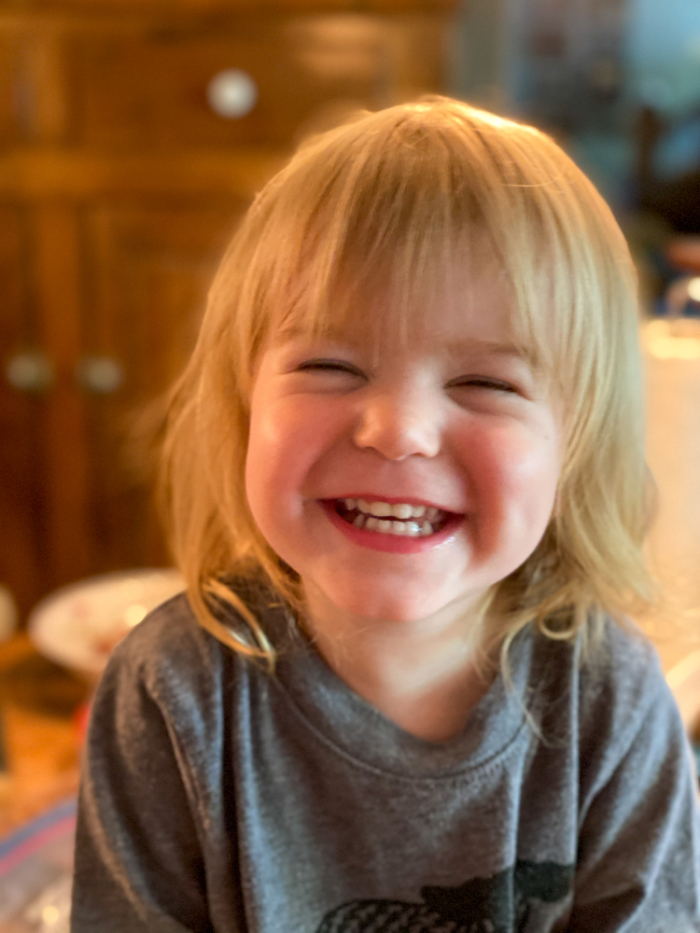 CHEESE!! This one is an absolute peach right now. Every little thing she does is cuter than the last. 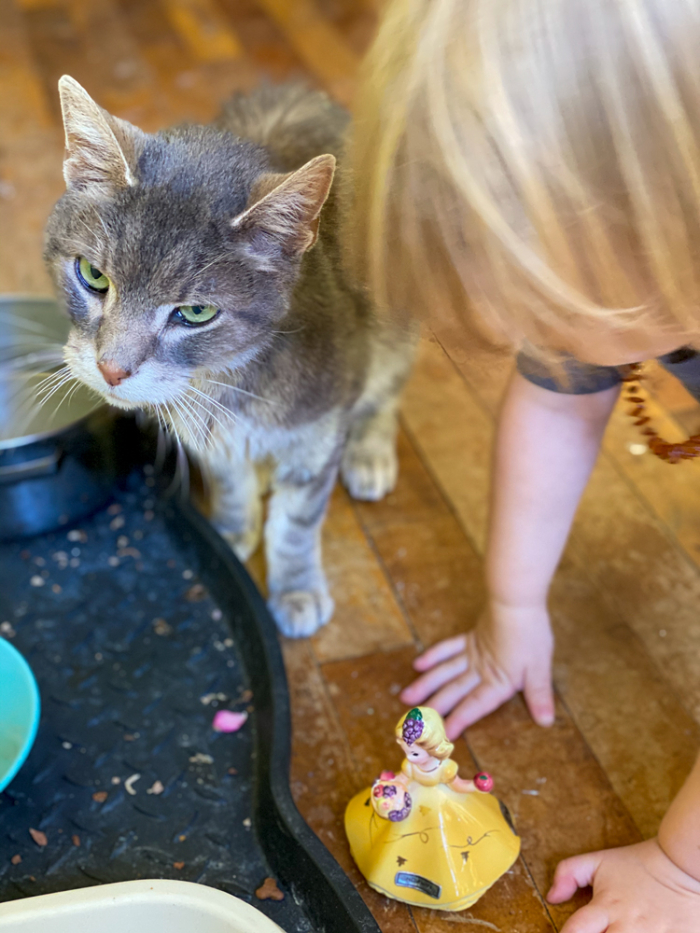 And she's a little sweetheart... our little Duncan is really slowing down these days (gaining tolerance along the way) and she's very attentive.

(In fact, we fear he's fast approaching the Rainbow Bridge.)

I mentioned the other day that I'd spotted Junah & Ginny from the Garden Room when they were picking flowers for me. Ginny headed out the door with Malina to do the same... "But don't look, Nona, OK?" 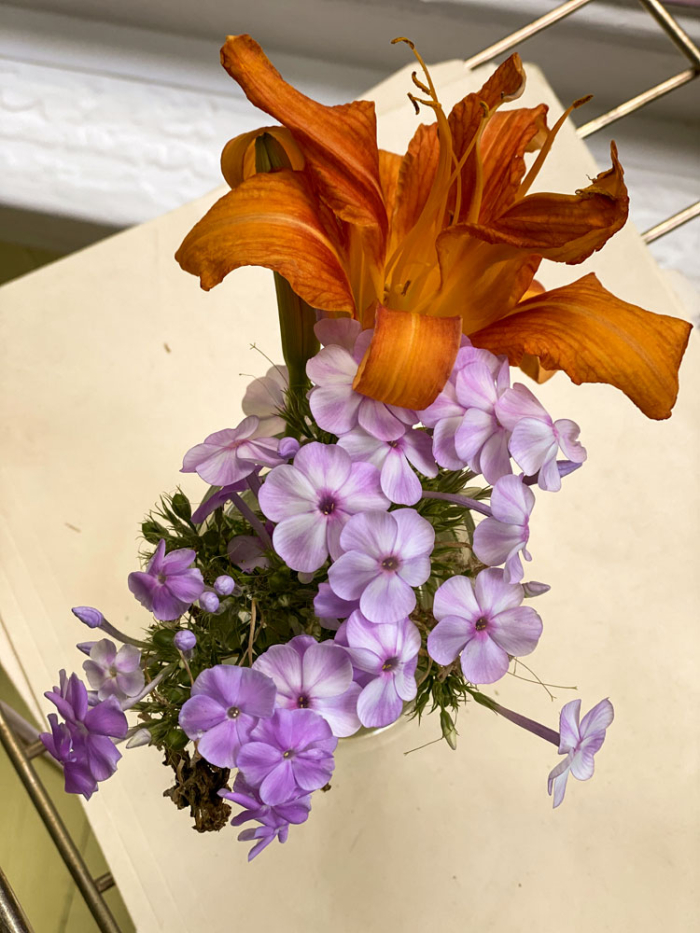 These had some stems, at least, so I could put them in water! Not shown: two orchid blossoms.

Lastly, I am anxiously awaiting delivery of my Ruth Asawa Stamps! 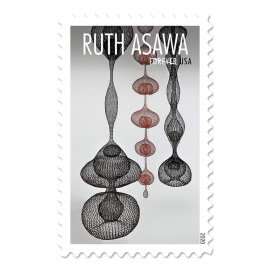 I pre-ordered the moment I saw the announcement, and I hope they're in my mailbox today.

I'm counting the hours till the start of a 3-day weekend... I'm ready! Maybe I can find some time to get caught up in blogland. Oh, that reminds me... y'all know that I'm not exactly stellar in the replying to comments department, but when I don't even get notification of comments, well... that's what happened earlier this week. I think it was the "Hello" in the title (I need to remember that there are trigger words).

I love when you have the kids because we get to see some lovely happy photos! I'm also pretty excited about the speed with which you are building/knitting houses. That project is going to rival Parcheesi!

I hope your PO delivers pre-orders faster than mine! I have better luck if I wait until day of release and then order. Seriously, they come a days faster!

These kiddos! I confess... I am so jelly! (although I got a FaceTime yesterday with Vivi's first EGG from here Easter chicks!!!)

I thought of you when I saw those stamps! Your blanket updates are making me a little green with envy. But those smiling, dancing kiddos are the highlight of this post. Enjoy your long weekend.

You always have so much fun with your grandchildren! And they are all darling -- especially your little peach!
The house blanket is truly darling. Seeing as it's perfect for scraps, I should make one some day.

I certainly hope you had time for a good nap after the kiddos left! It looks like a lot of fun but also exhausting to me.

The house blanket is going to be a real heirloom, I can already tell.

I love how much joy your grandchildren bring you! And I'm a little jealous that you're getting a new one so soon, too!

Thanks for sharing your visit with the grandies. They are always such fun. Little Malina is such a cutie . You have been busy-I'm exhausted by how much you fit into a day! I find your pix of knit and sewing projects inspiring.

Vicki, I am so enjoying watching that blanket come together ... and of course your times with the kiddos always makes me smile (and need a nap ;-)! and what a bittersweet moment with Malina and little Duncan (I saw your IG about him passing over the Rainbow Bridge). Hugs!

Those kids!!! Malina is getting so big. I can't believe soon there will be a 4th. So wonderful that they live so close you can have so much time with them. Memories in the making!