Our trial run to Calumet was made with a longer trip in mind, and a couple of weeks later we packed up and headed 3.5 hours north to the "rustic" Big Lake Campground at Northern Highland-American Legion State Forest. 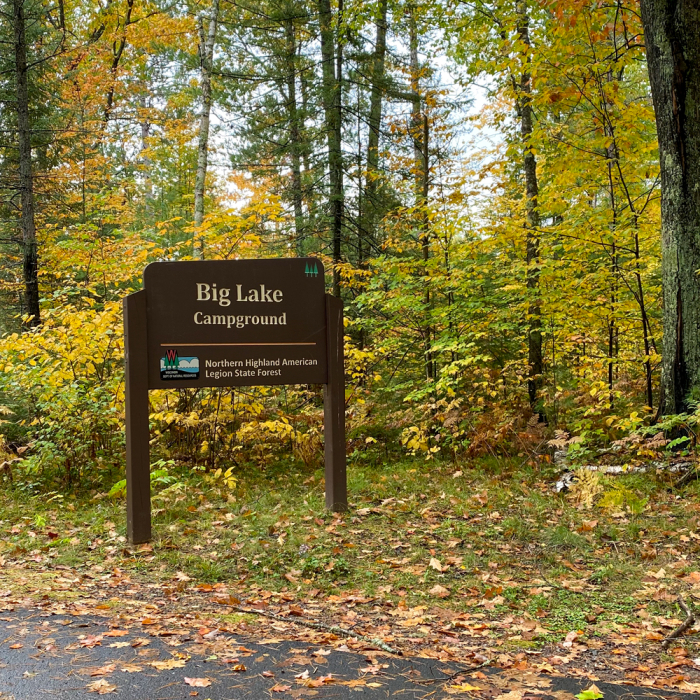 Kate had gone tent camping up here a few times earlier in the summer, and this was her favorite campground. We gave our site a good look upon arrival to determine how best to situate Ducky. Let me just say that we are newbies, and we're gonna be newbies for a long time... we learned a lot on this trip, too! 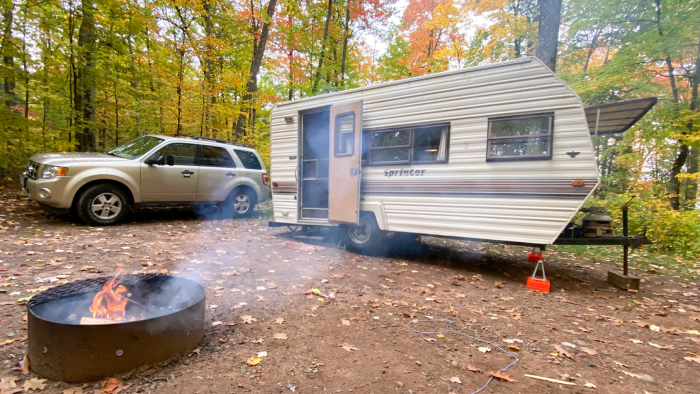 Most trailer campsites are either "back-in" or "pull-through." Well, we pulled right in to our back-in site, which we determined would work best given the lay of the land and the layout of our camper. We realized later that the better thing for us would have been to move the fire ring and the picnic table in order to back in, as that was the most level spot and would have given us a lot more privacy. Not that we were exposed or anything, we were in a nice hollow and there were lots of trees around us and between sites. And, obviously, we were able to maneuver my Escape around to the other side and, eventually, we (Kate) backed OUT of the site. That was surprisingly easy! We are both getting more comfortable and confident with the backing-up-a-trailer thing with each excursion.

You can see that our stabilizers are atop some levelers in the front (four, I think, under each), and there was barely room for the stabilizers alone in the rear. It was level and stable and it felt okay.

And then it rained. I'd mentioned that it only rained at night?  It did, but oh my goodness, DID IT EVER RAIN!! (And thank god for earplugs!) It came down so hard, so fast, so much on that first night that there were rivulets through our site... right under Ducky... right where those levelers and stabilizers are. It rained the second night, too, though not QUITE as hard. We still needed earplugs; both admitted later to middle-of-the-night thoughts of being washed away!

Oh the drama! We were fine, but these are lessons that will never be forgotten.

We only saw the sun on our last afternoon, but it was certainly comfortable enough to spend almost all of the daytime outside... the bugs weren't even bothersome. 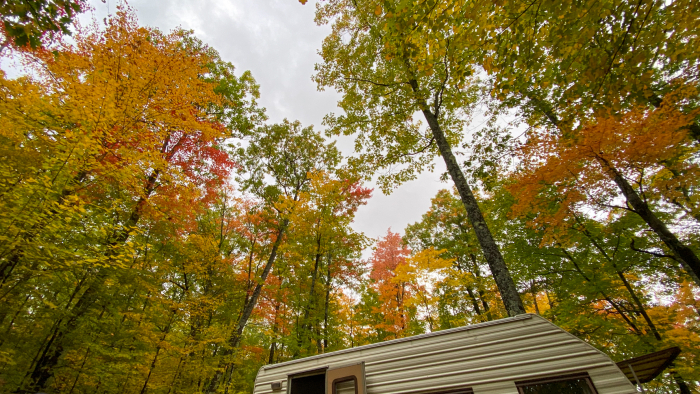 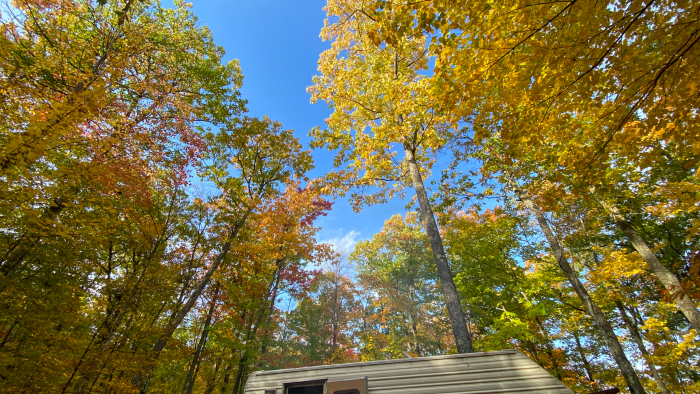 We were there for peak autumn color -- you can see the difference between arrival on Thursday and departure on Monday.

We spent a lot of time building and tending campfires (and running to procure more firewood)... not the easiest thing when it's been rained on all night, every night! But we managed. 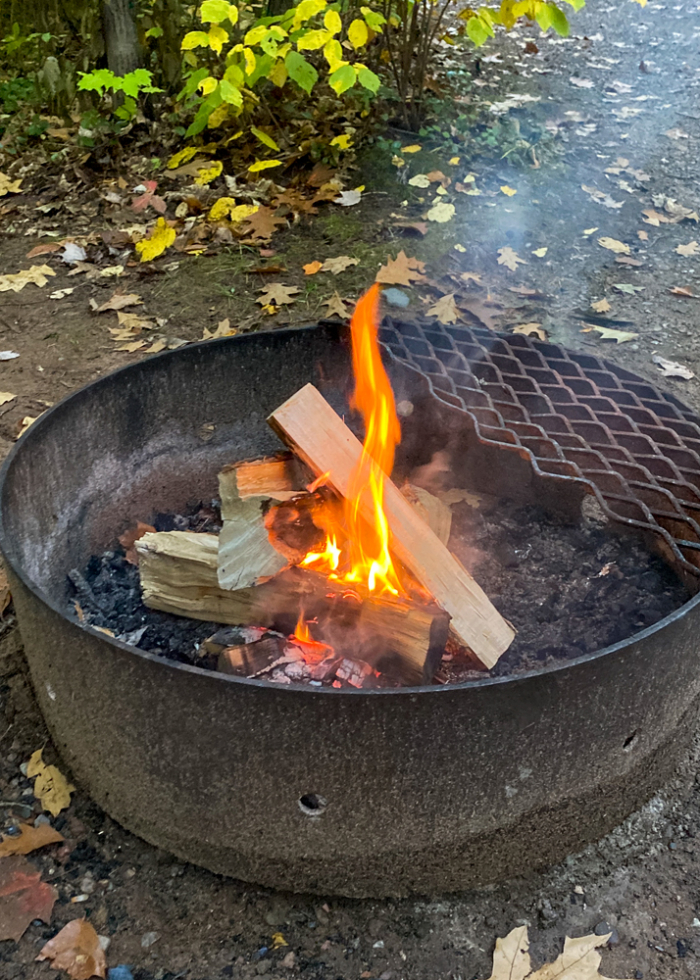 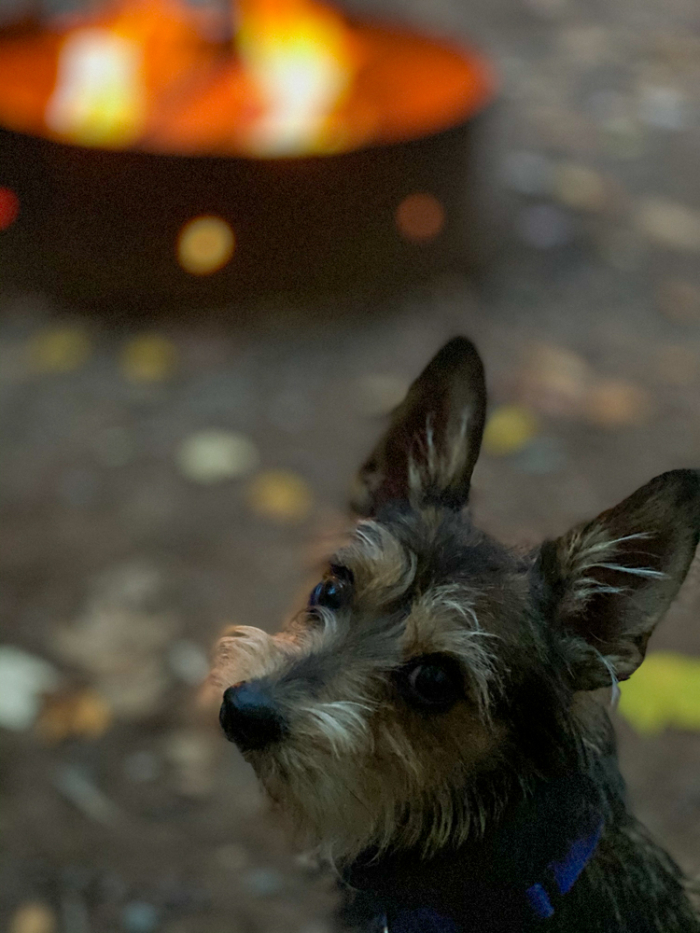 And we had McGregor!!

Our timing was perfect for a meet-up on Friday with my Uncle Jim and his friend Pat at the Discovery Center in Manitowish Waters where he was picking up a bat monitor to record activity near his place for a few days. It was great to see him, even just for a little while, and to meet Pat!

The campground was a bit more woodsy and interesting than Calumet, but I didn't hike much other than trips to the toilet with an occasional detour to the beach on the way back. It sure was gorgeous. 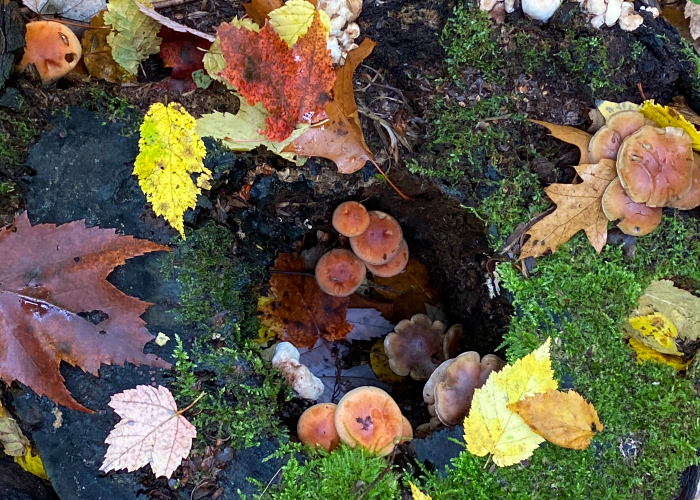 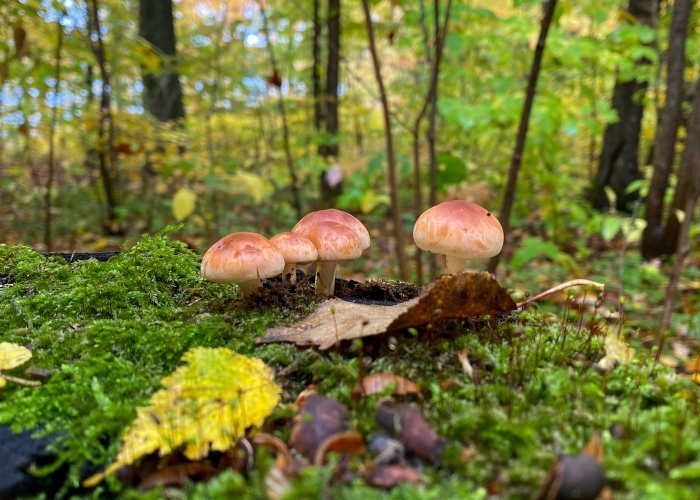 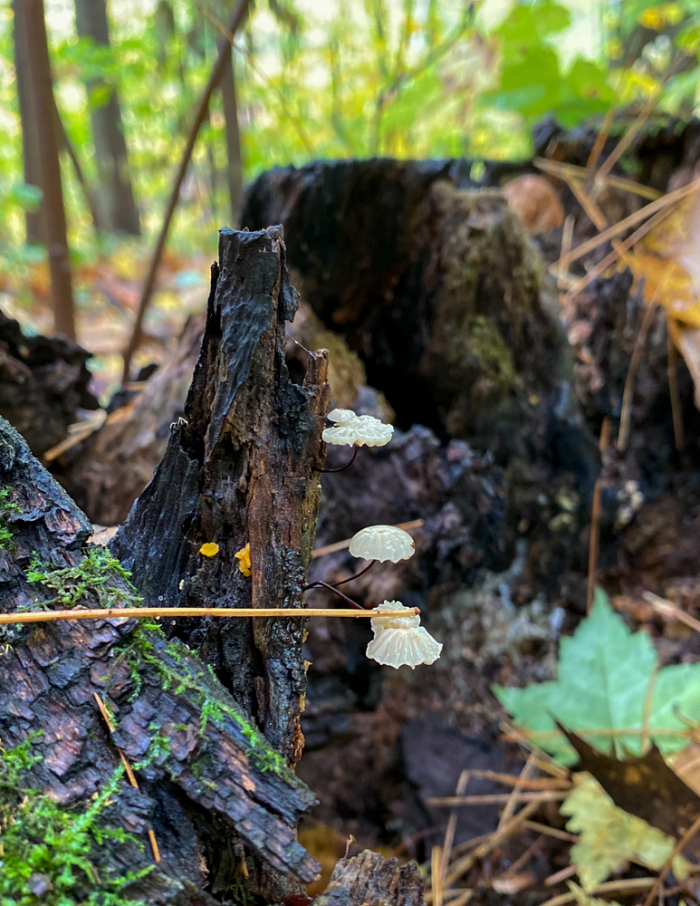 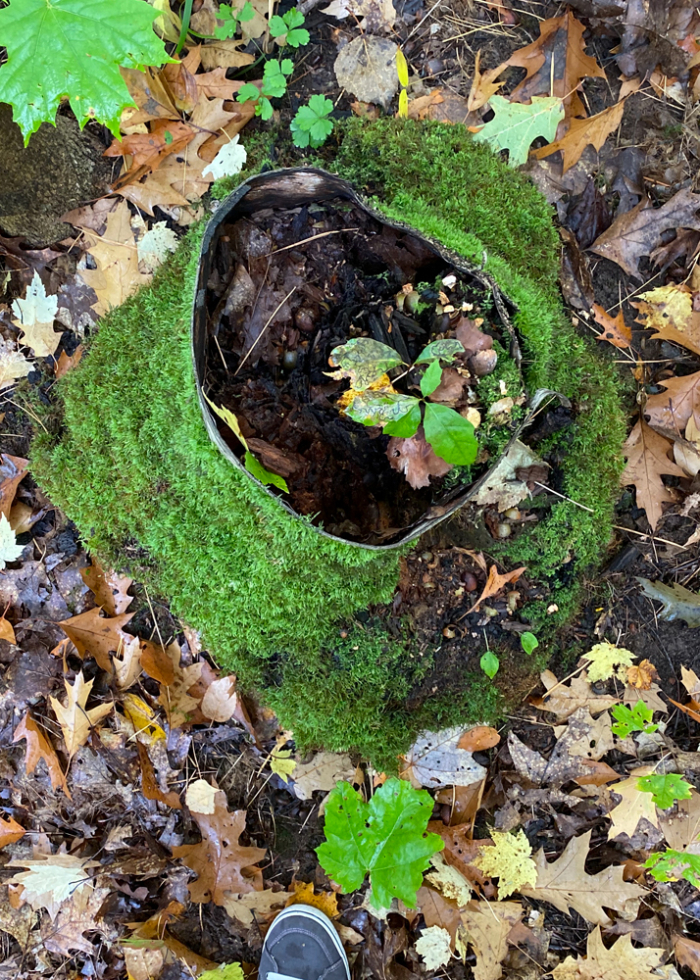 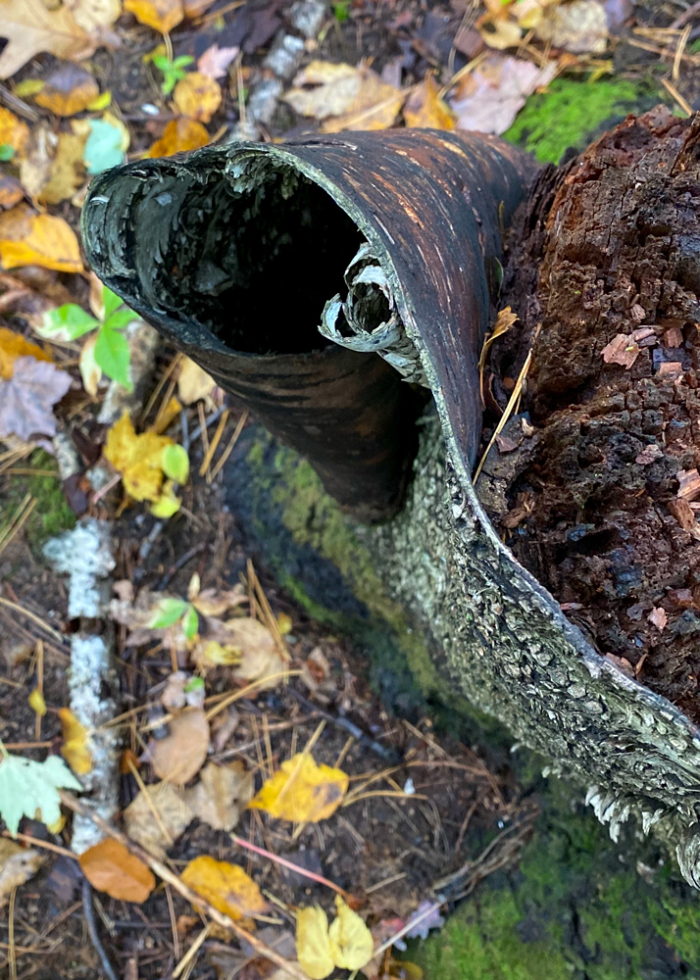 And, similarly, I spent most of my time working on the Safe At Home blanket for Davy... weaving in ends and seaming. 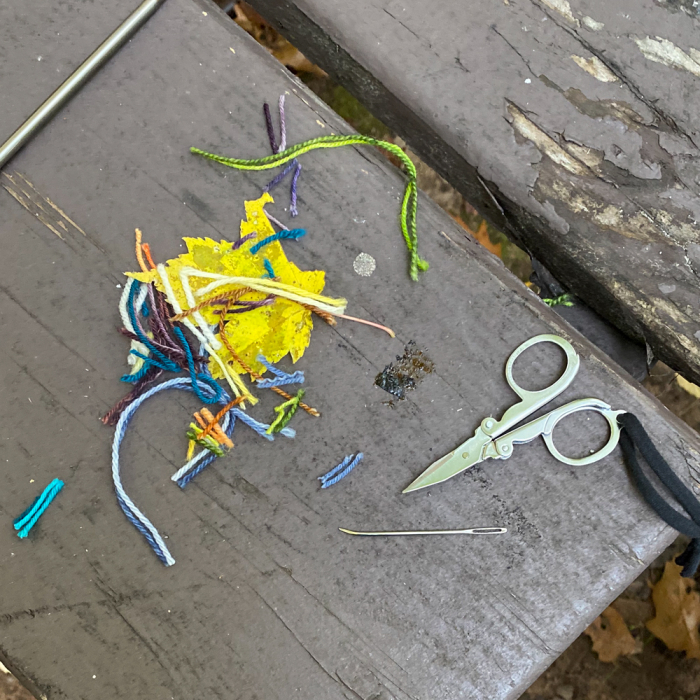 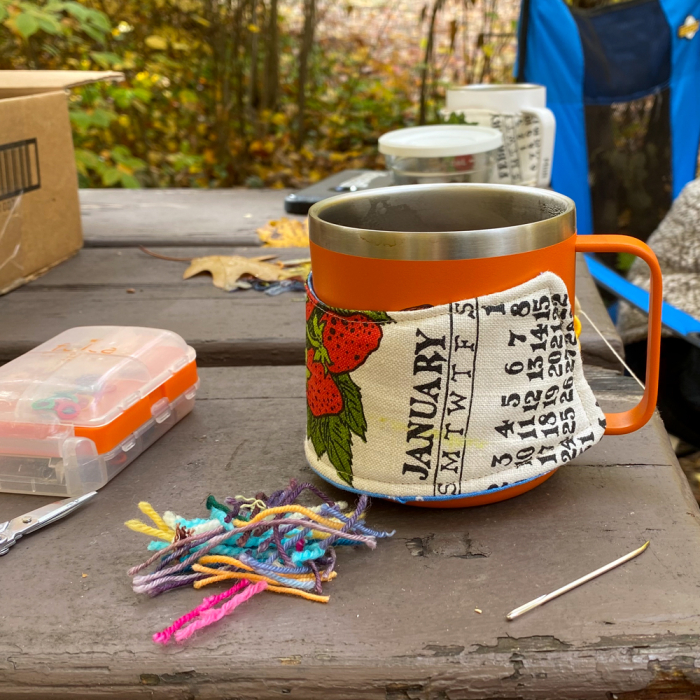 Lots of ends (that's a drop in the bucket)! It took a few tries to get the seaming method/look that I wanted, finally settling on backstitch and it's moving along -- I feel like the end is in sight.

So, Big Lake Campground is "rustic," meaning there are no hookups of any kind; there are vault toilets and non-potable water available at a pump. So we were truly on battery & propane power the whole time, and had to haul in our own drinking water! Ducky's "plumbing" isn't functional right now, anyway, so we didn't even miss it... though we did spring for a "luggable loo" type of setup (which we perched in the bathroom shower area) because there's no way I'm hauling my ass to a vault toilet in the middle of the woods in the middle of the night! And, you know, at least for me, having to GO in the middle of the night is an unavoidable fact these days!

We did some more campfire cooking: 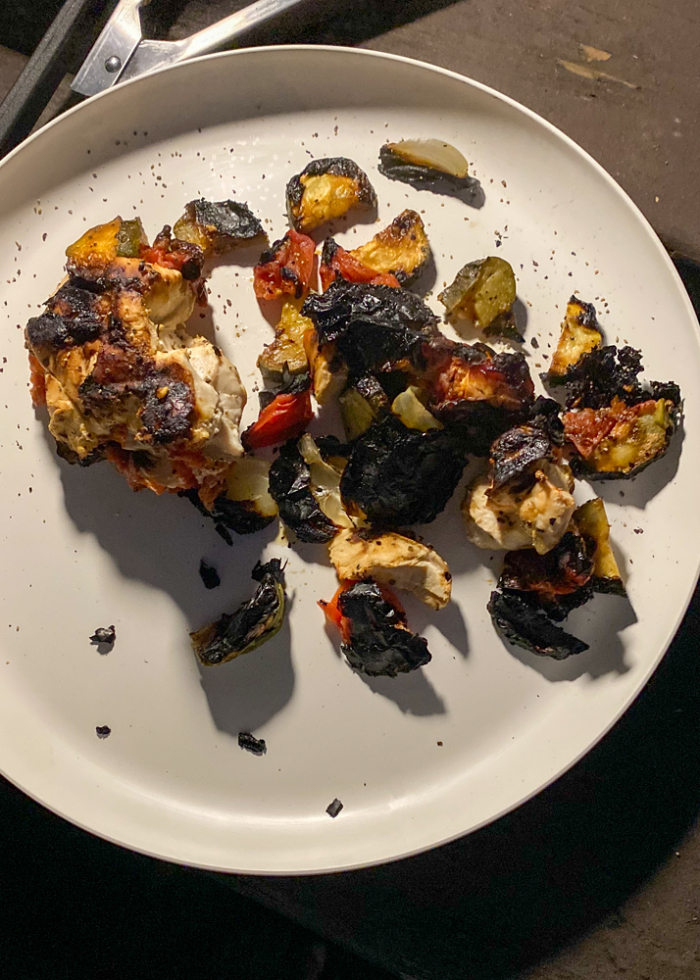 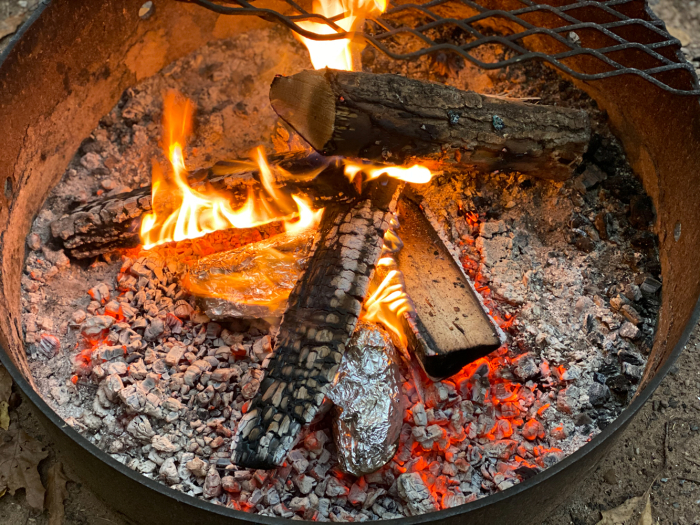 Chicken & veggies in foil packets, foil-wrapped potatoes to have with a yummy smoked pork chop from Nueske's. Those coals were HOT, and I'm still learning/perfecting my campfire cooking techniques, so the potatoes got a little singed (okay, burnt) on one side, but they were amazingly good. Yeah, okay, the chicken & veggies were also a little singed... I'm the type that likes my s'mores marshmallows FLAMING, so obviously I'm okay with some burned-y bits. Haha. 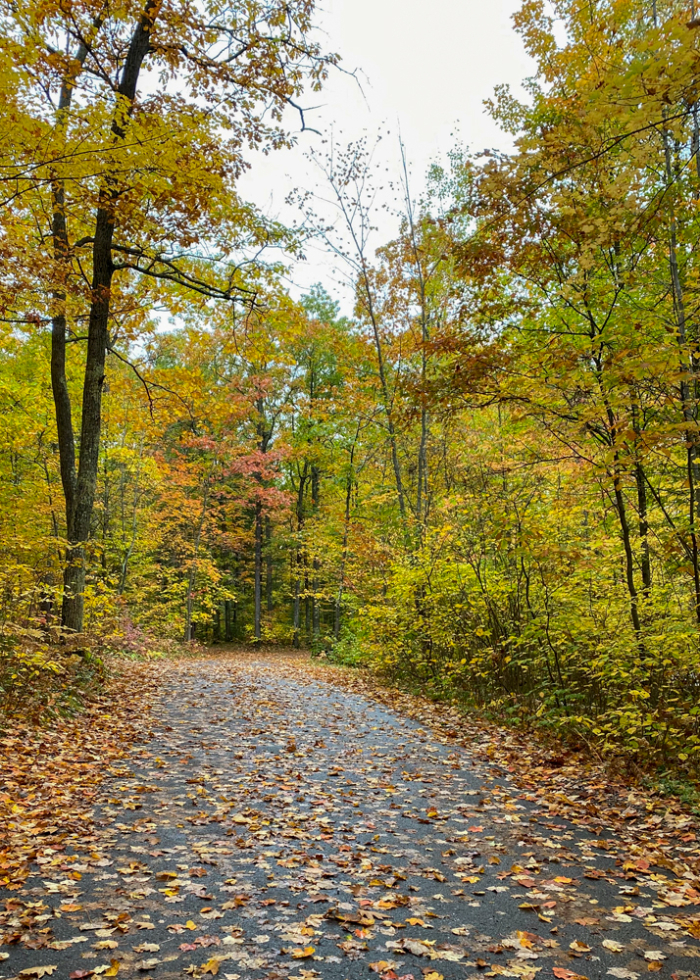 It was really lovely and, though not completely unplugged from everything... we were unplugged enough and it was great to take a break for a few days!

We cleaned Ducky up on Monday when we returned, then hauled him over to an RV service center to have a few things fixed/checked out. We're thinking of taking one more short 2- or 3-night trip in a couple of weeks, before it gets too cold, at a campground less than an hour from home.

Wow, those pictures are stunning! I am sorry it rained so hard (that would worry me too! But I think better in Ducky than a tent!!)

Ducky looks at home at Big Lake campground, and it sounds like you and Kate are quickly feeling at home with Ducky! Those pictures and color are beautiful, and I'm glad to hear you'll be heading out again this fall.

Some of your photos won't load for me but the ones that did are beautiful. Camping, setting up, hauling a trailer, it's all a BIG learning curve. Dale already did this when I met him so he just continued on and I always marveled at his ability to quickly assess a campsite and choose the perfect spot to put the trailer. It will get easier for you all, too!

This set-up sounds a little more rustic than I'd like, so I'm glad it was you and not me camping -- though I'd probably make do in order to spend time with your canine companion! I'm thankful that you had earplugs and didn't get washed away in all that rain.

I have done very little camping in my life, but Tom is pretty expert at it. (We only ever had a tent, though; never a camper.) Camping is a lot of work -- and I never got far enough along the learning curve to like doing it. I think it's just FABULOUS that you and Kate are just going for it -- and having yourselves some real adventures. What a beautiful campground -- and a wonderful get-away. XO

Some of those photos are just spectacular. And the word is "charred", not "burnt". All the fancy menus use it for something. LOL It seems that you and Kate are on your way to more adventures in style.

This looks like a perfect weekend! I'm feeling a little envy over your amazing new home!

Autumn colors are great there. Did you not bring a grate to put on the campfire? Would it help to bring charcoal for those damp times? I'm with you -traveling outside at nite for the BR is not for me! Your ability to deal with all the issues that pop up is admirable.

It sounds a little more rustic than what I'm up for, but WOW, Vicki, the views are stunning and the food looks pretty tasty, too! (and the thought of unplugging for a few days is awfully appealing right now ;-)