I scrolled through the blog looking for my post about our first camping outing for reference... and there isn't one! I never even wrote one because all of a sudden (though not unexpectedly... heheh) there was a new baby and it's been a little chaotic and nonstop since then (except for our second camping outing) (coming soon). 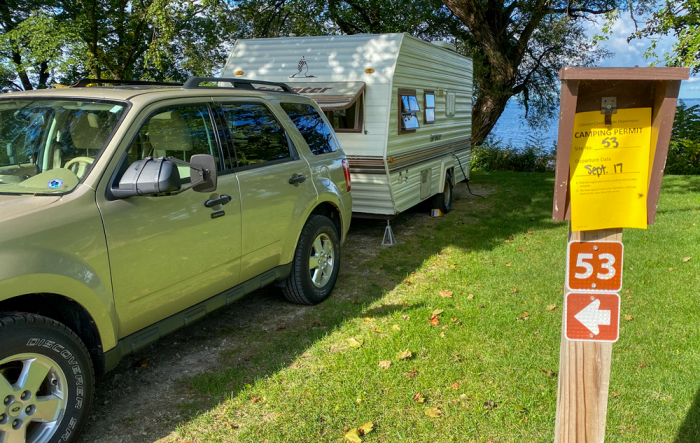 We hitched up on a Tuesday afternoon and hauled Ducky over to Calumet County Park, only 20 miles from home, for a two-night stay.

Newbies, we did our best backing in and setting up under the observant (but not intrusive) eyes of our neighbor a couple of sites away. A little nervous, perhaps, and wary of site conditions (level), we ended up about 8 feet short of being able to plug in our power cord. I'd had a fleeting thought about throwing the extension cord in the car when we were packing up, but didn't do that... so we were on battery power! We also had to remember how to turn on the propane power for the fridge. 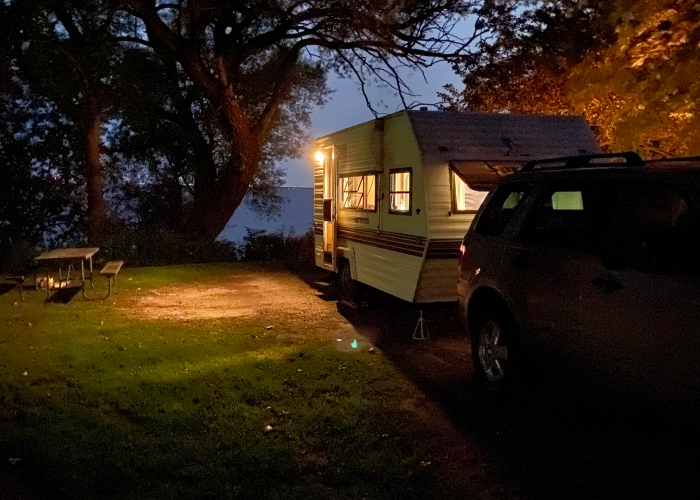 This was before replacing all of the interior lamps with LEDs that use a lot less power. We also have at least four small portable LED lanterns and headlamps, so we are not lacking for light!

Also at this point in time, I'd only replaced the "living room" couch cushions and the "dining room" area still had the originals from 1987. I slept in the living room and Kate slept in the dining room, and we could have held hands if we'd wanted. It's very cozy.

We made quesadillas for supper and didn't dally much that evening, but I do recall talk of dogs, and my photo roll supports that because... 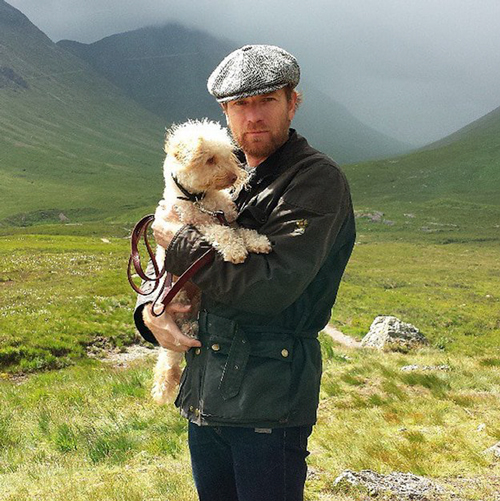 ...while searching for "Scottish boy dog names" or somesuch, I came across this photo of Ewan McGregor and his adorable dog and, well, the rest is history.

I had coffee on Wednesday morning in my new insulated and practically indestructible camping mug from KC&T! 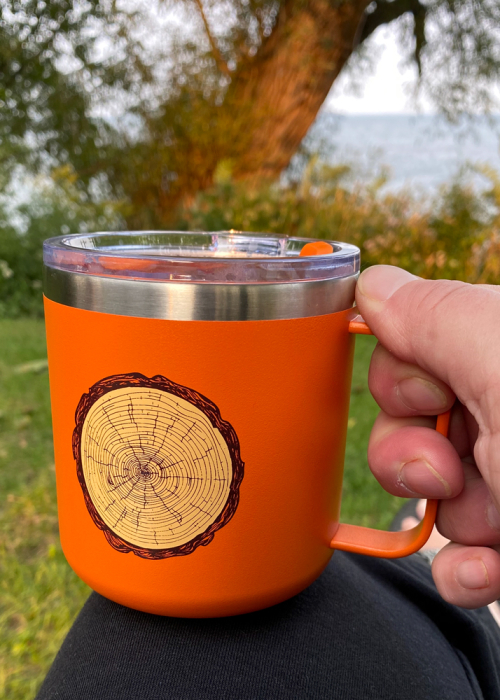 I posted this photo on IG and ended up shipping two mugs to the east coast for friends who had to have one themselves!

We made a run on Wednesday for a few supplies, including an extension cord exclusively for Ducky! Otherwise, I spent a lot of time knitting that day and finished the strips! 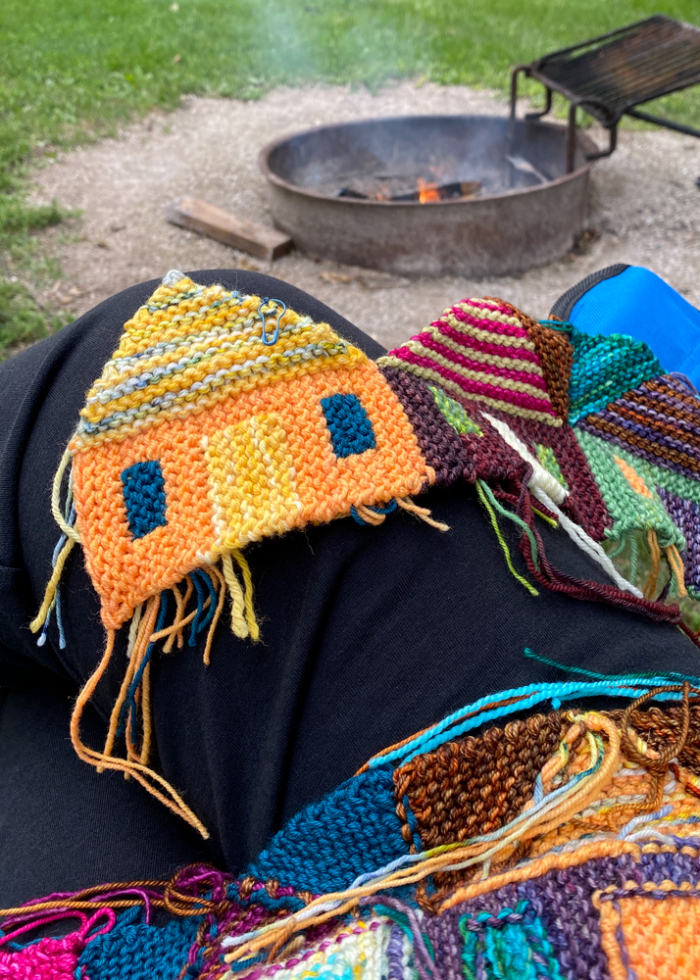 The little blue marker is holding a dropped stitch and was a reminder to pick it up when I picked up stitches for the roof.

We were close enough to home that Rusty came out late in the afternoon for a hike and to have supper with us. 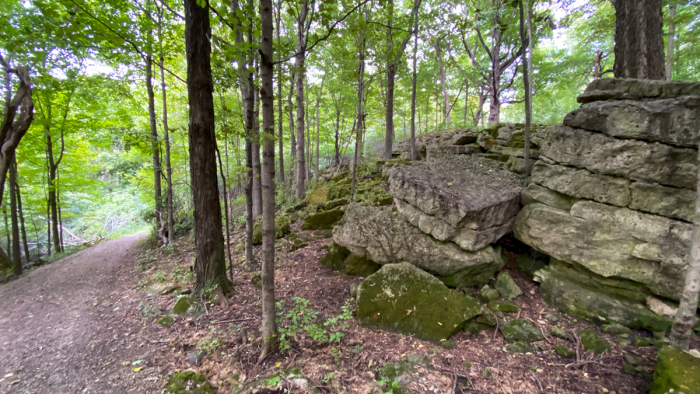 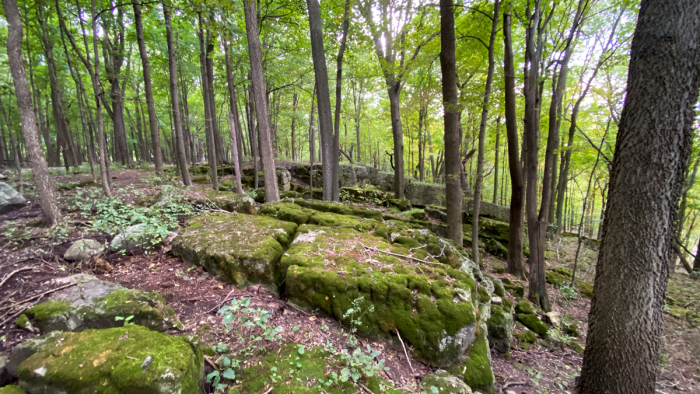 The park is located on the Niagara Escarpment, and it's pretty cool. 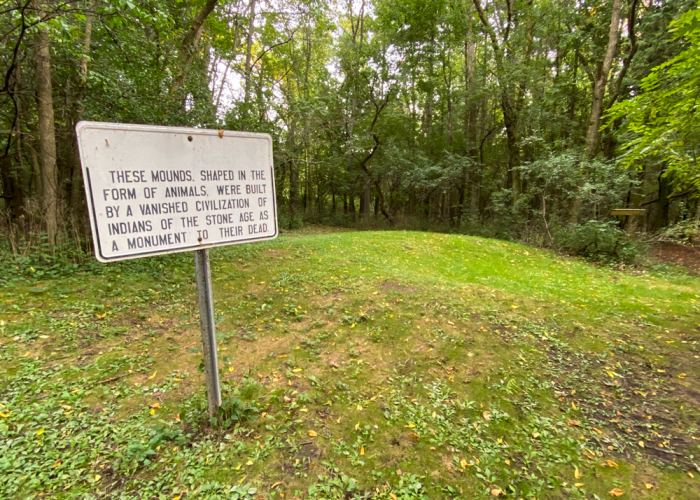 It's also home to a few effigy mounds, of which Wisconsin has many. 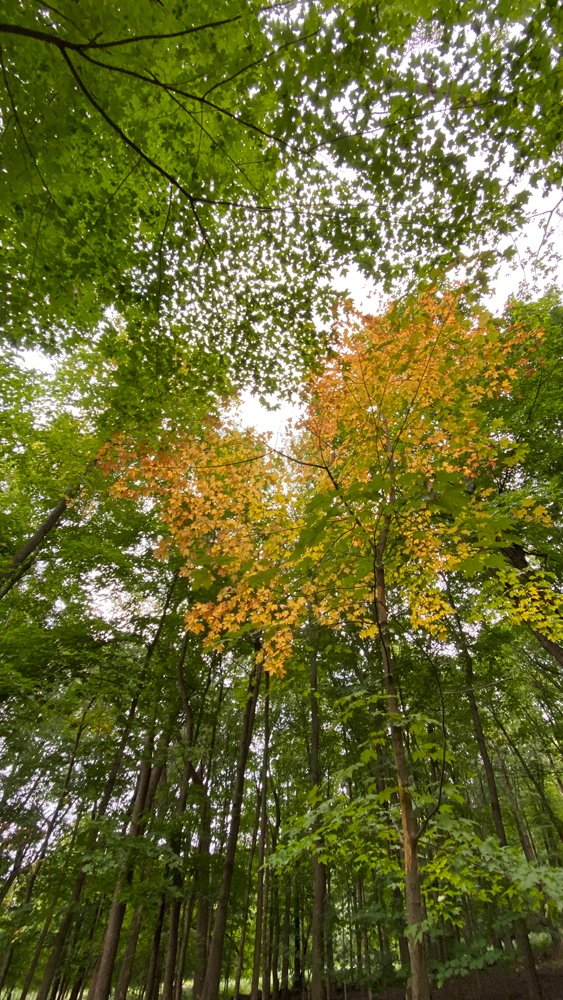 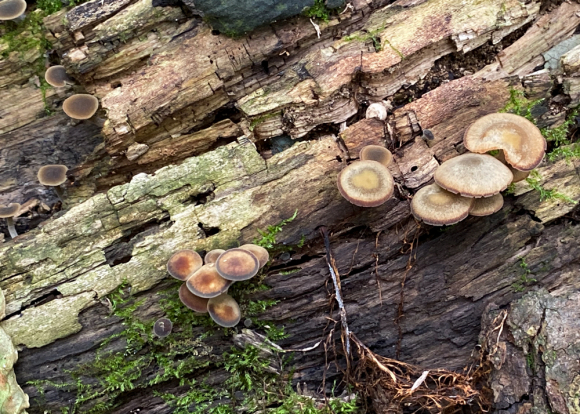 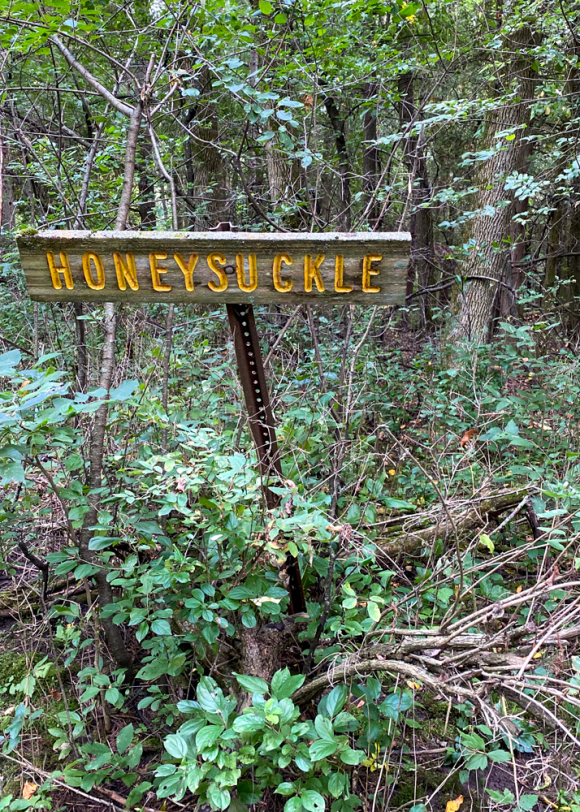 A few leaves were starting to turn... and it was just a nice walk.

While Kate and Rusty stoked the fire, I prepared fish & veggie packets to cook over the coals. 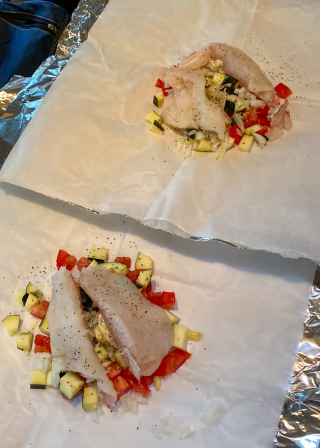 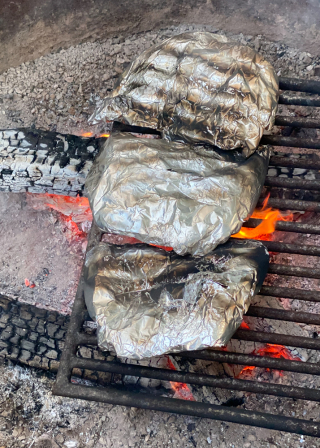 They were overcooked a little bit... 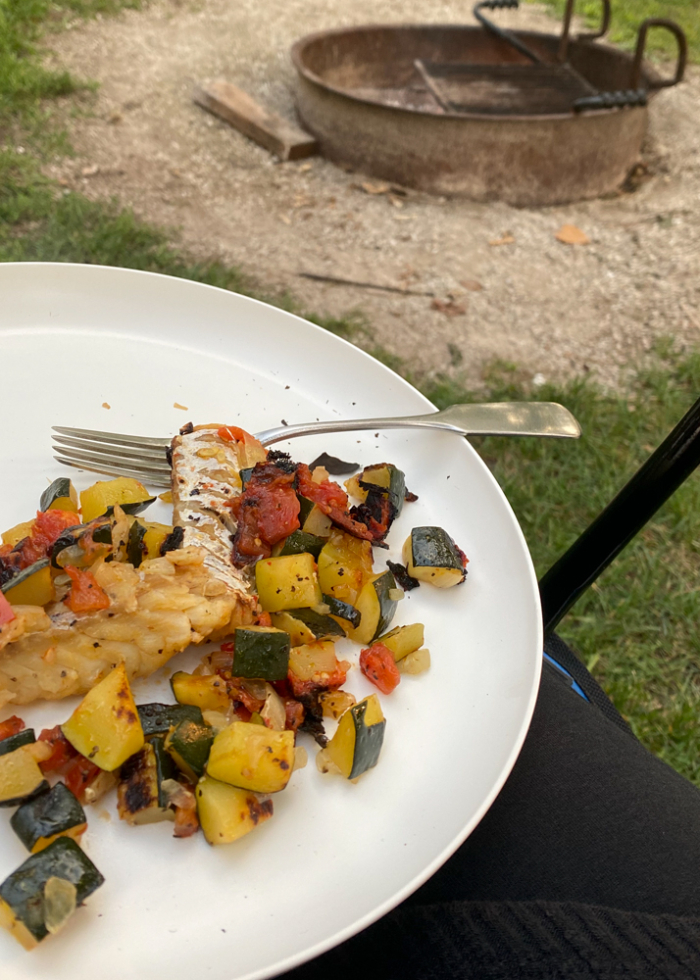 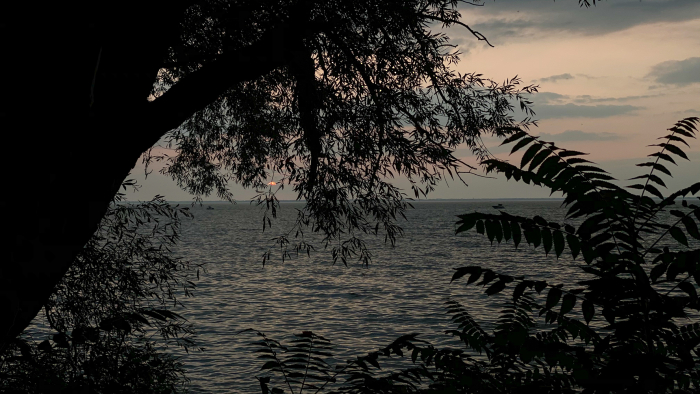 Not a bad day.

Day 2 began with coffee and pancakes (or panpakes, as the kids say) for breakfast! 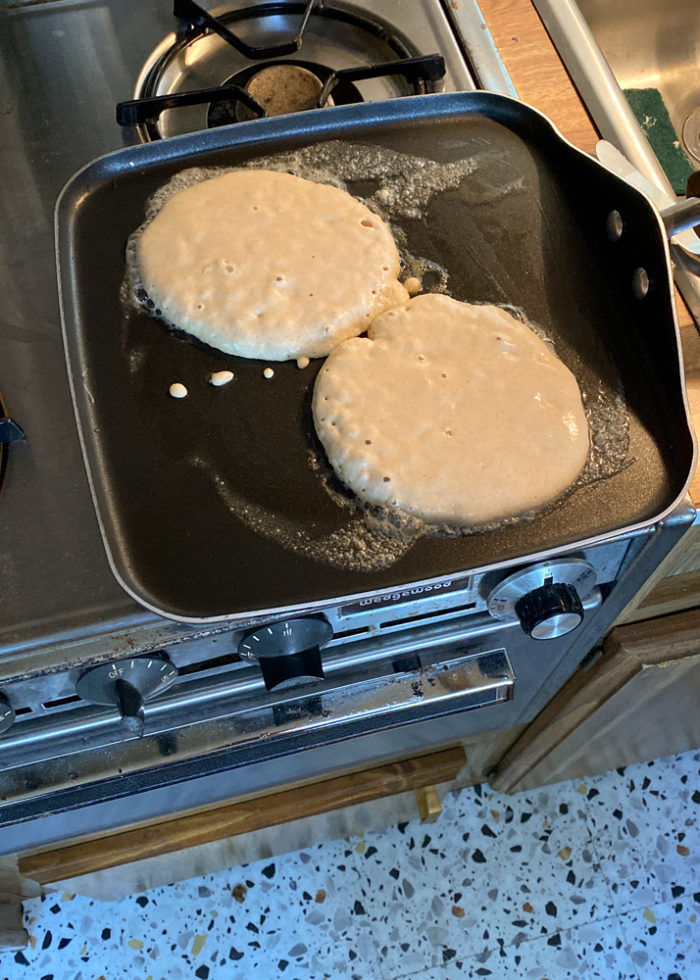 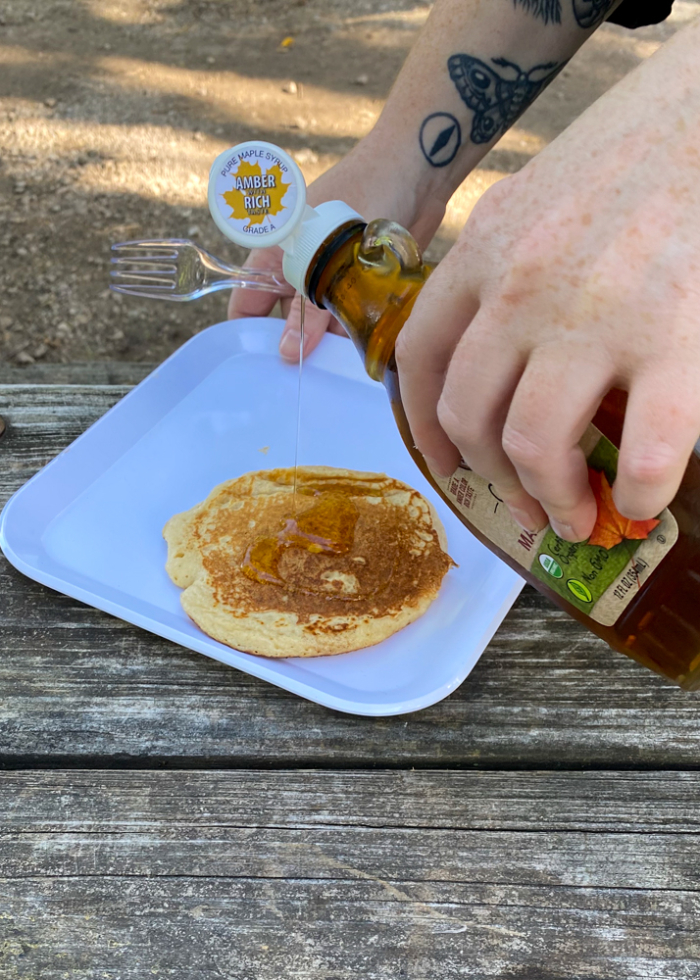 We cooked 'em on Ducky's little stove and dined at the picnic table.

Playing tourist a little bit, we drove down to LaClare Cheese Factory. We are no strangers to the area, as we prefer traveling on that side of the lake whenever we're pointed south -- Milwaukee or Chicago or beyond -- but in "travel mode," we rarely stop anywhere. 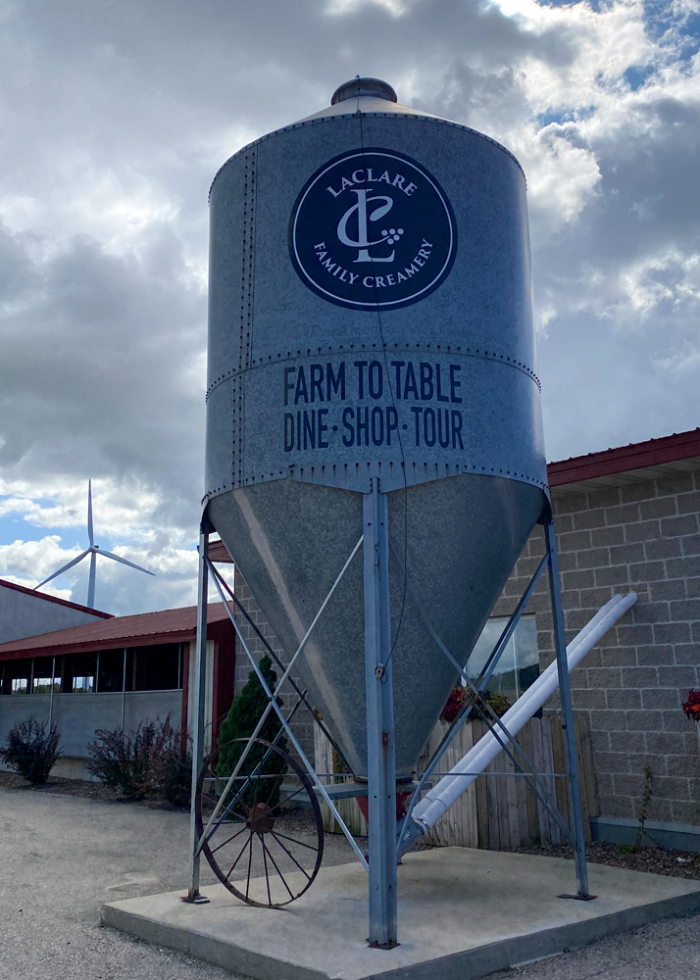 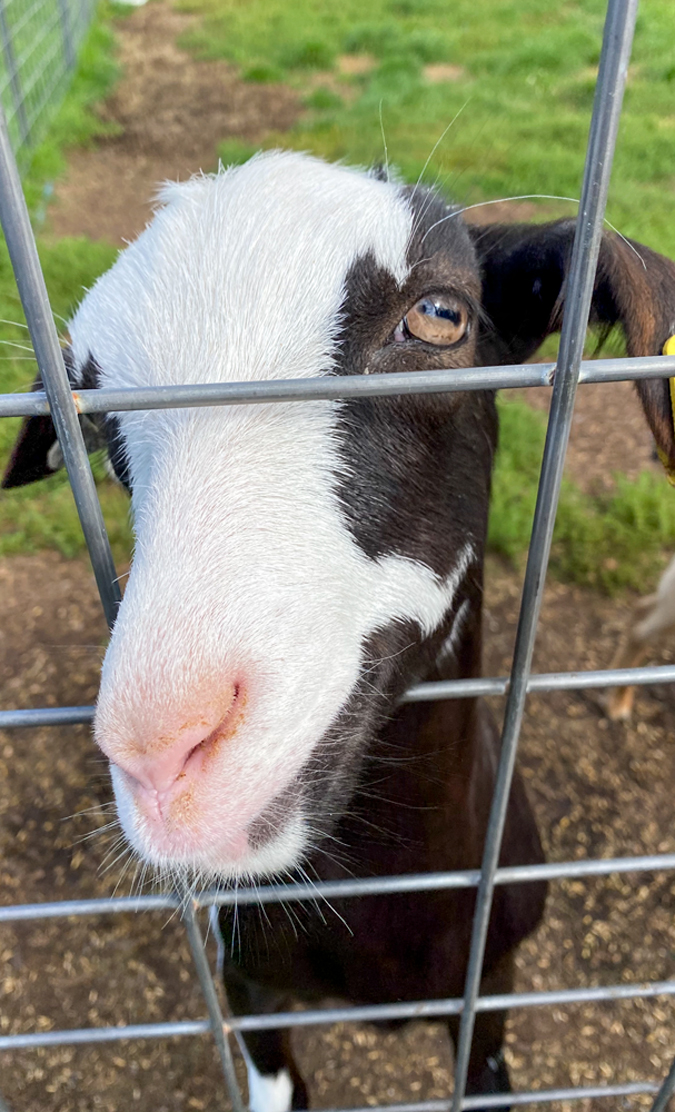 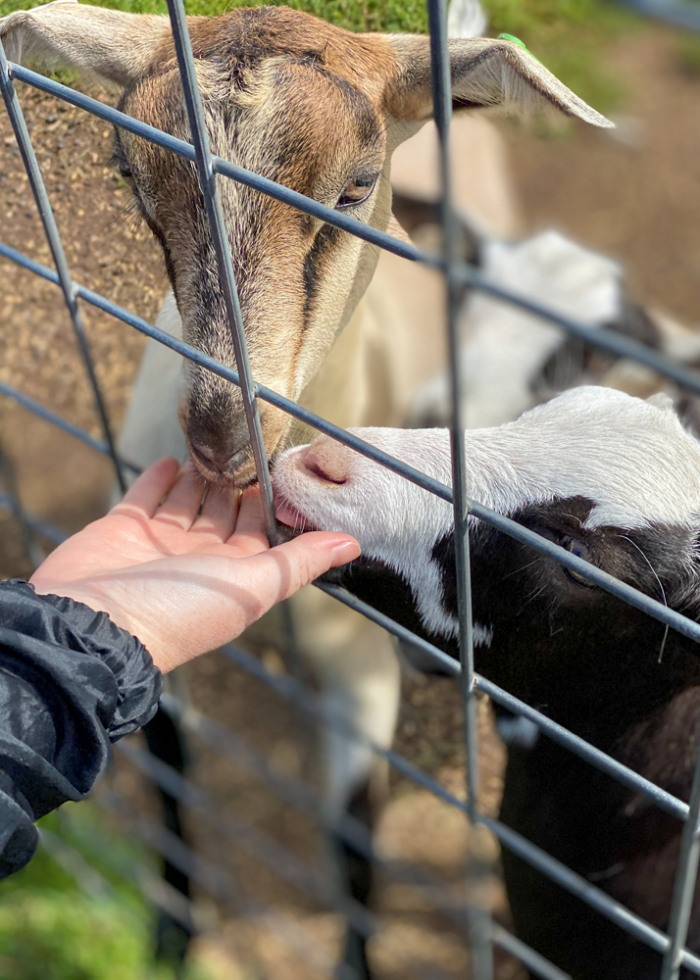 We greeted some goats, and bought some great cheese and sausage! I took a photo of these cheese wheels through a window, aren't they gorgeous??

After that outing, we de-camped and headed for home. It was a great little first trip and gave us a little more confidence to head a further afield and for longer. More on that outing soon!!

What fun, Vicki! I love it! (and they were canpakes in our house for the longest time, lol)

I'm glad you backed up a little to tell us about Ducky's first outing - it looks wonderful! I think everything tastes better outdoors, and I bet you slept well, too. A trip 20 miles away sounds like the perfect try-out for you, Kate, and Ducky, and I hope you enjoy many more!
P.S. That cheese is beautiful; at first glimpse I thought it was pottery!

You could not skip over the maiden voyage of Ducky. I had some friends that were devoted campers and every year they took their "rig" about 20-30 miles from home for a long weekend at the start of the season to see if anything had changed or needed tuning up before the season began in earnest. They camped all over the US mainland.

ONLY you could make camping look like so much fun! thank you for all the glimpses into your adventures! (also, LOVE the cow faces. and Ewan ;-)

I'm not much of a camper, but this looks like so much fun -- especially the goats!

What a great first outing, Vicki! I'm not much of a camper myself . . . but I think a "Ducky" would make all the difference in convincing me that it's a great way to go. You guys are going to have so much fun!
(I have a coffee mug just like yours -- with a different design on it. It is The BEST. It feels good to use, and the coffee stays Just Right for a very long time.)

I just love reading about your camping adventures and seeing the great remodel of Ducky. I'm curious about the mosquitoes thought as we had big problems with them when we camped in Wisconsin.

Oh I'm so envious!! We did not get away this year and I really missed it. I can't wait to show Fletch all your pictures. Great that Rusty came out for a hike and dinner - Fun!! And foil packets done over the fire are always good. Those mounds are so cool, aren't they? We saw a bunch in Ohio.

I'd call your first camping outing a grand success! It makes me long for the days when we had a camper. Some day I really hope we'll get back to camping.

What a great outing! I kept looking for a post, thinking I missed it. We have Indian mounds in OH. but they aren't shaped like animals. I'm looking forward to your next adventure with Ducky!