Why does it always take three tries?
This about sums it up...

I haven't posted anywhere else yet... this is the "first look" at something you've seen nearly every step of the way. Haha. 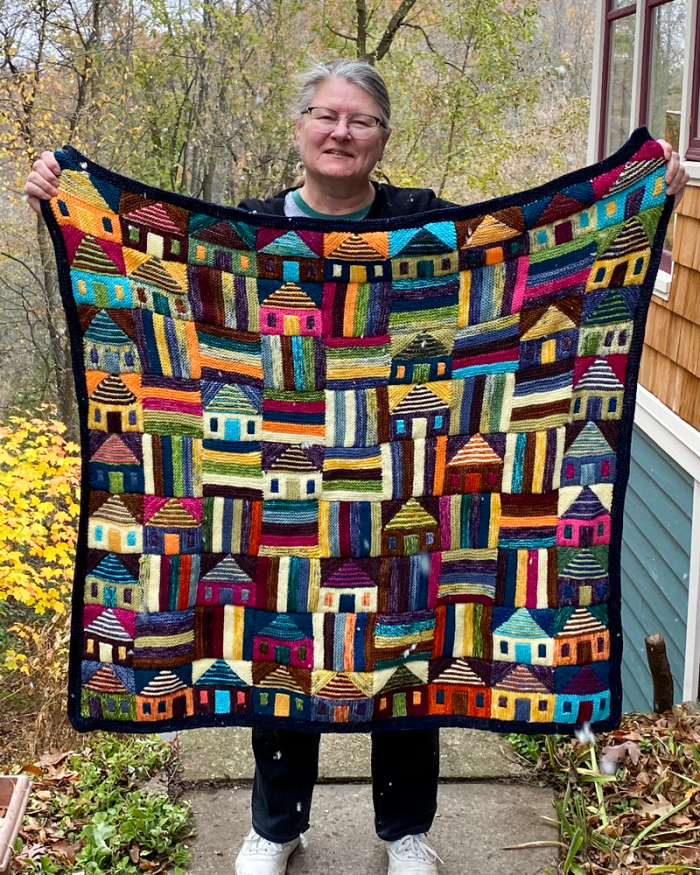 I FINISHED THE SAFE AT HOME BLANKET FOR DAVY!!

Rusty's so cute, offering to take my photo with the blanket a few times as the end drew near, so I took him up again for a "first look." I have something else in mind for the official FO images & post, though, so stay tuned. And, YES, if you're looking closely... those are SNOWFLAKES!

I'd shared a photo on FB on Saturday night, four corners & two sides done, with a hopeful prediction that I'd be finished by "the end of the football game tomorrow," which, to anyone who knows me, knows that meant "the Packer game." 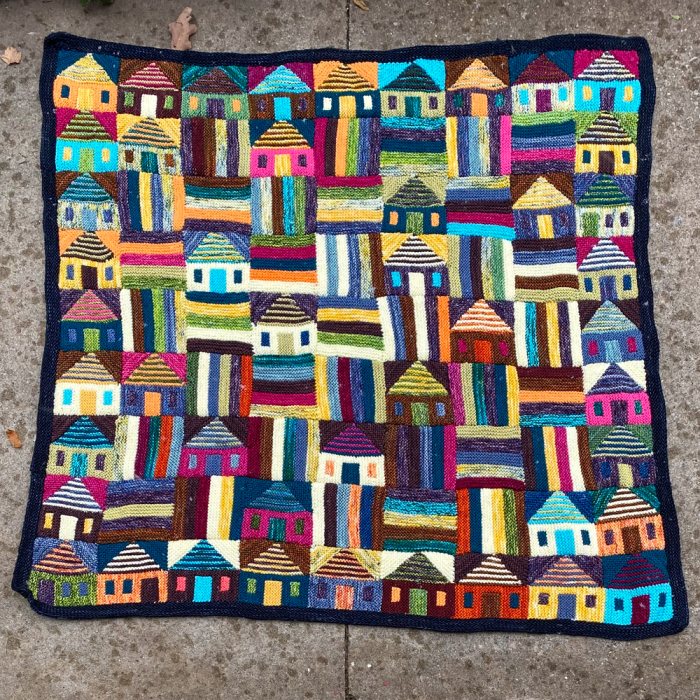 I didn't actually say which football game, though! Ha. I was so close by the time the Packers logged their win... then the network went immediately to the end of the Detroit game and, lo, I wove in the last of the border ends just as they won with an extra point at the buzzer! Anyone who knows football knows that I'm not naturally a Detroit fan, but I could only be happy for everyone at that very moment. 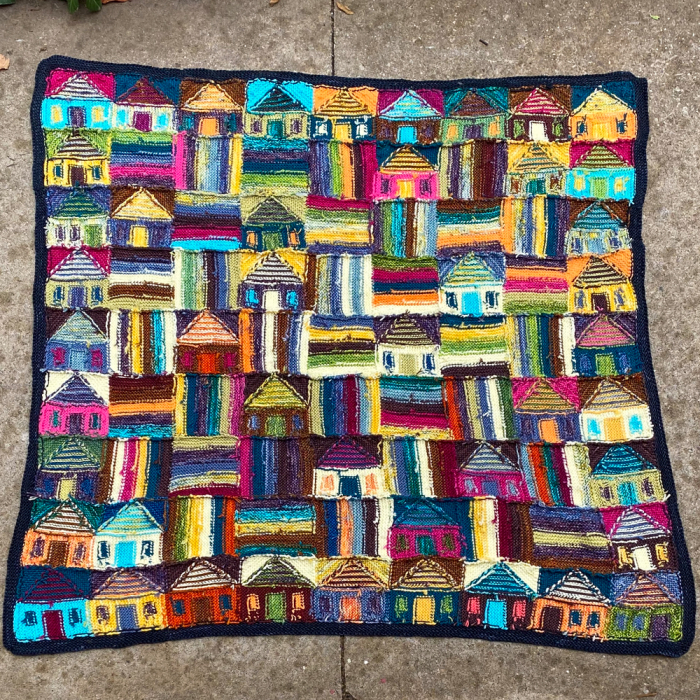 There's a photo of the back... I think I've woven in & trimmed all the ends! I knit the border in sections -- four mitered corners (along four blocks each), and then each of the four sides, sewing up tiny little seams as I finished.

Thanks for coming along for the ride, folks. I've appreciated every nod of approval and/or awe (or was that "are you nuts?") along the way!

Absolutely amazing. It is perfect! Thanks so much for sharing this project. It didn't encourage me to knit one (ha) but it did make me wish I had one, all finished, on my couch! You can be very, very proud.

AWESOME! So much work & so well done. You should be VERY proud. You have created an heirloom.

Fabulous! What a lot of work and perseverance and I'm sure looking back, totally worth it. It's a family heirloom for sure. Congratulations!

It's incredible and wonderful in so many ways! I adore it and you must feel so proud (and relieved!) that it's done. I'm excited to see your official photo shoot but I'm glad you decided to share these photos with us first!

GORGEOUS!! This is truly a work of love (and a family treasure!!) I am cheering wildly for you!!

Oh my! Nothing else, just oh my! Well maybe a whisper...i'm in awe. Envious Gorgeous. Beautiful.

Stunning, beautiful, and amazing! I've always wondered if I would see a handknit blanket that would rival your Parcheesi and I think I just have!

Well, you certainly gave Parcheesi a run for the money with this gorgeous piece. Getting regular updates has been a string of bright spots in a time of stress and worrisome news from the world. I can't say that you tempted me to create one... but you've come closer than anyone else in getting me to consider knitting a whole blanket. Looking forward to the official wrap of this piece. Now, what about those tempting Halloween tidbits you've been sharing?!

Beautiful! Thanks for sharing.

Your blanket is just stunning. I love the balance between the houses and striped blocks. I’ve enjoyed being able to peek in at your knitting journey on this heirloom. Lucky Davy!

I am in awe of you -- this blanket is a work of art and a true heirloom for Davy!

It's amazing and one he will treasure forever.

Truly, this is another fabulous epic of a knit for you and your family! You create heirlooms with almost all of your knitting, Vicki, as is evident by the posts on this blog. Being along for your adventures in knitting through the years has been an honor!

Clapping and jumping up and down for you Vicki! It really is a remarkable piece and a wonderful treasure for Davy and his family!

Looks fabulous! I love how you spaced all the houses differently.......
I love that it will represent this time of hunker down, and that, in the future will be a physical representation of how "this too shall pass" can be relied. on.

I will admit that when you said the border was going to be black, I had some doubts. Not any more! The black really sets it off - this is stunning!

oh Vicki, it's AMAZING. I honestly never thought I'd see a piece to rival Parchesi and here it is. done by you. and made all the sweeter that it's for your FOURTH grandchild. Davy is a lucky boy to be wrapped in all that love (and I'm pretty sure he's gonna figure that out soon enough).

Wow! Your Safe at Home blanket is just stunning! It's so gorgeous and colourful. Well done with all those ends.

You've created a family heirloom. It is gorgeous! . The border makes a pretty blanket stunning. Can't wait to see Davy with it.

that is such a fabulous project and what a special gift for the baby! so so cute!
love, kisses & magical wishes!
~*~