Why does it always take three tries?

This is the second attempt at a mitered border: 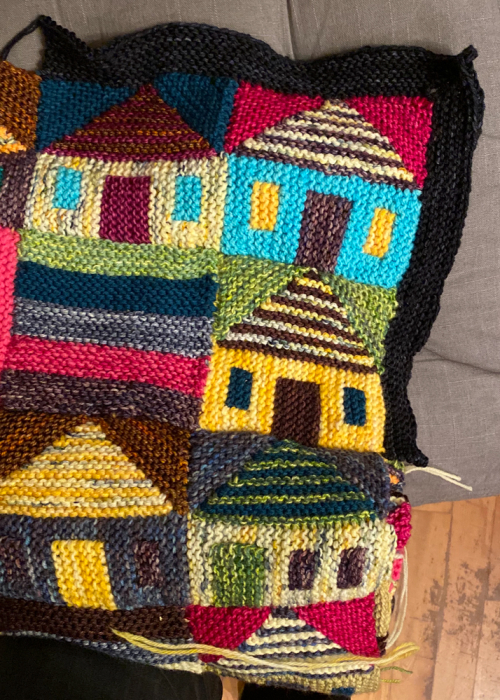 It's way better than the first, but still a little loosey-goosey, especially at the corner.

Actually, now that I'm looking at it, I might be picking up too many stitches. So, that's what I'll try next.

We were supposed to head to a campground today after work, but it's raining and cold and it'll be getting dark by the time we get there... I could handle it without the rain. So, we're going to wait until tomorrow morning.

We picked up Ducky at the RV place on Tuesday and I'm so happy! They replaced some corroded wiring and the outside running lights all work, not to mention the brake lights! We're still going to keep the magnetic ones on and plugged in (since we have both 7-pin and 4-pin ports), because you just can't be too safe. The Explorer is such a better match than the Escape for towing, but we had to get (another) new ball mount because the hitch receptacle is so much higher!

Meanwhile, and apologies if you've already seen this on IG and/or FB, but we are STOKED! 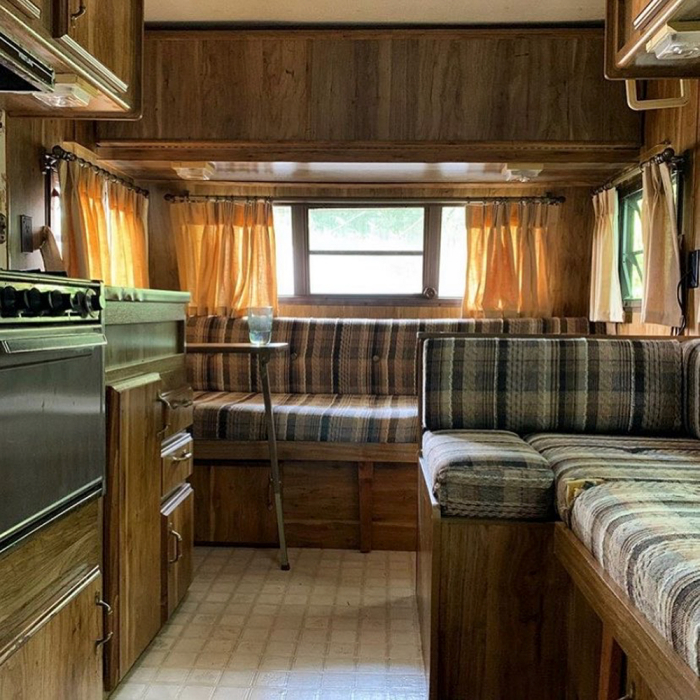 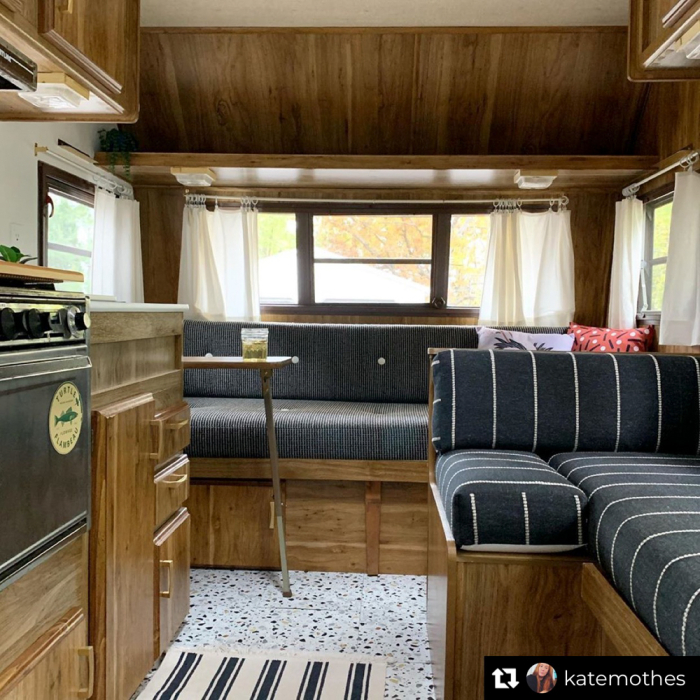 Before > After. We could play SPOT THE DIFFERENCES! haha. I'll give you two that aren't discernible: all of the lens covers for the light fixtures were removed and cleaned (b-bye bugs) and the bulbs were all replaced with LEDs! 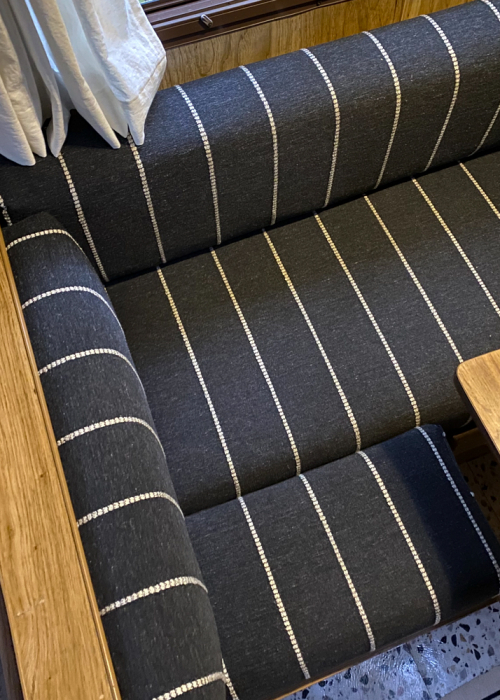 I'm very proud of my matching stripes, which was done from memory because the big seat cushion was in Ducky at the RV place when I sewed the little ones. The stripes actually match seat-to-back, too. Originally there were little strips that joined the back cushions to the seat cushions... that would have been a real pain to replicate, but I might have to come up with some sort of solution. It would help keep the cushions together when they're acting as a bed, though that hasn't been an issue we've noted.

Ducky looks wonderful and I'm hoping for better weather tomorrow so you can enjoy his company this weekend! That upholstery looks better than professional and I hope the third time is the charm for your mitered border.

I l.o.v.e that navy stripe! So smart looking. You will enjoy Ducky for many moons! I am sure you will get your mitered border to work the way you want it to...I am so impressed with the entire blanket.

All of this is beautiful and amazing Vicki! You've made marvelous improvements to Ducky (aren't LEDs the best??) - those new cushions are so nice. The interior is much brighter (and prettier) now. Hope you have a great weekend of camping. And the blanket! Davy will soon be wrapped in love!

Everything looks wonderful! I'm very impressed with your matching stripes, those cushions really look great. I think I'd be tempted to paint all that woodwork a neutral gray, too. It's only money. You're talking like a true camper now!

Ducky looks fabulous, great sewing and matching. I have not done a border on my blankets as I finish them with four stitch I-cord. It's easier to get around those corners, easier to pull out and fix if you need more or less to get around the corner and it keeps the blanket nice and flat. Love those houses.

I saw the photo on IG and showed it to my daughter, and we were both very impressed! The new cushions still give a nostalgic feel to Ducky but look fresh and modern at the same time.

As to the blanket, have you considered doing a log cabin-style border to eliminate the need for mitered corners?

I hope that by the time you're reading this, you're happily ensconced at your camp site and enjoying a lovely (hopefully dry. . . ) weekend! Ducky looks SO GREAT! You guys did such an excellent job with the transformation. I love it. And . . . yeah. I think you're picking up too many stitches. Hope the third time is truly THE CHARM. XO

You all did an outstanding job modernizing Ducky and will have many happy adventures using her. I've very impressed with the cushions an how the stripes match. Enjoy!

Those stripes! Have a wonderful time this weekend Vicki...can't wait to hear about your adventures.

Great job matching the stripes. Will velcro help to attach to each other? Ducky looks so happy all spruced up! Hope the weather improves for your trip.

How about some wide Velcro to get Ducky’s cushions to stay together?

You have done an amazing job! What a lovely little escape you have! Perfect!!

The Rule of Three has many applications.

Mitered corners ... and picked up edges in general ... are always a pain - I think three tries would be a record for me!

Ducky, however, looks like a HOME RUN on your first try! I spotted quite a few updates from the Before to the After and I am IN AWE of those matching stripes on the cushions.