I'd like to introduce you to Electa Quinney. She is recognized as Wisconsin's first public school teacher, opening a school near Grande Kawkawlin (where I live) almost 200 years ago. 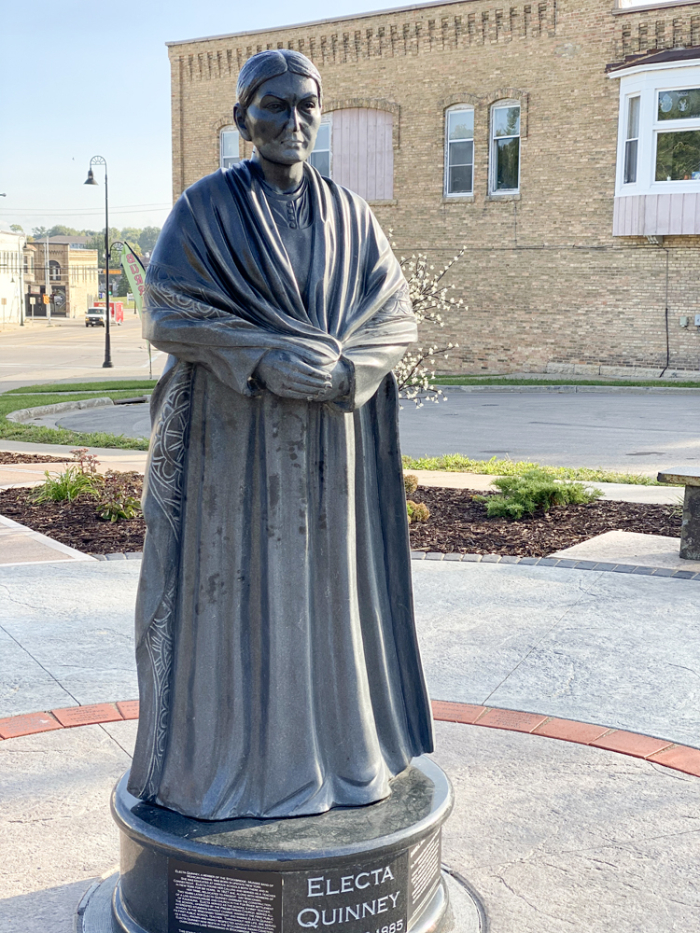 This new statue -- and the newly revitalized park over which she presides -- was dedicated last month. I was unable to attend the celebration, but that's okay... most days, I drive or walk by this park at least once. I think of her often! The cul de sac seen behind her is at the end of the street that bears her name, and one of the schools that my kids attended is also named for her. 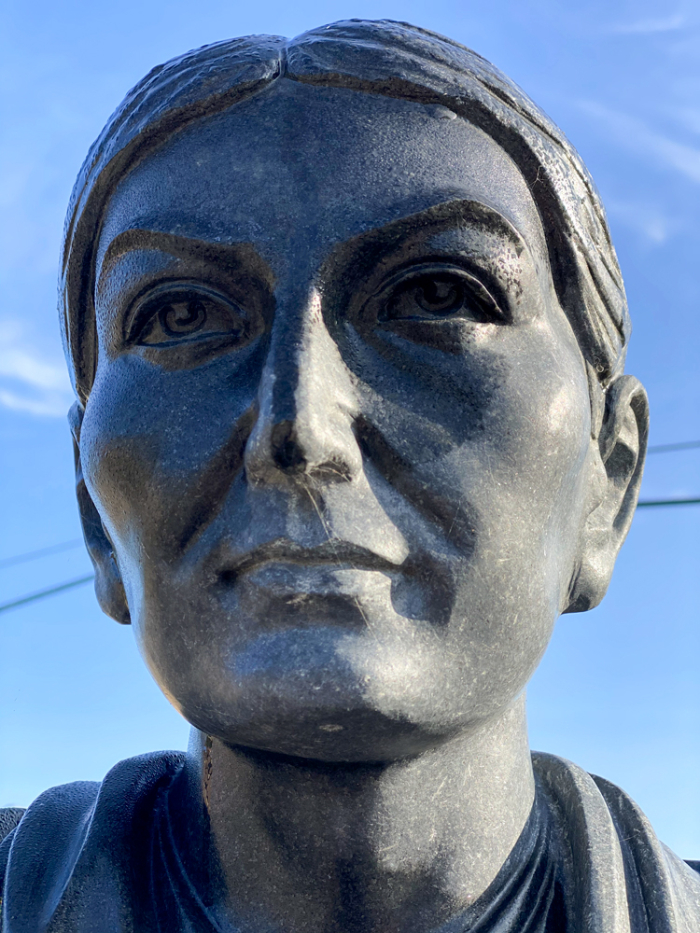 She's a big deal around here -- a Native American, a woman, an educator -- and I think it's just lovely that she's been memorialized again in such a way.

The park had been in a pretty bad state for years, and was nothing short of an eyesore all of last winter and much of the spring. Work had just begun when we had some early stormy weather, then winter suddenly arrived, and it sat -- mud, orange plastic "safety" fencing, everything torn apart but nothing put back together.

The re-do was led by our high school's Civic Engagement students, who raised money for the renovation that includes a new amphitheater (which I hope we'll be able to utilize before long). Funding was also provided by a local family foundation. It was a complete overhaul! Initially, they'd  hoped to save some mature trees in the (small) park, but they were too damaged in the storm, so new "real" trees of a couple varieties join a bunch of LED trees. Unfortunately, there is nothing picturesque about this location... except at night (when those trees light up). 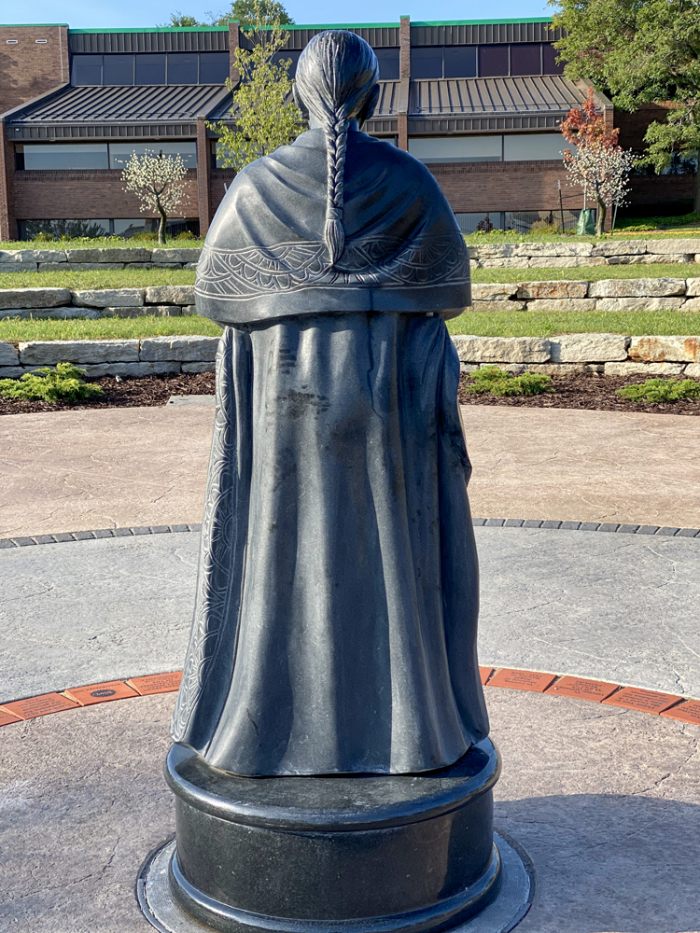 She's facing a bank in the photo above, but many years ago it was the location of South Kaukauna Dairy, founded by Hubert Fassbender, inventor of Kaukauna Klub Cheese! The park is named for him and there's another little monument there that I will share another time.

I love the detail on her shawl, and I can relate to that hair... 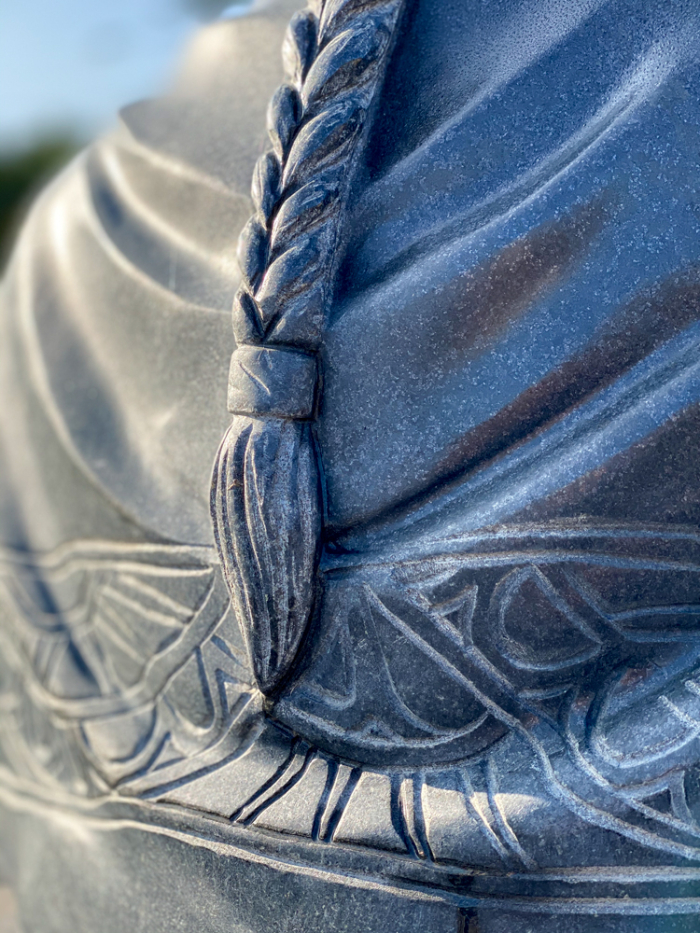 ...though mine is still too stubborn to stay braided for long.

I'm thinking that Ms. Quinney might be willing to model the next shawl I make!

This is great! I love her name and that she's been remembered and memorialized in such a wonderful way. I'm sure she would be more than happy to model your next shawl!

What a beautiful tribute -- and a fabulous statue! I can't wait to see her modeling a shawl! XO

She is wonderful Vicki! I love her shawl and braid too. I wish I could do a French Braid for my LONG hair, but it won't stay in. Maybe I'll try just a regular one - guessing that won't stay in either. Electa is such a great name too! Fun stuff.

Getting a school teacher was such a huge deal in those early days. And rightly so, that she has been long remembered. And I will refrain from getting on my soapbox about how public school teachers are currently held in regard.

How lovely! And I love the detail of her statue! (and she looks like she'd love to be a shawl model!)

This is such a lovely tribute, and I am so inspired that high school students made the difference in the renovation! I think she will be an excellent model for shawls (not to mention an excellent role model!).

That's a great statue and I liked the history lesson you gave us, too. I definitely think she'd be a great knitwear model!

I was going to say I bet that shawl is either knit or woven!! Gorgeous memorial to a wonderful educator!
Hopefully when weather permits (April?-May?) the renos on the park will resume! Love reading you every day! Pictures of the wee one the other day were fab!

As soon as I saw that beautiful statue I thought she was Native American-how did she manage to become a teacher 200 yrs. ago? The park will be honored by all who use it and so will the students that help make it possible. I have french braided hair and found that a gentle mist of hair spray helps hold the hair together as you braid. Looking forward to Electa modeling your shawl.