Did I tell you about my Biden-Harris signs?

A few days after my across-the-street neighbor's disgusting political sign went missing, the TWO Biden-Harris signs in my yard were also stolen. So I put up another one, adorned with little flags, and with a message about an extra donation if it's stolen. 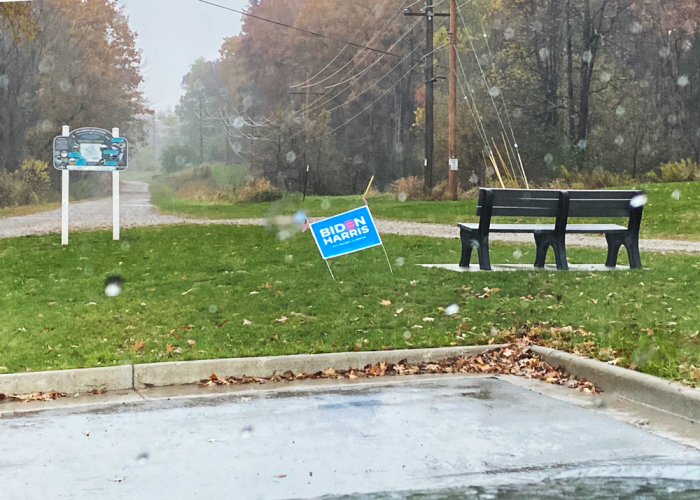 I had another in reserve, so did the same thing (with added "DO NOT STEAL" and "PRIVATE PROPERTY" messages), and put it down on the very eastern edge of our property (very, very far right and out of view in the photo above). It's wooded and down a hill, so I can't see it from the house, but it has GREAT visibility from a busy intersection and recreational trail.

One day, I decided to "take the long way" home and check on my sign. I was just starting to build up some steam because it wasn't where I put it... and then I noticed that SOMEONE HAD MOVED IT! Not only did they move it, they moved it FRONT & CENTER... unfortunately, that's public property and I knew that wasn't right, so I moved it back.

A few days later, I took the long way home again, and the same or maybe even another determined person HAD MOVED IT AGAIN! I just laughed... pulled in to take the photo above, and left it there.

Naturally, it was gone after another day or two... possibly even removed by the police. I'm sure a lot of people saw it, though, and for that I'm glad. And an extra donation was made to the Biden-Harris campaign!

Here's hoping for a Big Blue Wave to wash over us all!

I love that someone moved the sign (twice) and your extra donation! Keep breathing and hoping!

Blue wave for the win! And clean air and fairness and equality and the list goes on.

Waiting on the blue!!