Our house is 135 years old and, as you might imagine, there've been changes over the years.

This photo is from a booklet published by the Chamber of Commerce in the early 1910s, taken from the east. I would kill to have that wrap-around porch and all that gingerbread again! The upstairs sleeping porch is now enclosed (but still mostly screens & windows) and is the entry to the apartment. The kitchen, in the back, was only one story, but was replaced with a 2-story addition in the 1930s, which gave us most of the upstairs apartment.

I would love to see what it all looked like in/from the back at that time.

This photo is from 1977, taken more from the west, and was found on the Wisconsin Historical Society website, documenting local architecture. 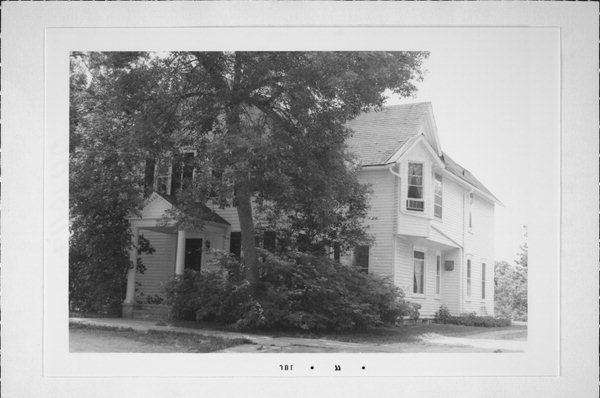 All white (or very nearly so)! With black shutters! Other than paint, elimination of the shutters, and landscaping, not much has changed from this angle. 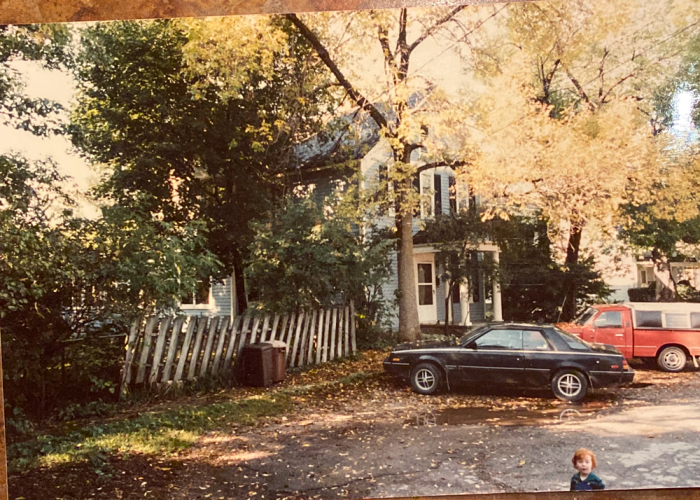 That's a wee Kate at bottom right! We had renters then, but a few years later we opened the door at the top of the stairs and took over the whole house for quite a few years while the kids grew up.

A lot has changed on this side of the house, and some has even changed back! Beyond the fence, right above the trash cans, you can see a big ol' maple tree that was growing right next to the house... like right.next.to.the.house! Why in the world it was left to grow is beyond me... but that came out. There's also a bushy-tree on this side of the front porch that I remember now would get tent caterpillars REAL BAD. Ugh! They were so gross... so that wasn't long for this world, either. The main thing, though (and it took a few years), was the addition of the garage on this side.

We're getting used to another monumental change right now. 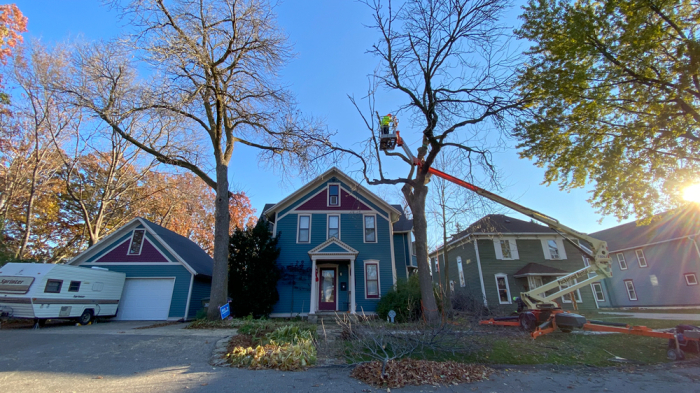 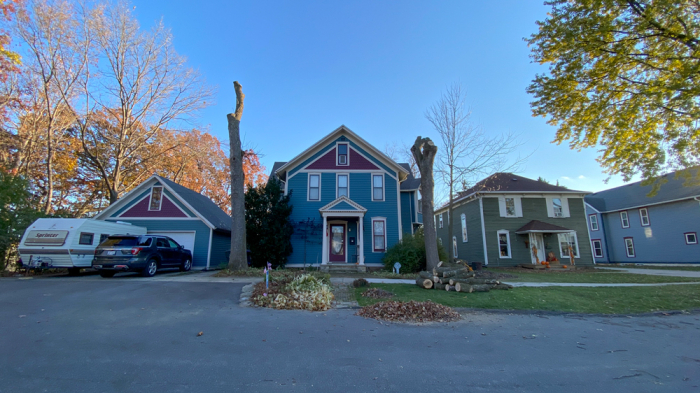 We've known the days were numbered for those two ash trees since we moved in... and it's way past the "due date." The streets & sidewalks in our neighborhood will be completely re-done within the next few years and, even without the dreaded ash borer, they'd never survive that. Most of the other mature trees on our street are on the terrace and will be taken down by the City when the time comes, but ours are firmly rooted on our property, so we're responsible. 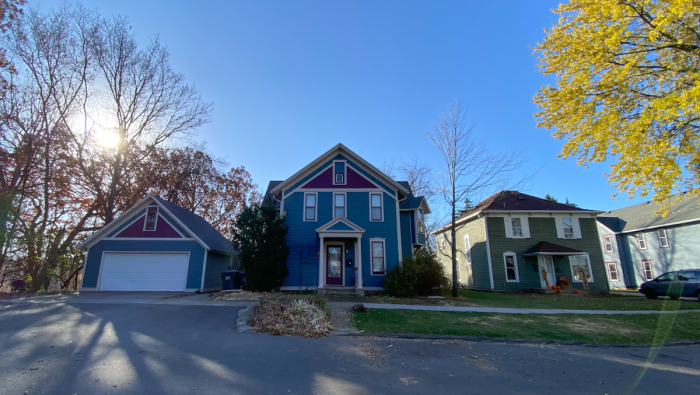 The trunks came down just as I got home from work on Tuesday. I took this pic as we headed out on Wednesday morning. 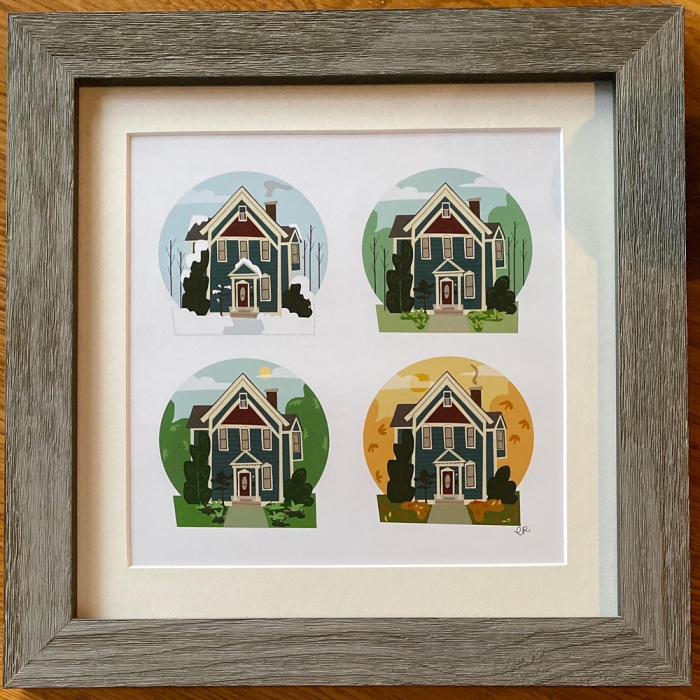 And now it looks a lot more like our "Little House" illustration. It'll take a while to get used to it, but we're already thinking up some landscaping ideas. And I won't miss worrying about branches coming down in a storm.

The kids are happy with a little extra firewood in the shed! 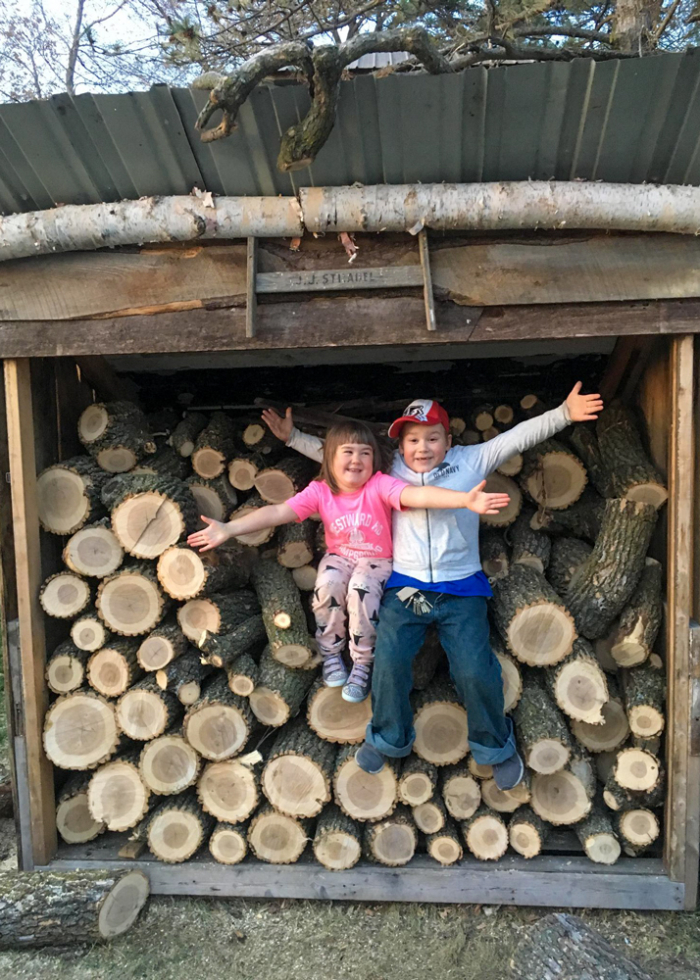 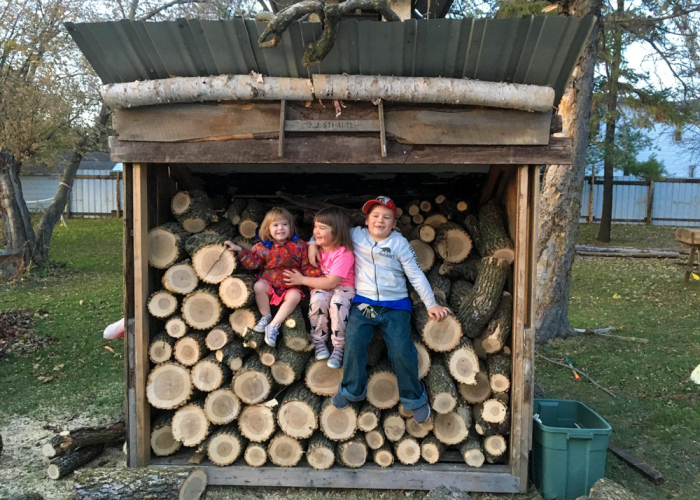 Also, I'll have a much better view when the International Space Station flies over!

It's a bit sad to have to cut down mature trees but when there are ash borers it's not much of a choice. I'm glad you can see all the silver linings!

How lovely to have historical pictures of your home. The tree removal while sad has opened your house to the sunshine!

i love your home! i love older houses and would really love to own one. i used to dream of buying old falling down homes and restoring them to their original glory. i hate seeing big old trees coming down. it makes me cry every time.
love, kisses & magical wishes...
~*~

It's wonderful to see the different iterations of your home over the years! It's always hard to lose big old trees but sometimes it has to be done.

How amazing to live in a house with so much history! Our house is almost 90 years old, but the only old photo we've seen of it is when a woman who grew up in it was visiting our town again and came to visit the house and show us some of our photos. It's always sad to see trees come down, but it's also part of life, and I'm glad that you're at least going to make good use of the wood.

Oh I just love stories about older homes! So much history and change. Sad to see the ash trees in our area succumb to the ash borer. We have one in front of our house that needs to come down.