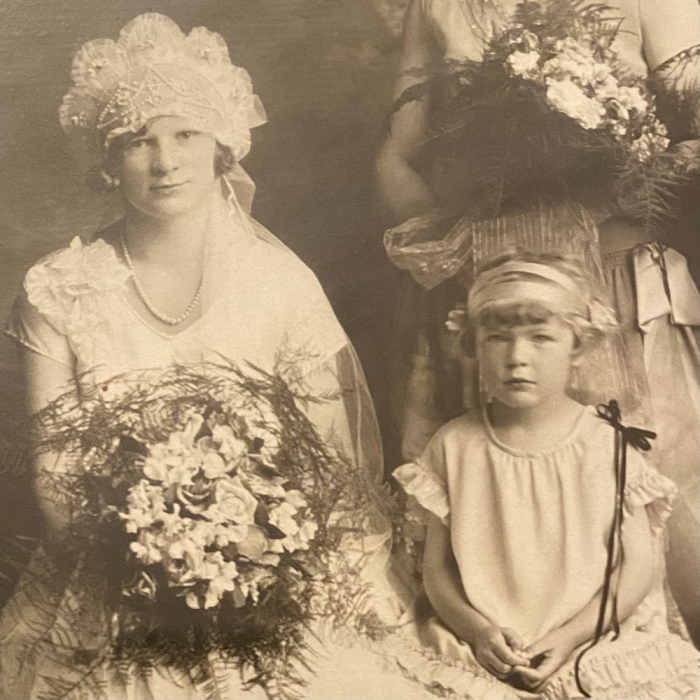 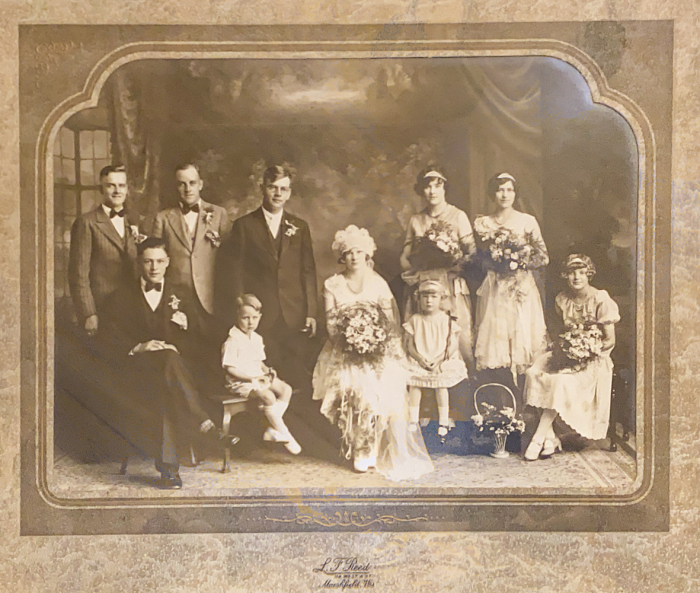 Loretta had just turned five -- as had the little ringbearer who was my grandfather's nephew -- and the wedding must have been so exciting for her! (The two men standing are my grandpa's brothers, the seated gent is my grandma's brother, the seated girl is grandpa's youngest sister, and the woman standing behind Loretta was my great aunt by both birth and marriage -- my grandma's cousin, she married my grandpa's brother -- the one to his right -- a few years later. The other woman is unidentified, "maybe a cousin.")
/familyhistory

I have so many fond memories of visiting the farm that Aunt Loretta & Uncle Al owned -- they were our only farmer relatives, so it was always novel to us, even getting zapped by the electric fence and stepping in cow pies. Sometimes there was a bull in the barn, and always kittens! Loretta & Al (who died 10 years ago this month) had seven children: four older than me (a couple by not too much), one who died in infancy the year that I was born, and two younger than me! I was sad that none of them spoke at the service, but I did catch a glimpse of a couple.

Oh wow! What a life - 96 years!! I just love that wedding picture. I'm sorry for your loss Vicki.

Thank you for sharing the photo and your memories of Loretta. I'm sorry for your loss, it sounds like she had a pretty amazing life.

That photo is really amazing! It sounds like Loretta had a really fascinating life -- we should all hope to see as much as she did! I'm sorry for your loss and hope you have many happy memories of her to help you through this time.

Your photos and your memories are so precious. Your family had many amazingly talented women and you and yours have carried on in the same vein.