I had a couple of kiddos at my house for almost 24 hours and I didn't take a single photo of them. With apologies to Kym, that's unprecedented!

I did take a few photos of some knit Christmas trees. Here's one: 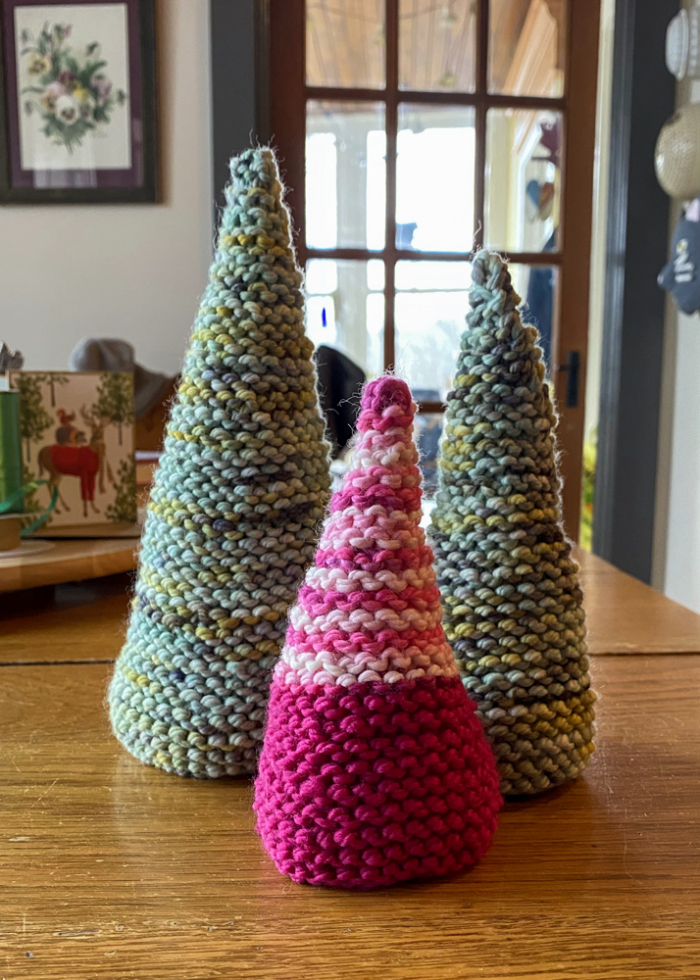 And since that photo was taken, the "forest" has grown by one! Kate laughed about how she hasn't seen me knit a single stitch on one, they're just "magically appearing." Ginny was playing with them as if they were dolls -- family, actually. The green ones were Mommy & Daddy, this pink one was Ginny, and the other one (a bit smaller, variegated pink & blue) was Malina... there was a request to "make" Junah & Davy ("with a 'bubba'," she laughed). I will certainly do so... they're fun & super quick to knit!

The pattern is Holiday Trees, available at WEBS. I'm knitting mine in Malabrigo Chunky, leftovers from some of Kate's recent projects. I'm not stuffing them in any way, they are sturdy enough to stand on their own, plus I really like the "Suess-y-ness," though I might get styrofoam forms for a couple -- as I was demonstrating/stretching, I really liked how it looked with the garter ridges spread apart.

(Kate, by the way, is knitting up a storm... four or five cowls in recent weeks, and now she's making the headbands that Kym posted the other day.)

I took delivery of some yarn over the weekend, so I'm back to knitting houses. 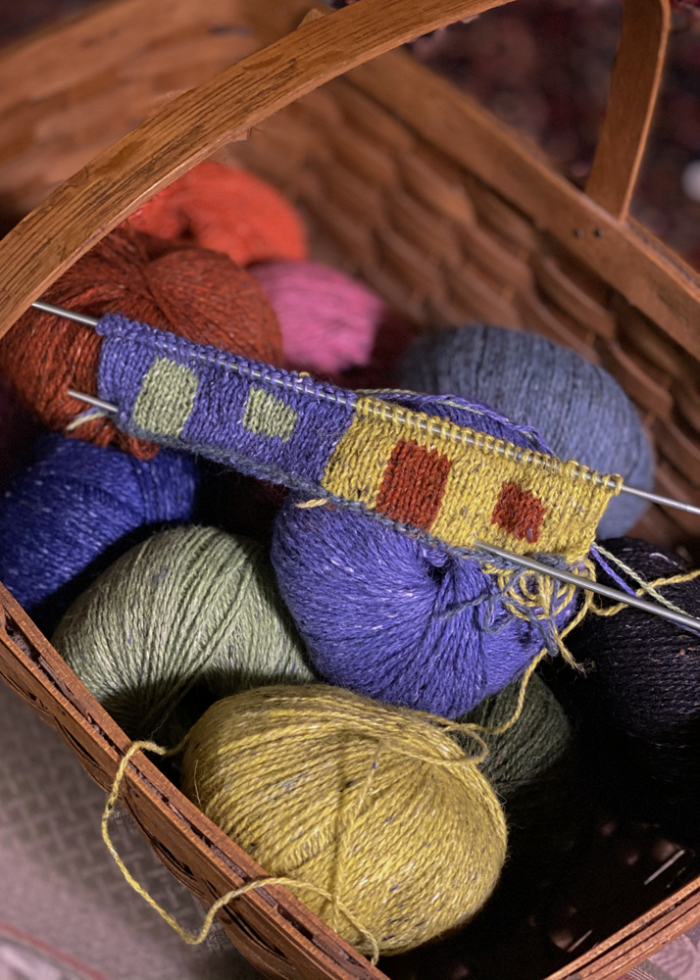 Turns out, I wasn't happy with my previous start, so ripped that all out (hence the tree-knitting while awaiting deliveries). This is the "Village" design from MDK Field Guide N0 16: Painterly again, this time in the Rowan Felted Tweed specified in the pattern. Oh my, it's been ages since I knit with Rowan... it is very nice yarn. Heh.

Junah negotiating with his sister on Saturday night about what movie to watch:

“...but Ginny, I’ve been wanting to watch that for years!”

"For years!" OMG I love it!!! XO
And I'm digging around in my stash from some Trees With Seuss-y-Ness TODAY!!!!

I sure love those trees! I've been knitting a lot lately, too. It's comforting.

I can't wait to get home to my stash in NJ to knit a family of Seussy trees of my own! With no photos of the kids, I think that means you were all too busy having fun.

"For Years!" - Hysterical. Those kiddos are ALL characters...and fun ones. Love your little Seussy trees. When I'm done the headband and mitts and maybe another pair of socks, I may try to make some mini mittens as ornaments to go on packages. But, we will see.....

For.years. I am dying. LOL

Those trees tho... to die for!

For years! Oh, the things that come out of little kids' mouths!

I'm pretty sure those trees are multiplying on their own.

Unprecedented for SURE! Glad you have good yarn-y content to share ... I'm looking forward to seeing how Painterly works up. That yarn palette is gorgeous!

Love the trees-will you add 'ornaments' (beads or baubles)?I will be knitting this weekend on gifts.