I'm joining Kat & the Unravelers today to share what I'm working on, and, because I'm a day late, I'm also joining Carole & friends for (a very loose interpretation of) Three Things on Thursday...

Knitting is on hold. I have things percolating, but nothing is moving forward at the moment. Instead... 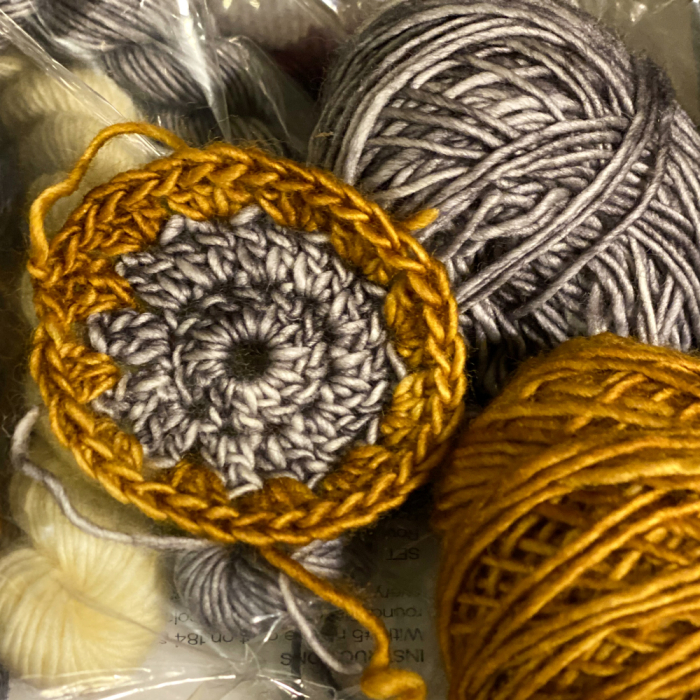 I picked up one of my crochet projects last night. Remember crochet?? Way back in JULY, while I was also working on Davy's Safe At Home Blanket, I also decided to start crocheting not one, but TWO, blanket-type projects. I even designated Saturday as "Crochet Day," which I think happened on the very next Saturday and then never again. Heh.

I plucked two yarn balls from the basket and reacquainted myself with the process, making some of the same mistakes again! It's all about practice! This is Hexie Love Actually, and I think it's going to be random, but with some "rules"... which I've yet to figure out. And, since I'm the one making the rules, I probably won't use ALL the colors I have of this yarn as originally (loosely) planned... the neons do not bring joy for this project. (I think they might make an awesome something for the kiddos... maybe some trippin' gnomes!)

I still have a few hours of listening to HAMNET, and I'm on the edge of my seat. I am also reading AN AMERICAN QUILT: UNFOLDING A STORY OF FAMILY & SLAVERY. I don't remember where I heard about that book, but it's an interesting historical non-fiction story that truly "unfolds" through the discovery of an unfinished quilt. At the risk of sounding juvenile, I like that there are lots of pictures!

When I patched the left elbow in this favorite sweater, I wove the patch directly into/onto the sweater... you can see that process here.

For the right elbow, I picked up and knit a stockinette patch, which I then sewed down on the other three sides. 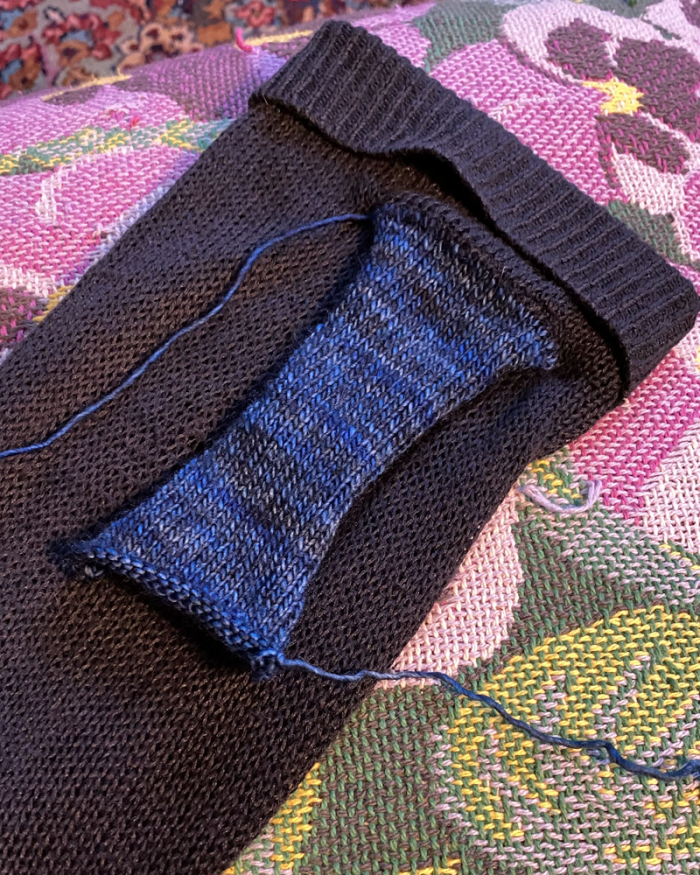 In hindsight, it would have been nice to do some increases along one side of the patch to better "fit" the shape of the sleeve... but it's a patch on a holey old sweater that is in need of some other repairs, likely soon relegated to "house sweater," though I am going to get some public wear out of it yet! 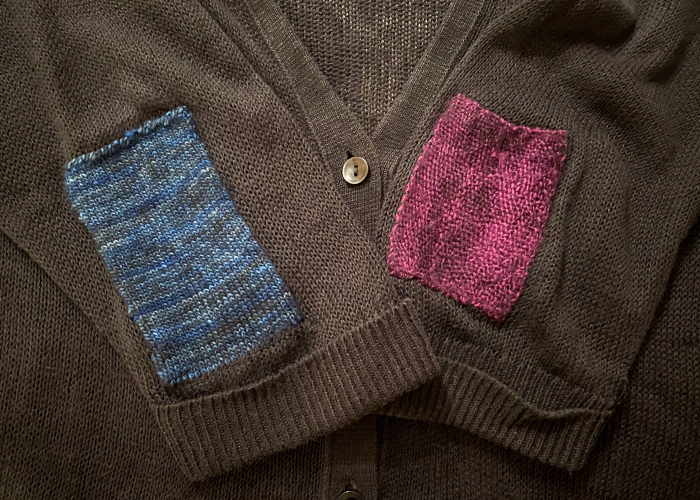 Though the hole was smaller, the new patch is quite a bit bigger than the first -- there was a lot of "thinning" happening! 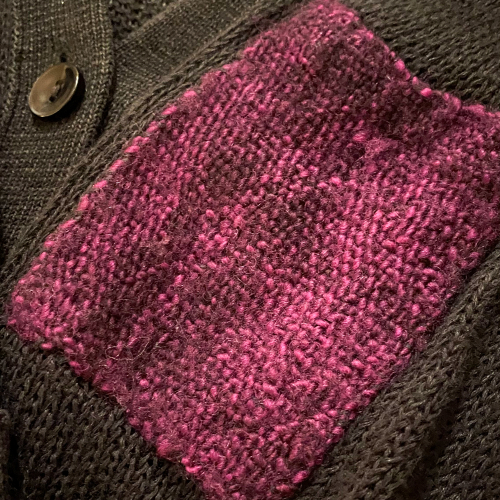 A close-up of the first patch. I'm happy with how it's held up. Both of these were worked in Madelinetosh Unicorn Tails.

Kate had a dentist appointment a few days ago that involved novocaine and she sent a hilarious Snapchat to all of us, which, as often happens, started a flood of Snaps amongst us. 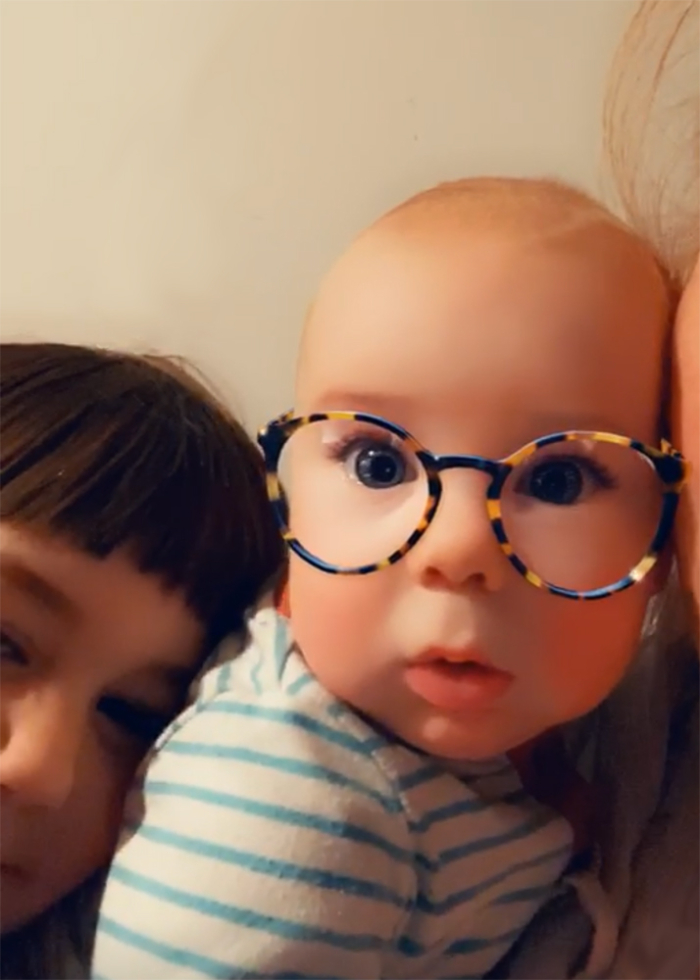 I had to grab a screenshot along the way!

And this morning, Ali sent a few photos, including this: If that is not a doting big sister... and her little brother who is fully aware that he is Living The Life... I don't know what is.

P.S. Ginny is wearing a pair of Hannah Andersson PJs worn by both her mother and her Aunt Maddy, and still going strong! Quality FTW.

Ginny is more adept at a baby sling than I ever was!

Hannah Andersson was a huge favorite here when my Hannah was small.

I think your patches are awesome! And I love that Saturdays were for crochet exactly one time. Sounds like something I would do, too. Davey is certainly living his best life right there.

There's that sweet girl being a little Momma again! Isn't she just incredible....and that smile...!
Can't get enough:)

Gin! Every time I see her I have to smile. She is just like a little Mother and Davy is living the best life ever for sure (and he still looks JUST LIKE Jun). Hmmm, I started doing crochet Granny Squares early on in the pandemic and got a bunch done and then promptly forgot about them (even though they are in plain sight in my office - LOL). Love your patches. My Katrinkles Loom came the other day and I need to patch Colin's socks before we see him Sunday for dinner!

I went down a little hexi-crochet hole on Instagram this morning thank-you-very-much :-) can't wait to see how it comes together. and love the snapchats ... it looks like Davy is going to be as big as Ginny soon!

Too cute those kiddos! (and yes for the Hannah Anderson clothing. My grands are wearing things their mom/uncle wore when they were little!)

Your mending is brilliant!

Love the pix of the grands!! I was intrigues about the book so I got a downloadable MP3 from the library. It is fascinating . I've done hexies but I'm not a fan. Love your patches. Keep on patching.

I'm not sure who is happier in that last photo! And Hannajams for the win! I finally got my own pair in the fall after being jealous of my kiddo's for years (actually, we got matching ones).

That picture of Ginny and Davy is just what I needed this morning.

Okay. Ginny (and that Davy, too) has just totally MADE MY DAY! XOXO I love your mending. LOVE. I wish I had some "thin spots" that needed mending. . . (although maybe I could just pretend and slap some patches on some sweaters that could use a little whimsy????). Have a great weekend, Vicki.

Loads of wonderful things here! Your crocheting glows, I'm always glad to hear that someone is reading and loving Hamnet, and your grands are THE BEST! (Would you like me to send you some more sweaters to mend?)

That crochet project and those patches are awesome! I love the color combo you used with both efforts. f