For my birthday, Ann wanted to do some sort of online cooking class together, and we finally found something that would work!

We're going to learn to make Pisco Sour -- the national cocktail of Peru -- from Franco, an award-winning mixologist in Lima. The price includes a kit, delivered by courier, with everything you need... unless you live in Wisconsin, and then you're on your own... and hopeful that you can even find pisco! Haha. Some gift, huh?

Well, a hunting I did go, and I found some! I was advised to look for Peruvian pisco, not Argentinian (they're different), and there were two varieties of Peruvian at my go-to liquor store. Naturally, I bought the more expensive one because it had this cool sticker on the back that you viewed through a window on the front... I'm easily enchanted! I did a little research on the website and found that they actually have four varieties, and their Pisco Sour recipes called for a different variety. Awaiting word from Franco...

Meanwhile, Ann sent me an email from the New Orleans School of Cooking and wondered if there was a class there that I'd be interested in. She & Brian had an in-person class there a year or two ago and really liked it. We talked on Saturday and looked over the choices/calendar together and found a class for Meat Pies & Dirty Rice... on Sunday! So we signed up!

I was positively thrilled when the confirmation email triggered a notification on my TripIt app! I got a little "ding-dong" reminder -- something I haven't heard since March!

The shopping list, recipes, and instructions were sent ahead of time, so on Saturday I went shopping. On Sunday, it was all about chopping and measuring for mise en place. 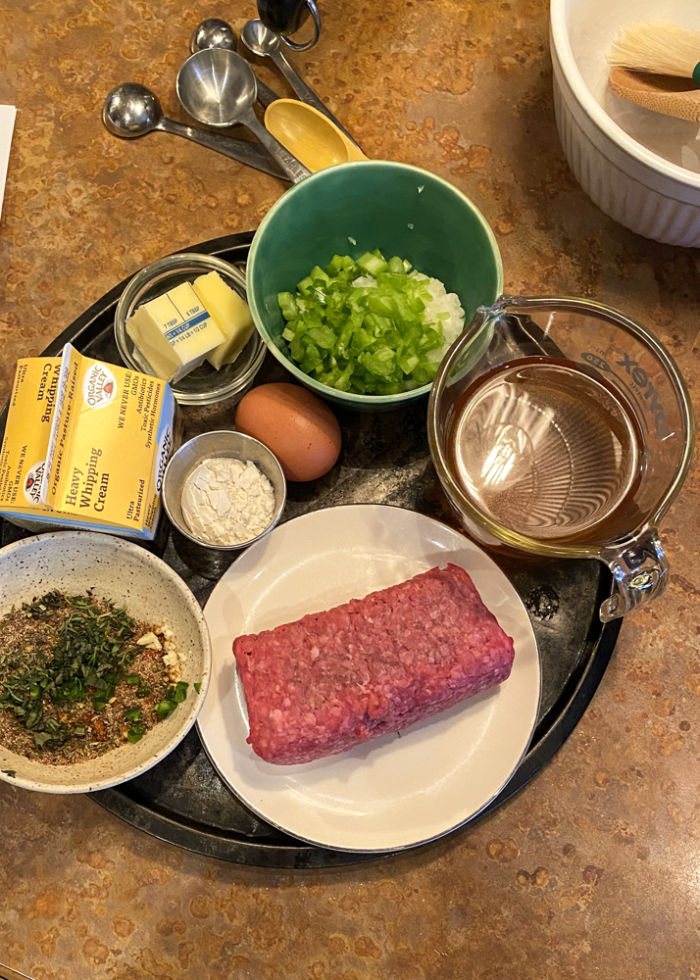 This was my set up for the Meat Pies (puff pastry sheets thawing behind me). I had another tray set up with everything for the Dirty Rice, and all the necessary skillets, pots, and bowls were handy. 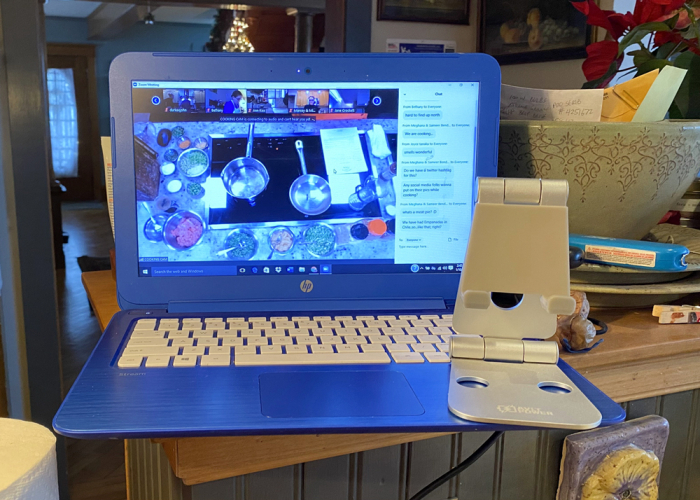 I had some technical difficulties, so had the video up on our old laptop but the audio was on my phone (also with video, though, and that was cool because I could see Annie & her set up a little better on my phone while keeping the class feed on the laptop). The last time I used that laptop was for a Zoom class to make my wreath and everything was fine... so I dunno (technology sometimes - ugh!).

The class was 1.5 hours long (we went a few minutes over), limited to 30 participants, and I think we were numbers 26 & 27, so it was pretty full. People from all over, including a group from MN who did it as a Christmas present, which was cool. The instructor was friendly, chatty, knowledgeable, and efficient. Everything was done step-by-step, she gave us options for different ingredients, methods, and presentations. 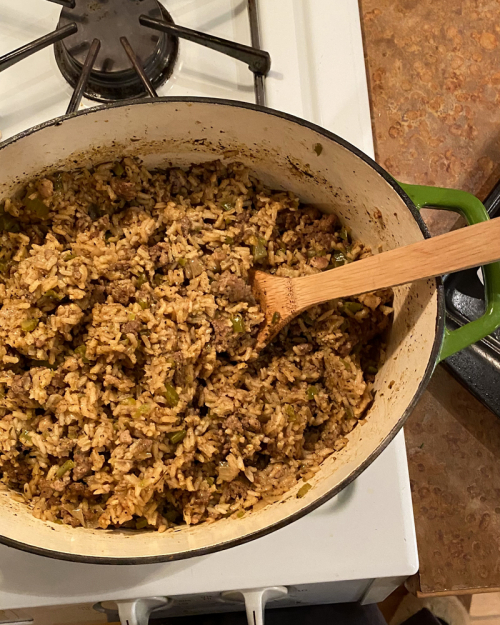 We got the Dirty Rice going first. Mine is not technically "dirty," as they didn't have chicken livers at the store so I had to sub a chicken thigh (apparently, it's the organ meat that makes it dirty). It's not very picturesque, but oh my goodness, is it tasty!! 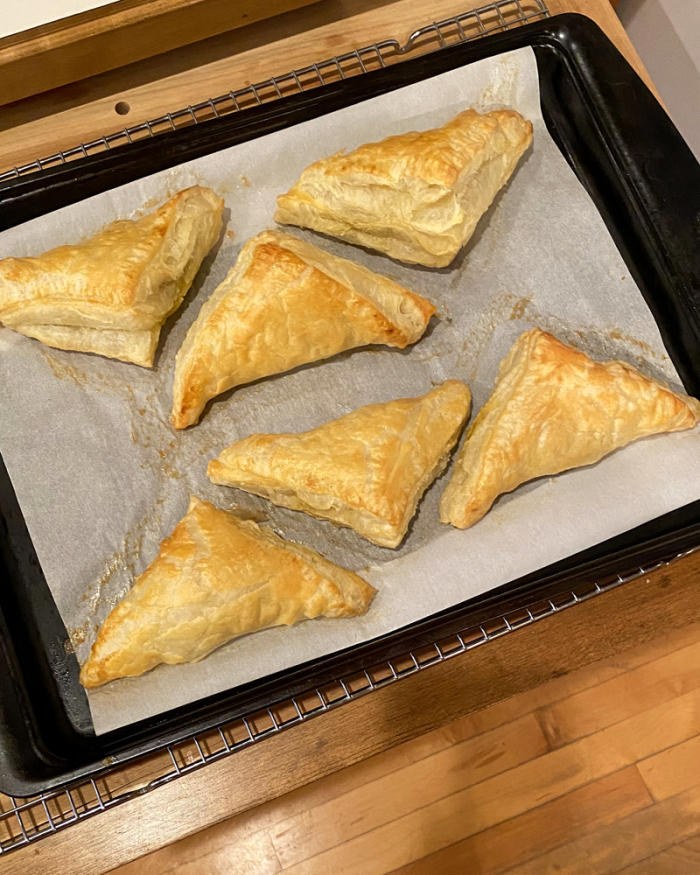 The meat pies turned out GREAT! I got a dozen out of the recipe. The class was in the afternoon, so Kate & I split a pie and had a little rice when they were super fresh. We all had same for dinner, and Rusty was warming up some rice this morning to have with an egg for breakfast. I can't wait for lunch today... guess what's on the menu!?!!

And next weekend, PISCO SOUR!

That sounds like a lot of fun and everything looks really delicious! I'm intrigued to look for something like this to do with friends.

Wonderful! I love how even though you can't travel, you've "gone to" Peru and New Orleans!

This sounds like such fun! My daughter just started a cooking elective for her Sunday School, and as all classes are online these days, they're doing the cooking at home, too. It's obviously simple stuff because it's all young-ish kids, but she apparently really loved it. They made hummus for their first meeting yesterday, something I love but have never been able to get her to eat, and she said she kind of liked it! If this is the trick to her being a less picky eater, then I think we need to do more online cooking classes!

Oh that looks like so much fun and so tasty too. Puff pastry pictures always make me want to eat it now!
I can't wait to hear about the Pisco Sours.

Super cool! I now absolutely want to find a class with my BFF. Also? Good to know you can sub a chicken thigh for the livers. I've never enjoyed dirty rice because of the livers (unfortunate childhood trauma is all I can say). Thanks for sharing this experience with us!

I'm not saying the audio problem isn't with your computer, but my friends and I find that sometimes those issues are with Zoom and logging out and back in will resolve the problem.

I love online classes these days and my friends and I play games, sometimes using an online app while Zooming on another device so we can chat while playing.

I'm jealous. Sounds like the cooking class was great. I took a zoom class recently on making Pickles, which was awesome. Too bad about the livers- I love them. Chopped liver is a favorite appetizer.
What is Pisco? I like whiskey sours, would it be similar?

What fun!! Your rice looks amazing! I wish I could smell all the smells! (and I can't wait to see the Pisco!!)

I arranged to do a paella class with a local chef for my socially distanced kids, and we had a grand time, too. It’s on my blog, including recipe. I couldn’t get my audio to come through my bluetooth headphones on Zoom, so my audio ran off my phone. And I eventually figured out that I hadn’t selected my headphones to be the receiver on the Zoom app. Oy! Learning more technology every day.