My world in black & white
Lots of stitching

I had a lovely 3-day weekend, with Monday off. It was that perfect blend of getting things done without the days disappearing in a flash. I don't know how/why that seems to happen sometimes, but it was just so great to finish a task and still have plenty of "time on the clock."

Kate took my big hint on Friday and started to take down the tree. She stopped when she got to the part where "I know certain things go in certain boxes," so I finished up on Saturday morning. 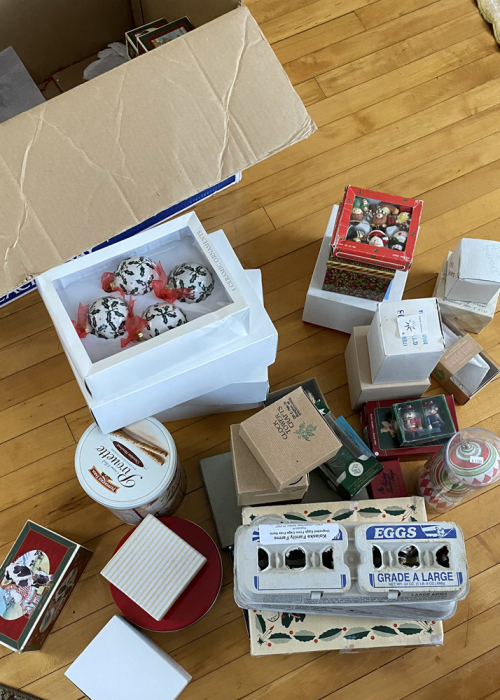 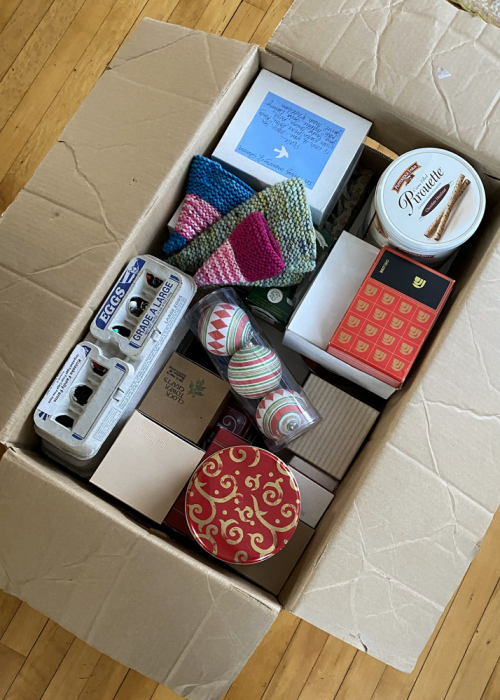 I always love the "tetris" part of the putting away! This was by far the longest I've ever had my tree up. Whew! Glad it's down, and so grateful for Kate's help.

On Saturday, Ali dropped Ginny off for a "Date with Kate" on her way to grocery shop -- which mainly consisted of Kate & Gin driving up to Green Bay to pick up an order at Michael's and a drive-thru/parking lot snack at McDonald's (such are the times), and then dropping Ginny off at home on the way back. 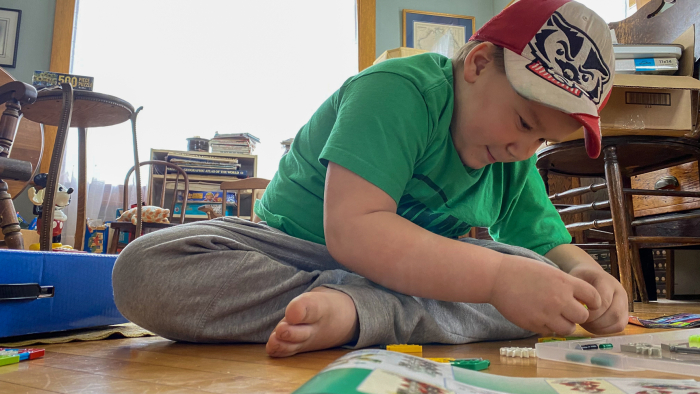 Junah happened to be with Ali, so I offered to have him stay with me while Al did her shopping. 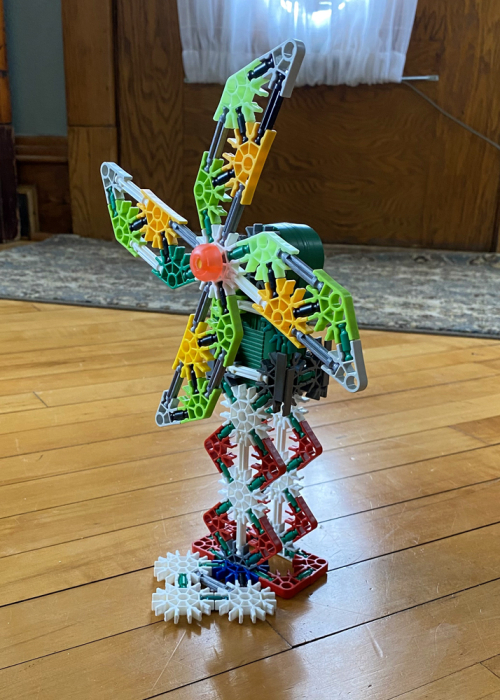 We played with K'nex -- well, he played while I was tasked to helping count out some of the pieces -- and he built a motorized fan. He was so chuffed: "Oh my god, it really is turning!"

And then we got out the train set that had been set up once or twice around the Christmas tree and he played with that for a while... with room to spread out and not worry about Malina or Ginny bumping into the track while dancing or whatever.

And then we watched a little TV: Snoopy In Space! (He just loves Charlie Brown & the gang.) He had me sit right next to him on the couch, arms linked... "This is so cozy!"

Plotz. One-on-one time is so nice! Can't wait 'til next time with a different kid.

On Sunday, we finally put up the curtain rods in The Garden Room. I had all the stuff we needed since a few weeks before Christmas and then... early holiday hoopla followed by Covid followed by no energy. I finally felt up to facing the task! 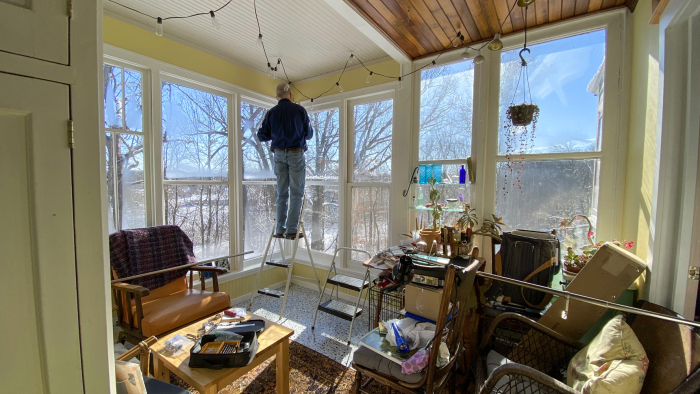 Because it's really nice to have sunshine streaming into that room, unless you're in there trying to do something while the sunshine is streaming in! Seriously, sunglasses are needed! There'll be easily arranged light-filtering curtains along the east side (to Rusty's left) and on the two large windows that he's facing. That should help a lot. Those other two windows are "original" and we've never had 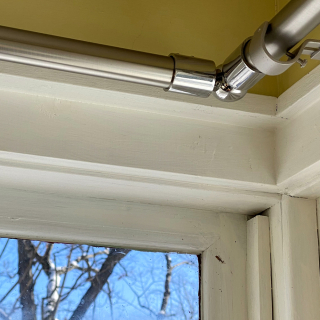 That's some specialized curtain rod hardware for the corner -- adjustable and mostly used for bay windows, I guess. I was motivated & energized enough to do a little clean up and rearranging in there!

Meanwhile, I've been stitching away on my 100 Day Project, missing only one day so far when the kids were over and I was tuckered. 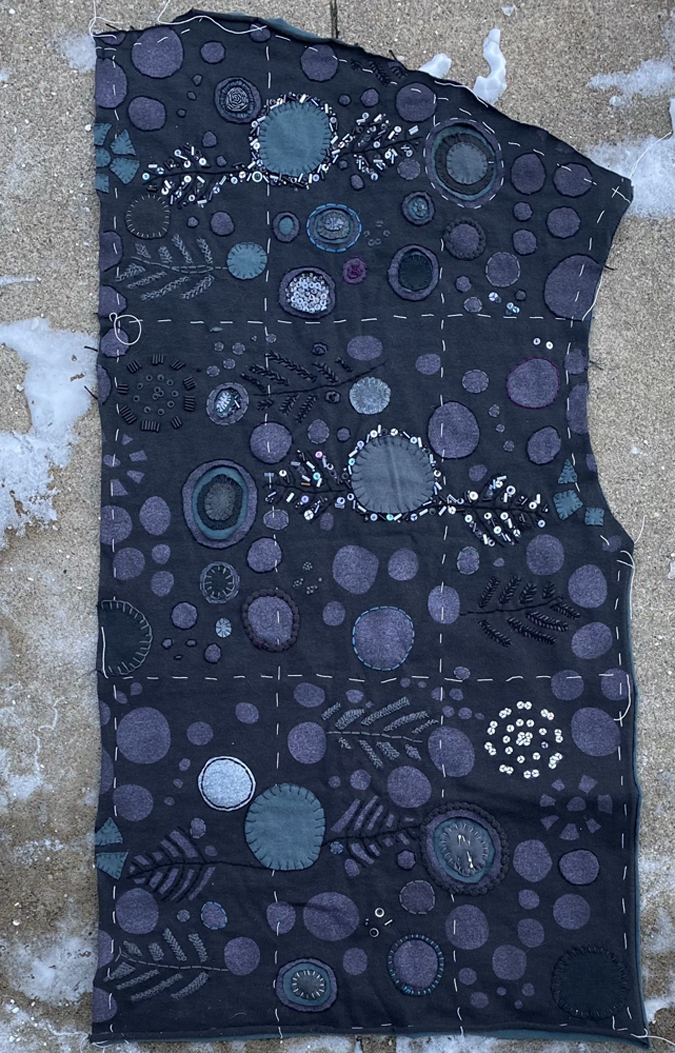 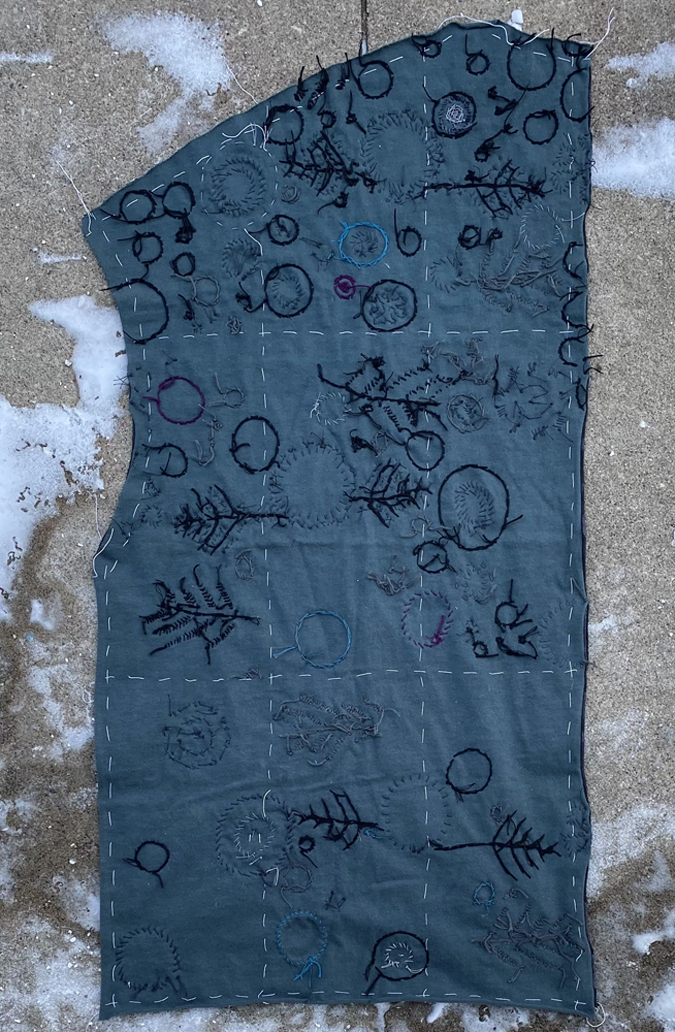 Since I took this photo on Sunday, I got a lot of beading done on the lower third. Feel like I'm getting my groove back. 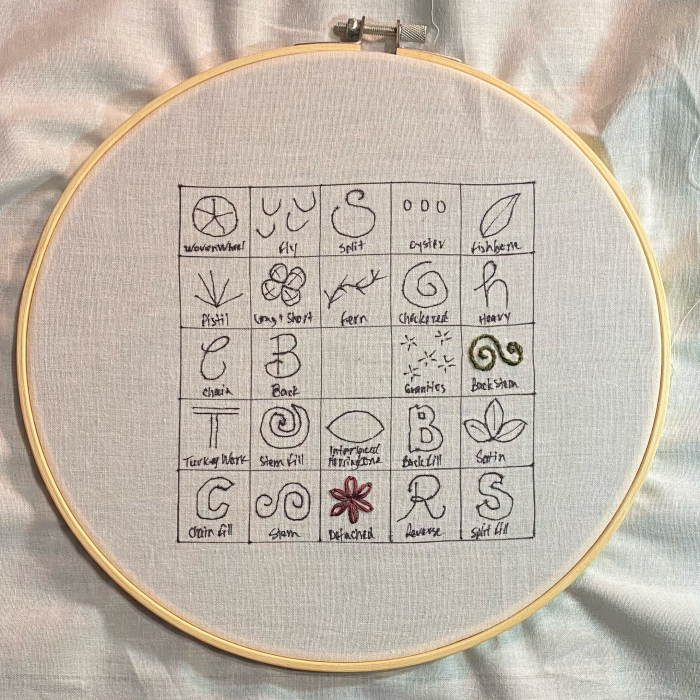 I'm also playing Embroidery Bingo on IG with Jessica Long Embroidery! Cara posted about this in her IG Stories late last week with an invitation to join her. I needed another Thing in my life like a whole in the head, but y'know... it takes no time at all and I'll learn some things! I have no idea how to do Turkey Work or Oyster stitch, for starters. Bingo started on Monday and today is the first day that my stitch wasn't called.

Thought I'd show you the layout from the Granny Squares Color Pattern Generator, which of course I also learned about from Cara! 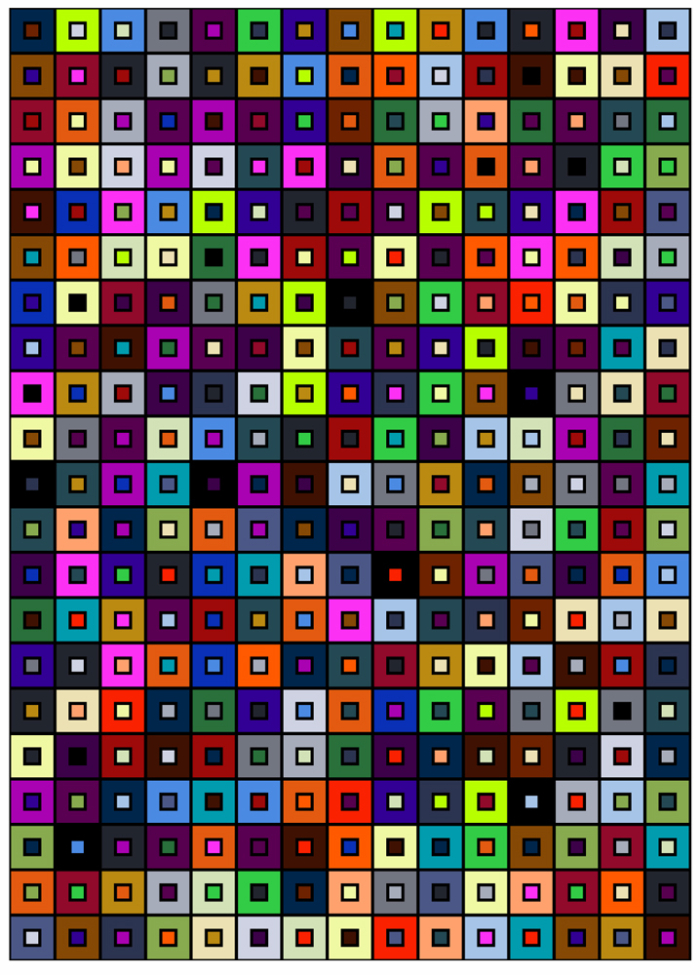 I'm making hexies instead of squares, and they're all bordered in off-white, so I just had it generate a 2-color layout using 35 colors. Oh boy! It's crazy, scary, intimidating... and I LOVE IT!!!

Dang it! That random color generator is so cool I'm almost tempted to try to learn to crochet for the eighth time. One on one time with little people is the best. Actually, I think it is for them too as they get to share and ask questions of you uninterrupted. Crochet.....? Maybe I can find a fun way to wiggle that into my quilting instead. So much more likely to happen.

I love that Junah is the perfect age to build complicated K'nex structures and still snuggle with you on the couch! I'm enjoying your AC beading and all your other multi-craftual pursuits!

So many good things in this post! I know you definitely feel a need for the curtains, but every time you post a photo of that room I think what a good antidote it must be for seasonal affective disorder.

Isn't it great when your grandkids live close enough that they can just hang out for a while and then go home? I love that you and Junah had some one on one time together. That random color generator looks very cool!

The "certain things go in certain boxes" thing flew out the window the first year my children took it upon themselves to undecorate the tree. It sort of makes this exciting each year, though, not knowing what you're going to find where!

Love that colour generator!! Isn't one/one time with the grands the best?? They just seem to be so much themselves without the annoyance or interruption of their siblings..
Love your chicken/goose/duck window with plants....!

What a great time with Junah-he won't want that in a few years. The curtain rods look hi=tech. I could use some light filtering curtains in my sewing/computer room. In the afternoon I wear a ball cap to shield my eyes. Your vest is looking wonderful. Enjoy your creative time with all your projects.

Arm in arm on the couch! So great. I've got a porch that needs some sun diversion but am slow going as I love the heat!

There is a whole LOT packed into your post, Vicki! It's hard to keep up with all the energy and action! I love it all . . . from the Date with Kate to the shared K'nex build with bonus cozy-TV-time . . . to the project updates . . . to your incredible garden room. (I would be tempted to camp out permanently in your garden room. . . ) When I first saw your stitching-bingo card, I was tempted to join in, too. (I even read all about it.) But my craft room reorganization is in Such A State right now that I wouldn't even be able to locate my embroidery materials if I wanted to. So maybe next year??? Thanks for the great update! XO

gosh, Vicki - so much good stuff going on in your world! I'm so happy to see evidence of SUN (and I'm sure you enjoyed it, too!) ... and I am totally enjoying your 100-day project. You are actually making the whole embellishing process look like fun (not work)!

I love seeing all that embroidery! That sampler looks like so much fun (and so many stitches I have no clue about!!)

What a light-filled post! That Garden Room!!!! I love seeing all your projects and of course hearing about family time. Jun is getting SO BIG!!!