Let's catch up
The week got away...

Embroidery Bingo is genius! It's so fun & quick to do... and it's contagious! Kate decided to join in, and I just happened to already have another "card" drawn up that she could use; she just had to draw in the stitches that she wanted to do. 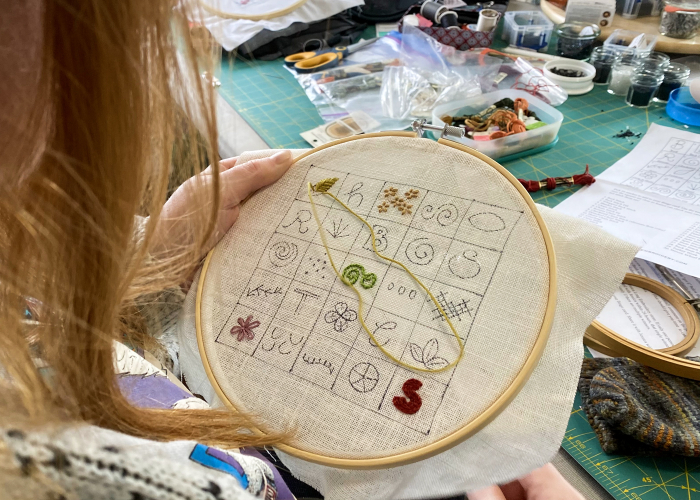 Here she's working on the "fishbone" stitch, and she's done a lot more since then (Saturday) -- a few more stitches, some extracurriculars on the side, and borders! The girls used to watch me cross stitch back in the day, always wanting to "sew," too, so she's no stranger to any of this.

Here's my card as of Saturday. I didn't have either of the stitches called yesterday or today, so it hasn't changed. 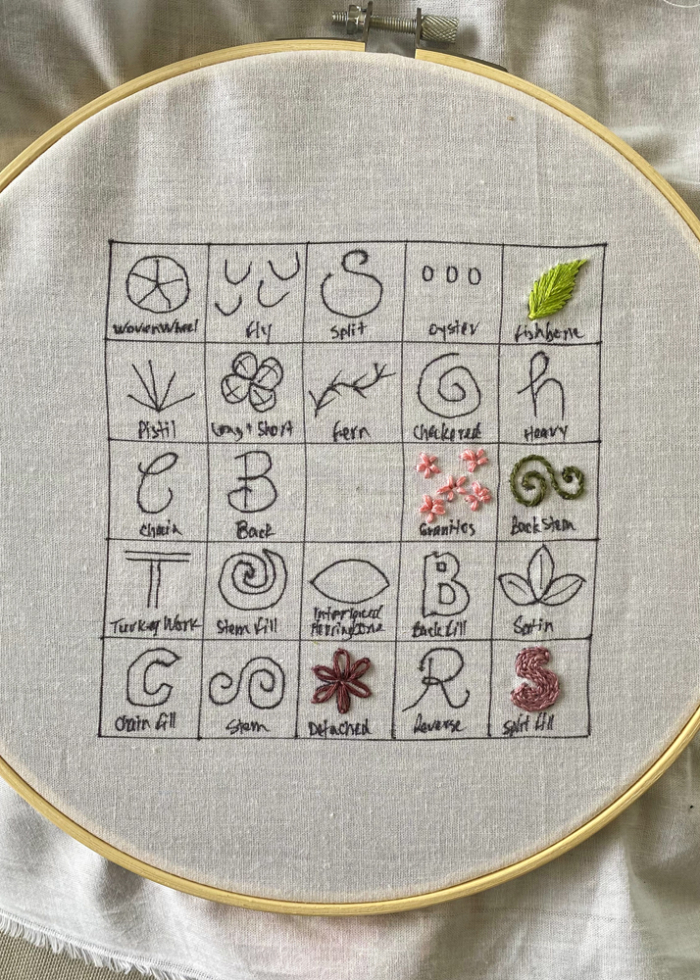 I needed to choose 24 out of 30 available stitches for my card, and deliberately chose ones that were less known or unfamiliar to me. I'd never even heard of fishbone before and it is so cool! I hope to find a few stitches that I can incorporate into my Alabama Chanin project(s). In my stead, Rusty went to an estate sale on Friday; the combined estate of our friend Margaret, who died a few years ago, and her sister Florence who died a couple of months ago. Florence was 96 and spent all but her last few days in their home -- the home that they grew up in! Margaret was an artist, which is how we all became acquainted, but she also worked with needles of various types over the years, and we forged an additional bond in over knitting. Some time ago, she gave me some of her spectacular Vogue Knitting Magazines from the 50s & 60s. 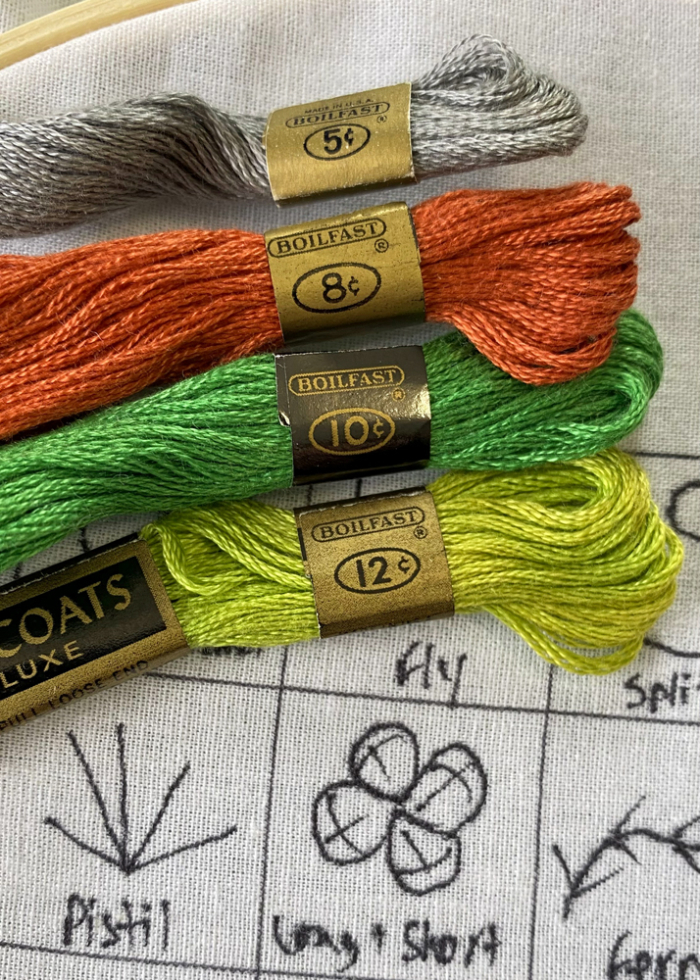 I'd hoped that perhaps there'd be some more of that type of thing at the sale, and some knitting needles, but there weren't, and the yarn wasn't anything I was interested in. There was a bag full of embroidery stuff, though, so I asked Rusty to bring that home. There were a few projects underway, and lots of floss. I was amused at the range of prices I found on the floss bands; today a skein of that floss sells for around 45¢. Anyway, I used some of their floss for my fishbone stitch, and I'm sure I'll use more.

I did a bit of beading over the weekend and some more applique on my Car Jacket. 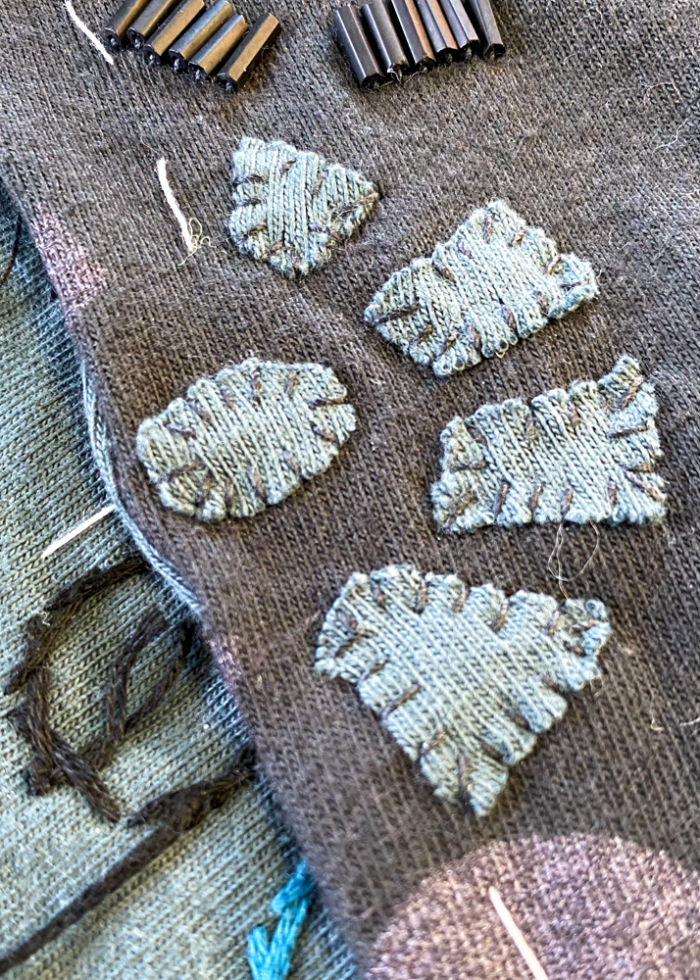 And I've been following my granny square layout to do crochet. I had done a lot of willy-nilly circles, but now I'm following a plan and will soon have enough to join together the first row!

That embroidery bingo is pretty clever and it's even nicer now that you have a stitching partner! (I love those floss labels!)

It's a treat to have different types of creative projects on the go. Don't feel like one? No problem, do something else. I think it's probably better for us physically to switch things up from time to time, too.

I have been watching embroidery bingo, what fun! I wish I had started that! (but I have been eyeing a bargello sampler at Churchmouse Yarn...)

I love the embroidery bingo concept! Did you create your bingo card freehand? It's remarkable!

whoa. lots of stitching indeed! I'm totally enamored of your free-style creativity with the car coat embellishments and cheering everyone on for an embroidery BINGO!

Oh that stitching project looks like so much fun! I've never stitched...a stitch! :-) I just finished a baby blanket with some yarn a friend had given me from her Mom and it was $1.49 a skein!

That looks like a lot of fun. Somewhere...in the mess I have...are embroidery flosses that were my Mom's for similar prices!!

Back in the early 70's a dry goods store in town was going out of business and my friend and I went in to see. They had floss for $.02 a skein. We each bought 50 skeins. Later I used a multicolored to embroider a table topper and was running out. The multicolors for sale I could find weren't the same set of colors. Aha...contacted my friend. She still had her skein of that particular floss. :)