Yesterday, we masked up... 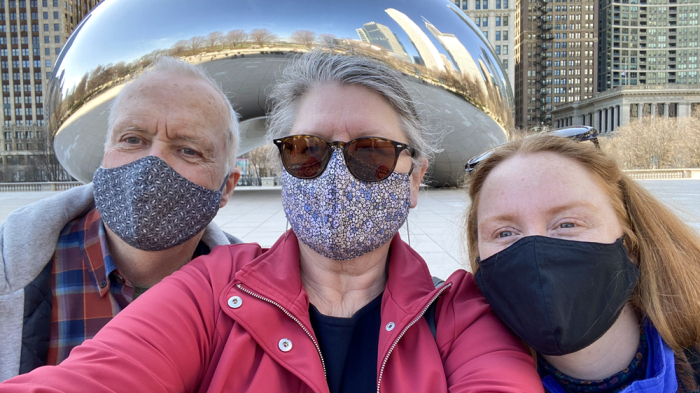 ...and headed down to Chicago! There's a busy month ahead before Kate heads to Scotland, and we've begun crossing a few "do before departure" things off the list.

When I recently read that The Purple Pig was opening their dining room again (at 50% capacity), the deal was sealed. I've had Bisa Butler: Portraits at The Art Institute of Chicago on my list for a while, and we got Monet and Chicago as a bonus! At first, we talked about a quick overnight trip, but instead decided on an even quicker day-trip, and on a weekday in order to avoid crowds as much as possible.

We timed our arrival to coincide with the restaurant's open and had a great lunch. It was my first time to The Purple Pig since they moved (almost two years ago!) into a larger space. We'd been visiting the old location (practically next door) on nearly every visit to Chicago since we discovered it, so I was happy to return! 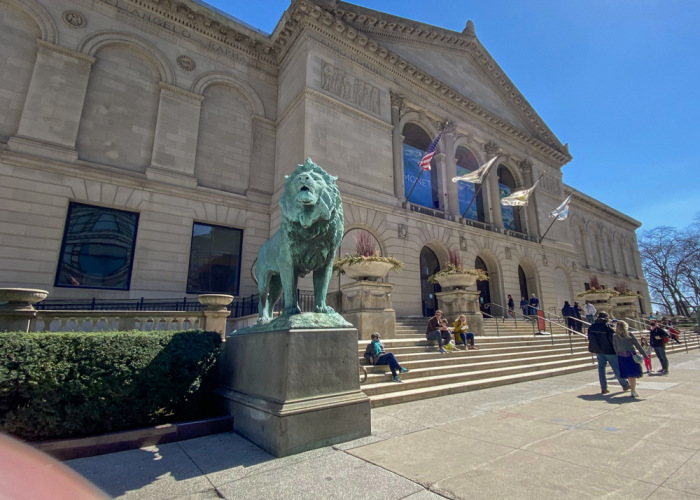 From there, we walked down to the AIC, where we flashed our digital tickets, which I'd purchased in advance, including the special ticket required for Monet. Upon entry, we could join a "virtual waiting list" for the special/popular exhibits, including Bisa Butler, as the museum was limiting the number of people allowed in each at any given time. We received text updates and finally a notification that we were at the head of the line!

The Monet exhibit was great... I learned a lot about his history with Chicago and collectors there, and I took a few photos.

Bisa Butler: Portraits did it for me, though. It was absolutely stunning... 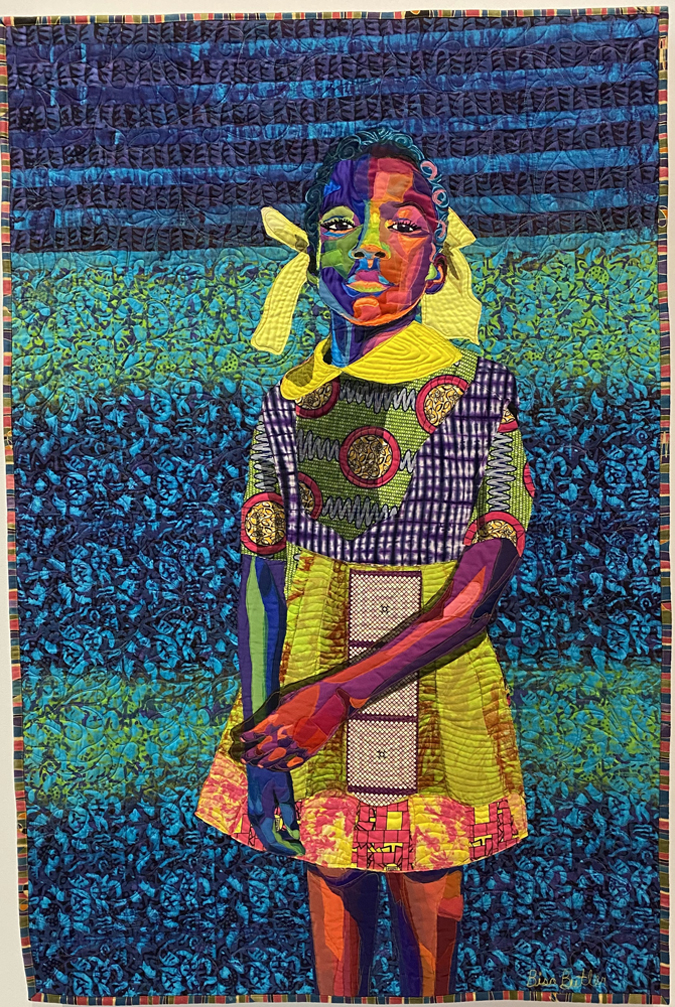 The exhibit runs until early September, and I think I'm going to have to return. There is just so much to see in every piece! 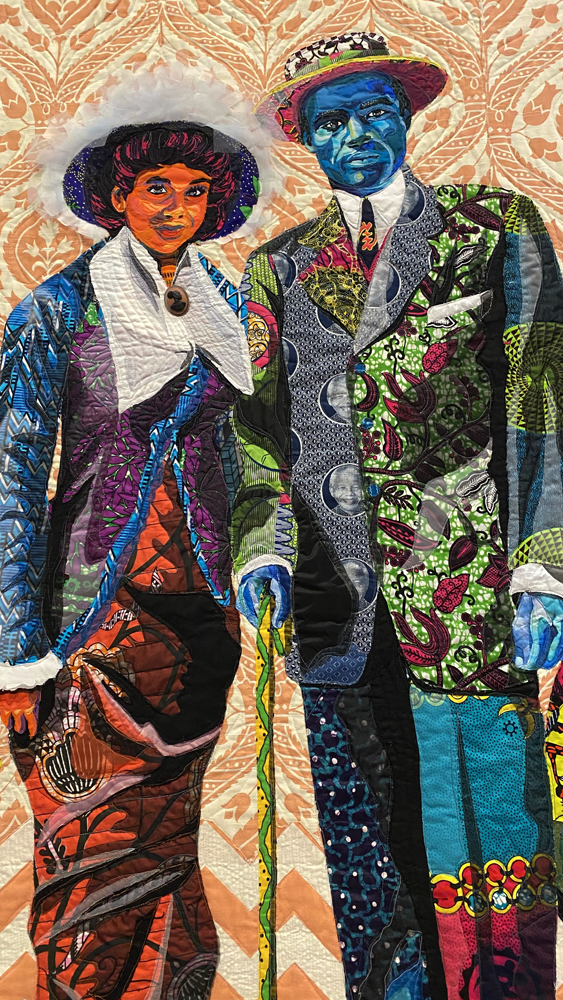 I was struck by the man's suit, above, and how nearly every element of it was a different fabric... 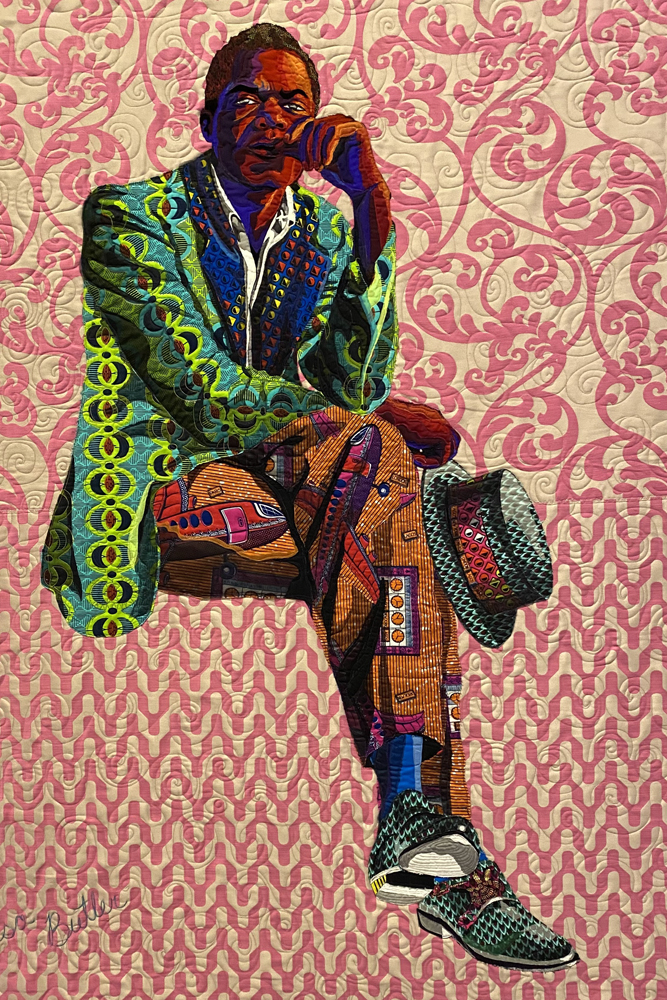 ...the sometimes subtle, sometimes not so subtle differences in background fabric(s). 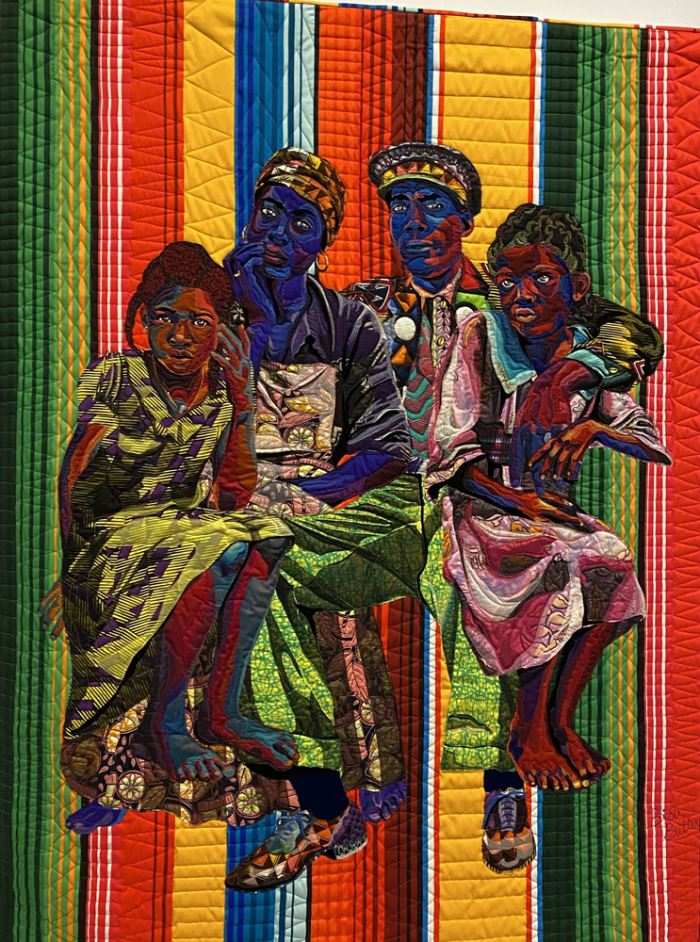 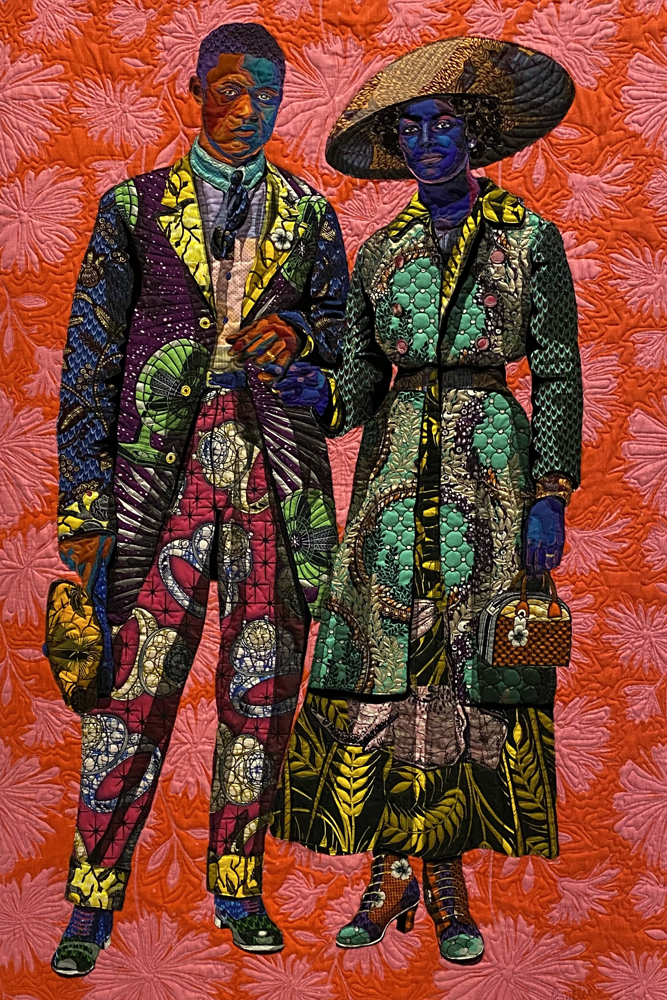 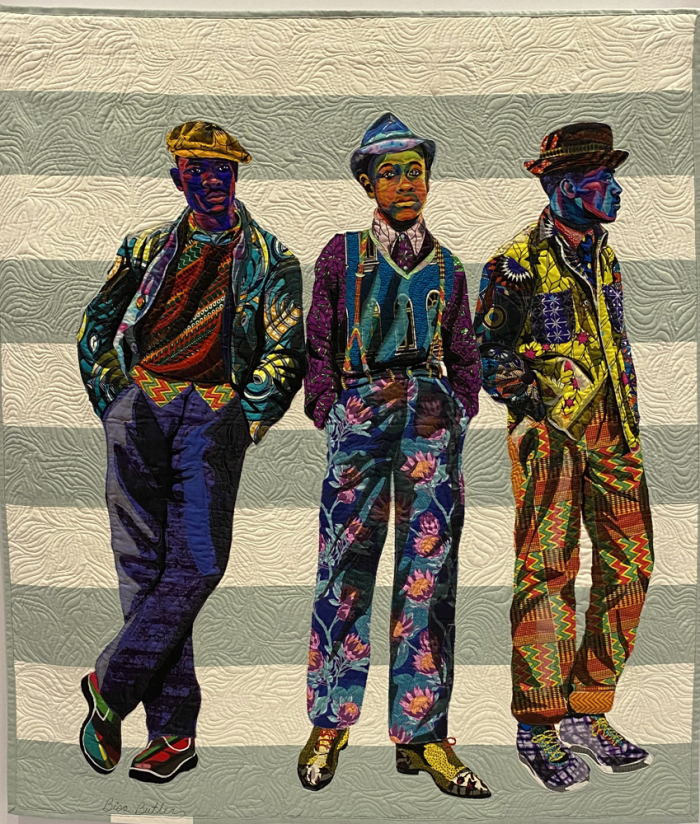 And they way she uses them is just breathtaking... 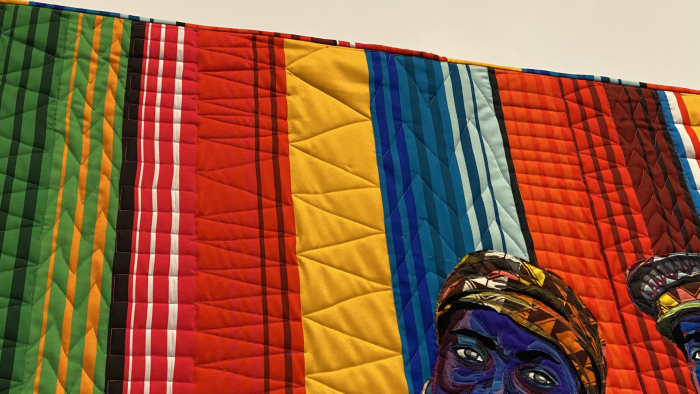 I loved how each section of this striped background fabric was quilted in a different way. A couple of stripes that are intersected by the figures are quilted differently above and below.

The scale and subject of some of the prints is just crazy... in a good way! 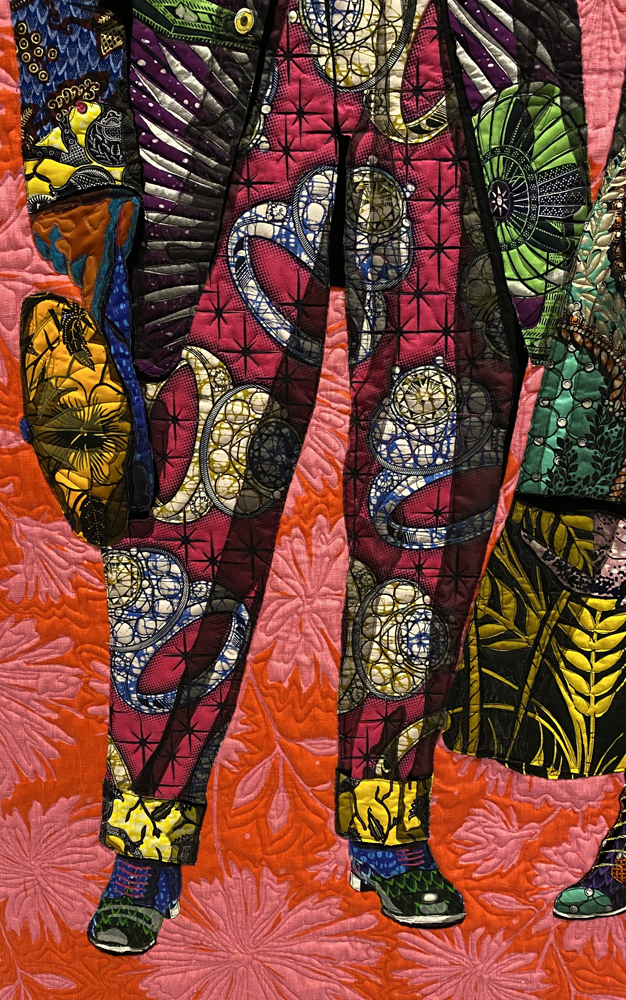 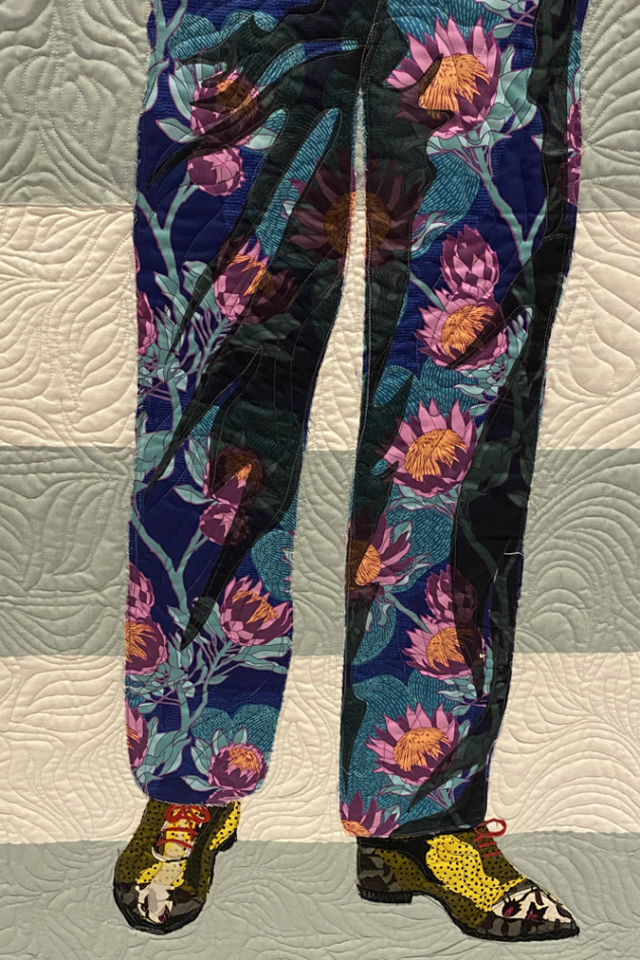 I was fascinated with the way things were pieced... 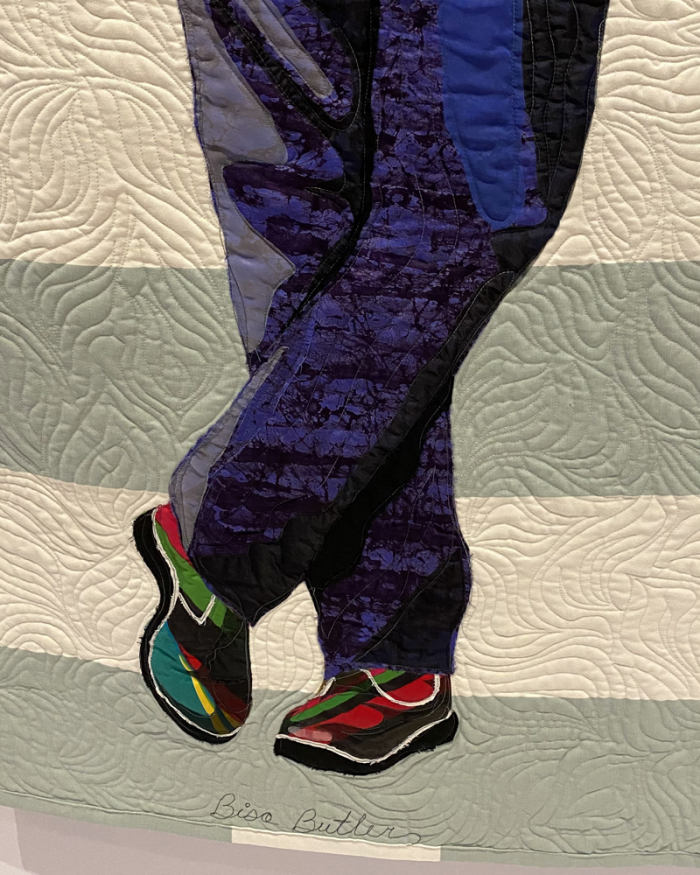 ...and how shadows would be created with piecing, or by adding a sheer layer over a print. The "movement" and dimension -- especially in the large-scale prints -- in all of it -- sort of blew my mind. 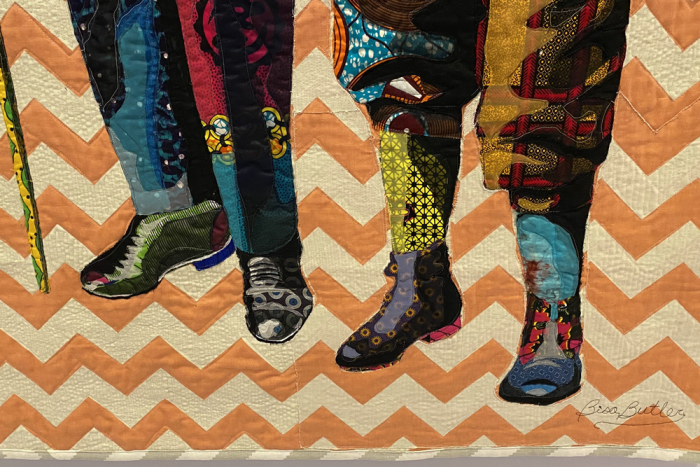 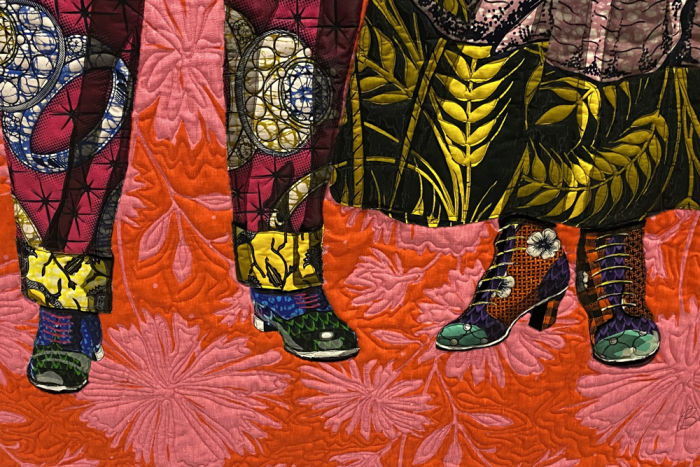 Even the bottom of this shoe... (not to mention every other little thing!) 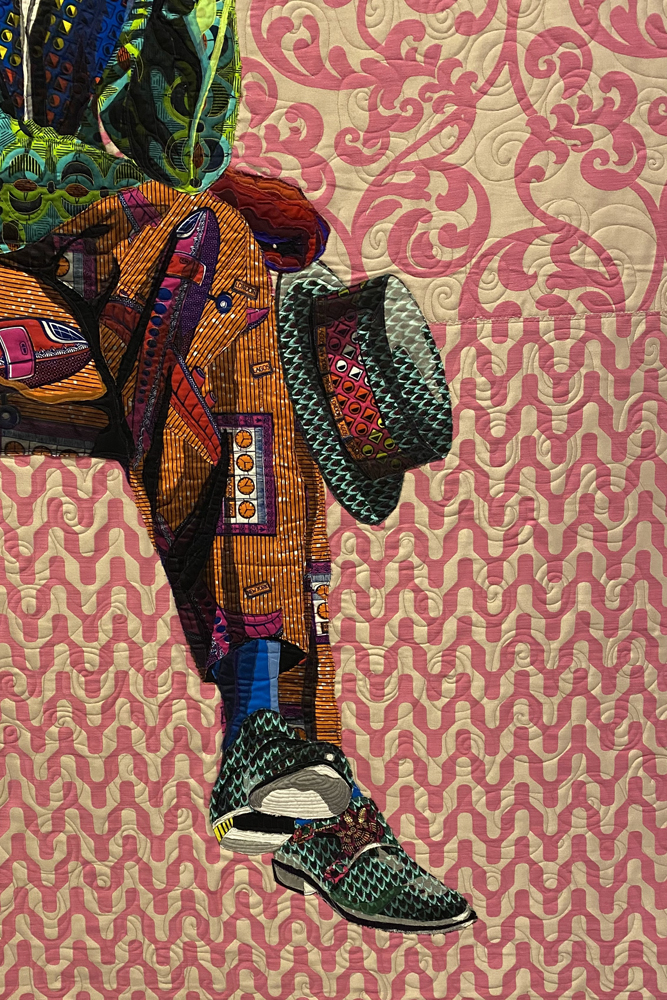 There were only two entrances to Millenium Park open -- on the Michigan Avenue side -- and Cloudgate was barricaded, as well... 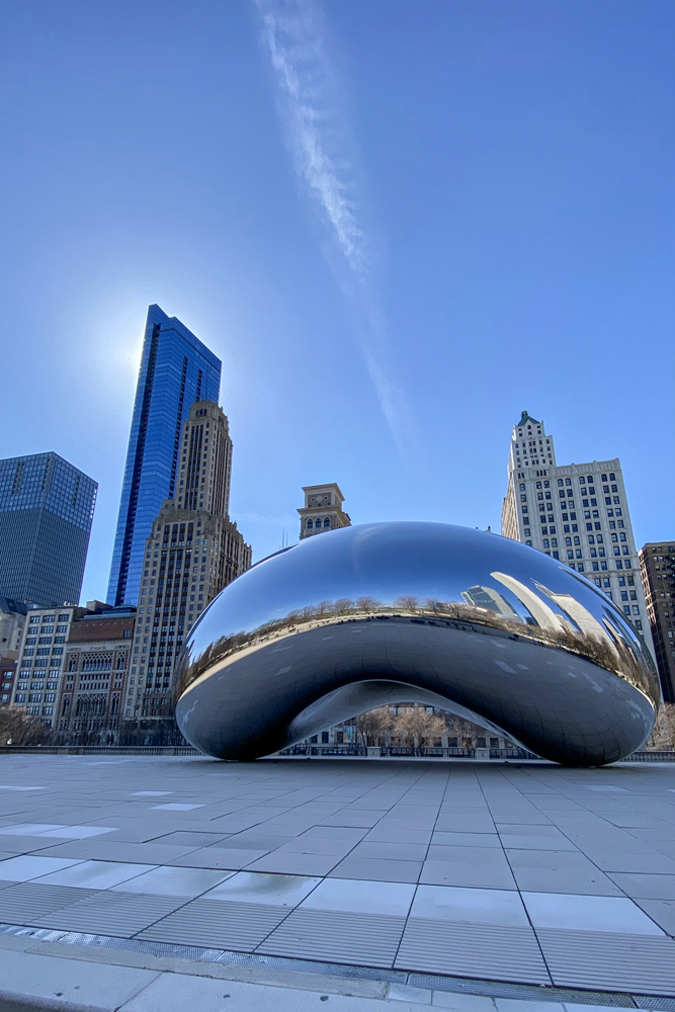 ...which was weird but also beautiful.

You are the 2nd person I know to post a photo of the bean today without people around it. Weird on all counts! That quilt exhibit is incredible, I can't get over her use of fabric to create those portraits. It must have been breathtaking in person.

Those Bisa Butler quilts are nothing short of spectacular! I'm so glad you got to see them, and also very glad that you shared them with us. Chances are I'm not going to get to Chicago in the near future, so thanks for bringing Bisa Butler to me!

Thank you so much for these pictures. I wish I could see these textiles in person but your photos are a great substitute. What amazing colors and shapes and images.

Thank you also for introducing me to Bisa Butler. Her work is incredible. I am going to share this with some friends to spread the word/the joy!

I must see those quilts. Thanks so much for sharing about them!
We'll be headed to Chicago as soon as Keith is fully vaccinated -- mid-May. My son moved there in August and we haven't been able to visit.

Thank you so much for once again pointing me to amazing art. I immediately sent a message to my quilt posse suggesting they have to check out this post and your link. Just stunning. I'm not sure I'll be feeling like getting on a plane to see them in person, but goodness are they stunning. I suspect pictures can't really do them justice. Thanks again.

Wow! Those portraits are so incredibly detailed and beautiful.

Those quilts are absolutely amazing. To have the vision needed to out all those elements together...what a gift!

WOW-WOW-WOW!!! I had never heard of Bisa Butler. What an AMAZING exhibit. So glad you got to see it and then share it with us!

Wow, these portraits are incredible! It will be a while before I get back to Chicago (we should have gone about a year ago for a family bar mitzvah, but of course it was canceled), so thank you for sharing your trip with us!

I am so happy to see you guys in Chicago again! (Although Cloudgate with no people is . . . very weird.) I have been planning a (likely day) trip to Chicago for later in the summer -- definitely before the Bisa Butler exhibit is gone (because I MUST see it). Tom and I went to the new Purple Pig for our anniversary BEFORE the pandemic, and although it's much the same-just-bigger, we did miss the hustle-bustle/community crowding of the old location. That was then, this is now! I'm looking forward to easy trips to Chicago again. . . sigh.

Thank you for all the Bisa Butler shares ... I hadn't even heard about her and WHOA! How much longer til Kate leaves? Sara is enroute (spending tonight at an airport hotel) and I am counting down the hours - just about 30 now!!

I'm the one with the SAIC kiddo. I sent them your IG post and asked if they had seen the Bisa Butler exhibit. They had, and proceeded to gush about it. The pictures are beautiful, but they say they're even better in person, so what fun for you to see them! Your pictures are really fantastic, and the quilts are stunning. Thanks for sharing!

Now I want to get back to Chicago. But probably it won't be soon just because it won't. But as I have family and friends outside Chicago, it will be some day. :)

Of course my first click was to the Purple Pig. OMG I've got to go there with my girls-We love to share food and that way I could pick many things to eat! Almost all the appetizers look great.
The Bisa Butler exhibit is amazing. It reminded me of going to the Quilt show in Paducah. I would have to see my fav quilts more than once to take it all in. I hope her exhibit travels my way. I loved the tap shoes.

Thank you so much for posting the quilt pictures - what a riot of color and texture! Maybe post-vaccine I can travel to Chicago and see it in person. Astounding!

What remarkable portraits. Thank you so much for sharing, for those of us who can't get to Chicago.

What a treat to see so many Bisa Butler quits at one time. I had the good fortune of seeing ONE quilt in NYC - I want to say last year - but it was November 2019. I could have stared at it for hours.

Those quilts... wow. I saw them in IG and they stopped me in my tracks! They are just stunning! I am glad you braved the wilds of the world to share them with us!