It's Friday, it's sunny, Spring is springing... even though I see no visible signs of that (other than melting snow), I know it's happening! I'm not a fan of "springing forward," and having to change my clocks, but it sure has a nice ring, doesn't it?

I have my own little spring: 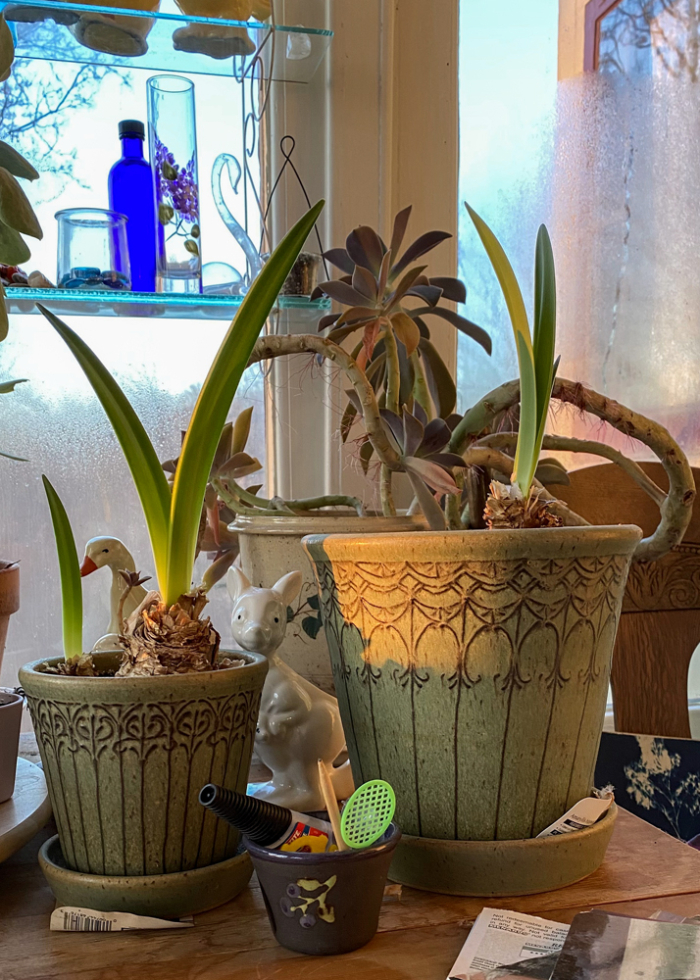 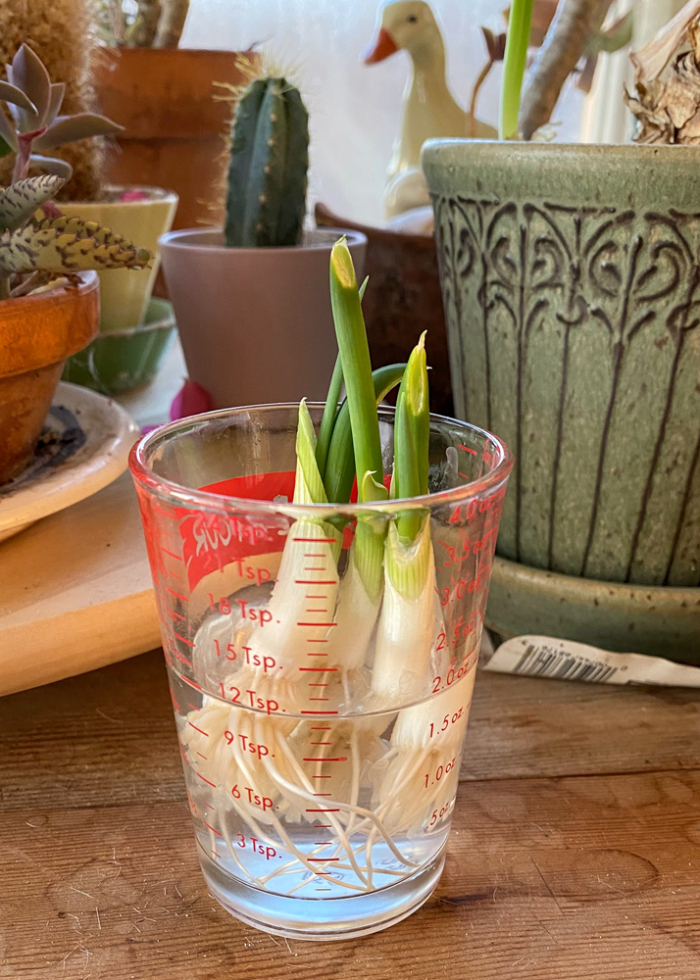 Amaryllis! I'm not seeing any flower buds yet, but it's still early. Green onions! I don't really care that much for green onions, but Rusty loves them, and I've heard blips about growing your own from scraps for ages, and finally decided to do it when Chef BB mentioned it during cooking class last weekend.

Speaking of cooking classes, I've signed up for yet another, having been sorely tempted by a class by Chef Marcus Samuelsson featuring recipes from his newest cookbook...

There's barely a post these days without a crochet update:

The motifs for Row 6 are underway! 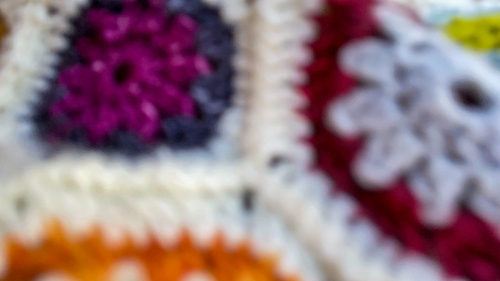 I took a weird series of blurry photos this morning as I went outside to photo the blanket on the sidewalk -- my leg, my shoe, and two of the blanket. I liked this one!

I have other needlework to catch up on, plus taxes are beckoning... well, not exactly beckoning as in "seem to be appealing and inviting," but I sure would like to get that off my desk. I got a little start last week, and had a meeting with Ali's accountant last night, which went better than any before and I only had a couple of things to send her this morning (instead of a long list of homework)... so that's encouraging.

We shall see. Progress will be made in one area or another over the weekend!

Finally, in a recent effort to confuse/trick a neighbor boy, Ginny "dressed like Junah"! 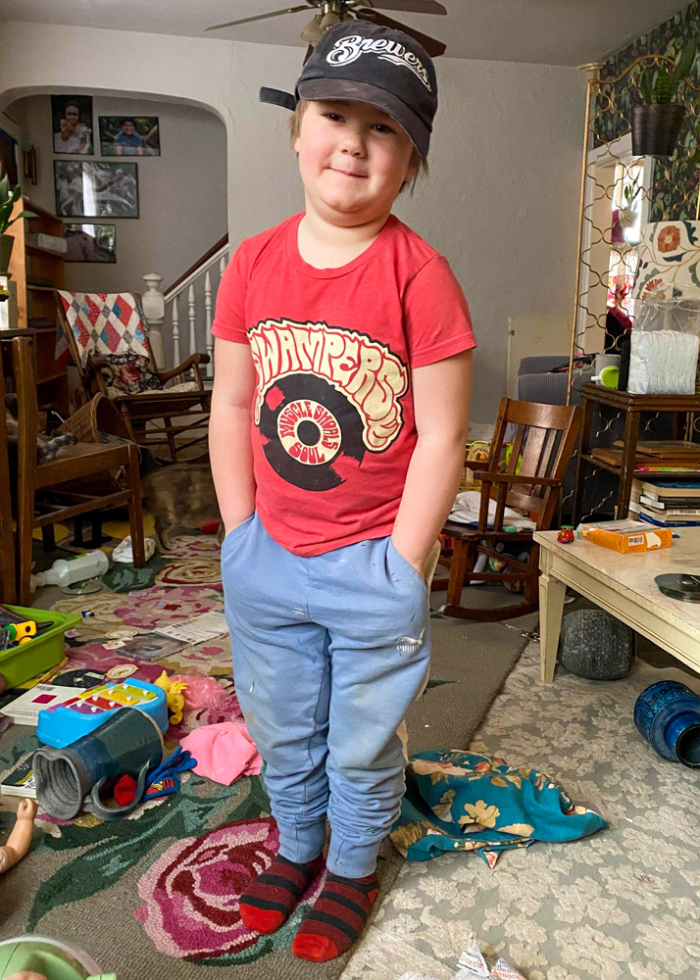 Who can't use a little Gin on a Friday?

All that green is encouraging, even the green onions! And Gin as Junah is spot on! Happy Weekend to all!

Gin cracks me up. I love DST, but they've moved it far too early. The old version with the first Sunday in April worked just fine thankyouverymuch. I hate going back to dark in the morning.

In defense of those green onions, throw some on the grill sometime and try them like that. Happy weekend!

That Gin! She cracks me up EVERY SINGLE TIME. Such a character (and a fun one). My friend's husband grows onions just to get the scallions! They eat them like candy! Every time I see your crochet I am smitten, then I get lazy/tired! You've reminded me I should follow up with our accountant and see what the status is on our taxes...I dropped everything off almost 2 weeks ago (or maybe it was 2 weeks plus - all a blur now). This has been my Friday from Hell with 3 conference calls in the morning - it's enough to make me consider retiring....

OH, Gin! She could definitely pass for Junah! I guess it's time to get my tax stuff together and bring it to my tax guy. Blergh.

I'll have to try growing green onions-I use them a lot. Your crochet project is progressing so beautifully. How big are you planning to make it? The class with Marcus really appealed to me, that is until I saw the 4 pages of prep items to make the dish! I can't wait to see your finished dish.
Gin is so much fun to watch. Did she fool the neighbor kid? Hope your weekend is wonderful.

Oh Gin!!! I think we all could use a little Gin EVERY.SINGLE.DAY! (and I love Marcus Samuelson! What fun!)

I was only looking at the photo of Ginny out of the corner of my eye at first and totally thought it was Junah, so she nailed it!

I've never tried growing green onions, but did you know you can grow celery the same way? I've planted a couple of the "bases" that I've cut off and while I haven't harvested any actual celery yet, you can get celery seeds from letting them grow and flower.

OH Marcus Samuelson, I am soooo envious! L.o.v.e. him. Sounds like these on line things are so fun!
That Gin...don't you just love how she gets right in to whatever the deal is....what a sweetie!

This is the time of year that is in need of green (if it isn't right outside your window). I have tulip bulbs in bud that are on the edge of hope (color?). Your crochet has been so fun to watch as it grows. That is another epic project. Gin, as usual, cracks me up. She can girlie it up or dress it down. A versatile one, she is!

LOL (actually cackling, not just "laughing") Gin TOTALLY had me fooled! ...and I love seeing all the making and growing ... thank you for sharing all those bits and pieces! (although, car coat seems to be missing?!)

I was kind of off the computer for the weekend . . . and I missed Gin on Friday! But I can use a little Gin ANY day -- and ohmygod. I thought it WAS Junah for a second there! She NAILED it! :-D
Have a great week, Vicki! Love the cooking class idea -- and can't wait to see what you make!