Annie & I took another online cooking class on Saturday. This time it was "Online Thai Tonight," by Sur La Table. I learned about their cooking classes from Kym, who went on an exploration after reading about our Pisco Sour adventure, and the class that we took from the New Orleans School of Cooking. I love the way this community works! 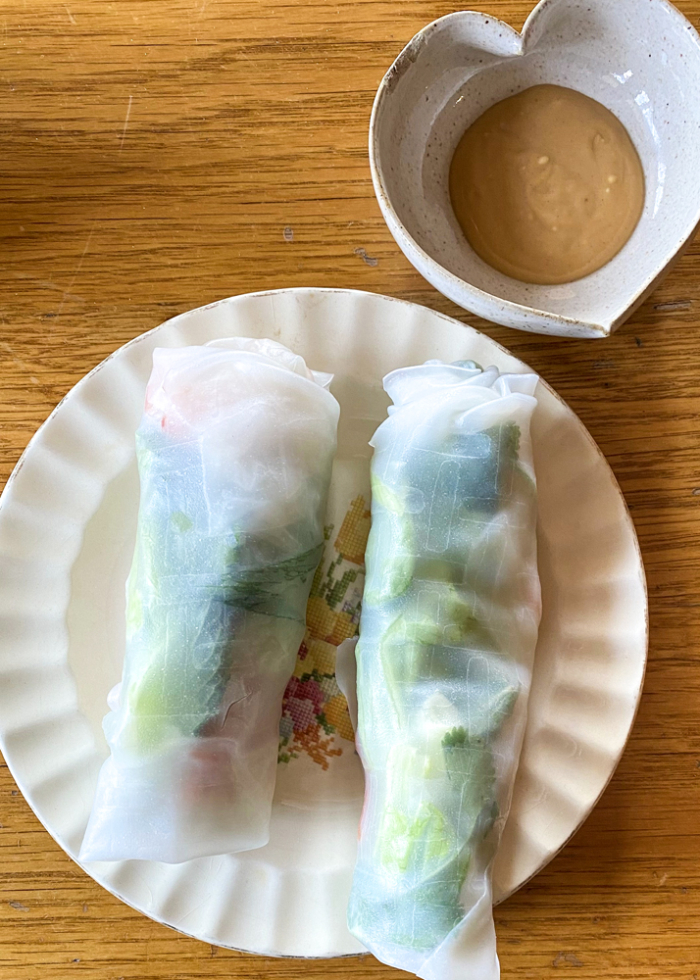 One of our recipes was for Fresh Rolls with Poached Shrimp (or Spring Rolls, as we call them) and Coconut-Peanut Dipping Sauce (a lot of Peanut Sauce). These were actually Sunday lunch, made fresh for me by Kate. In class, we also made Stir-Fried Wide Rice Noodles with Beef. We enjoyed it so much, and the food was so good, that we've signed up for Chef BB's "Authentic Fried Chicken & Sides" later in the month. Both of us were drawn in when Chef said that it was her class for Women's History Month... and that this was her women's history!

Yesterday, for International Women's Day, I accompanied my eldest to Milwaukee where she needed to get her biometrics done in order to complete & send in her visa app for moving to the UK -- specifically, Scotland -- so that she can continue to carve out & pursue the life & career that she desires. You may recall that this move was on the table a while back, then off, then a bunch of other things were proposed/considered, and it swung back around to Scotland again. It's where she really wants to be, and she* came up with a more economical way to do it (housing-wise, mostly) (one of the biggest barriers), at least initially. It looks like she'll be heading over in 6-8 weeks on a 3-year visa.

I thought a lot about my "international" women -- Ann in Peru (formerly of Spain & Brazil), Maddy in Australia, Kate soon to be in Scotland, Ali here in Wisconsin -- celebrating all that they've already achieved for themselves, and the new pursuits that they explore... and how they all continue to inspire.

In other not-so-new news, I continue to crochet. 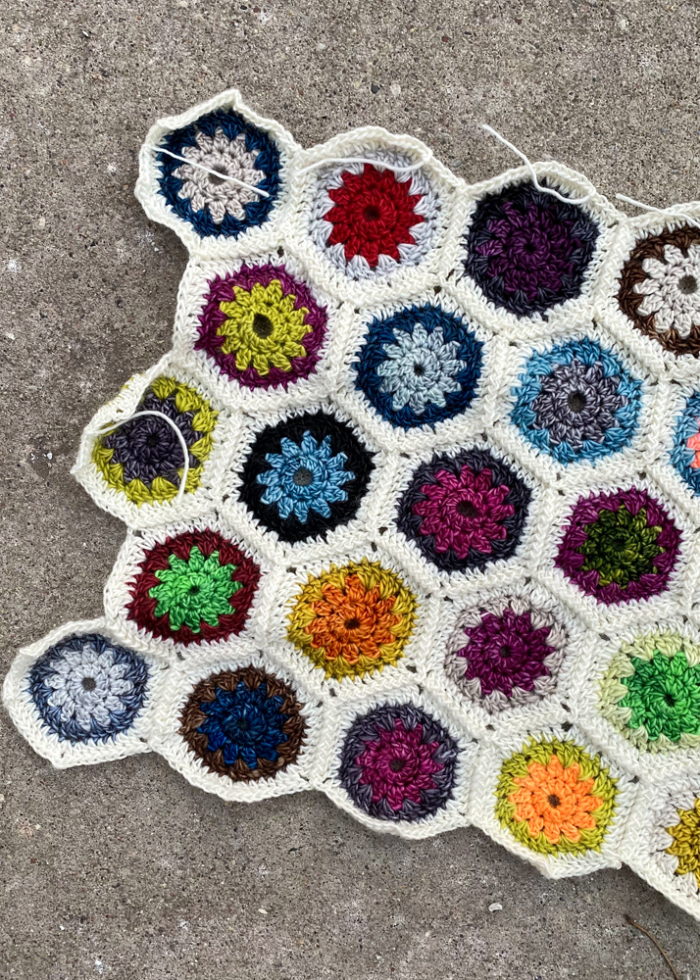 Oh boy. While waiting in the car for Kate yesterday, I worked on joining a hexagon to the blanket and ended up having to fudge -- too many stitches were left after working all the repeats. Y'know, crochet is not my "natural" craft... I'm feeling more comfortable with it, but it still feels quite awkward, and I certainly can't "read" it like I can knitting. Anyway, it dawned on me after I cut my yarn, that perhaps my count was off -- which would surprise me because I feel like I'm counting all.the.time -- but, sure enough, there were 13 repeats in that particular motif instead of 12.

Aaannnnndddd... turns out, that was not an isolated incident. Haha!

Also, continuing with the random/unplanned design of this project, I am joining the fifth row from left-to-right instead of right-to-left as I've done all the others -- and as I intended to do and THOUGHT that I was doing (though I knew there was something "different").

Guess what? I'm not re-doing any of it. I love this darn thing, warts and all.

Those spring rolls look so good and I am really tempted by that class! The pandemic has thrown a wrench into seeing my kids as often as I'd like, but you've got the whole world to travel to see your international women. I'm glad Kate will be heading to Scotland and pursuing her dream, and I'm hoping you can travel later this year. Keep crocheting; it looks great and I can't see any warts!

I also poked around right after your virtual cooking class, but didn't find anything that inspired. Might be time to look again. Thanks for the reminder. Having people in far flung places can be hard, BUT it can certainly boost the incentive to travel to those places.

I adore that you have so many international women in your life, it's a real testimony to your appreciation of travel and the world. Imagine what our grandmothers would think about that?! I'm glad you enjoyed another cooking class. I'm tempted by the macarons at Sur La Table.

Those Spring Rolls look fabulous! And YAY for Kate being able to do what she wants. So awesome. You have an inspiring and amazing group of children and grandchildren Vicki! And...hopefully...you'll be doing traveling before too long. Love your crochet!

Scotland sounds amazing for a week... three years makes me swoon! Your International Crew is inspiring! (as is your crochet!)

The cooking classes sound like so much fun. I've really got to do some research and see if I can find one to do with my daughter. She loves to help me cook and to watch cooking shows on TV, so I think it would be a lot of fun for us to take a class together.

FWIW, I have the same issues with crochet. I'm never completely sure I'm putting my hook in the right place or counting correctly. But I can't tell that there's any issue looking at your hexis in progress, so clearly it's not a real issue!

Your spring rolls look yummy. Thai cooking is so fun. One of the local shops here held free Thai cooking classes every Saturday. It was so fun.

I LOVE that our girls might cross over the ocean (or the Arctic?!) KUDOS to you (and Rusty) for raising women who are courageous enough to venture out so far from home. and I can't tell that anything's remotely amiss with your crocheting. are you and Kate still embroidering, too?