It was a long weekend for me, with Monday off this week... that always means a lot to share!

We got outta Dodge on Saturday, and drove down to Sheboygan to visit the Art Preserve | John Michael Kohler Art Center -- technically, as Beta Testers! We reserved an early time slot and practiced physical distancing, and really, museum-goers are pretty good at that in general! The museum doesn't officially open until late June, and it's still a work in progress -- also no photography allowed right now -- but it's AMAZING! 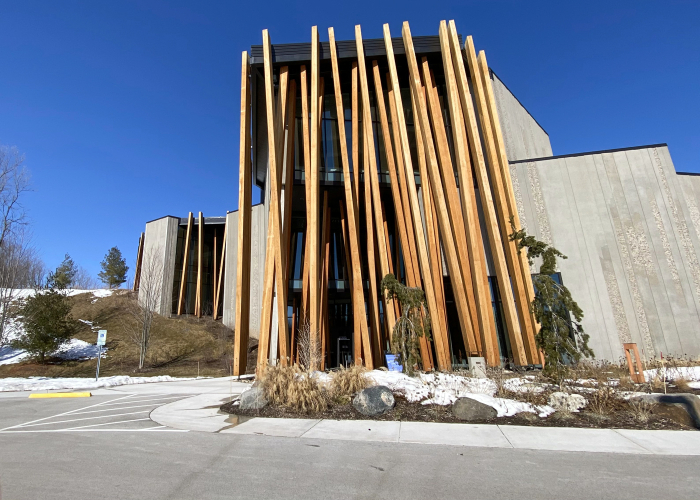 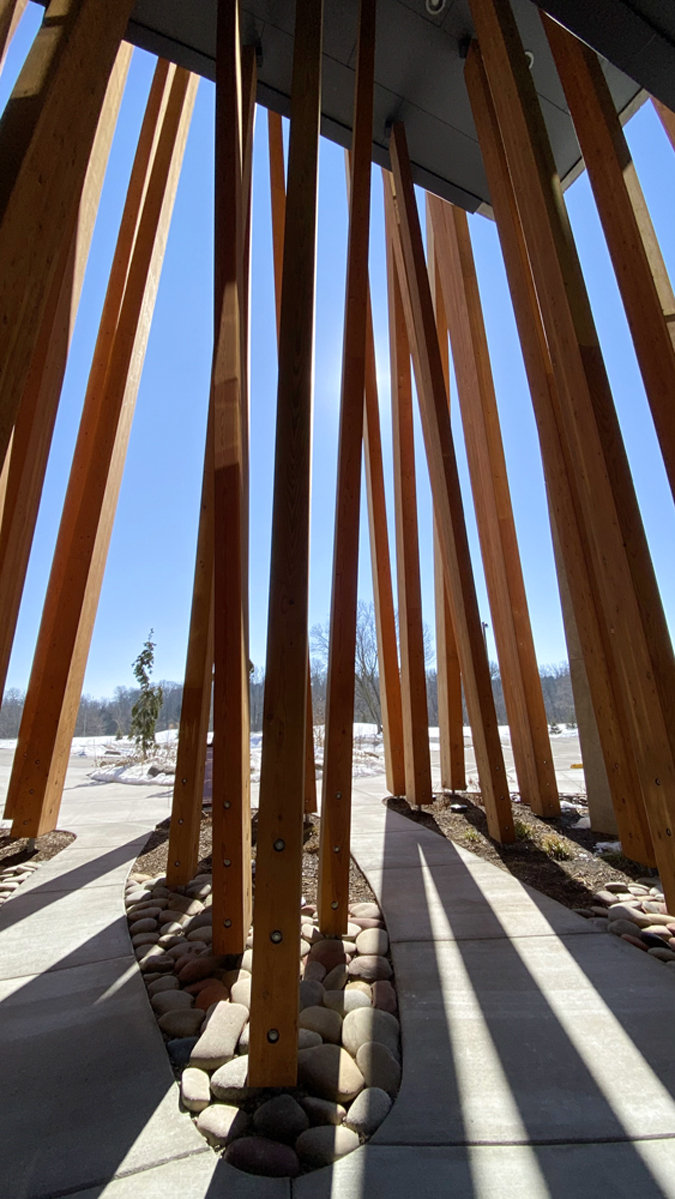 The last museum I visited was the Black Mountain College Museum, over a year ago. sigh

It was a gorgeous day and we were hungry by the time we finished, so found ourselves a nearby Culvers and ATE AT OUTSIDE TABLES! It was sunny and warm, and only occasionally a little chilly when the breeze picked up, but otherwise... IT WAS SO NICE!! We got some looks from folks in the drive-thru, but enticed another couple from inside to enjoy the fresh air and sunshine. I can't tell you how wonderful it was.

I discovered that my amaryllis are sprouting again. 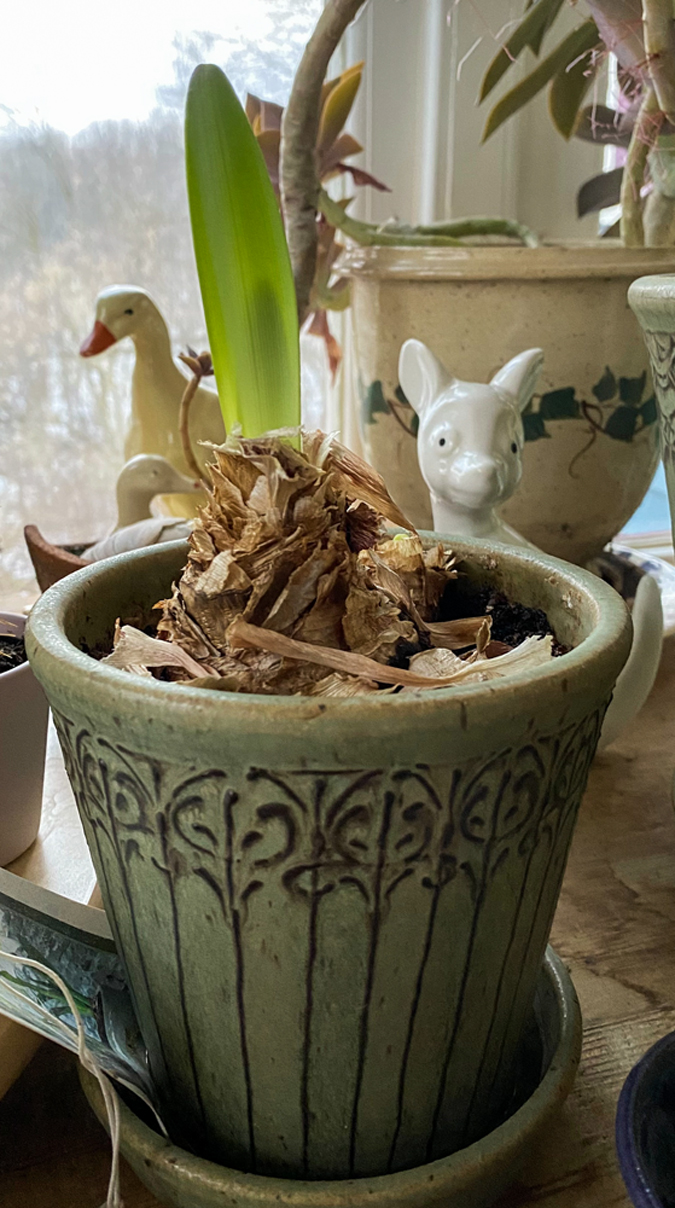 I took photos of my Alabama Chanin project on Sunday: 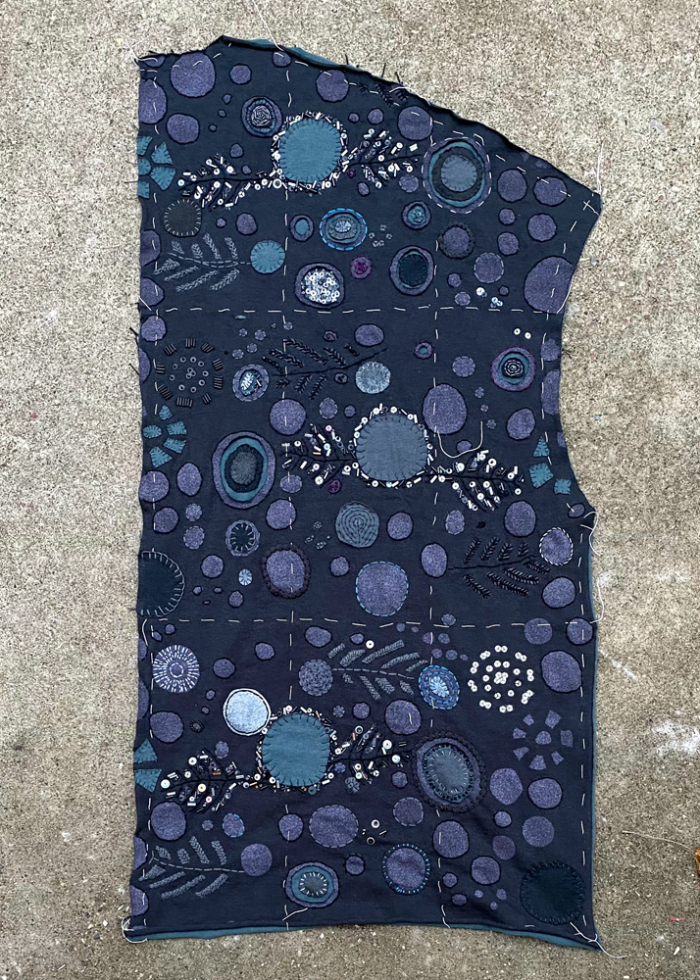 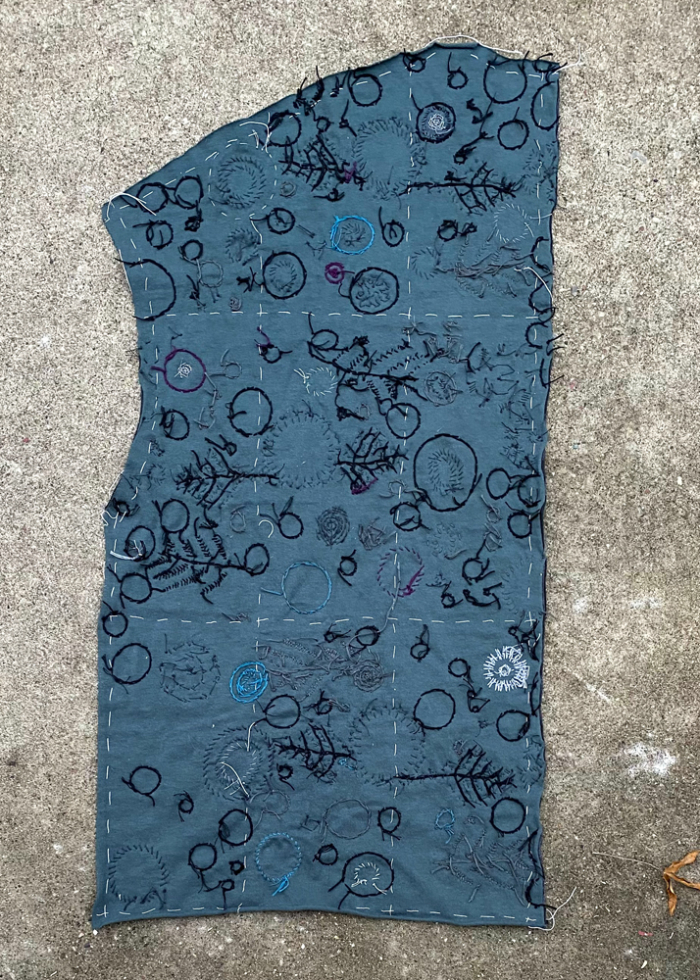 This piece is SO CLOSE to done. I didn't work on it yesterday (you'll see why in a minute), but surely the other side will be underway in the next day or two!

Last night, I used up all of the circles I had finished to complete the third row of JAYGO hexagons.

I can't even express how happy I am about the way this is coming together. Work at the circle factory will resume this evening. I'm also feeling the itch to knit -- it seems like I haven't knit a stitch in ages -- so might begin one of those Safe at Home pillows that I've been blabbing about.

Embroidery continues, too, another few stitches on the Bingo card. Kate's really into it, and I'll have to share a couple of the other pieces she's done/doing. 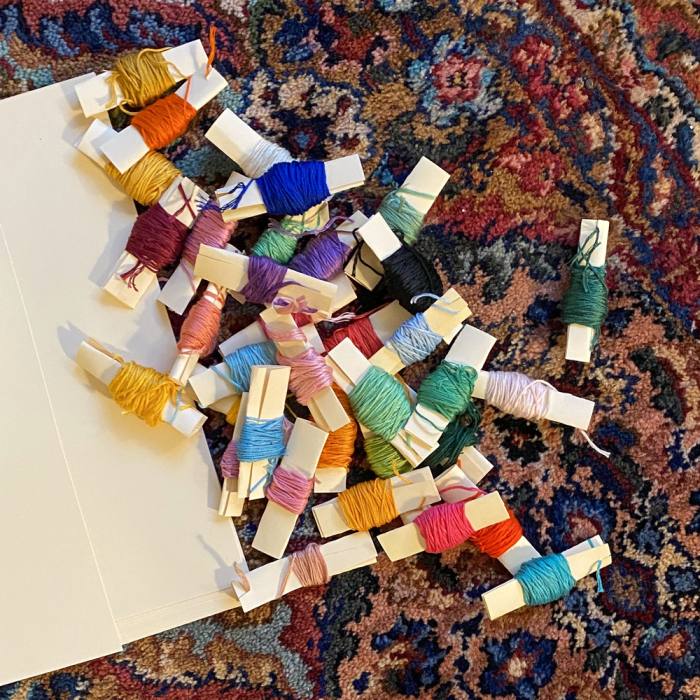 She spent quite a bit of time over the weekend untangling, sorting, and winding floss acquired from various sources. So satisfying.

That brings us to yesterday -- with kids! We had about an hour with just the girls, and then the boys came over, too. 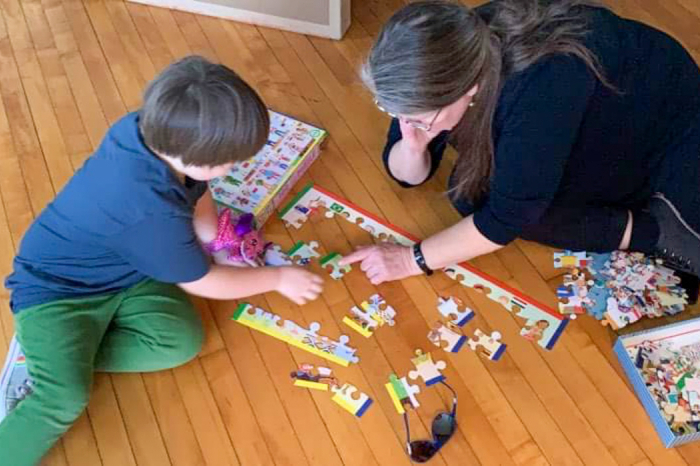 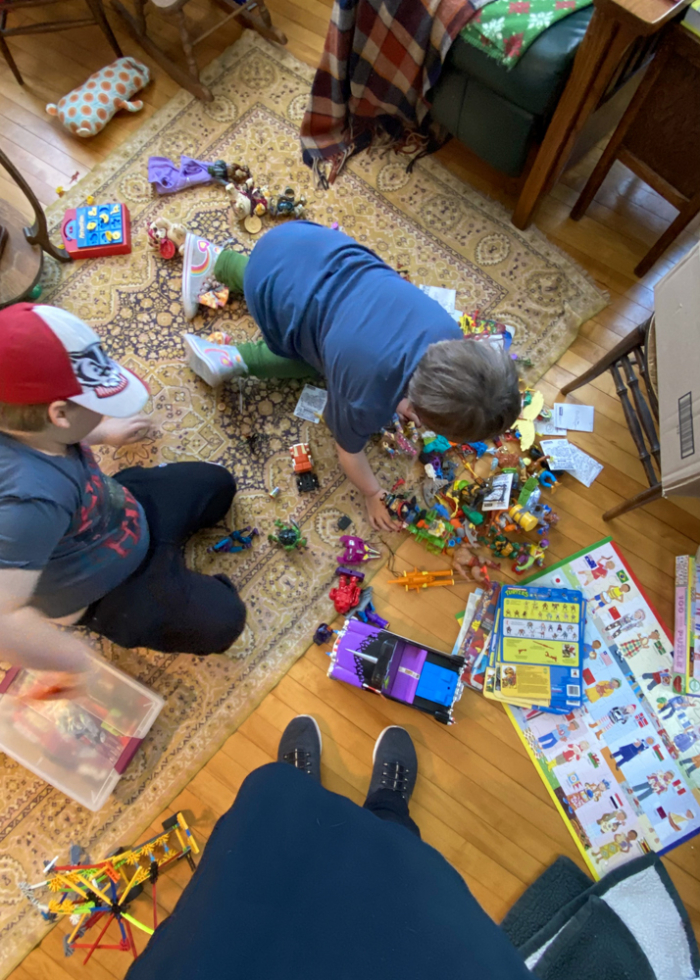 Ginny & I put together a new puzzle -- 100 pieces, Children of the World. And then there was a ton of fun with Ninja Turtles, and a little bit with K'nex.

Also, Junah helped me put together a new end table. He was all over the assembly of things when Ali returned after our recent IKEA trip, and I decided to save this little project for him. It just makes my heart sing to see him figure it all out and, again, I was a mere helping hand! 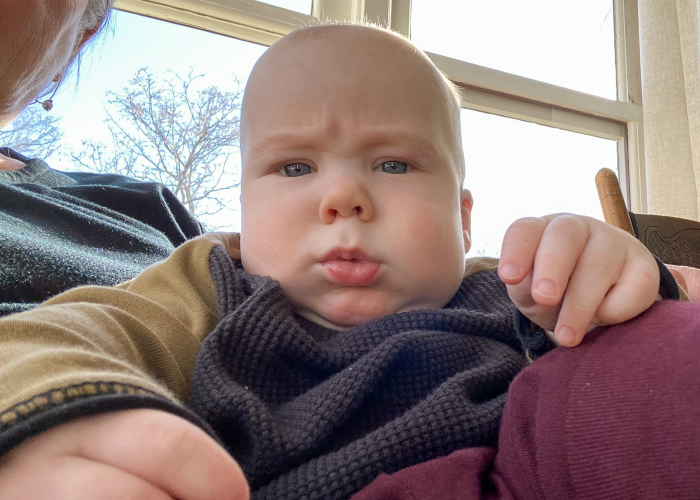 Davy is drooling like mad... he'll be six months old in a couple of weeks!

Malina changed clothes at least three times. I found that little slap-on dragon bracelet on my Target run and picked one of up for each of the girls -- they were a BIG hit! (Velcro wrist rattles for Davy... that just barely fit on his chubby wrists! and a LEGO mini-figure for Jün.) 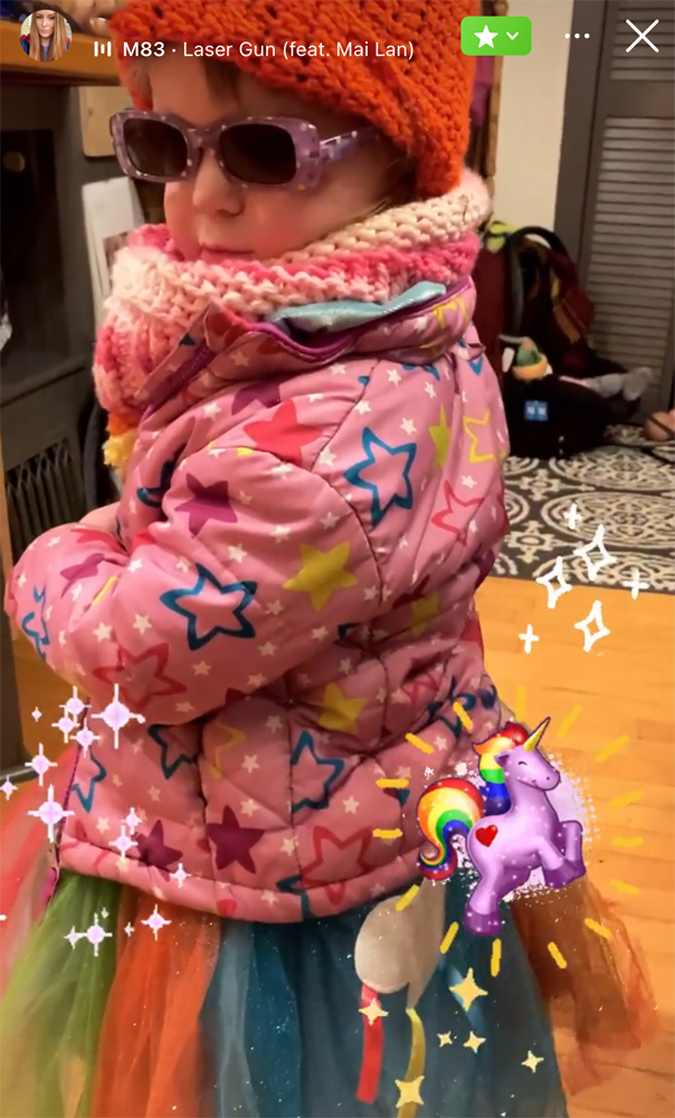 ...and struck a pose upon departure! ❤️

That museum and lunch (outside!) sounds so wonderful, I'm glad you got to do that. And fun with the kids, too. I feel like I'm seeing a lot of Maddy in that photo of Malina.

All your grandchildren look to be real characters...but Malina - stylin!😎. Love it!

A museum, lunch outdoors on a sunny day, those wonderful grands, your stitching and hooking make a great long weekend. I love the look on the face of the deer (?) behind the amaryllis!

Those kiddos make me smile every time I see them! They have such distinct personalities.

Those kids! They are so full of joy it seeps out into the reader and I happily soaked it all up!

As usual, there is a lot going on in your life! The circle factory is certainly putting on a show! And, your AC project is amazing. That design gives you so many opportunities to play and use multiple techniques. (I am sewing my jacket together and forgoing , for the moment, any embellishment). Ginnie made me laugh out loud as she looks stunning in her colorful costume. She has quite a sense of style! The dragon bracelet just makes the whole look!

That museum! I’m off to learn more about it. I hope what it houses, are as wonderful as the entrance.

Your museum day and lunch out sound fabulous! And Malina! What a little fashionista. Actually all of them are - such fun personalities. What a perfect long weekend!

Malina is definitely growing in to her own style. Although I do think it has shades of her big sister!!!
Always fun to see pics of those kids...Good for Junah and his ability to "finger it out"!

I can't even find a favorite part from all of this! well, let's be honest, of course it's the kiddos, but still, it's hard! and Malina ... love love love how she's coming into her own.

Nothing like a good museum to brighten your day. Who is Malina channeling for her fashion choices. Very teenage. I didn't see a pic of the table- Good job Junah. No wonder the AC jacket isn't done-you're having too much fun with the grands. And you and they will have wonderful memories of these times to enjoy forever.