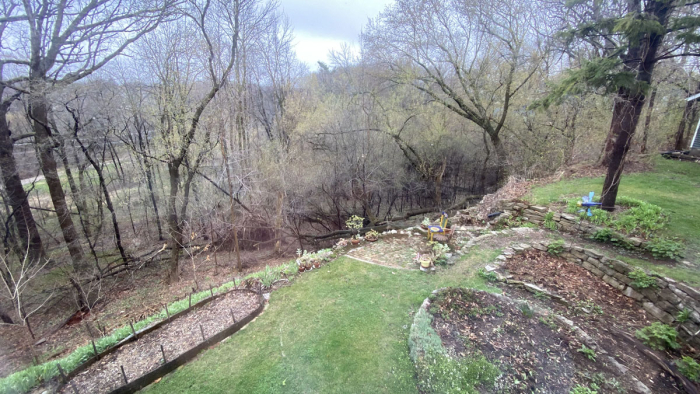 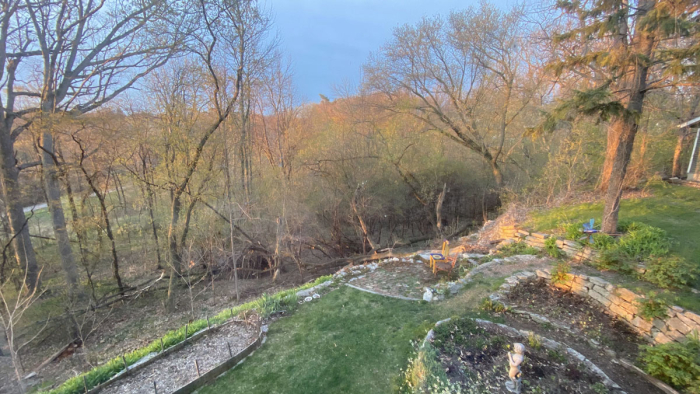 Sunshine! Rusty put the patio plants out early (top photo), and I warned him that it was TOO early (as I do every year), and with a few frosty mornings lately, they've been tucked back inside. I'm going to try to take a semi-regular series of these photos.

Monty Don and Gardeners' World have been a balm over the past year, and an inspiration... to Kate more than anyone, especially as her interest in gardening has been growing over the past few years. 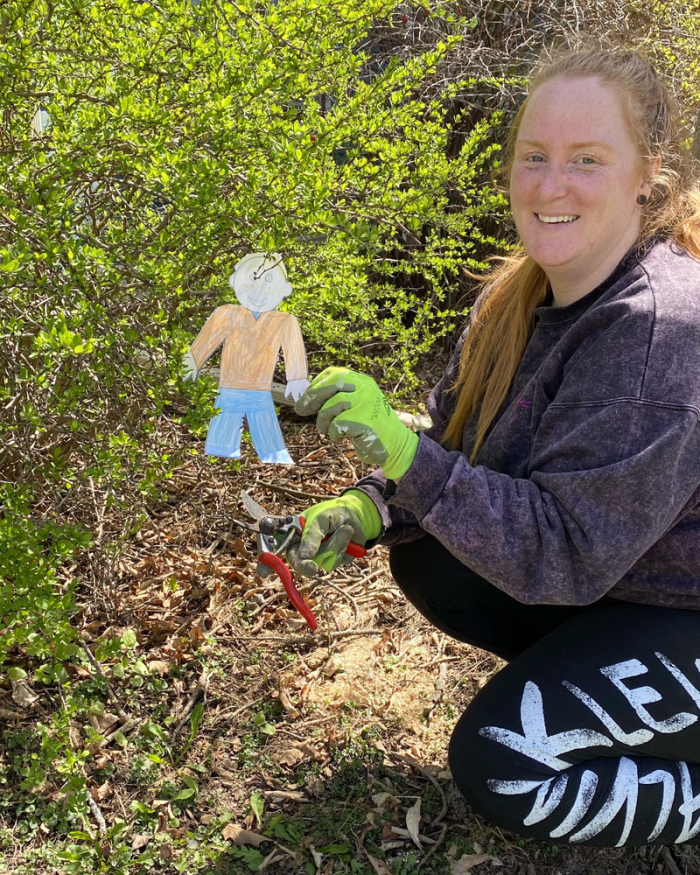 She was trimming the barberry  on Saturday when Flat Stanley arrived from Peru (via Florida)! Well traveled, he'd been to England and Spain, too, and will soon head home to California... but not before lending a hand around here!

I took a walk down the hill to look for may apples, and I found some! 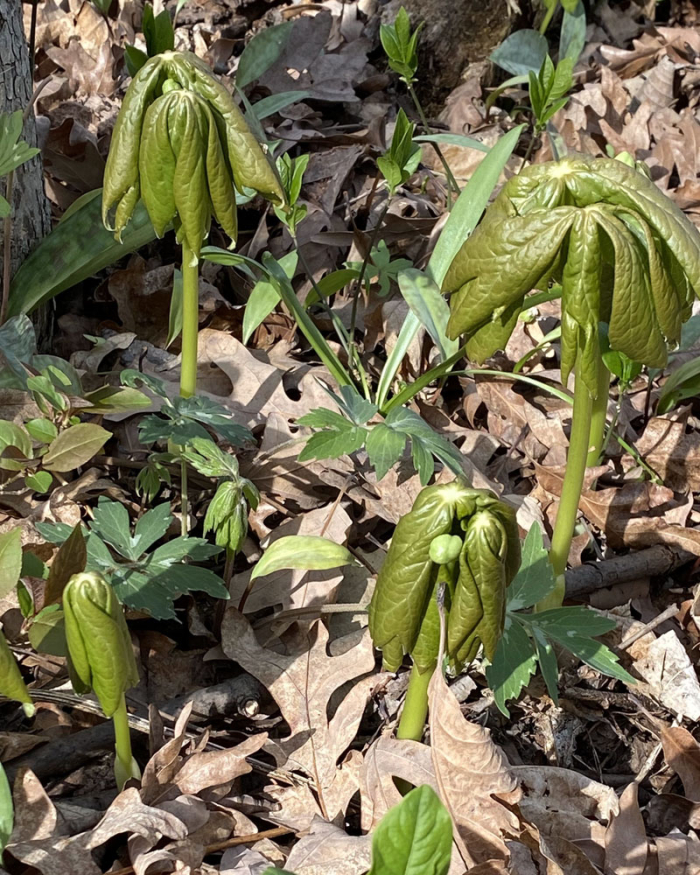 There's a nice patch down there, and they remind me of my mom. The snowdrops are nearly finished, and the dogtooth violets, aka trout lilies, have appeared -- the leaves, anyway. No flowers yet. 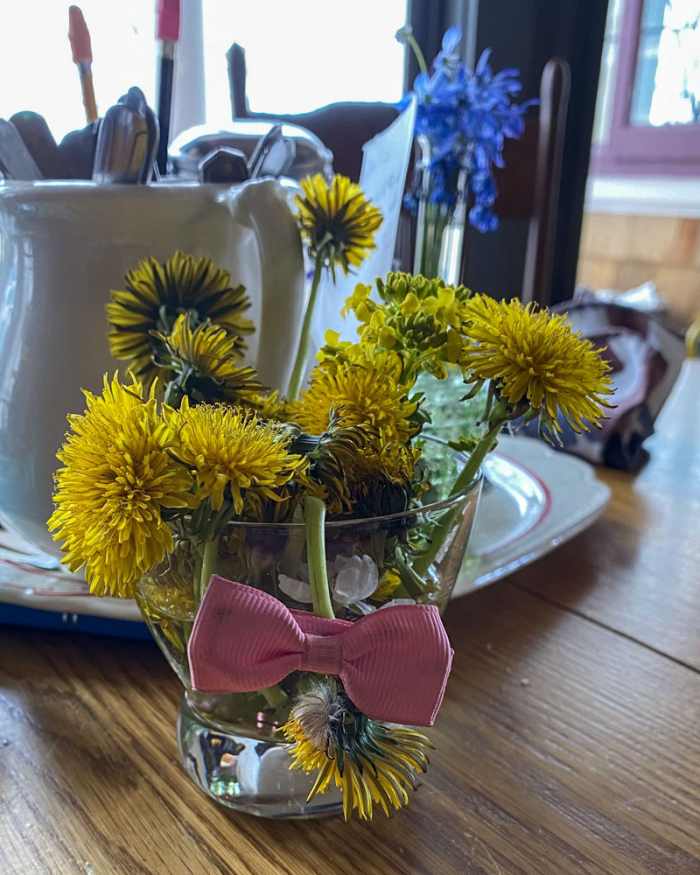 There are other types of flowers blooming now, though, and the girls are happy to pick (and adorn) bouquets! 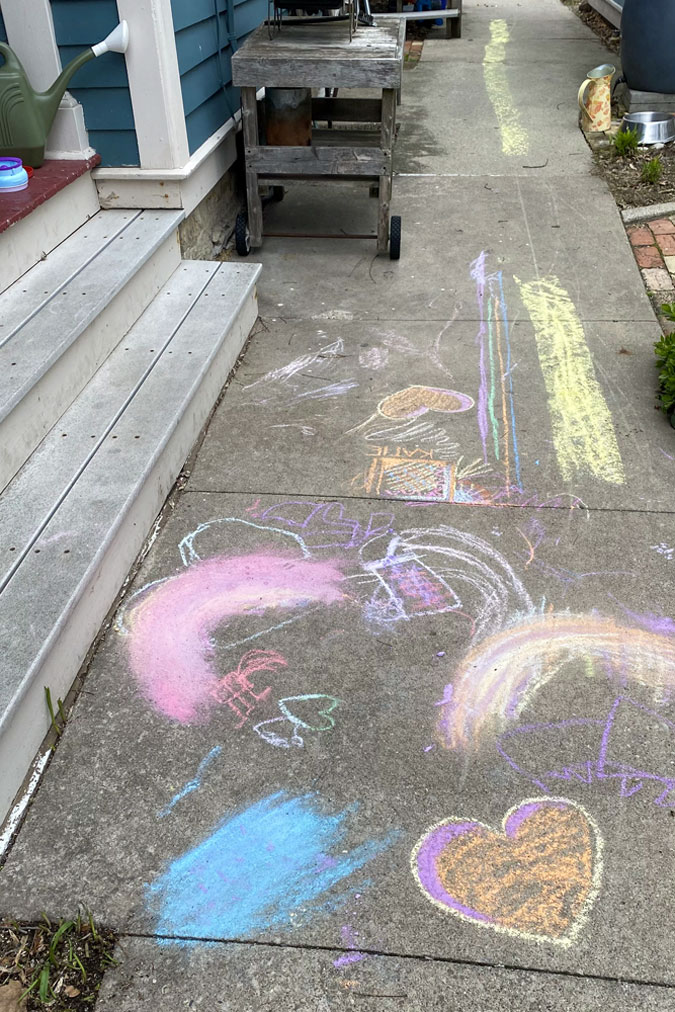 And, finally, the first of many sidewalk masterpieces. The parallel lines are marking the shadow line of the roof as it creeped eastward (pretty quickly, actually)!

Things are looking very green in a short time (even if Rusty is a bit anxious)! I miss having little boys bring me dandelion bouquets, so I'm glad to see yours. I'm also thrilled to see your Mayapples. I used to look for them with my grandmother and one year we made Mayapple jelly. I don't remember how it tasted because I was too afraid to eat any. All parts of the plant are poisonous but the fruit is supposed to be okay once it turns yellow. I wasn't willing to take any chances and don't think I'll be making any poisonous jelly now!

What a gorgeous yard. I'm sure it's a ton of work, but I can see why y'all enjoy your new room on the house and your pergola (or gazebo, I forget). Every yellow bouquet is a winnowing of the herd. So, they are extra nice.

What a great idea, Vicki -- to "watch" spring creep into your backyard through the camera lens! Like your sidewalk "roof lines" . . . I bet it'll move fast! (We're having snow right now, so I'm hoping it all starts moving a little faster . . . c'mon spring!)

Oh May Apples and Trout Lillies - makes me think of my parents who always found them on their hikes. And Dandelion bouquets! Sweet. Love the pictures of your land and it will be fun to see a series of them.

Every day when I go out for my walk, it lifts my spirits to see the colors brightening and increasing. It must do the same for you when you look out on your backyard, especially when it's illuminated by warm sunlight! (As I type this, I'm watching snow falling here -- I'd much rather see green plants and sun right now!)