I shared some photos a couple of weeks ago from when Mary was over... here's the real deal! 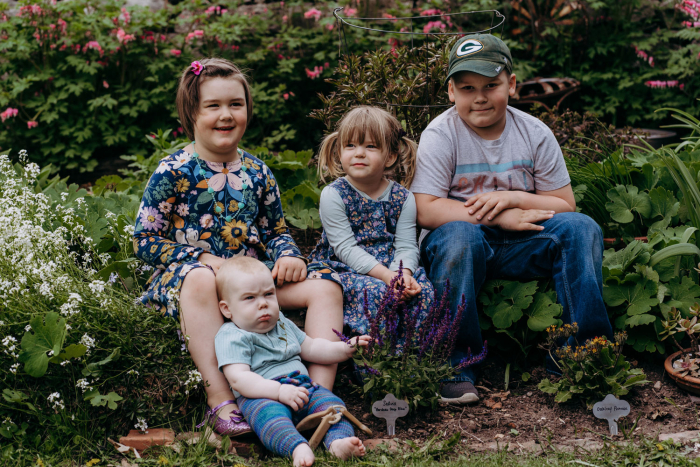 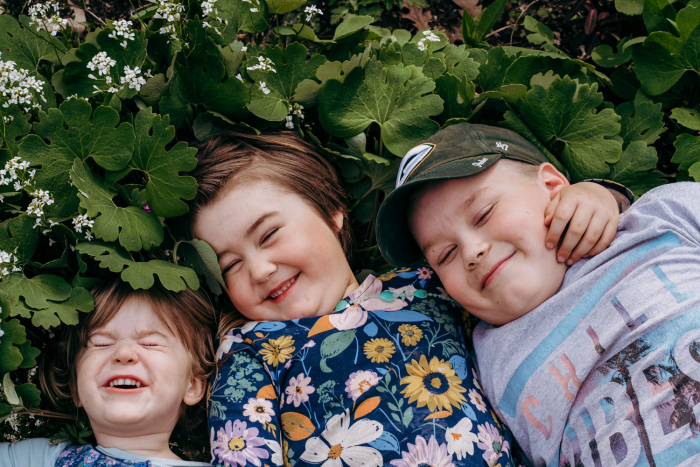 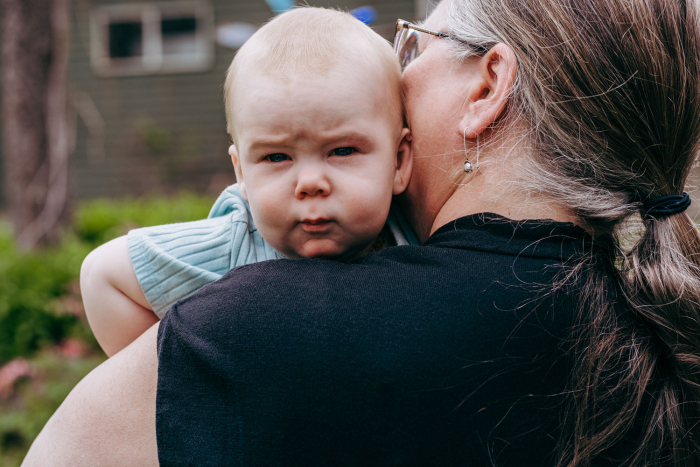 It was totally worth a bit of my garden getting smushed! I think that top photo was taken at the exact same time as I snapped mine. Poor Davy was not in the mood, having just awakened from a car nap, but such is life, eh? Mary gets it. I'm sure I'll share a few more images from this session in the near future.

I found a "present" this week as I was turning over the Airbnb for a guest arriving tomorrow. 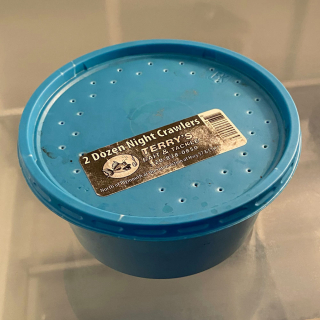 My first-ever container of night crawlers in the fridge! At first, I was wondering who I could give them to... and then I realized that I could return them to their natural habitat in my own back yard for our mutual benefit!

A moment for hosta appreciation... 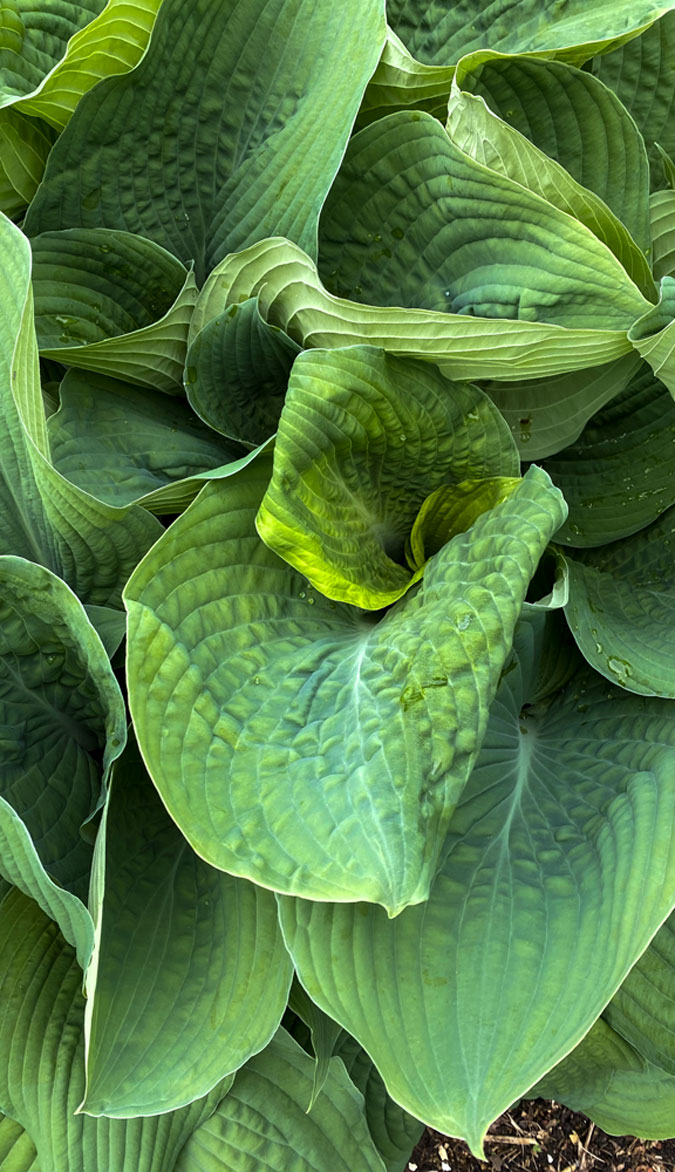 The color and texture just slay me... these were big fat purple-y/green shoots barely poking out of the ground a month ago.

PSA for IPA-lovers. I was delighted to find Bell's Light Hearted Ale in my grocery store a while back -- if I'm going to trust anyone with an IPA that's lower in calories & carbs, it would be Bell's -- and it tastes pretty great! 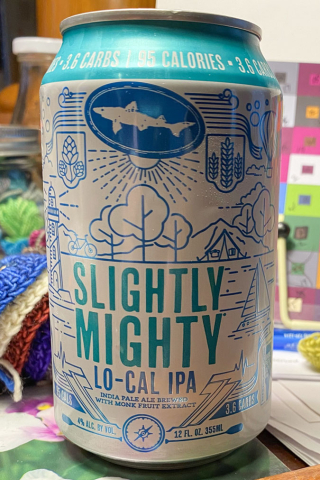 Occasionally, I peruse the aisles/coolers to see what's new... and sometimes I actually find something! And another brewery I'd trust with such a thing is Dogfish Head! This is also a pretty great tasting brew.

There has been some crochet progress... it seems a little slower going these days, but it's going. 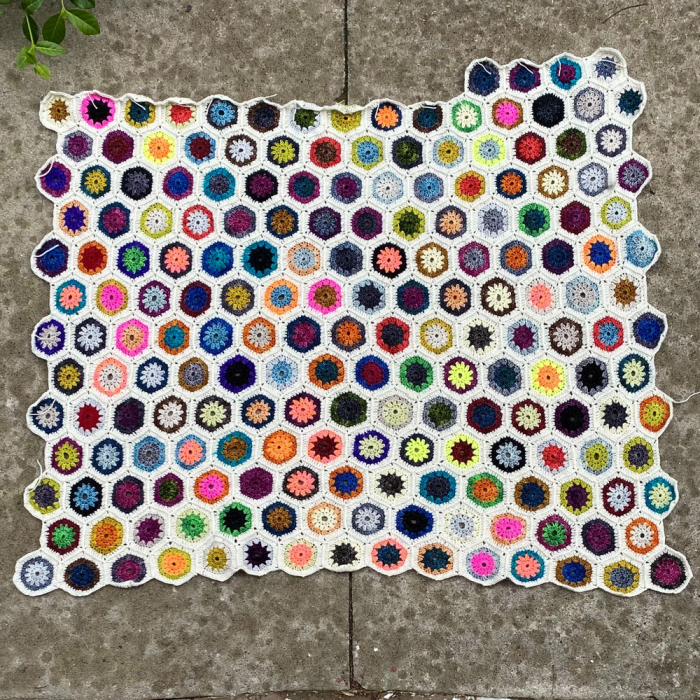 I knocked over my box of colors a while back and it took a while, going off of some photos I'd taken, to get them back in order. I had done a little switching that was never recorded, so it's all very random, and these couple of rows even moreso!

Finally, I am doing my first-ever successful read/listen, thanks to Kym mentioning that she'd done the same, with Shuggie Bain. She'd told me (and I know it to be true) that the chapters in the book don't always align with the chapters in the audio book, but they do in Shuggie Bain! I may not finish in time for the book club meet-up, but I am really enjoying reading this way, so who knows? I've also pre-ordered the audio book of Sinéad O'Connor's Rememberings. The To-Read list never gets any smaller, does it?

Oh those kids! Davey will always (in my mind) have a scowl on his face, but I love it - on him it's cute! The smiles in that second picture are just wonderful. I can hear the giggles. I love your crochet and each time I see it I'm reminded I need (want) to get back to my granny squares. I'm thinking they will be a nice "sit under the tree and while away the afternoon" project once work calms down (couple more weeks). I remember nightcrawlers in the frig...My oldest and youngest brothers were/are avid fishermen (the younger more fly fishing...but still...).

Davy makes me smile. All attitude.

That second photo is really going to stand the test of time. So much joy!

I love the photo of the older 3 kids laughing! And Davy's scowl slays me. We're big fans of Bell's Two Hearted, it's not easy to find here so when we see it, we grab it.

Davy's face gets me every time!

OH Vicki, those photos!! I saw "low calorie" IPA when I placed my Total Wine order this morning and laughed, and scrolled right past. I'm gonna go back and take a closer look. Also, Shuggie Bain is my next-up book. I have the audio, but no print. we'll see how it goes....

Darling kiddos. OMG I am listening to Shuggie Bain right now too and thought several times that it would help to have the book. I am loving it but I wonder if this book would have mass appeal-I have loved all the Booker Prize winners but I'm not sure if others would like it as much.

I like the DogFish Head Slightly Mighty as well. It is a nice light IPA and very refreshing. Your grands are just adorable!

I LOVE the photos of the kiddos! Mary is so skilled at capturing the kids AS THEY ARE -- which is going to be so much more meaningful and wonderful for all of you as they grow up than anything "perfectly posed." Such fabulous shots. XO Although I'll always choose a Two-Hearted over a Light-Hearted, the Light-Hearted isn't a bad option at all. (And let me say . . . I am so happy to be able to head back over to Bells now. Because there isn't anything quite like Two-Hearted fresh from the tap.) And I'm glad the Shuggie Bain listen/read "system" is working for you! I really enjoyed reading it that way. And I, too, am looking forward to Sinéad O'Connor's memoir!

Photos of the kids are always a mood lifter! Davey! So funny, so cute, so put out! I'm a big fan of hosta watching time. I have a big leaf hosta (name forgotten) that I just adore and another one that I've had in front of the house for nearly as long as we've lived here. It was one leaf the first year and is now 3 feet wide. Your epic blanket project is exciting to watch as it grows so quickly! It's going to be a lovely addition to your other epic projects!

Well, you’ve really opened up a can of worms!

The kid pix are adorable. Thanks for sharing!

LOVE THE PIX OF THE GRANDIES! Did your last guests leave you night crawlers?Ewww? not in my fridge Your hosta is so pretty- I miss the ones I had in OH, a whole bed of different types. I love when they bloom! Hexie is growing-so pretty. Hope you have nice guests arriving.