The lavender is beginning to bloom. 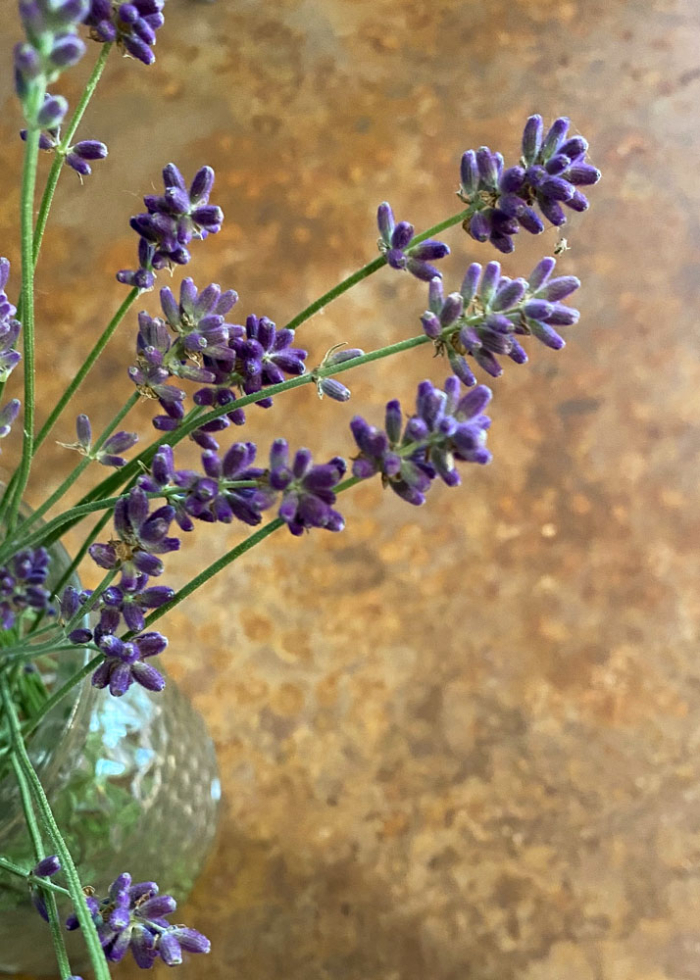 It's one of my favorite flowers and is, absolutely, my favorite floral scent. I spent a good while in the garden yesterday morning, and it felt good -- trying to keep up to the standard of Kate's excellent work earlier this spring -- except that all my great work in the garden must have really aggravated an already sore hip. (I reintroduced myself to my chiropractor on Monday and will see her again next week.) It was incredibly painful last night and I had a hard time falling asleep... resulting in a pitiful 4 hr 10 min of sleep recorded by my Fitbit last night.

Our accidental catalpa tree is putting on a glorious show! 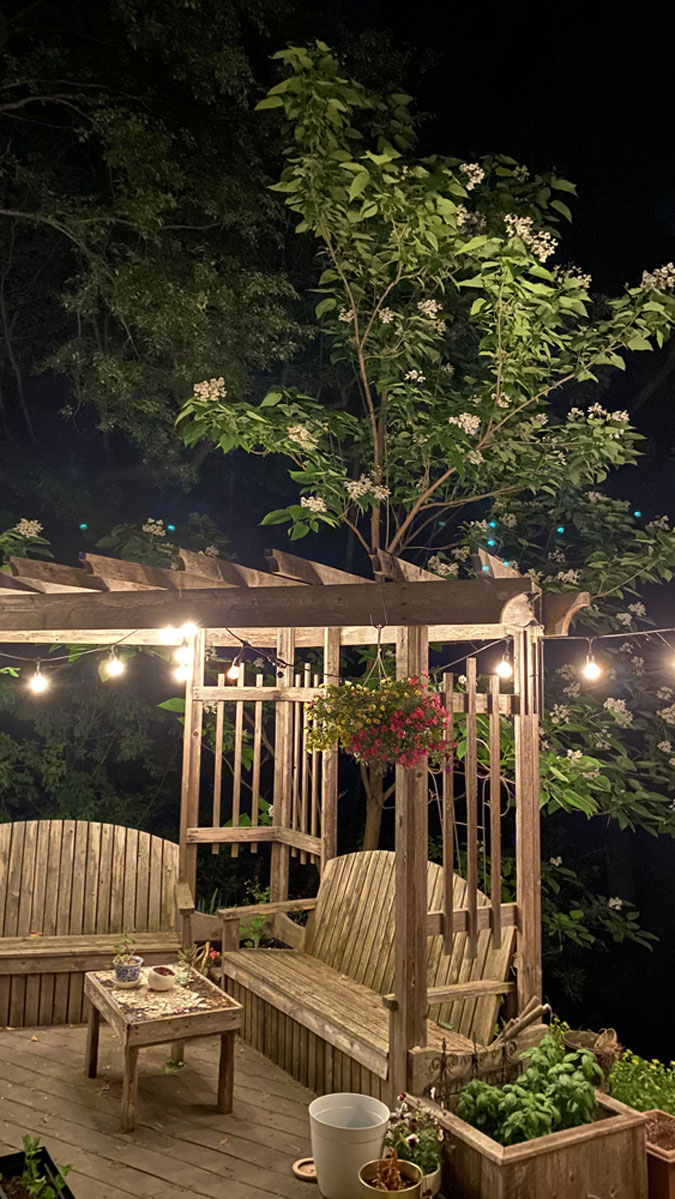 Even at night, illuminated by only the pergola lights, it's pretty spectacular... so many flowers.

I am really enjoying my current Airbnb guests. wink:wink 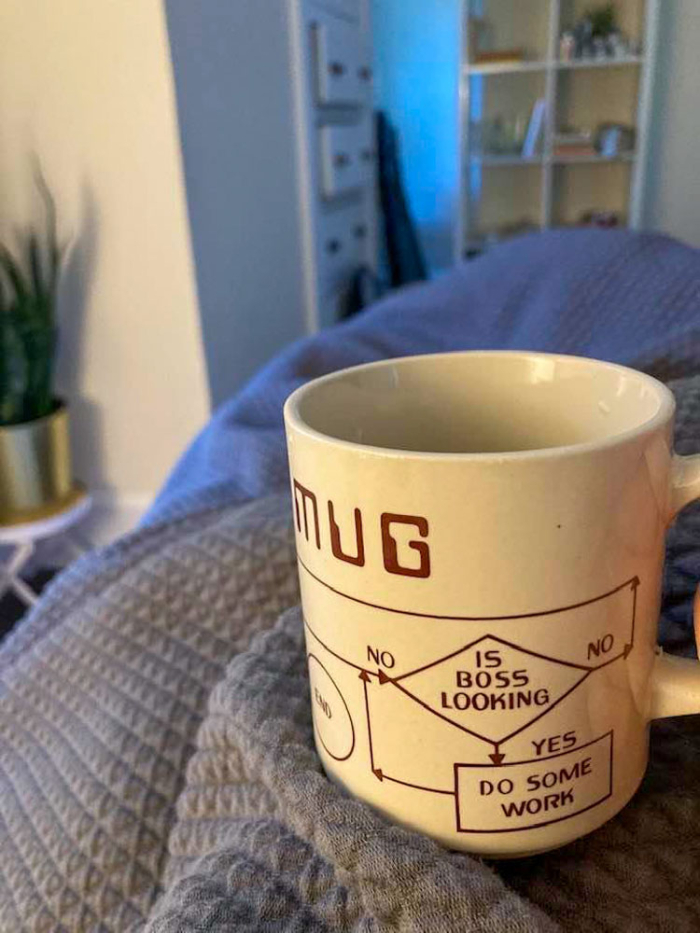 The feeling is mutual... Ann shared this photo the other day, starting her day with coffee in bed (we have the most eclectic collection of mugs up there!).

My sis & her family might possibly be more frequent guests in the future, since the local house purchase turned into a clusterfuck and the deal is off. There was some miscommunication -- in the form of NO communication -- which came to light a week ago after a conversation with one of the new neighbors. He remarked that there were 40+ families "involved," which led to Annie asking a few questions of her agent, eventually learning that the sellers' lawyer had JUST sent out the certified letters to those 40+ interested parties, to which they each had 30 days to respond, followed by another month before the title company needed to do their thing. Not only was this the first mention of all of this "involvement" (from the neighbor), but the closing -- having already been postponed once "because of the title company" -- was supposed to be TOMORROW! Tradespeople were lined up -- not an easy thing these days (especially since they were all "postponed" once already, too) -- and Ann had planned to be somewhat involved in renovation, at least overseeing in the beginning stages, and had also planned on staying there next month (roughing it, no doubt) prior to returning to Peru. The revelation of this new, previously undisclosed timeline made it clear that they'd be lucky even to close before departure. It's so incredibly disappointing to so many people on so many levels... I just can't even.

So, anyway, because of the layout & configuration of our house & the apartment, I've basically opened it all up and it's more of a house-share situation! They have their space and I have mine, but there's a lot of common area and we've been cooking & having most evening meals together. Sometimes we even share a little coffee in the morning before things get going. It's really nice and will be weird when they're gone and things are back to "normal" after next week.

Who am I kidding? WTF is "normal"? There's always something... it just remains to be seen!

Goodness but that's a wildly unprofessional screwup by the realtor. It seems like things returning to normal (including people doing their jobs well) isn't quite what some would have us believe. Glad they've got a place to crash and you're still enjoying the visit.

That house situation sounds awful, I'm so sorry that happened to Ann and her family. But it must be sort of fun to share your house with them!

I'm so sorry to hear about the terribly disappointing house situation. At times like this, I think of the quote from No Country for Old Men, "You never know what worse luck your bad luck has saved you from.” Whatever happens going forward, I hope it's only full of good luck for Ann and her family. Enjoy sharing the house and I hope your hip feels better soon!

ugh for the house situation ... and how wonderful you're close by, with room to share. still ... ugh...

Ugh, I am sorry about the house situation. They are lucky to have a place to stay for the time being that's so welcoming, and I'm sure you don't mind one bit having them around for longer than planned!

The real estate world is way off kilter these days. A sellers market is never, ever a good thing for anyone. I hope that things are settled soon. :)

Boy your description of a clusterfuck is quite accurate!! I am sorry that Anne and family have to deal with that.. Should the lawyer be reported????? Or the agent or both???
I am big on getting to the root of the problem these days...maybe it's what has gone on in the past 15 months but that is my thing..
Hope you have some nice time with them...looking for a house?? this weekend.

Ann must be really disappointed. Maybe the seller was pressured to discourage Ann from buying. Sorry to hear about your hip-that is not fun but the lavender and the volunteer tree are your rewards.