It's a little different this year -- they're all here earlier than usual and still working/in school, for the most part, plus passport renewals, vaccinations & haircuts, and Mack is doing his behind-the-wheel both with an instructor & with his dad -- but we're doing what we can, and squeezed in some tie-dyeing over the weekend!

We're happy as clams with whatever we get since we didn't even have a chance last summer! 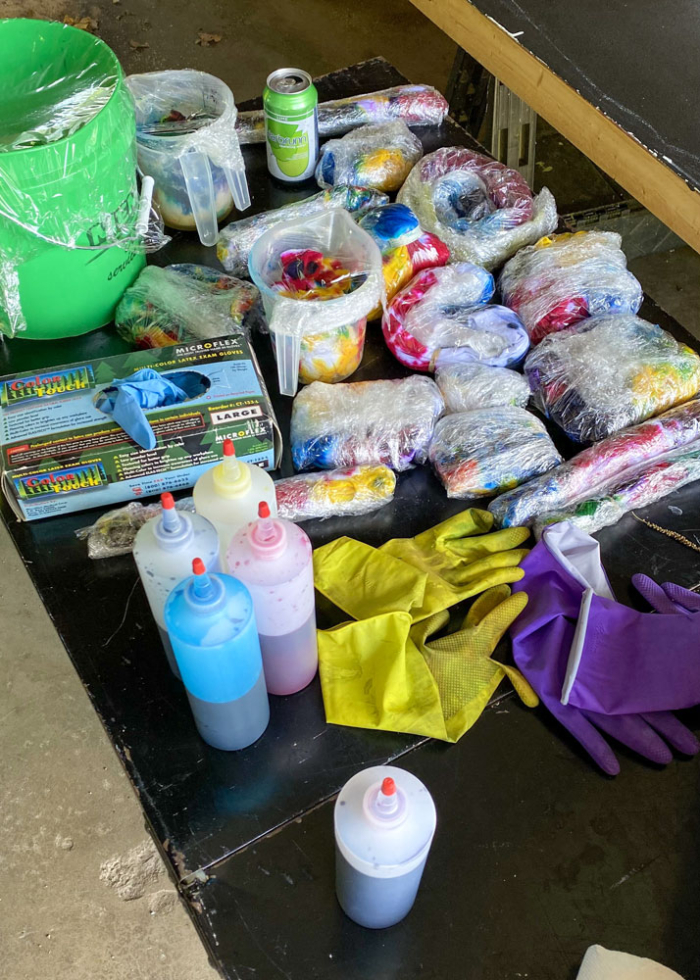 We tried a new technique using the measuring cups/bucket, but mostly swirls and pleats and sections... and a lot of shirts! 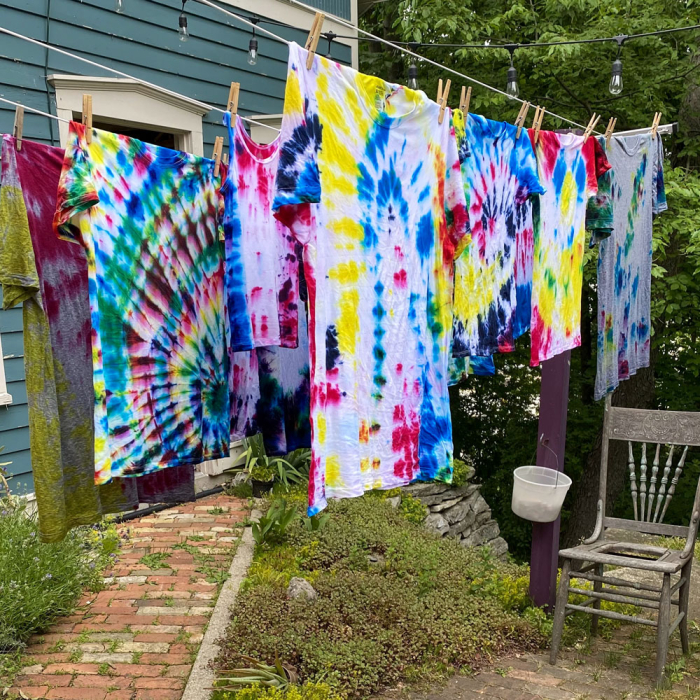 I might have left them set longer if we hadn't had a lunch date yesterday along with rain in the afternoon forecast, but at least I remembered to correctly mix the dye and to soak everything in soda ash solution. 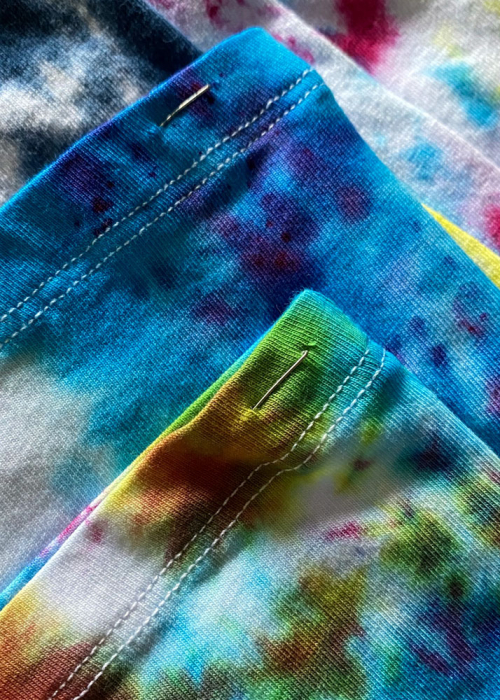 One of our biggest challenges over the years is remembering who tied & dyed what, so this year, for better or worse, I devised a system... putting a staple in the hem of each of Mack's shirts. I'm sure there's a better way (and I'd love to hear about it), but at least we were able to keep track of which shirts were Addie's & which were Mack's. 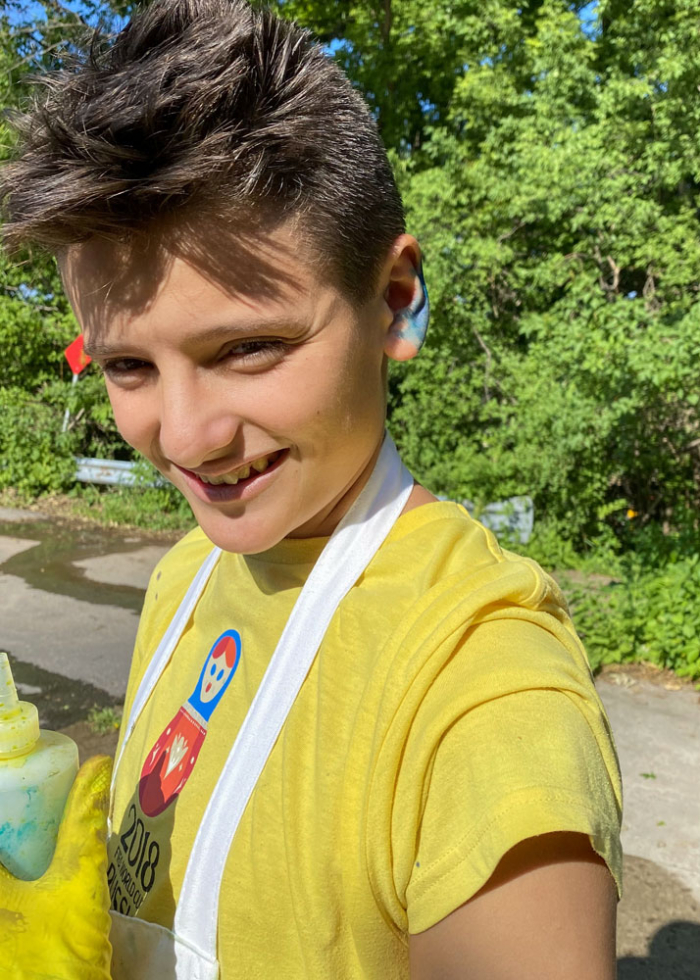 It was all official when Addie rubbed his ear... 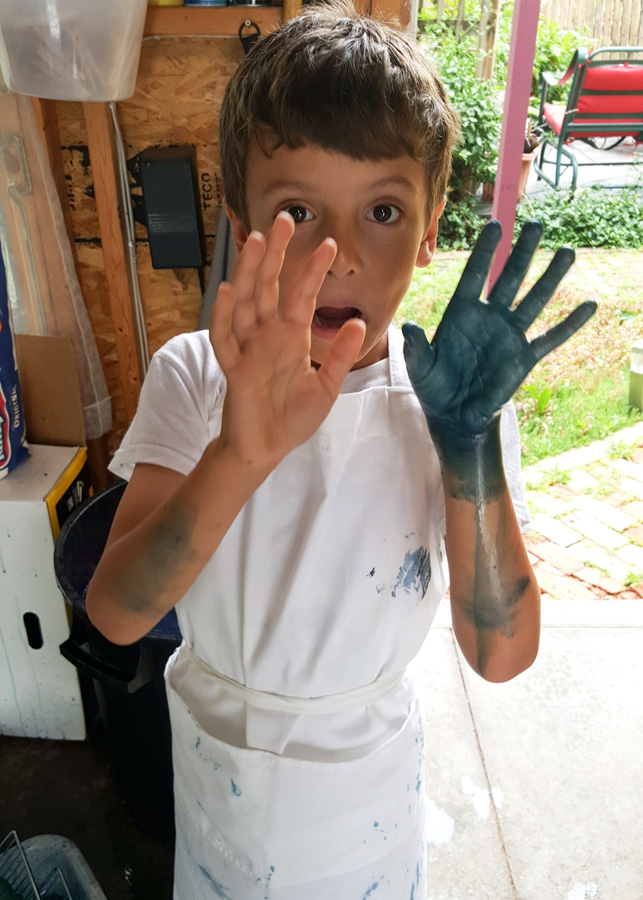 ...since the first Auntie Camp (indigo), it isn't official until someone (usually Addie) turns BLUE! Haha. (For the record, I have a very pink thumbnail!)

I photographed every shirt they made this year, so let's get started with Addie on parade! 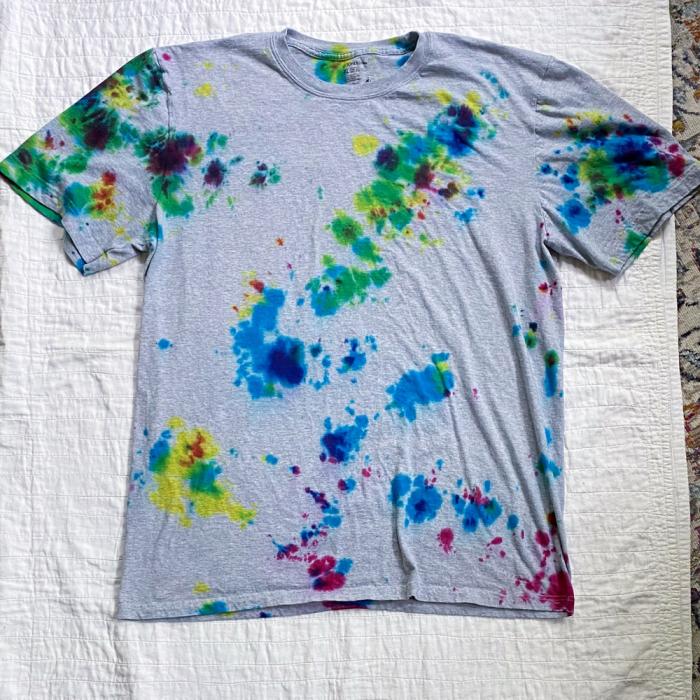 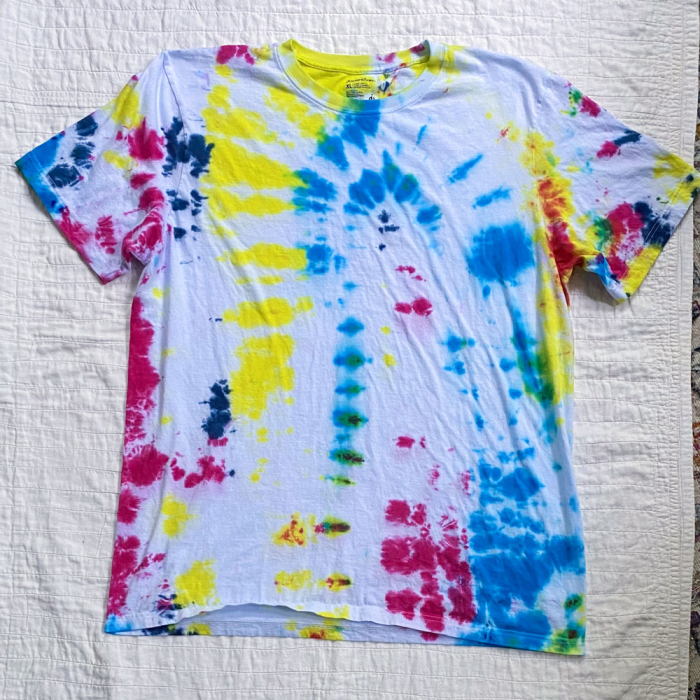 Two shirts for his dad. The first is gray and was done using the "crystal wash" method in the bucket. Basically, it's soaked in soda ash, scrunched up and stuffed into a container, and squirted with dye. The other one looks like a combo swirl/scrunch. 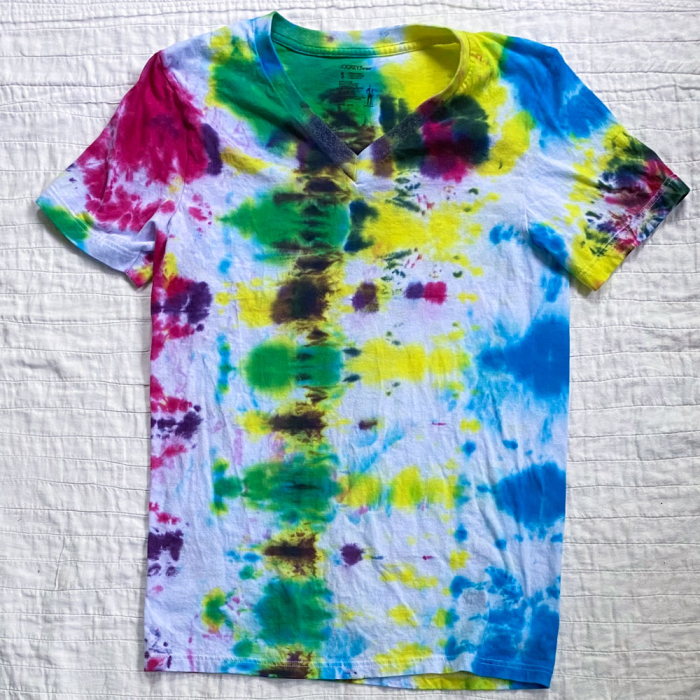 A shirt for his mom, above (I think I bought a size too small, but it'll "work") that was scrunched & sectioned. 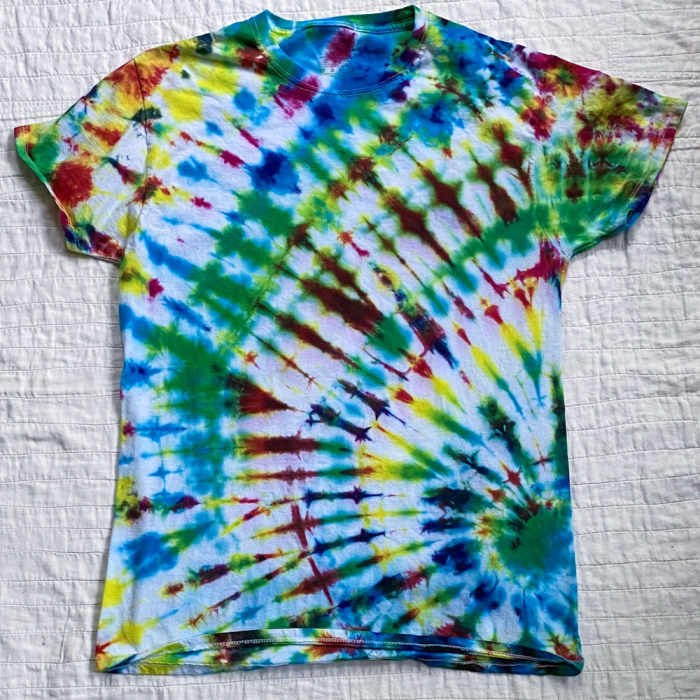 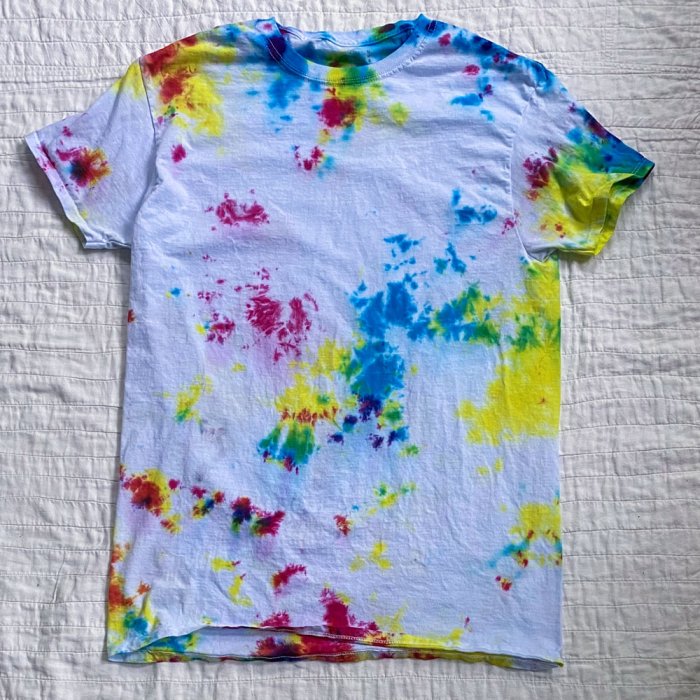 These are both his size. The first one was swirled from the bottom/side instead of the usual chest area, and it turned out pretty great (I'm sure that will be done again in the future!). The second was also done using the "crystal wash" method in a 4-cup measure... the dye is sparse but interesting. 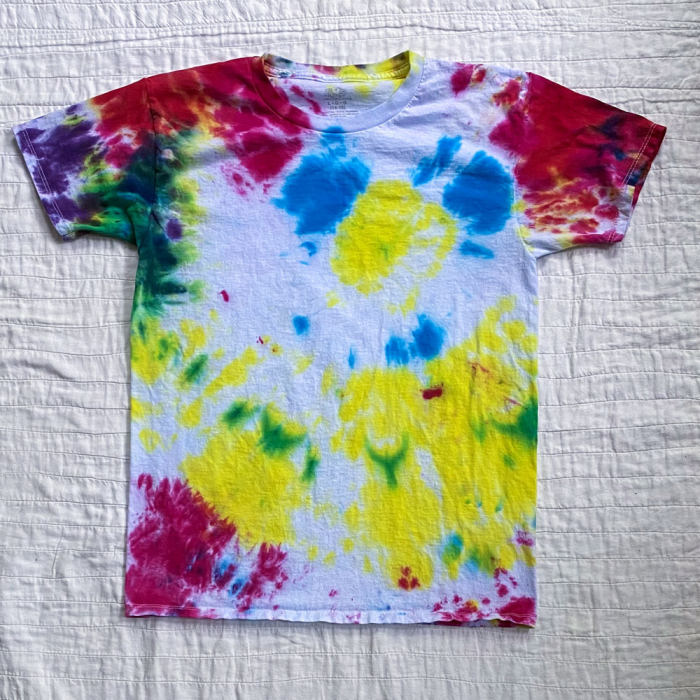 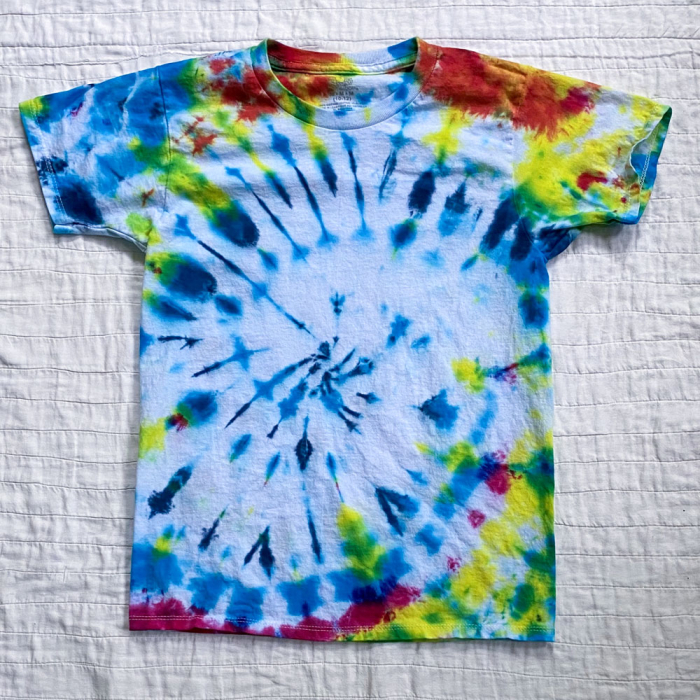 These two were done with Junah in mind, though I think the bottom one will be a bit small, so Ginny's! 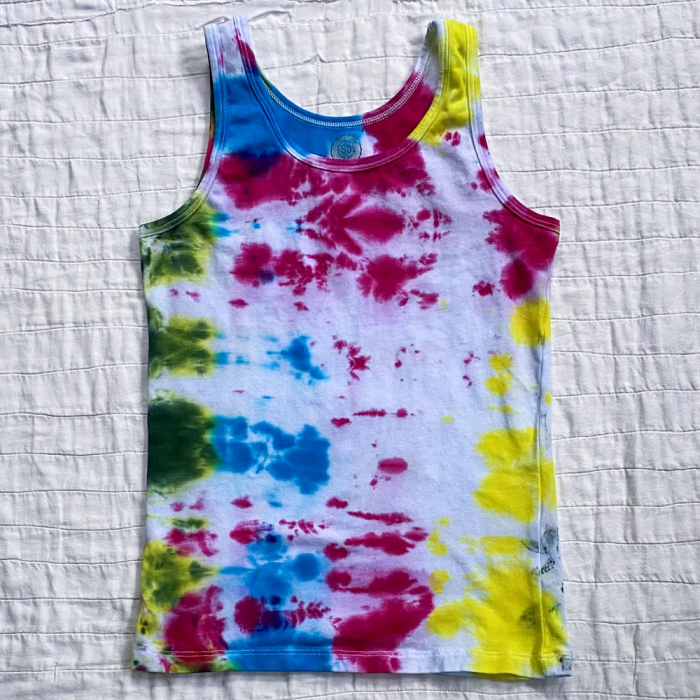 This one is definitely Ginny's. 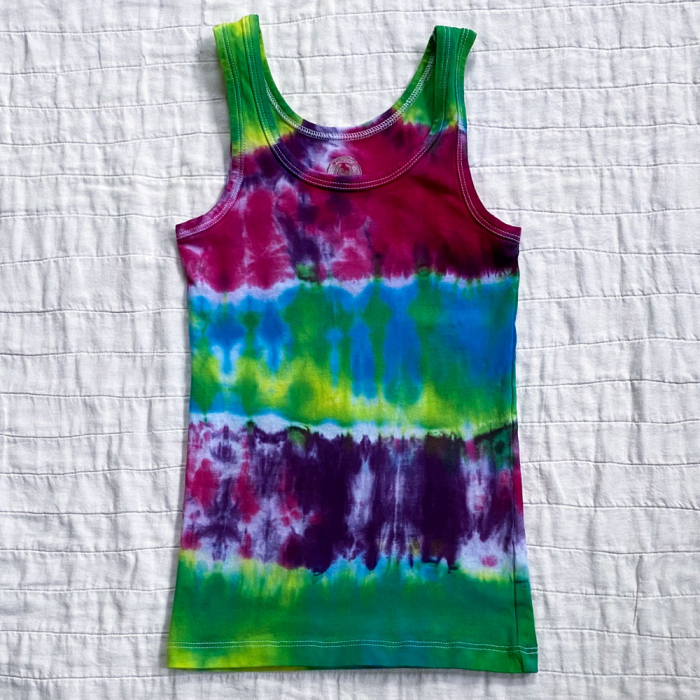 And, finally, Malina's. Parts of this remind me of the northern lights!

I love tie dye because there's always a little bit of surprise and it's really hard to make a dud!

This is great! wonderful/fun shirts and I love Addie's blue ear - LOL

You guys are definitely masters of tie-dye, even without Auntie Camp last year! These shirts all look great and I'm looking forward to seeing Mack's.
(P.S. I was going to suggest magic marker initials on the tags, but I see that your shirts are all tagless!)

Looks like you're off to a grand start. How fun!

I think everyone who's ever tie-dyed knows that you haven't done it correctly unless you've also dyed part of your body as well! These look like they were such fun to do. They take me back to summer camp!

This is just too much fun! What gorgeous shirts... one and all!

we dye shirts at summer camp. They have us us sharpie to put our name/initials inside the back neck. If you do it on the seam nothing shows thru the other side.

I have a sweater's worth of yarn in exactly the same colors as Malina's shirt -- the colorway is "Aurora"! https://www.ravelry.com/people/kmkat/stash/polwarth-2-ply