Does anybody know what time it is?

Lordy, what a week.

I can't believe that Brian & the boys departed only three days ago! 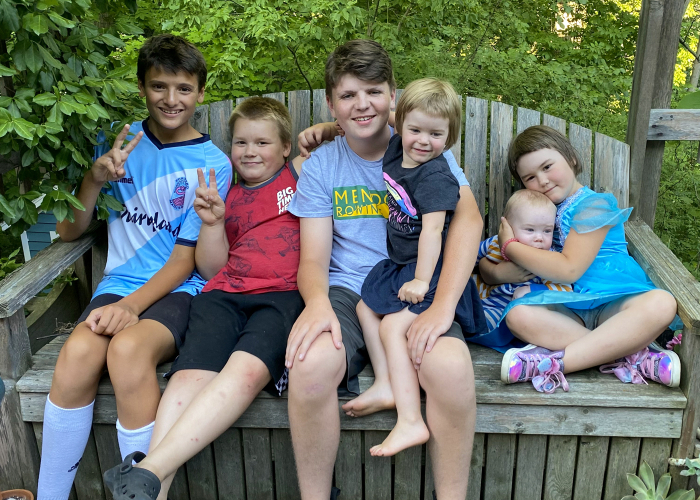 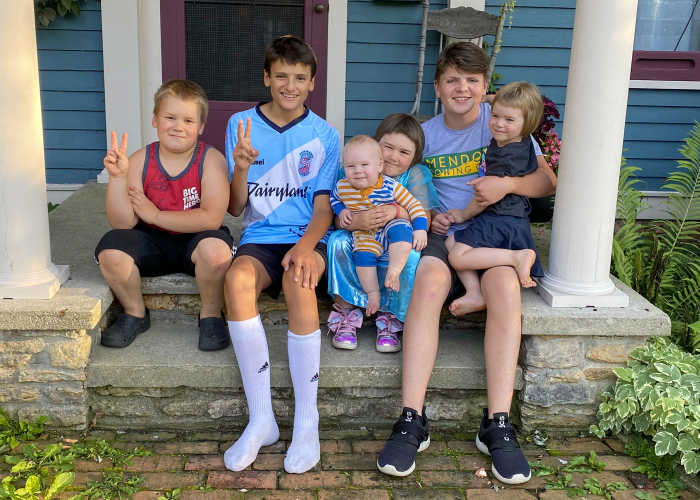 We were able to get the kids together one last time prior to departure. I love everything about these photos.

The boys saw the progress on their house, too, and approved. Next time, it'll be Christmas! 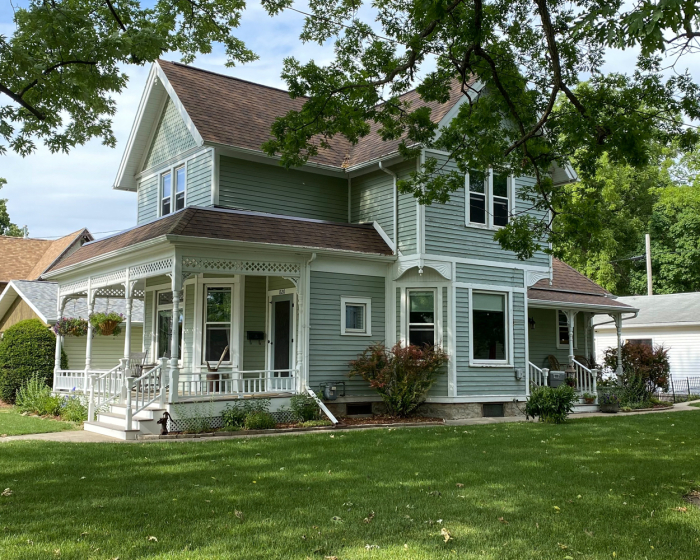 I don't think I ever showed you. I remember this house being transformed about 14 years ago. It had been painted a very dark gray and was a 2-family residence with an outside stairway (on the other side). The stairway was removed, there was a little reconfiguring of windows, painted this nice green, and completely transformed inside.

Many walls were removed, so the first level is basically open concept now -- behind me in this photo is the kitchen, to the left is a dining area, and to the right a full bath with walk-in shower; there's a nice big laundry room off the kitchen, and the back entry with basement access off of that. You can tell a lot about the original configuration of the first floor by the ceiling, and that post in the middle of everything... I would have done most of that differently (but, as my mother would say, "No one asked me!"). All of the systems were replaced then, too -- it's basically a brand new (14yo) house inside a 100+ year old shell. The siding & trim on the outside is original, and they used all the original flooring in the main room downstairs.

There are three bedrooms upstairs (all on the small side, two with nice walk-in closets) and a full bath with clawfoot tub.

This is the side porch & door off the kitchen. The whole house will get a repaint sometime this fall!

I've had a blast helping get things settled... taking deliveries, unpacking boxes, getting stuff set up, shopping! The house was immaculate inside and came with all appliances, so "we" could literally just move in. It's been ages since I had to set up internet & wifi -- it took a couple of tries, but I got it. I had just set up the TV & antenna when I snapped the interior photo above -- basically to send to Ann for scale, she was worried that the 55" TV would be too big.

Yesterday, Rusty helped turn some of this... 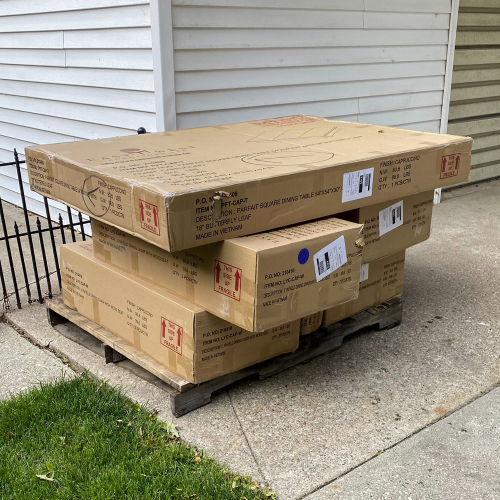 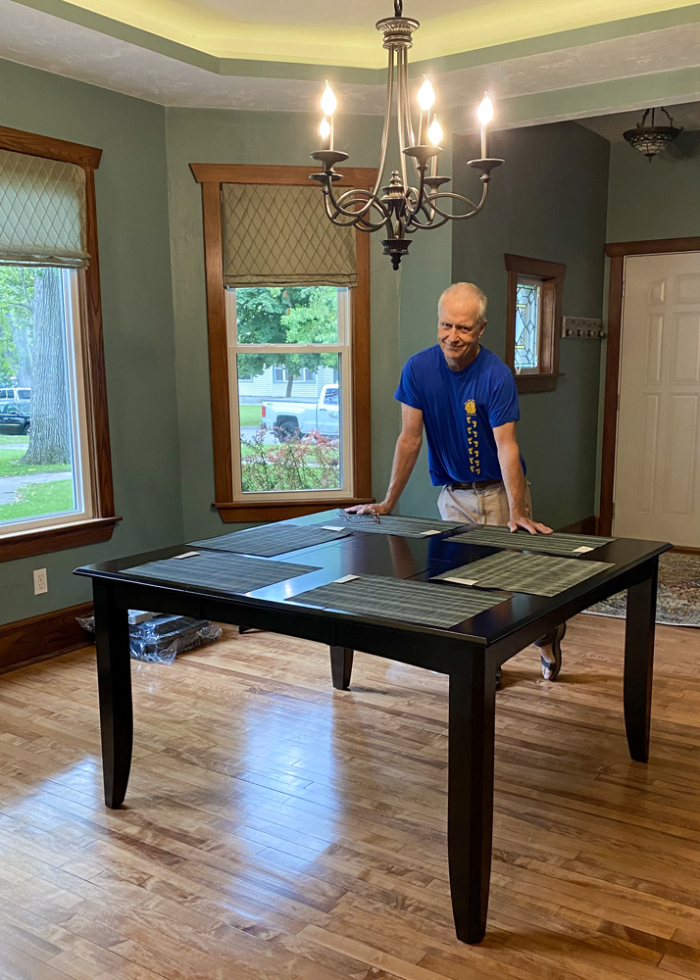 He helped assemble the table because it's so big & heavy, but I'll do the chairs myself. I really love putting stuff like this together!

So, I've been doing a ton of shopping -- besides my favorite big box & online stores, I've been stopping at rummage/moving sales, and going to all my favorite thrift shops again! "Thrifting" was a favorite activity that Kate & I did together, and I hadn't gone in the three months (!!!) since she moved to Scotland. It's great to have a list and be on a mission... 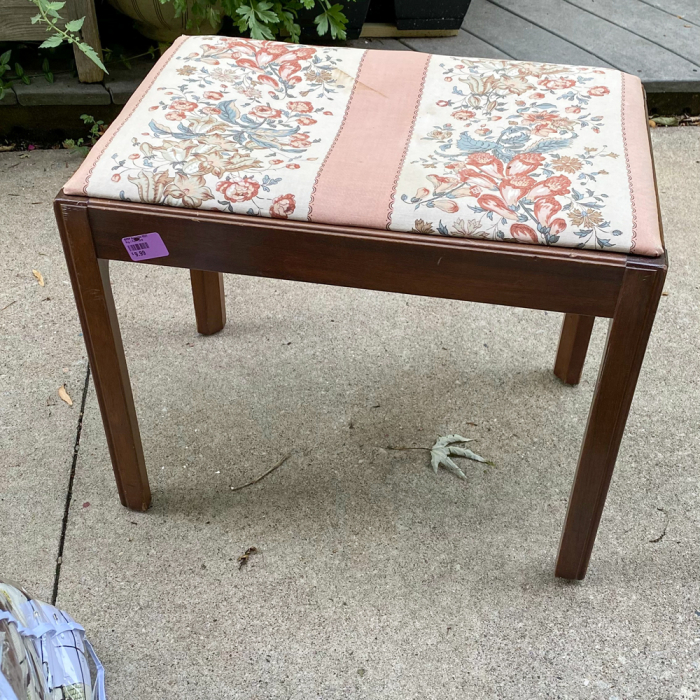 I found lamps, including a floor lamp, for $5-$15 instead of $50-$200, all with shades, and some even came with light bulbs! Nightstands, side tables, and decor, too. She'd been looking at luggage rack type things, but I found this old vanity bench for $10... 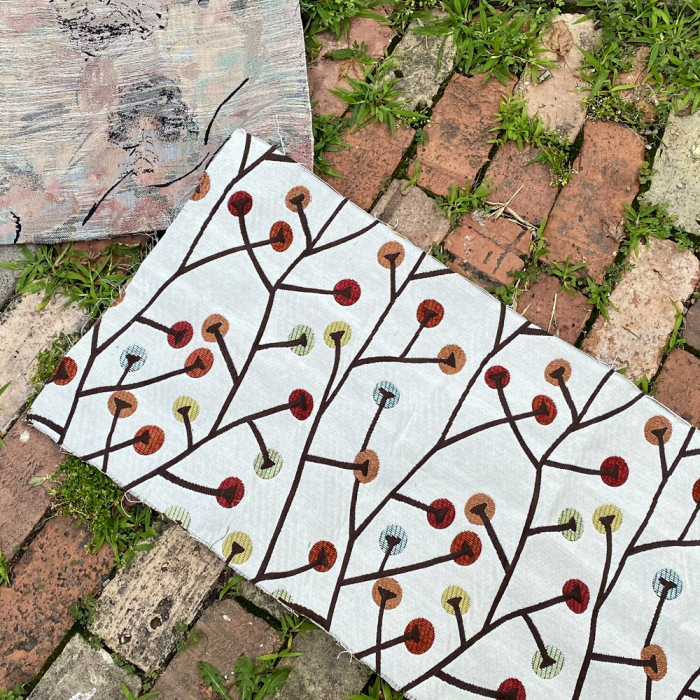 ...along with a huge bag of upholstery remnants, mostly in this pattern that I just love, and even with new padding material for the seat, it's still going to be way less than a new luggage rack -- with a million times more character!

Now I'm on the lookout for at least one more!

Of course, I also find things that I can't live without. 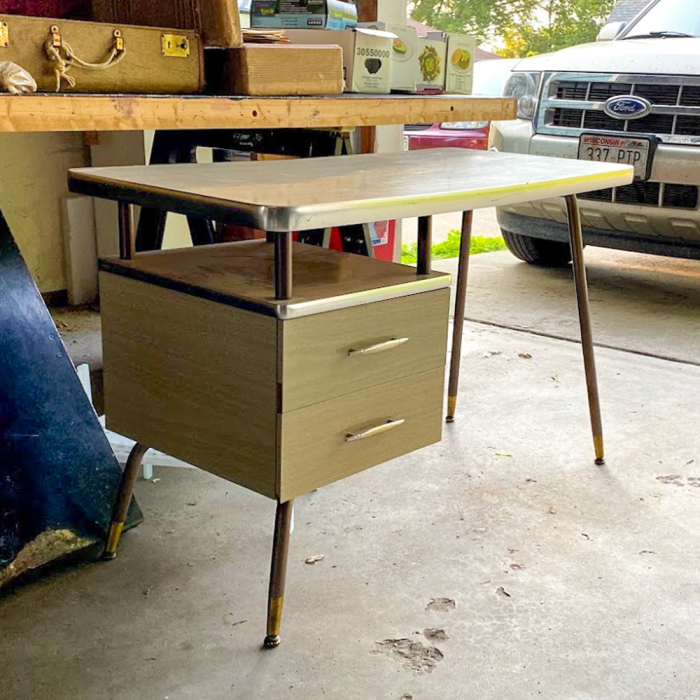 Like this desk! It came with a cute chair, too. 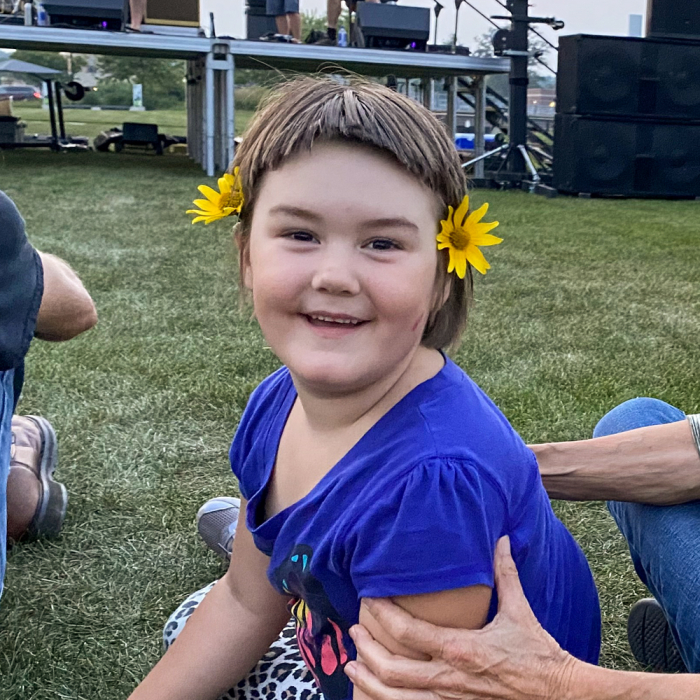 Ginny with flowers in her hair when we were at an outdoor concert (featuring her dad & uncle as band members)... I had flowers in my hair, too, as did her mom and sister and other grandma!

Ann's house is wonderful! I think a new house inside an old shell is the best type of old house to have. You are the queen of thrifting and decorating, and it seems like this venture is a win/win for everyone involved. What an adorable flower child Ginny is!

Wow! Ann's house sounds like a great find. And you do a really amazing job of putting unusual things together in the way that makes it eclectic, not "early garage sale". LOL Wish I had that touch.

I hope you're starting to get settled again and SO FUN to be working on Ann's house. Gosh, it's looks great!! and even better that you have a "real" excuse to be thrifting again ... that bench ... that desk!!! I'm looking forward to all the reveals. and to more adorable Ginnys :-) Happy Friday!

Oh my!! I am so envious. I absolutely love the house. My antique house was in Mississippi but it was only 1 floor. I do love yours. I miss mine. oh well. I'm glad it is coming together for you and you are getting to do what I do best.....thrift/garage sale/estate sale.....SHOPPING!!! Have fun but don't tire yourself out too much. Thanks for the pictures. Linda

That looks like a really great house and fun project for you, too! Thrifting with a purpose is the best kind of thrifting.

What a cool house! I'm also in awe of your abilities to fix up the thrifted finds you've brought home (as I was when you fixed up the camper)!

What a beautiful home and it must be fun for you to decorate it for them. I too love that fabric you found and hope you plan to use some of it in your own home as well. Have a great rest of summer.

What fun!!! What fabulous finds!!! The house is just simply grand Vicki - love it and you must be having a ball shopping and decorating (LOVE that fabric you found). Great pictures of the kids too. Love Ginny as a flower child.

What a charming house! I just love it! And you're doing such great things with the interior. Fun. Fun. Fun. (Okay. The fabric for the bench? YES, please!) And . . . Ginny! I love the photos of all the kids -- but that Ginny-flower-girl photo just steals my heart. XO

What an adorable house, Vicki! I love the little decorating touches you are doing as well! And thrifting for the win!! You win that award this week (and maybe for the entire month of August!)