Scenes from a weekend
Good morning from Down Under!

It's slow going, but it's still going... Hexie Love (Rav link)! I meant to take a photo but, really, it's not changed that much since last time I posted. I usually try to do a little hookin' in the evenings, but lately we've been watching Nordic Noir and attention is divided between my project and subtitles (currently watching The Bridge on Amazon Prime).

I thought I'd use this post, instead, to show my recent upholstery/recovering job. You may recall that I'd purchased a vanity bench for $9.99 at St. Vinny's a while back, and also scored a bag full of upholstery scraps for another $3.99. Here's the "before" bench: 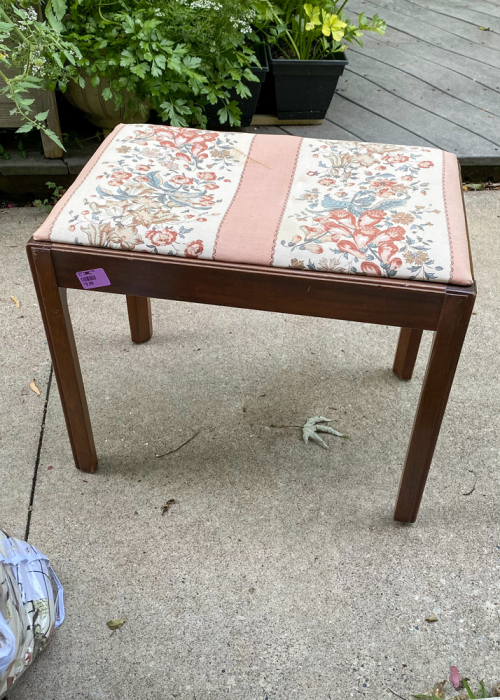 Turns out, that fabric was just pinned on atop an older cover. 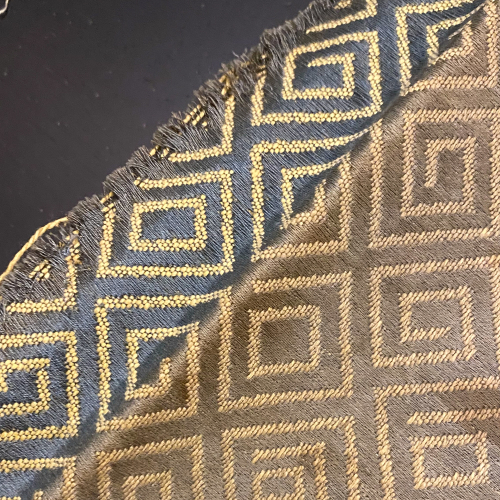 The faded and stained original fabric was atop another layer that was more like muslin, and under that was... horsehair, probably a little straw, and webbing. 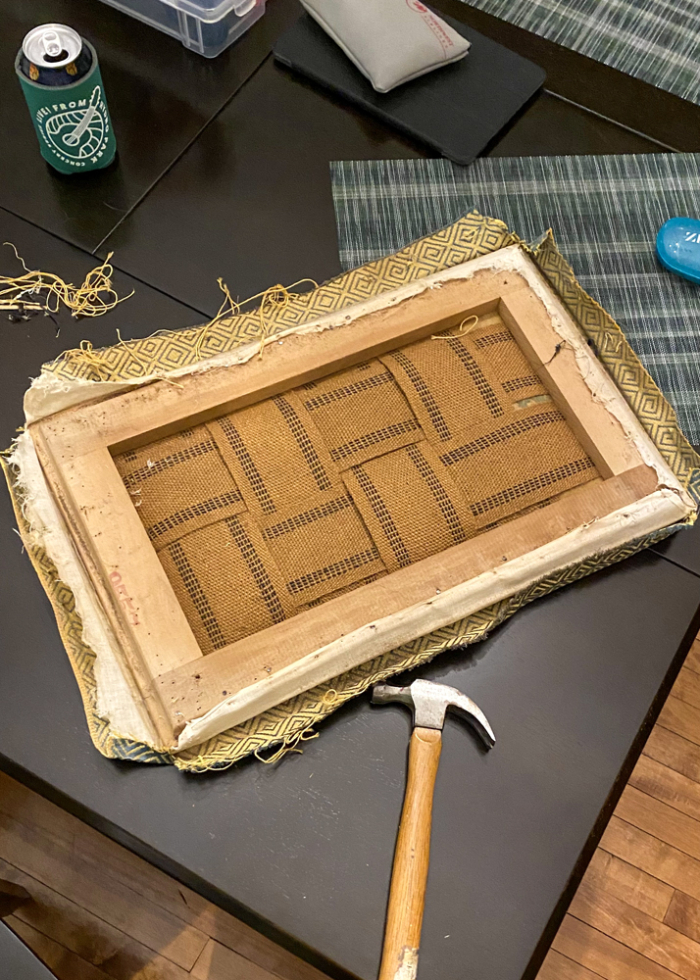 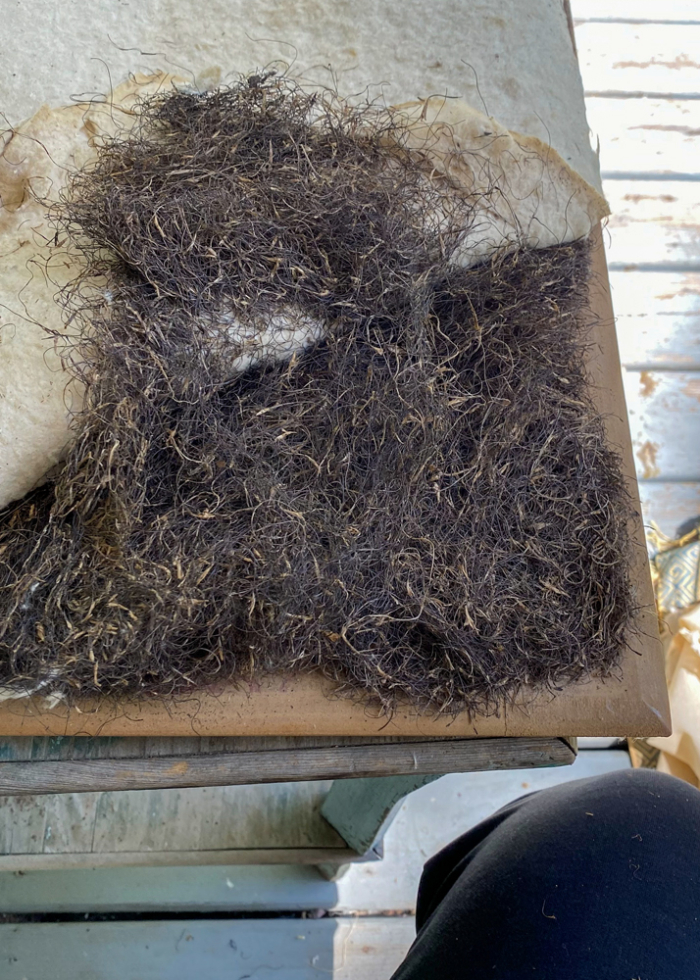 I had to move the whole operation outside... it was getting messy! I took a bunch of pics and sent them to Ann, picking her brain about how to proceed (she worked for an upholsterer in high school). 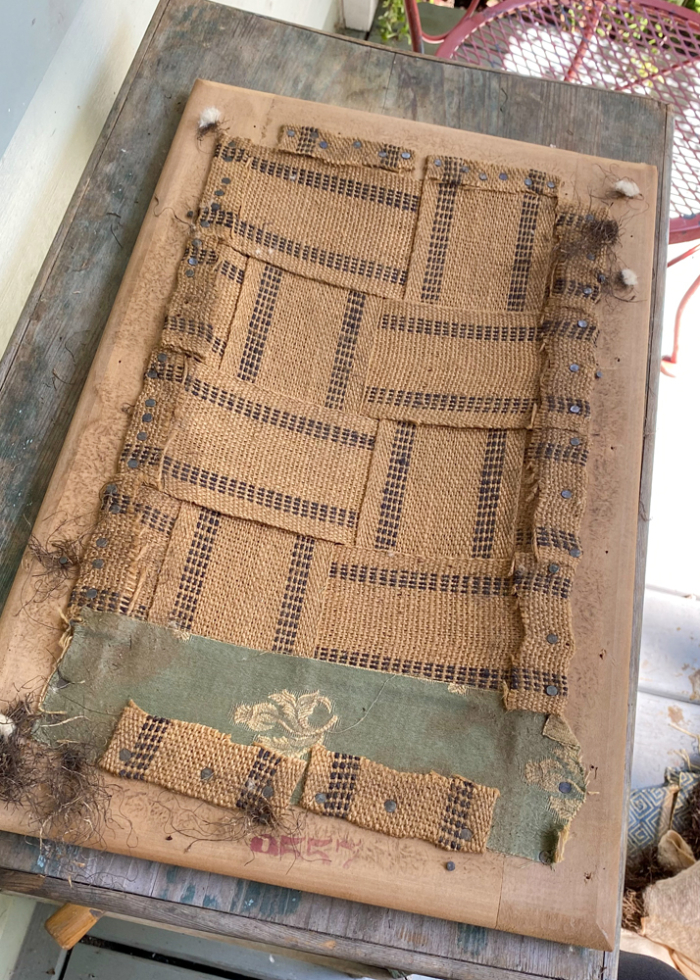 She suggested to get rid of the webbing altogether rather than trying to tighten it, because that's pretty difficult to do without the proper tools. And likely one reason it had such a saggy bottom to begin with is that someone had already tried to repair the webbing. I pulled it all apart and now have a lot of upholstery tacks!

Rusty cut & attached a new solid bottom under the seat frame, which I filled in with some styrofoam (plenty of that around from the dining room furniture delivery), and topped with a new piece of 2" foam. Then I stretched & stapled a remnant from the upholstery grab bag over the top. 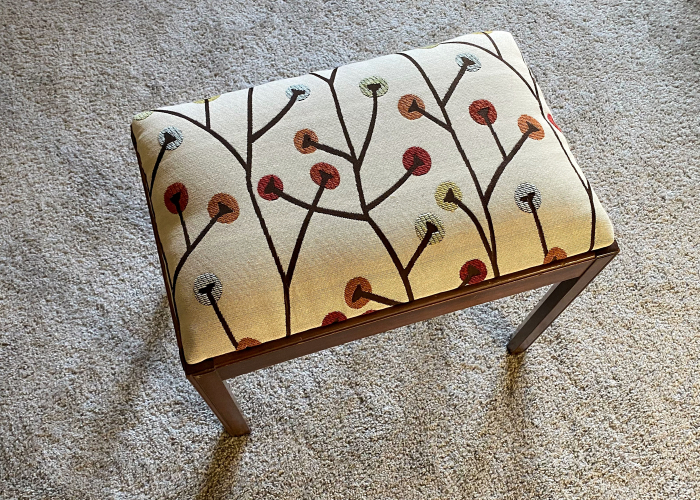 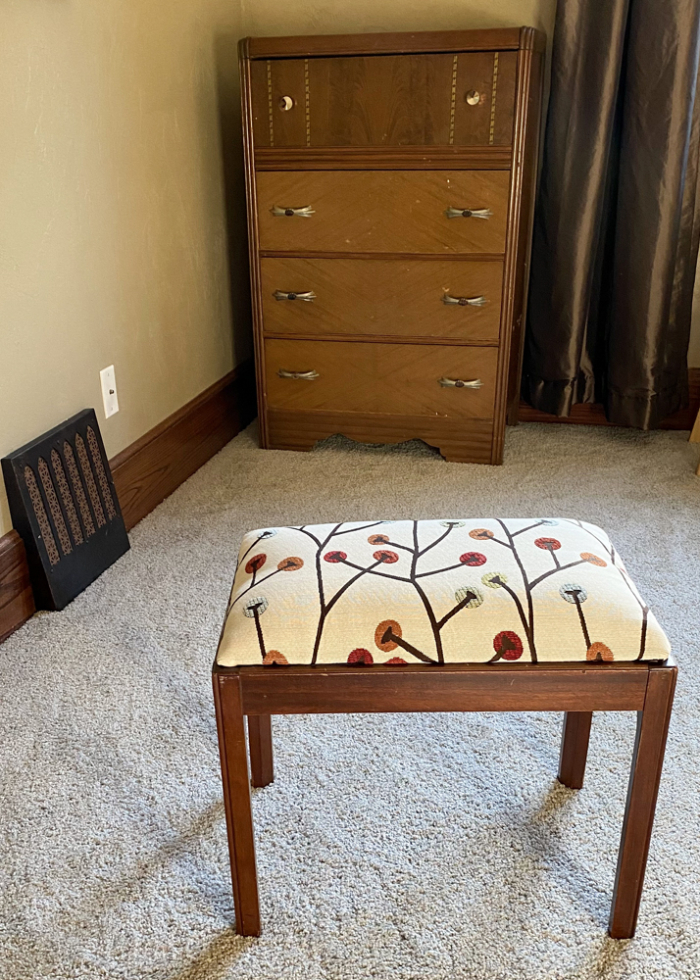 It turned out pretty cute. There was a lot of that fabric in the bag, but turns out most of the pieces were trimmings -- 6" by 100" or in that area. There were only a few with dimensions even close to workable for this project, so almost anything else I do with that is going to have to be pieced.

I still want to make a couple of pillows, and we'll just see how that turns out.

I'm still working on The Lager Queen of Minnesota: A Novel. Is there a reader slower than me?

I attended my first in-person book club last week, and the new book is The Woman They Could Not Silence: One Woman, Her Incredible Fight for Freedom, and the Men Who Tried to Make Her Disappear by Kate Moore. I'm listening to that one, and just started on Monday (when I drove down to pick up chickens), so far so... good? What a story.

Subtitles do make it tough to simultaneously work on projects. :-) I think you have a real talent for seeing potential, putting things together, and decorating. I love what you've done with Anne's house so far, and look forward to seeing more. That bench is cute, and I bet you'll be able to do something creative with the oddly-shaped scraps.

You are a miracle-worker. That vanity bench is completely transformed. I agree with Bonny, you do have a real talent for refurbishing and decorating.

L.O.V.E. your upholstery success!!! I have done a fair amount of that very thing myself and so I do love to see what others do. I recovered 8 chairs for my granddaughter for her wedding gift as she inherited an old dining set from her other grama!. Lots of fun and lots of staples, tacks and foam!
Look forward to seeing your afghan. I am not a crochet person so I live vicariously through those that do it well.

Such a gorgeous transformation! And if you only get the fabric for that bench out of the sack, you still made out like a bandit. But if any of the fabrics go together, you could make some fun pillows. I might think about strips/stripes instead of squares patches. A little more modern and minimalist for today. What am I doing suggesting things?! I could never have done that bench, so I'm sure you'll make something amazing.

The vanity bench is fabulous Vicki! You certainly have a knack for decorating and re-doing things. The fabric reminds me of some Danish designs/fabric I have seen. It is just so pretty. Thankas for the book recommendation too - I've added it to my list (I enjoyed Kate moore's book "The Radium Girls" a lot). Congratulations on already having bookings for Ann's Queen Anne!!

Wow, that new cushion looks amazing! I really like the fabric, and you did such a professional job! I'm so impressed by how handy you are.

Your new book club selection looks really interesting and like something I'd enjoy. I read and like Radium Girls, so I'm putting this one on my TBR list, too.

What an amazing transformation, Vicki! Wow! I love the new and improved little bench! Your new audiobook looks very interesting. I am off to see if I can find a copy at my library! :)

Okay. So that horsehair would probably have freaked me out a little bit and maybe stopped all forward momentum on that kind of recovering project for me! I'm so glad you continued on and found such a splendid way to re-make the bench. It looks FANTASTIC. Nicely done! (And that fabric just makes me smile every time you post a photo of it.)

The vanity bench looks amazing, brand new, in fact. It's such fun to see how you've transformed Ann's house.

That is lovely! Great job!

what a transformation! (and not just that bench :-) Those hexies will still be there this winter, and maybe the TV offerings won't be quite so distracting then.

What a wonderful transformation of the bench. The fabric is so vivid and pretty. How are you liking the Lager Queen? I liked learning about beers and how her feminism was received. I'm on the wait list for The woman who wouldn't..... Now I'm listening to The Round House about native Americans in current times.