Good morning from Down Under!
It's been a morning

Weekending: Fit for a Foodie

August was intense, and I was even more anxious when I realized that there was at least one event on the calendar for every weekend of the month! A baseball game, a wedding, a belated wedding reception... not to mention all of the work to get Ann's house ready (the first guests checked in last night!).

The month could not have ended on a higher note! I realize that it's not over yet, but for all intents & purposes (I'm never going to write that now without also wanting to add intensive purposes!), IT IS OVER!

I have no photos, but on Friday night Rusty & I attended an opening for an exhibition called Made To Order at the Trout Museum of Art in Appleton, featuring 55 pieces of art commissioned by museum supporters. The museum connected artists with buyers who then met to discuss the piece(s) that would be created, sometimes meeting numerous times. The artists received 50% of the agreed on price, and the museum received the other 50%. Then they had a $200/plate fundraising soiree to celebrate it all! We did not have to pay that, thank god, and it was definitely not the normal crowd that I hang with, but oh... the provisions! Champagne & specialty cocktails flowed all night; there were lobster rolls, shrimp cocktails, tuna poke bowls, tenderloin bites w/chimichurri, and a bunch of other delicious bites that I can't even remember, along with desserts that included macarons and the most adorable little crème brûlées! The catering was by Zuppas, a long-time local favorite, and they did not disappoint. 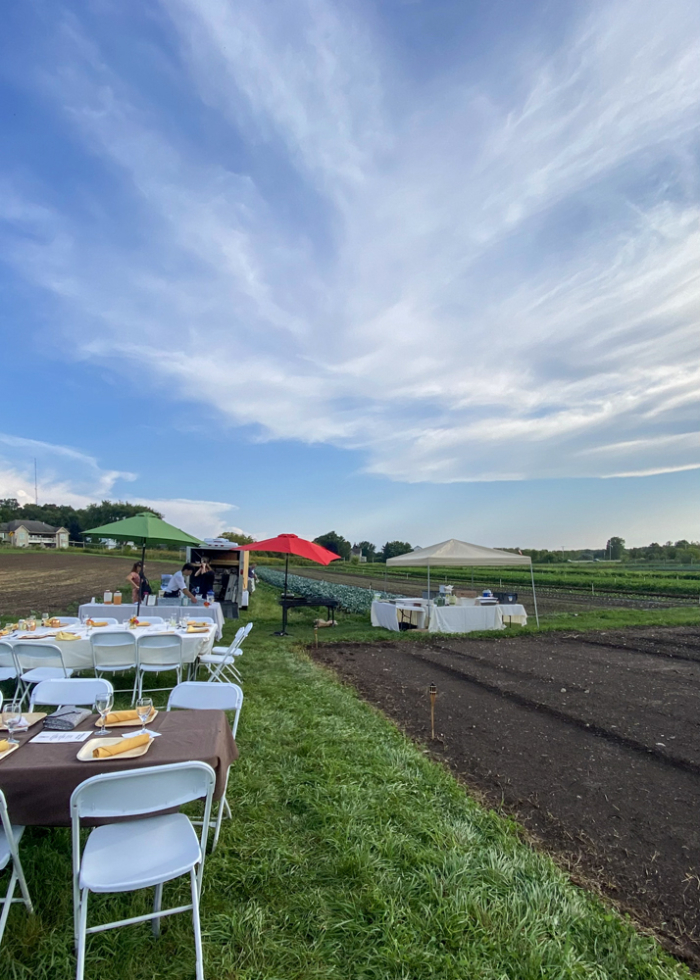 If that wasn't enough, Saturday night was the cherry on top! I have sung the praises of my CSA farm before -- starter plants & herbs, fresh chicken, not to mention the veg -- but the Farm Dinner, oh my.

I attended my first Farm Dinner at Park Ridge Organics in 2014. I remember it exactly because, as I stated in the opening to that blog post, "I've been saying 'yes' to almost every good thing that comes my way this summer..." That was the summer that my mom died and I felt an urgency to live and do things that made me happy. 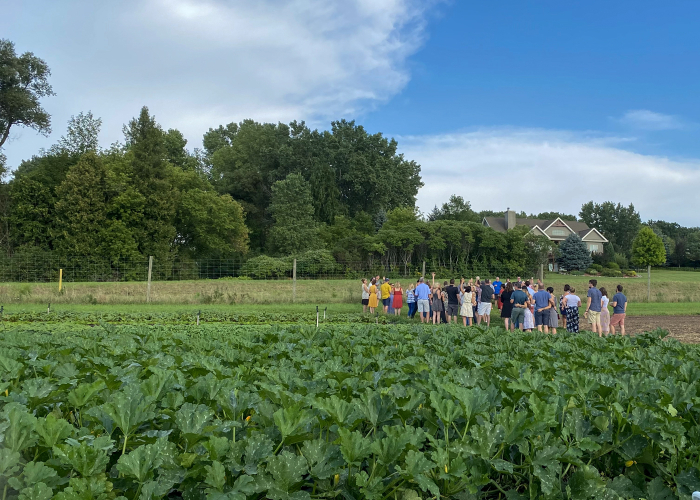 At that time, Park Ridge was not my CSA farm, but it wasn't long after that I jumped on their ship and I could not be happier. I love everything about my farmer, her story, her family, her location, and especially her food! 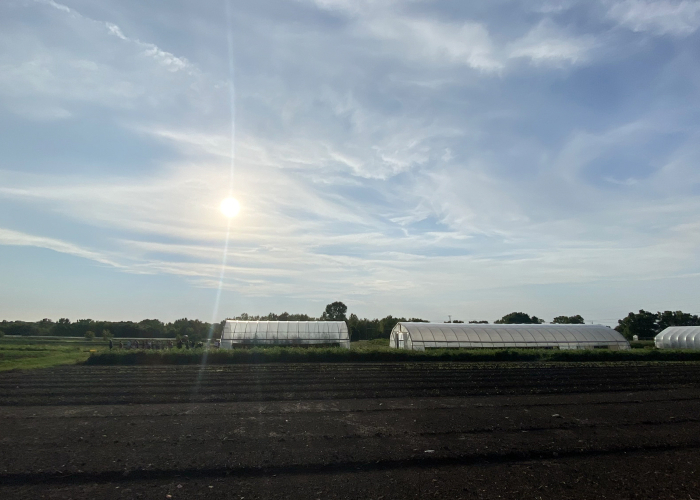 The dinners fell off my radar or the timing wasn't good, or whatever (stupid pandemic), until this year. This year, there was no question when I saw that the meal would be prepared by Dave Swanson of Braise. I could not order tickets fast enough! I don't remember know why, but Dave and his restaurant/events/school have been on my radar for years.

Seven years ago, the farm dinner was moved into the barn because of weather. This year, weather was definitely on everyone's mind -- we'd had a ton of rain on Friday night and storms/showers were skirting the area, but we ate field-side and barely felt a drop! 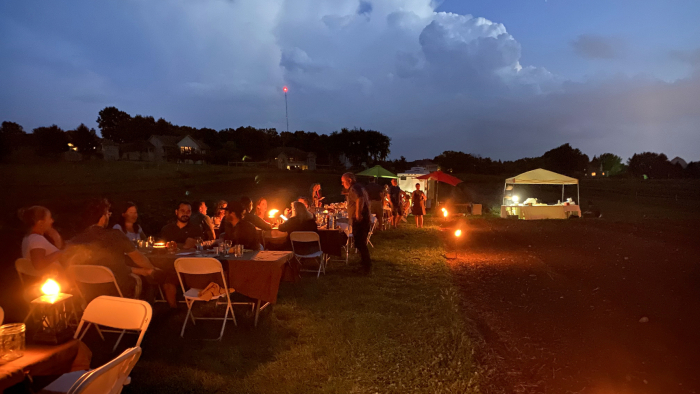 All the food was prepared outside, Dave came and visited at each table a few times during the evening, as did the farmer, the farmer's daughter, and the farmer's parents, whose farm this was originally and who now live next door in "the shed." 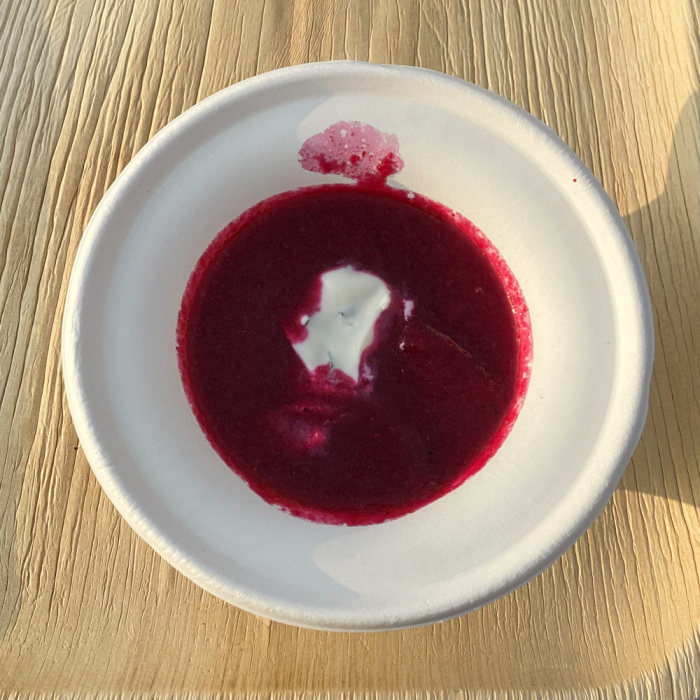 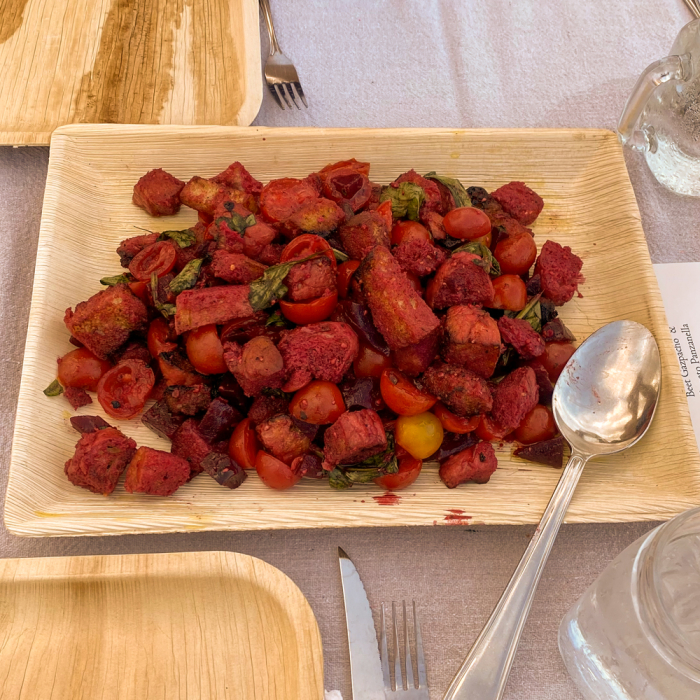 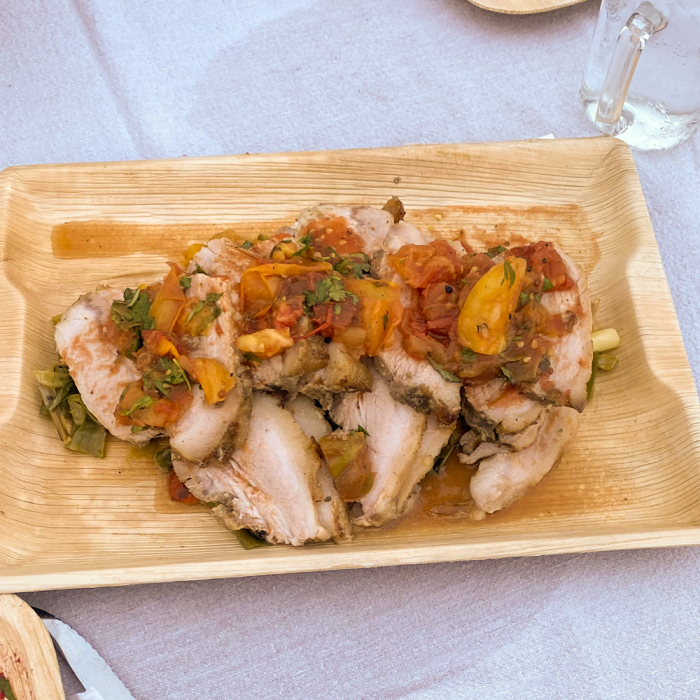 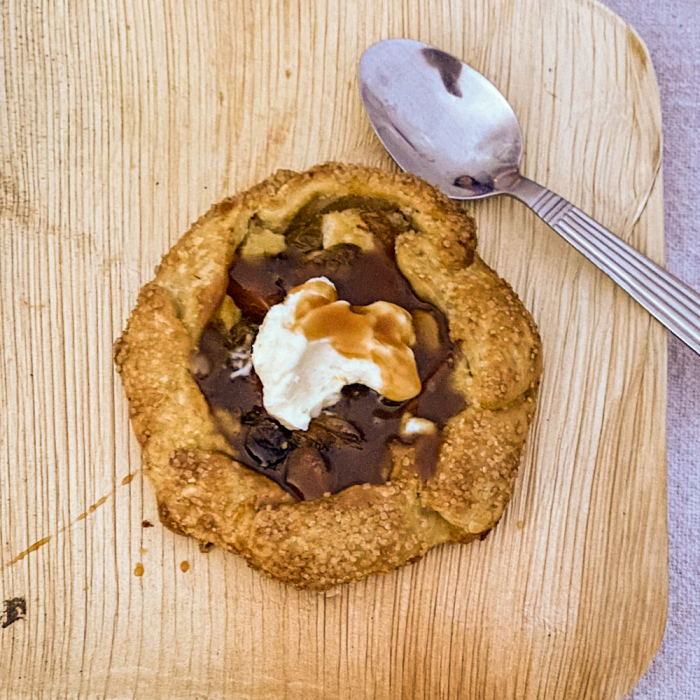 1) Beet Gazpacho. 2) Beet & Tomato Panzanella. 3) Porchetta with Roasted Vegetables & Lentils. 4) Carrot Cream Cheese Galette with Whipped Mascarpone. (That galette looks weird because it was getting dark by that time and I had to photoshop.)

It was all amazing, but especially that panzanella... I can't stop thinking about it!

I attended again with my friend Ann, and we had lovely table-mates -- sisters from southern Wisconsin, one who owns & runs, along with her son & daughter, the Hon-E-Kor Country Club in Kewaskum (where I will definitely be going for a fish fry before too long!), and a friendly couple from Oshkosh. We had such a good time.

Seven years shall not pass before I attend another one of these. Also on my bucket list: a dinner by Outstanding In The Field! And a big outdoor dinner at my home for family & friends.

On Sunday, I did a few last-minute things at Ann's... 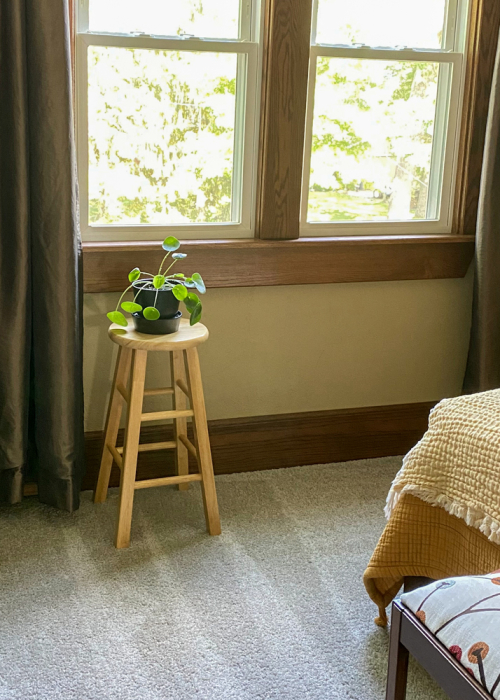 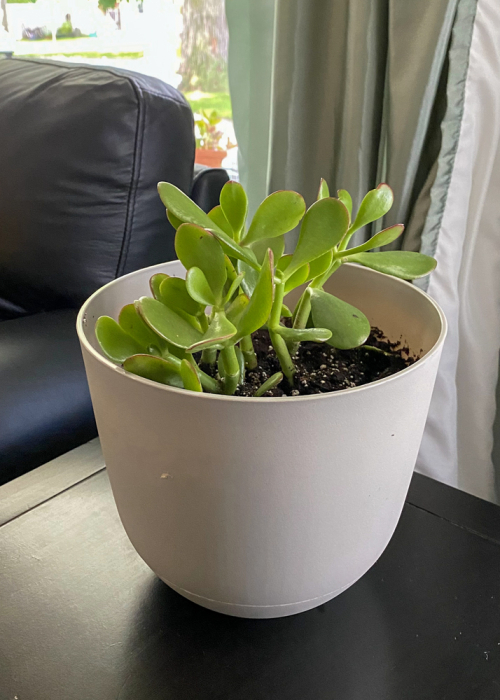 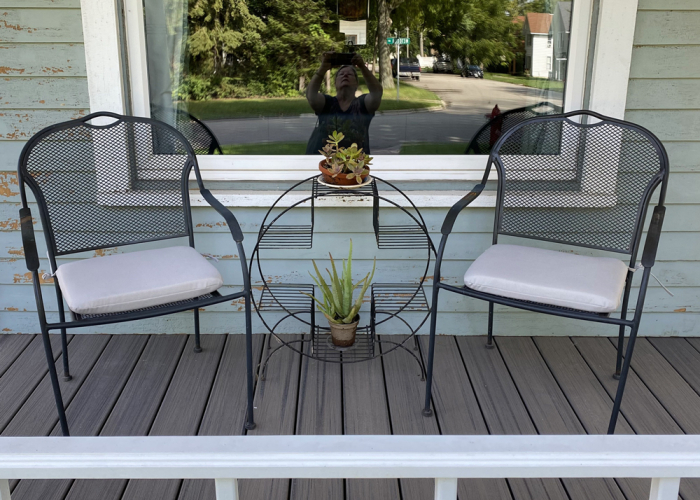 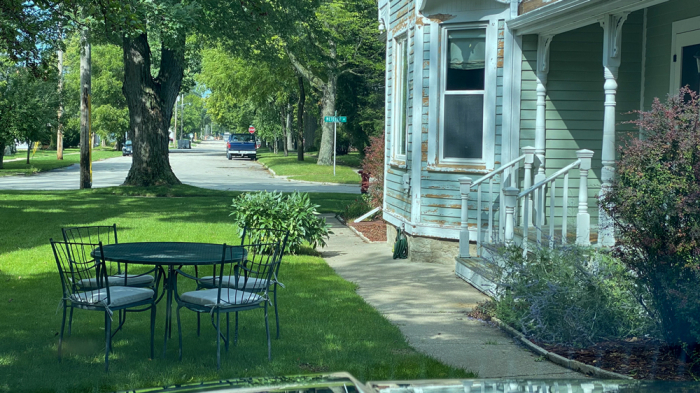 And situating the outside seating.

Other than that, I took the day off... except for doing the coffee shop payroll... and took a 2-hour nap!

I hope your last weekend of August was a good one, too!

What an amazing weekend! The food all looks simply delicious (and I'm off to look for a recipe approximating that carrot cream cheese galette) and your finishing touches on Ann's house are just perfect. Those first guests are very lucky and I hope next weekend is just as good for you!

Your weekend is a foodie heaven! Thanks for sharing all of those delicious things with us, my mouth is watering! I hope the AirBnb guests appreciate their lodging and you don't have any issues.

You got the latest AirB&B up and running in record time. Congratulations

I can't think of a more lovely way to wrap up the summer than a delicious meal at the farm! Sounds like a very full and fun weekend -- and like you more than earned that nap!

What a beautiful event at an incredible location! Wow! (and I was just talking to one of my kids about wanting some "greenery" in the house for the fall/winter)

Beet gazpacho also known as Borscht, is a favorite of mine. Your weekend sounds wonderful! The CSA dinner is so romantic looking. What a wonderful way to end your summer.

I'm sort of dying here. That farm dinner sounds absolutely marvelous! And it looked like absolute perfection, Vicki -- the setting, the sky-drama, the food. I'm so happy you were able to take part and enjoy. :-) And Ann's house looks so great. You did an amazing job whipping it into (beautiful) shape! What a wonderful retreat it will be for guests. (And . . . you make me wonder what in the heck I do with my time!!!) XO

What a fantastic dinner (thinking about Kitchens of the Great Midwest here) and love everything you've done at Ann's. Your nap was most definitely well-deserved!

Your farm country skies show off the drama of clouds! Having a perfect dinner under that canopy of blue would be heaven. You are a master at AirBnB beauty. You must never sleep as you get so much done. No wonder you need a nap here and there!