Does anybody know what time it is?
Unraveled Wednesday

I had a long weekend, so I can do that on Tuesday!

Much of Saturday was spent at Ann's, assembling dining chairs (8 of them!), doing laundry, getting one of the beds made up. Rusty helped me with another small piece of furniture and hanging artwork on Sunday -- it's a VERY eclectic mix that will undoubtedly change over time, but something's gotta be on the walls!

On Sunday afternoon I drove out and picked up Junah for an overnight. Man, did we have fun! Among other things, we played with LEGO and K'nex, had burgers on the grill, watched Despicable Me (he'd never seen it!), and learning to sew!

At first he wasn't too keen on the idea, but it didn't take much cajoling to get him to agree. Naturally, our first project was a pillowcase using the burrito method. 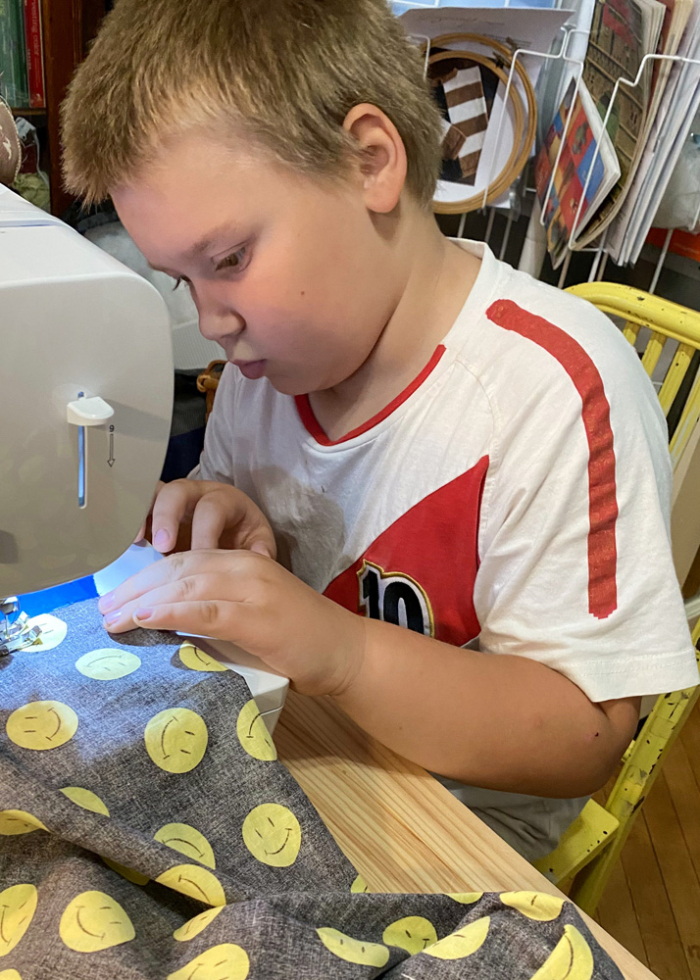 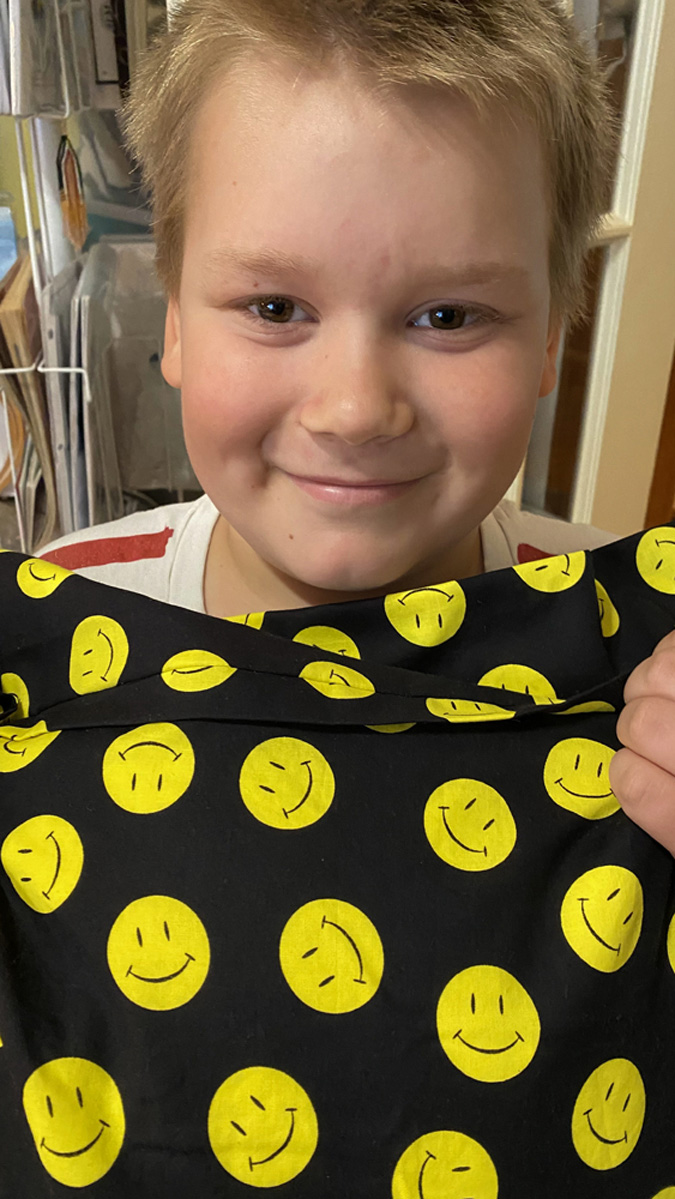 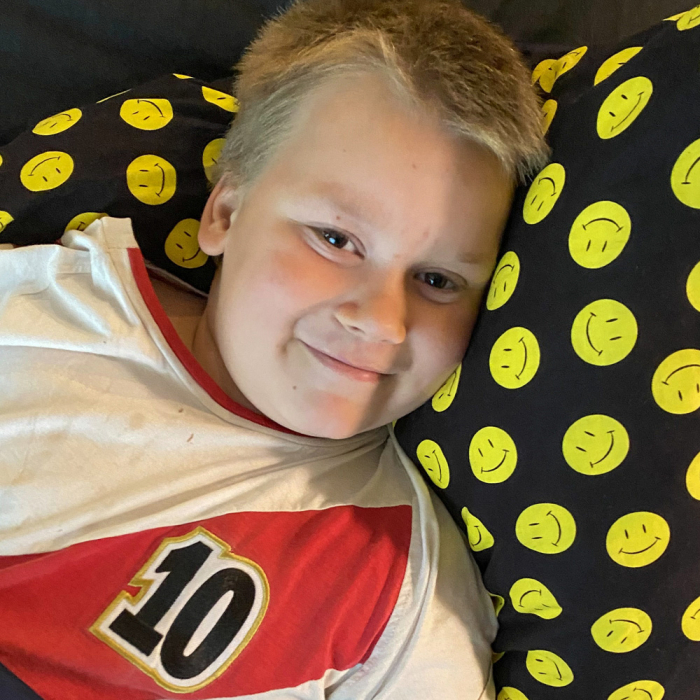 Smiles all around... he sure chose the perfect fabric! He told me that he'd done some sewing before, by hand, but it was his first time on a sewing machine. He did great, and really enjoyed unfurling the "burrito"! Lots of credit to the speed control on my Baby Lock; he also used the Start/Stop button instead of the pedal.

I see more pillowcases in the future -- possibly as soon as two weeks, when Ginny gets her turn for an overnight!

We also made an unplanned trip to the laundromat when my Airbnb guest showed up unannounced at my back door with an armful of bedding -- sheets, blanket, mattress pad, and topper -- and said that he spilled milk on the bed and it soaked through. Sheesh, I would normally have been at work. Anyway, that's a lot of unplanned laundry for an afternoon and the topper would never fit in my washer, so off we went. The topper is supposed to be "spot cleaned" but how do you spot clean a soaked-through spill... especially of milk? Yuck. It's lumpier than before, but should settle down. I do have extras of everything but the topper, but I wouldn't want all that stuff sitting around, anyway... did I mention SPILLED MILK?? haha. It's not all fun & games!

Ali brought the girls in yesterday afternoon and I took them to ballet & tumbling class! 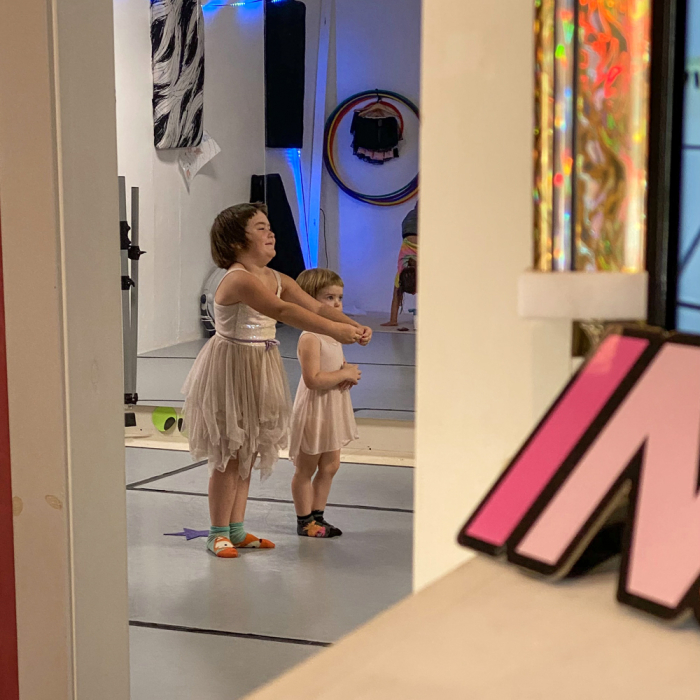 It's been a minute. Ginny's a much better listener at 5 than 3, and Malina did great at her first-ever class! Adorable

I love Junah's concentration and smile of accomplishment at that great pillowcase sewing project, and Ginny has a terrific smile. They are all adorable! (Except for that guest who may need a sippy cup.)

Um, if I was a guest and spilled on my bedding, I'd be washing it myself -- just saying! I loved seeing the video you posted of Junah on IG. He clearly took the sewing very seriously, and he should be very proud of himself for his successful project.

MILK???? On the bed???? Oh, brother. . .
That said, I love the look on Junah's face as he's concentrating with the sewing! Brian loved using the sewing machine when he was young. (Mind you, he loved the using the machine . . . not so much the sewing itself.) Such a great "first project!" Those pillowcases are magic.
And . . . I'm kinda melting here at Ginny and Malina at ballet. I still remember the darling videos of Ginny's first ballet classes. Look at her now!!!! XOXO

Junah at the sewing machine priceless. His smile when done says it all. The girls are so cute at dance class. Gin's smile and malina's concentration are so cute together.
What was the guest doing with milk in bed? Did he leave a security deposit? That could pay for another pad.
Putting toghether all those chairs is above and beyond sister job.
Enjoy the rest of your week.

that pillowcase is such a fantastic first project! so far, my guys have only helped with pinning and rolling and revealing the burrito method (I just love watching their faces for that reveal!) ... I think they might ready for sewing now! and gosh, it has "been a minute" how did Malina turn 3? (oh yeah, she has a little brother now, who's barely still a baby!)