One of the craziest weeks ever

I spun on a dime not once, but twice, and accommodated last-minute Airbnb guests at both Ann's house and mine.

On Tuesday, just as I walked into Knit Night after work, I got a weird message via the Airbnb app... which eventually became a booking request for four guests at Ann's... arriving between 8-9 p.m. Luckily, I'd prepared on Monday following another inquiry/possible booking (I originally planned on doing all of that on WEDNESDAY)! So all I needed to do was make a quick run to the grocery store, make sure everything was neat & tidy, and change the lockbox combination. 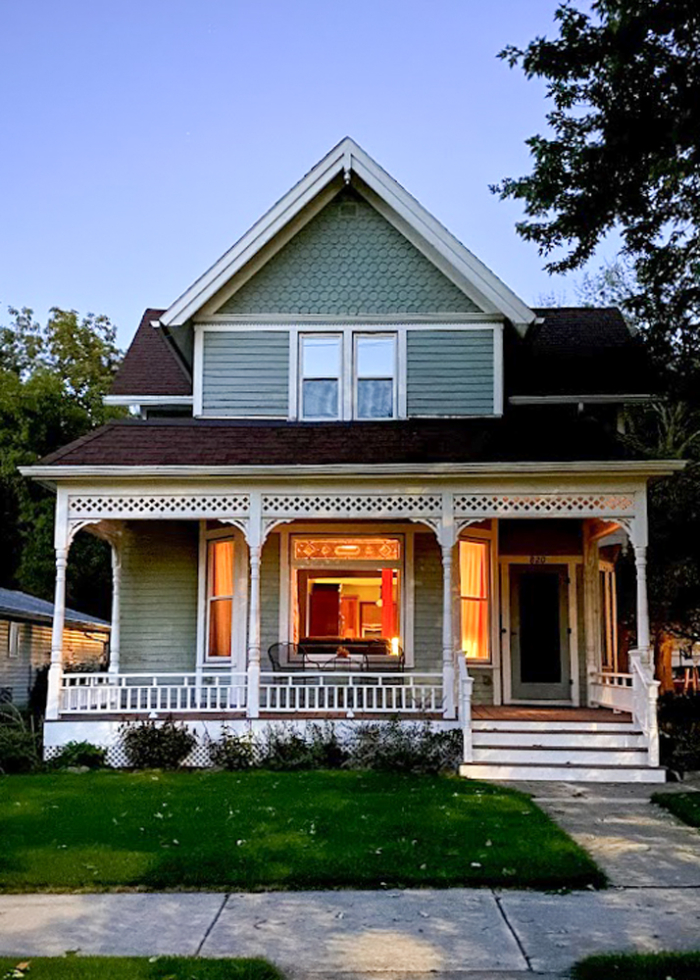 I left a few lights on when I left (it was way darker outside than it looks). It's got a nice glow. I can't wait for the new paint!

On Wednesday, I had a message from the guest that I was expecting in our apartment this weekend saying that he'd tested positive for Covid and wouldn't be able to travel (from PA). We worked through getting him rescheduled for a weekend in November... and I thought I had an unexpected free weekend.

HOLD UP! Yesterday, as I popped into my local antique mall after work, and I had another Airbnb "ding" -- right about 4:30 again -- a request for three to stay at my apartment, arriving in about an hour. I thought I was pretty prepared, so I accepted... turns out I had a little more than making a bed to do, but I did it! I met the first guest, Chase, when he arrived (they actually trickled in over about 12 hours), and turns out they work for a home improvement company. They're in the area because of a hail storm we had on Tuesday that caused some significant damage in places around here. I don't know if that's what brought Ann's guests, but I'm thinking so...

Wow! You are good at that being prepared/preparing for those last-minute guests. A Superb Super Host!

Nothing like a warm welcome in a comfortable place after travel. Way to go!

I honestly don't know how you do what you do! I would be exhausted just thinking about doing it all. You rock!!

You're amazing to get things ready for guests so quickly!

And this is why you are a super host!

Super Host!!! I had no idea you could obtain bookings on such short notice - kudos for accommodating!

WOW! That is quite a crazy week! You are a GREAT AirBNB host, Vicki -- especially to be able to accomodate that kind of quick turnaround for folks. BRAVO! :-) (We had hail here last week, too -- but just tiny hail. Up north, though???? CRAZY hail and tons of damage. Thankfully, all that we have to replace are our patio lights -- which were pummeled. So much hail damage up there. . . )

You are definately hostess with the mostness.
I'm sure they appreciated the hospitality.